Here we describe the experimental procedures involved in two-photon imaging of mouse cortex during behavior in a virtual reality environment.

In recent years, two-photon imaging has become an invaluable tool in neuroscience, as it allows for chronic measurement of the activity of genetically identified cells during behavior1-6. Here we describe methods to perform two-photon imaging in mouse cortex while the animal navigates a virtual reality environment. We focus on the aspects of the experimental procedures that are key to imaging in a behaving animal in a brightly lit virtual environment. The key problems that arise in this experimental setup that we here address are: minimizing brain motion related artifacts, minimizing light leak from the virtual reality projection system, and minimizing laser induced tissue damage. We also provide sample software to control the virtual reality environment and to do pupil tracking. With these procedures and resources it should be possible to convert a conventional two-photon microscope for use in behaving mice.

Two-photon imaging of calcium indicators (genetically encoded like GCaMP57 or R-GECO8, or synthetic dyes like OGB or Fluo4) has emerged as a powerful method of measuring neuronal activity in behaving mice1-6. It enables the simultaneous measurement of the activity of hundreds of cells at near-single action potential resolution, up to approximately 800 µm below the brain surface9,10. Moreover, using genetically encoded calcium indicators (GECIs) neuronal activity can be measured chronically5,11,12, and in genetically defined cell types13. Together, these methods provide a degree of temporal and spatial resolution that open up a multitude of new possibilities in the study of neuronal computation in vivo.

Surgical intervention is necessary to expose and label the mouse brain for imaging. Cells are typically transfected using a recombinant adeno-associated virus (AAV) system for GECI delivery and a cranial window is implanted over the injection site to gain optical access to the brain. A head bar is then attached to the skull for head fixation under the two-photon microscope. The design and implementation of these steps is critical as most of the problems with awake imaging arise from instabilities in the preparation. Ideally the procedure described here should allow for chronic imaging of up to several months following the surgery.

To enable visually guided behavior during two-photon imaging, the head fixed mouse sits on an air supported spherical treadmill, which it can use to navigate a virtual reality environment. Locomotion of the mouse on the treadmill is coupled to movement in the virtual environment that is displayed on a toroidal screen surrounding the mouse14,15. Behavioral variables such as locomotion, visual stimulus, and pupil position can be recorded6.

We describe the procedures involved in chronic two-photon imaging in mice exploring a virtual reality environment. The key points addressed are: reduction of movement artifacts, reduction of light leak, maximization of the number of simultaneously recorded cells, and minimization of photo damage. We also provide details on setting up the air-supported treadmill, pupil tracking, and the virtual reality environment. The procedures described here can be used for imaging fluorescently labeled cell populations in head fixed mice in a potentially wide variety of behavioral paradigms.

All animal procedures were approved and carried out in accordance with guidelines of the Veterinary Department of the Canton Basel-Stadt.

The injection of a calcium indicator20 and the implantation of the cranial window21 are performed as previously described with the following additions:

The image quality in two-photon calcium imaging of cell populations labeled with a GECI largely depends on the quality of the cranial window implant. Two weeks following virus injection the cranial window should be inspected for clarity. There should be no granulation tissue or bone regrowth visible (Figure 1A). Moreover, the pattern of superficial blood vessels should remain unchanged and boundaries of the vasculature should be sharply defined. At the same time, GECI expression can also be checked. Boli of labeled cells should be clearly visible under an epifluorescence microscope (Figure 1B).

Ideally the preparation is stable enough such that distortions of the two-photon images induced by locomotion of the mouse are not visible in the image after frame registration (Figure 2). The scan path of the resonant scanner is sinusoidal resulting in nonlinear image distortion. During the turnaround points data are not acquired due to image stretching in this part of the scan path. If the light source of the visual stimulation system, here the LEDs of the projector, is correctly timed to the turnaround points, light leak should only be apparent during this time (Figure 2). The flickering frequency of the light source has to be twice the scan frequency. Key to making this work are the fast rise and fall times of the LEDs and controlling electronics (Figure 3). 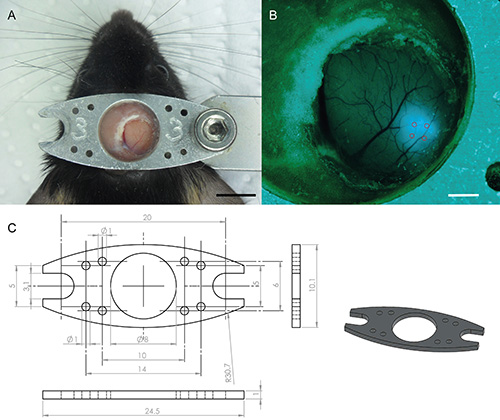 Figure 1. Top view of a cranial window in a head fixed mouse two weeks after surgery. (A) The head bar is optimized in weight and shape to increase stability for behavior during imaging experiments, while reducing burden on the animal. The head bar is made from aluminum and has a thickness of 1 mm. Scale bar is 5 mm. (B) Epifluorescence image of GCaMP5 expression after four injections (AAV2/1-EF1α-GCaMP5) of approximately 80 nl. The injection depth is approximately 400 µm. Scale bar is 1 mm. (C) Schematics of the head bar. All measurements in mm. Click here to view larger image.

Figure 2. Improving signal to noise by reducing light leak. The LED light source in the projector of the virtual reality environment is synchronized to the resonant scanner to turn on only during the scan turnaround periods when data are not recorded (orange boxes). The laser blanker was removed from the microscope for this example to illustrate the effect of light leak resulting from visual stimulation. The image (average of 8 sec of data) was taken in mouse visual cortex transfected with AAV2/1-EF1α-GCaMP5. Click here to view larger image. 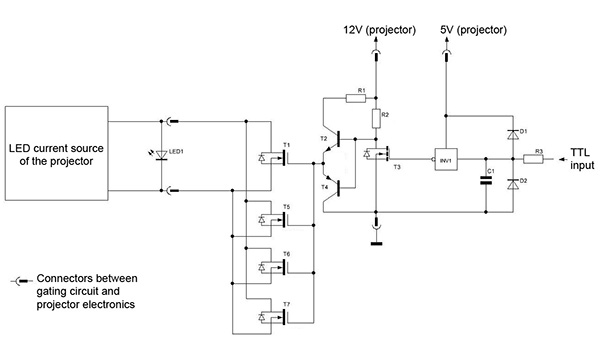 The key to the success of behavioral two-photon imaging is the stability of the preparation in two ways:

To minimize brain motion related imaging artifacts take care not to damage or remove the dura mater during the surgery. Remaining locomotion induced brain motion can be corrected for when motion is confined to the plane parallel to the imaging plane (the x/y plane). The maximum tolerable standard deviation of motion in x/y is roughly 5 µm. For motion along the z-axis this value is roughly 1 µm, such that the extent of the movement is smaller than the resolution limit of the microscope.

The low speed of the resonant scanner at the scan path turnaround points can lead to laser induced tissue damage. To prevent this, the laser can be blocked at the turnarounds using a blanker in the scan telescope. If this blanker is set correctly and average laser power under the objective is kept below 50 mW, imaging is possible for extended periods of time over multiple days without causing any visible laser damage. An alternative method to a mechanical blanking of the laser is to use a fast Pockels cell to reduce laser power at the turnarounds. This method however has the disadvantage that Pockels cells typically introduce undesirable beam distortions.

The aptitude of head fixed rodents to navigate virtual environments has made it possible to chronically image populations of cells in cortex of mice performing a wide range of behavioral tasks3,4,6,22. However, it is worthwhile to note that head-fixation inherently constrains behavior and locomotion on a spherical treadmill is in many ways not equivalent to unrestrained locomotion or normal behavior.

In the future, the strength of the virtual reality imaging approach described here will likely be the combination of calcium imaging with targeted optogenetic stimulation during behavior. With this it would be possible to optically manipulate presynaptic cells and image their post-synaptic targets while monitoring the resultant behavioral changes. In addition, as calcium indicators freely diffuse within the cell, it will also be possible to measure activity selectively in subcellular compartments during behavior. Due to movement induced brain motion, such recordings have been limited by the difficulty to obtain stable recordings.

This work was supported by the Friedrich Miescher Institute for Biomedical Research, the Max Planck Society, and the Human Frontiers Science Program. 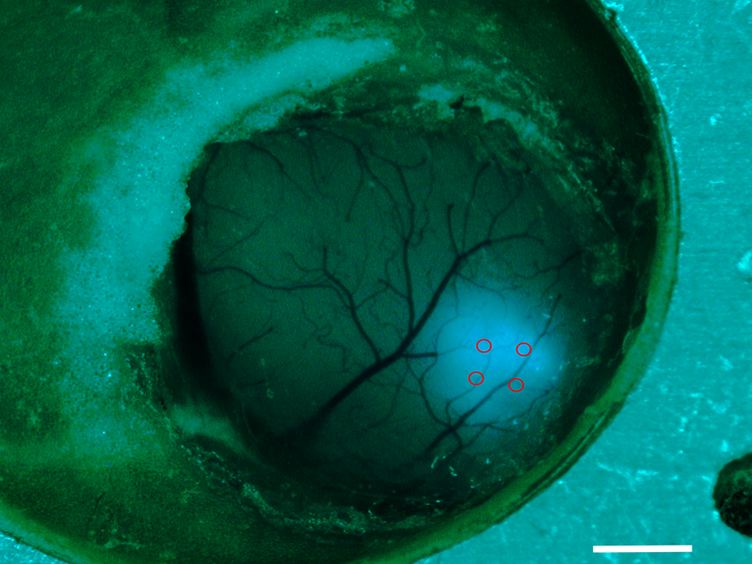