Agroinfiltration and PVX agroinfection are routine functional assays for transient ectopic expression of genes in plants. These methods are efficient assays in effectoromics strategies (rapid resistance and avirulence gene discovery) and crucial to modern research in molecular plant pathology. They meet the demand for robust high-throughput functional analysis in plants.

Agroinfiltration and PVX agroinfection are two efficient transient expression assays for functional analysis of candidate genes in plants. The most commonly used agent for agroinfiltration is Agrobacterium tumefaciens, a pathogen of many dicot plant species. This implies that agroinfiltration can be applied to many plant species. Here, we present our protocols and expected results when applying these methods to the potato (Solanum tuberosum), its related wild tuber-bearing Solanum species (Solanum section Petota) and the model plant Nicotiana benthamiana. In addition to functional analysis of single genes, such as resistance (R) or avirulence (Avr) genes, the agroinfiltration assay is very suitable for recapitulating the R-AVR interactions associated with specific host pathogen interactions by simply delivering R and Avr transgenes into the same cell. However, some plant genotypes can raise nonspecific defense responses to Agrobacterium, as we observed for example for several potato genotypes. Compared to agroinfiltration, detection of AVR activity with PVX agroinfection is more sensitive, more high-throughput in functional screens and less sensitive to nonspecific defense responses to Agrobacterium. However, nonspecific defense to PVX can occur and there is a risk to miss responses due to virus-induced extreme resistance. Despite such limitations, in our experience, agroinfiltration and PVX agroinfection are both suitable and complementary assays that can be used simultaneously to confirm each other's results.

Effectoromics, a high-throughput functional genomics approach has recently emerged as a powerful tool to identify resistance (R) genes in crop plants and matching avirulence (Avr) genes of pathogens1-4. In contrast to the more time-consuming stable transformation with R genes, the effectoromics strategy is based on transient assays of pathogen gene sequences.

Since the genomics era, genomes of plant pathogens have widely been explored. For example for oomycetes, which include the most devastating plant pathogens, large collections of sequences have been generated and analyzed for genes that play a role during the interaction with the plant5-10. One class of pathogen proteins represents effectors, which manipulate host cell structure and function either to facilitate infection (virulence factors) or to trigger defense responses (avirulence factors)11-13. Expression of Avr genes in plant cells containing R genes usually results in the hypersensitive cell death response (HR)14,15. In planta expression of R and Avr genes can be accomplished using transient expression systems such as Agrobacterium tumefaciens -based transient transformation (agroinfiltration)16. This transient transformation can also be applied in combination with viral expression systems (agroinfection)17,18.

For agroinfiltration, the most commonly used agent is A . tumefaciens, a broad host range pathogen of dicot plants. A . tumefaciens contains a tumor-inducing (Ti) plasmid. Transfer DNA (T-DNA) from a Ti plasmid will translocate into the plant cells after the virulence machinery of the bacterium is activated. This can be triggered in wounded plant cells, by the released low-molecular-weight phenolic compounds and monosaccharaides in a slightly acidic environment19. The virulence gene is activated after the infiltration of Agrobacterium suspensions into leaf panels defined by major veins. Then plant cells in the leaf panels will be transformed and express the transgene(s) contained in the T-DNA region.

Agroinfection is based on wound-inoculated Agrobacterium, which mediates translocation of a virus to plant cells. The virus then further spreads to adjacent plant tissues, in the absence of Agrobacterium. For agroinfection, several plant viruses can be used. RNA viruses are ideal vectors for gene expression because they can multiply to very high levels in infected plants. Among plant RNA viruses, Potato Virus X (PVX) is widely used for effectoromics screens. To facilitate functional tests for an inserted gene, binary vectors that contain the PVX genome flanked by the Cauliflower mosaic virus 35S promoter and the nopaline synthase terminator, were cloned into the T-DNA of A. tumefaciens20. After the T-DNA is transferred into plant cells, the PVX genome contained in the T-DNA is transcribed from the 35S promoter. Then virus particles spread systemically in the infected plants, resulting in the expression of the inserted gene. This method based on both Agrobacterium and PVX is called PVX agroinfection.

Here we show examples for both the agroinfiltration and PVX agroinfection assays. As host plants we use potato germplasm (Solanum section Petota), for which effectoromics approaches have been pioneered and proven successful3,4. We also use Nicotiana benthamiana, which is renowned as a model plant in Solanaceous plants14,21,22.

Figure 2 shows a range of scoring scales that can be used to quantify the response to agroinfiltrated Agrobacterium. Percentages of cell death are depicted on a scale 0-100%. Observed phenotypes range from macroscopically not visible symptoms (0%), through a range of intermediate responses displaying chlorosis and increasing levels of cell death, up to confluent cell death (100%).

Figure 3 shows a representative experiment after PVX agroinfection in potato. Normally, expanding cell death can be found at the sites about two weeks after tooth-pick inoculation. As shown in both figure panels, expanding cell death is present at the sites that were tooth-pick inoculated with pGR106-CRN2 (positive control using the effector crinkler Crn2), which is a general cell death inducing gene from P. infestans27. Apart from minor response to wounding, no expanding cell death is noted at the sites that were tooth-pick inoculated with the pGR106-empty (negative control). In Figure 3A, representing the potato genotype MaR3 (Mastenbroek R3), two pGR106-effectors (E1 and E2) did not induce cell death. In Figure 3B, a positive result of effector screening in the wild Solanum huancabambense 354-1 is presented; cell death response was observed to two pGR106-effectors (E1-E3, representing elicitins)28. 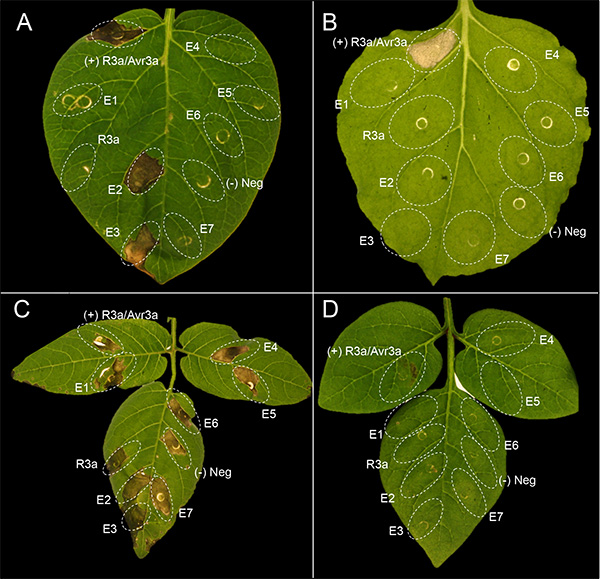 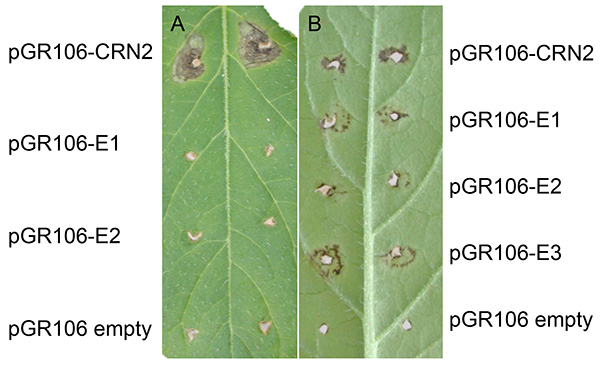 Table 2. Vectors and strains used for agroinfiltration and PVX agroinfection. Several binary vectors can be used. Vectors in the list below allow high expression of the candidate genes and have worked well in our hands. We prefer using the Agrobacterium strain GV3101(pMP90)29 in N. benthamiana and find AGL130 containing the helper plasmid pVirG (pBBR1MCS-5.virGN54D)23 more suitable in potato31. Additional strains have been analyzed in other groups on various model plants including N. benthamiana but not in potato32.

Transient assays like agroinfiltration and agroinfection are efficient methods that are vital to modern molecular plant pathology research. Despite some limitations, these methods meet the demand for efficient and robust high-throughput functional analysis in plants.

The agroinfiltration system is a widely used functional assay in a range of plant species. Agroinfiltration facilitates the delivery of several transgenes into the same cell with simultaneous expression of interacting proteins. This is advantageous for recapitulating R-AVR relationships, by coinfiltrating Agrobacterium strains that express Avr genes with strains that express the matching R genes. Also, for known R-AVR pairs, such coinfiltrations can be used as positive controls. Including such controls is important because in some plant genotypes, the transformation efficiency can be below the threshold to detect responses. Including negative controls, e.g. an Agrobacterium strain containing a vector without a gene insert, is also essential to determine whether a certain plant genotype raises nonspecific defense responses to the Agrobacterium. This feature occurs at a certain frequency in potato germplasm, and not all Solanum species are well suitable for this Agrobacterium-based expression system. Generally, the agroinfiltration assay works very well in N. benthamiana and most potato genotypes. In addition to effectoromics, there are various other potential applications for the agroinfiltration technique, such as production of proteins from transgenes and protein localization in plant cells by confocal microscopy.

PVX agroinfection is a highly sensitive screening system and typically more suitable for high-throughput screenings. Since the Agrobacterium is now only locally present, nonspecific responses to this bacterium are now not very disturbing, as the PVX virus takes over further spread of the transgene. However, plants may be resistant to PVX, or mount extreme resistance (ER) responses, and in that case the agroinfection method is not suitable. Another limitation of the PVX agroinfection method is the insert size of the gene of interest. Observed phenotypes of responses may vary from an intense black necrosis surrounding the wound to faint necrosis near the inoculation spot. In both N. benthamiana and Solanum species, PVX agroinfection is recognized as more sensitive than agroinfiltration.

Keeping into account that the genetic background of the diverse tested plant genotypes can have some restrictions (see above), we generally obtain similar conclusions by PVX agroinfection and agroinfiltration. These results are also comparable as obtained in other assays, such as protein infiltrations29 and ELISA3. Considering the advantages and limitations of both systems, we recommend using both methods to either complement each other or confirm independent results.