The cancer stem cell (CSC) model has been considerably revisited over the last two decades. During this time CSCs have been identified and directly isolated from human tissues and serially propagated in immunodeficient mice, typically through antibody labeling of subpopulations of cells and fractionation by flow cytometry. However, the unique clinical features of prostate cancer have considerably limited the study of prostate CSCs from fresh human tumor samples. We recently reported the isolation of prostate CSCs directly from human tissues by virtue of their HLA class I (HLAI)-negative phenotype. Prostate cancer cells are harvested from surgical specimens and mechanically dissociated. A cell suspension is generated and labeled with fluorescently conjugated HLAI and stromal antibodies. Subpopulations of HLAI-negative cells are finally isolated using a flow cytometer. The principal limitation of this protocol is the frequently microscopic and multifocal nature of primary cancer in prostatectomy specimens. Nonetheless, isolated live prostate CSCs are suitable for molecular characterization and functional validation by transplantation in immunodeficient mice.

Intratumoral heterogeneity is considered to be a hallmark of cancer1. Indeed, several mechanisms of intratumoral heterogeneity have been described, including genetic mutation and interactions with the microenvironment. In addition, some cancers may contain a cellular hierarchy with a subpopulation of cancer stem cells (CSCs) that exhibits the properties of tumor-initiating capacity and self-renewal in serial transplantation assays2-5. Initially described in hematological6, breast7, and brain8 malignancies, CSCs have also been studied in prostate cancer9-12 as well as other tumor types2-5.

CSCs are generally considered a cellular fraction within a heterogeneous population2-5. Therefore, the functional and molecular characterization of CSCs is contingent upon their enrichment from bulk populations. Accordingly, during the last two decades several methodologies of CSC enrichment have been devised which typically involve the separation of labeled populations by flow cytometry. In addition, a significant consideration in the study of CSCs is that the hierarchical organization of human tissues may be disrupted by experimental manipulations such as serial passaging in culture or immunodeficient mice. As a result, the direct isolation of CSCs from human tissues has emerged as an important methodology in the CSC field.

Prostate cancer is a leading cause of cancer morbidity and mortality in the United States and around the world13. Therefore, the isolation and biological characterization of prostate CSCs is of significant interest. Prostate CSCs have previously been enriched from cell lines, patient derived xenografts, and low passage patient derived suspension cultures9,10,12,14.

We recently reported the isolation of prostate CSCs directly from human surgical samples by virtue of their HLAI-negative cell surface phenotype10. Here we detail the procedures implemented for the isolation of these cells. Prostate tumors are harvested from surgical specimens and made into cell suspensions. Cells are then stained using antibodies against HLAI as well as stromal and viability markers, and CSCs are isolated by fluorescence activated cell sorting (FACS). Isolated CSCs can then be used for assays requiring viable cells.

3. Antibody Staining of Cells for FACS

4. Isolation of Prostate CSCs by FACS 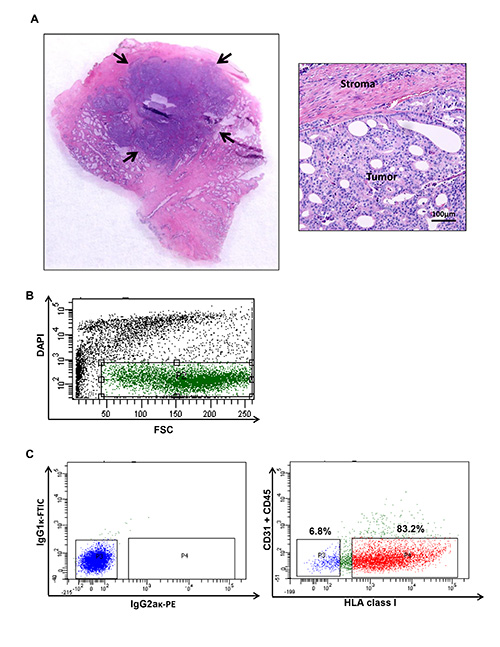 Figure 1. Human prostate cancer tumor harvesting and flow cytometry plot illustrating specific populations from a human prostate cancer. (A) Tumor nodules are harvested to generate a cell suspension. Tumor content of the processed sample is confirmed using conventional Hematoxylin and Eosin staining. (B) Cells staining positively for DAPI are excluded to isolate only viable cells. (C) HLAI-negative gate is created based on cells stained with control isotypic IgG1κ-FITC and IgG2aκ-PE antibodies. The percentage of HLAI-negative and HLAI-positive cells are shown in the gate. Please click here to view a larger version of this figure.

This protocol describes the isolation of CSCs from fresh human prostate cancer tissues. Several important considerations influence the successful outcome of this protocol.

The recovery of high numbers of viable prostate cancer cells is dependent on careful gross assessment of surgical samples. In our experience, the successful isolation of tumorigenic prostate cells is best assured when macroscopic tumor nodules are observed and processed10.

However, nowadays primary disease derived from prostatectomy specimens is frequently multifocal and microscopic. In these cases, when possible sample processing should be informed by previous clinical biopsy results in order to increase the chance of harvesting prostate cancer cells. In our experience, it is necessary for well-trained laboratory personnel to perform the protocol frequently in order to assure the successful isolation of prostate CSCs from multiple clinical prostatectomy samples.

Additionally, since we describe here a negative selection protocol involving cell surface HLAI expression, it is important to remove potentially contaminating HLAI-negative elements from the prostate cancer cell suspensions processed by FACS. In particular, the use of red blood cell lysis buffer and the omission of nonviable cells by DAPI staining are significant considerations. While these measures may not guarantee that nonprostate cancer cells do not contaminate the HLAI-negative population, our previous limiting dilution studies suggest that prostate CSCs are nonetheless efficiently enriched in this compartment10.

Finally, the isolation of live cells enables their functional characterization, for example their capacity to efficiently initiate xenografts in immunocompromised mice, among others. Molecular studies, including expression profiling, are also achievable.

This work was supported by the Hariri Family Foundation and the TJ Martell Foundation. 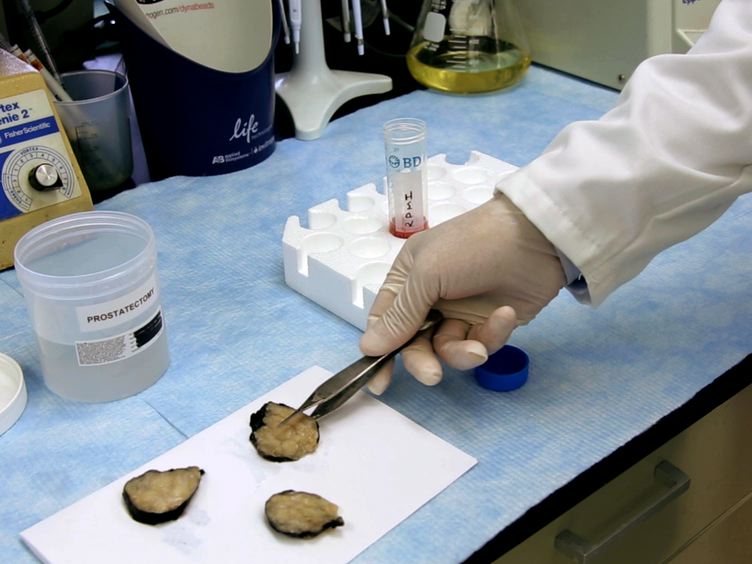