We report a procedure to isolate RNA with high integrity from the ribonuclease rich mouse pancreas.

Isolation of RNA with high integrity is required for routine molecular biology experiments such as northern blotting 9, qRT-PCR 1 or gene expression profiling 5. Most contemporary methods of RNA isolation are based upon modifications of the guanidine thiocyanate protocols 2, 3. Guanidine thiocyanate is a strong protein denaturant and will effectively disrupt the activity of ribonuclease under most conditions. The popular method of Chomczynski and Sacchi 3 combined phenol to the guanidine thiocyanate lysis solution, reducing the isolation time to about 4 hr. Many commercially-available RNA extraction reagents are based upon the Chomczynski and Sacchi method 3.

Ribonuclease rich tissues such as human or mouse pancreas presents an additional challenge for isolating RNA. Mouse pancreas may contain up to 75 mg of ribonuclease 6 some of which will be released during disruption of the pancreatic tissue resulting in tissue autolysis. Modifications of the guanidine thiocyanate protocols have been successfully used to isolate RNA from pancreas with high integrity 2, 4, 7, 10. Infusion of RNA stabilization reagent into mouse pancreas facilitated isolation of RNA with high integrity 4, 7, 10, however infusion of solutions into the pancreas requires great skill, may require specialized instruments such as a dissecting microscope and disrupting tissue architecture during the procedure may result in cell lysis. Perfusing tissue with RNA stabilization reagent might interfere with other applications including protein isolation and histological staining. Furthermore, this technique is not suitable for isolating RNA from human pancreas. Other protocols require the preparation of specific solutions by the investigator 2.

We report a protocol to isolate RNA with high integrity from mouse pancreas. The protocol uses elements of previously published methods and is largely based upon the standard phenol/guanidine thiocyanate-based lysis reagent protocols. It does not require the preparation of specialized solutions nor does it require infusion of reagents into the pancreas. Critical steps for successful RNA isolation include a high phenol/guanidine-based lysis reagent to tissue ratio, removal of undigested tissue prior to phase separation and inclusion of a ribonuclease inhibitor to the resulting RNA solution. Using these and other modifications, we typically isolate RNA with RIN greater than 7 to be used for routine gene expression analysis.

The following practices adhere to the policies set by the Institution’s Animal Care and Use Committee (IACUC).

Note: Following homogenization, small bits of tissue will remain in the lysis reagent. It is more important to quickly lyse the tissue leaving some tissue undigested rather than over homogenizing and risk degradation of RNA.

4. Cleaning of the Homogenizer Blades

The total RNA yield from 1 ml of lysis homogenate is 20-40 µg. OD 260/280 ratios are typically around 2.0 and the RIN are consistently greater than 7.0. If the RIN is ≤6, the isolation will need to be repeated. Occasionally, a RIN that is higher than 8.0 is achieved.

For some experiments, it may be necessary to collect both RNA and protein from the same pancreas. For example, RNA may be used for qRT-PCR and protein may be visualized using immunohistochemistry. If this is the case, it is recommended to cut the pancreas in half from head to tail. This is important since the pancreas differs anatomically from head to tail. To demonstrate if any differences in the RNA integrity exists between RNA isolated from either half of the pancreas, the following experiment was done. RNA was isolated from the first half of the pancreas. The RIN determined from this RNA was compared to that of RNA isolated from the second half of the pancreas after it sat at RT for about 30 sec during the workup of the initial half. The RIN for the initial half of pancreas was 7.4±0.20 compared to a RIN of 6.9±0.55 for the subsequent half. While cutting the pancreas in this manner does not appear to release ribonuclease and digestion of RNA, if the pancreas is to be sectioned, it is recommended to use the first half for RNA analysis and the second half for protein.

To demonstrate the usefulness of this method, we performed qRT-PCR on the isolated RNA. The mean RIN from triplicate RNA isolations was 7.4±0.20 (mean±SD). Random primed cDNA was synthesized from the RNA and the expression of three housekeeping genes was measured by qPCR using standard techniques. The data shown in Figure 3 validates our ability to successfully use mouse pancreatic RNA in a standard molecular biology technique. 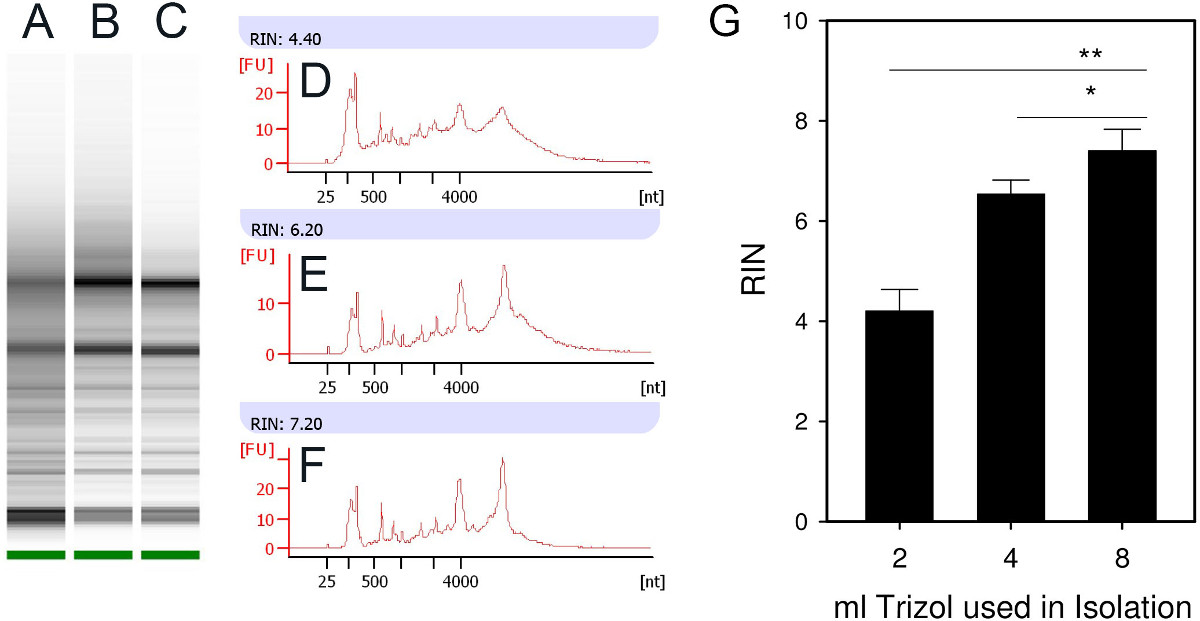 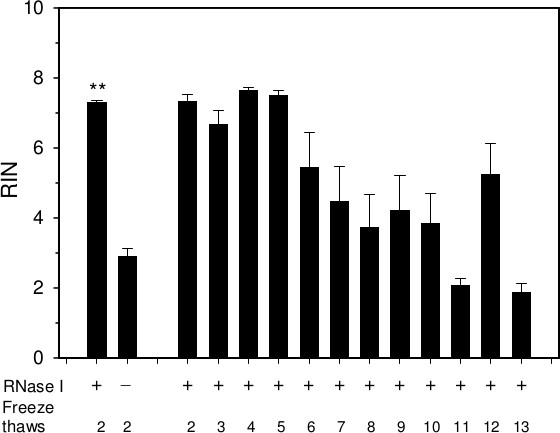 Figure 2. RNA eventually degrades upon repeated freeze thawing. RNA isolated from mouse pancreas was repeatedly frozen and thawed in the presence or absence of ribonuclease inhibitor (RNase I). Mean±SEM, **p<0.001. 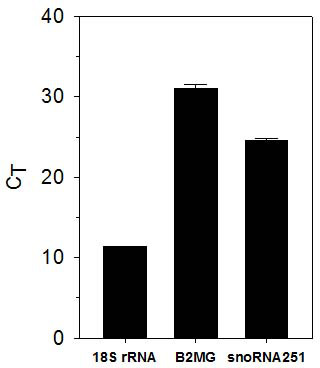 Standard guidelines for isolating RNA are to be noted. These techniques are critical to successful isolation of RNA, even from specimens that are less ribonuclease-rich than pancreas. Some examples include using molecular biology grade water, ribonuclease-free consumables and disposable plastic ware rather than glass. It is recommended to change gloves in between each isolation. For someone who is inexperienced with isolating RNA, it is recommended that they gain experience with isolating RNA from ribonuclease-poor samples such as liver or from cell cultures prior to embarking on work that requires isolating RNA from pancreas. Excellent protocols exist that offer a variety of points for successfully working with RNA 8.

Several important factors for isolating RNA with high integrity from mouse pancreas are reported here. These include the volume of lysis reagent used during the homogenization and the inclusion of a ribonuclease inhibitor to the RNA solution. The method of including the ribonuclease inhibitor works well, however repeated freeze thaw cycles will eventually reduce the RIN, likely due to denaturing the ribonuclease inhibitor. It should be noted that all RNA solutions used in this study went through one freeze thaw prior to RIN determination. Another method of reducing degradation upon freeze thaw is to store the RNA solution at -20 °C in a precipitated form 2. This offers some inconveniences namely removing the ethanol and re-dissolving the pellet prior to using the RNA. Compared to the phenol/guanidine thiocyanate reagent protocols 2, advantages of the protocol reported here is the simplicity of working with lysis reagent and the purification kit that do not require preparation of specialized solutions and buffers. It should also be noted that this protocol has been successfully used to isolate small RNAs from mouse pancreas.

Additional tips include the speed of pancreas dissection and the method of anesthesia prior to euthanasia (isoflurane inhalation is preferred to CO2 asphyxiation). Several attempts at practicing the pancreas surgery are recommended before anticipating high quality RNA. Adaptation of this protocol to ribonuclease-rich tissues such as the spleen or lungs should be readily achievable.

We thank Jianhua Ling, Raymond MacDonald, Galvin Swift, Michelle Griffin, Paul Grippo and Satyanarayana Rachagani for their helpful comments, suggestions and sharing of their protocols. This work was supported by grant U01CA111294 and an Idea Development Award from the Ohio State University Intramural Research Program. 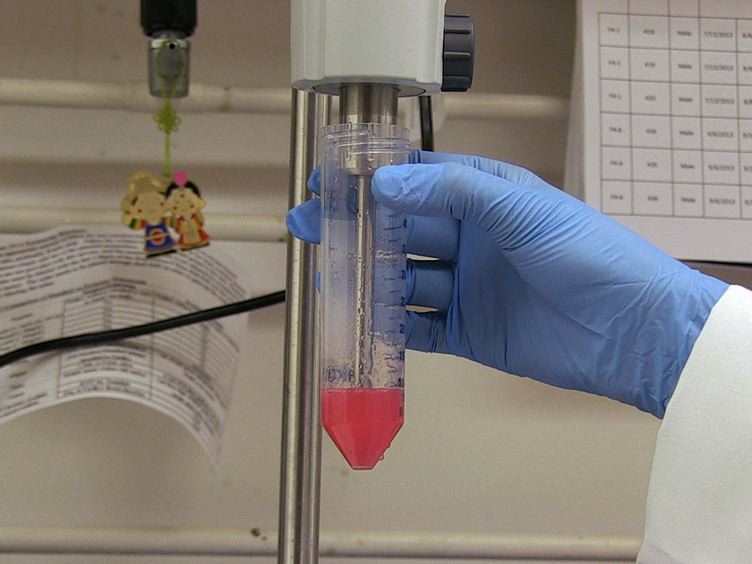