Astrocytes display spontaneous intracellular Ca2+ concentration fluctuations ([Ca2+]i) and in several settings respond to neuronal excitation with enhanced [Ca2+]i signals. It has been proposed that astrocytes in turn regulate neurons and blood vessels through calcium-dependent mechanisms, such as the release of signaling molecules. However, [Ca2+]i imaging in entire astrocytes has only recently become feasible with genetically encoded calcium indicators (GECIs) such as the GCaMP series. The use of GECIs in astrocytes now provides opportunities to study astrocyte [Ca2+]i signals in detail within model microcircuits such as the striatum, which is the largest nucleus of the basal ganglia. In the present report, detailed surgical methods to express GECIs in astrocytes in vivo, and confocal imaging approaches to record [Ca2+]i signals in striatal astrocytes in situ, are described. We highlight precautions, necessary controls and tests to determine if GECI expression is selective for astrocytes and to evaluate signs of overt astrocyte reactivity. We also describe brain slice and imaging conditions in detail that permit reliable [Ca2+]i imaging in striatal astrocytes in situ. The use of these approaches revealed the entire territories of single striatal astrocytes and spontaneous [Ca2+]i signals within their somata, branches and branchlets. The further use and expansion of these approaches in the striatum will allow for the detailed study of astrocyte [Ca2+]i signals in the striatal microcircuitry.

Astrocytes are ubiquitous and abundant glial cells of the brain. It is well established that astrocytes serve vital support and homeostatic roles including buffering of K+ concentration in the extracellular space, uptake of neurotransmitters as well as providing nutrients. However, recent studies show that they also display [Ca2+]i signals, which occur spontaneously and are increased by neuronal activity1. The existence of astrocyte [Ca2+]i signaling has been increasingly thought to trigger their communication with neurons, and as such has been interpreted as a form of “Ca2+ excitability” within astrocytes. The available data over the last two decades suggest two settings in which astrocytes and neurons may communicate, perhaps in a bidirectional manner. First, astrocytes often respond with an increase in [Ca2+]i when activated by neurotransmitters and neuromodulators released from neurons2. Second, [Ca2+]i increases within astrocytes cause the release of signaling molecules from astrocytes that in turn may affect neurons and blood vessels. Evidence suggests that molecules released from astrocytes lead to changes in the functions of synapses, circuits and ultimately behavior3-5 via astrocyte-to-neuron signaling. However, this remains a rapidly developing research area, and it has been argued that a better and detailed understanding of astrocyte [Ca2+]i is needed to resolve some of the current uncertainties6.

In past work, it was demonstrated that bulk loading of organic Ca2+ indicator dyes into astrocytes fails to reliably detect [Ca2+]i signals within entire astrocytes in culture and in situ7-10. These findings have been discussed by us and others6,11,12. The emerging picture is that [Ca2+]i signals within astrocyte processes (e.g., branches and branchlets), which are the primary sites for interactions with neurons and blood vessels, have rarely been explored in detail. Recently, the use of genetically encoded calcium indicators (GECIs) such as cytosolic GCaMP3, GCaMP5G and GCaMP6 and plasma membrane tethered versions (e.g., Lck-GCaMP3) has permitted the study of [Ca2+]i signals in small compartments of astrocytes such as thin processes, near the plasma membrane and within entire territories7,8. However, GECIs have one disadvantage over organic Ca2+ indicator dyes and that is the requirement for genetic methods to deliver the encoding genes selectively to astrocytes in vivo for periods of weeks for the GECIs to be appropriately expressed. Expression in vivo is typically achieved using transgenic mice, knock-in mice or with virus based delivery approaches. In the present JoVE article we report methods and procedures employed to deliver GECIs to striatal astrocytes using adeno-associated viruses. We focus on cyto-GCaMP3 as an example, but the same basic procedure works for any other GECI or fluorescent protein based reporter.

All animal protocols were in accordance with the US National Institutes of Health Guide for the Care and Use of Laboratory Animals and were approved by the Institutional Animal Care and Use Committee at UCLA.

2.1) Preparation of Cutting and Recording Solutions.

NOTE: [Ca2+]i imaging was done using a confocal microscope with a 40X water immersion objective lens with a numerical aperture of 0.8.

We next prepared acute brain slices from virus injected mice to image [Ca2+]i in striatal astrocytes. Acute 300 μm thick sagittal or coronal slices were prepared, and after a period of recovery the slices were placed in a recording chamber on a confocal microscope for [Ca2+]i imaging using the 488 nm line of an Argon laser. Striatal astrocytes expressing cyto-GCaMP3 could easily be identified in most (usually all) of the striatal slices (~6 - 7 slices per mouse), as they showed visible green fluorescence in cells with clearly bushy morphology (Figure 4). A typical 5 min recording at 1 Hz from a representative field is shown in Figure 4A; at least 10 astrocytes displaying cyto-GCaMP3 could be imaged and are plotted in Figure 4A as Regions of Interest (ROI). Higher magnification imaging with an additional digital zoom of 2.0 - 3.0 was necessary to identify single astrocytes (Figure 4B). Under these circumstances, entire astrocyte territories were revealed by cyto-GCaMP3 expression, as shown in Figure 4B. Spontaneous Ca2+ signals were easily measured in the somata as well as in the branches and branchlets of astrocytes6. 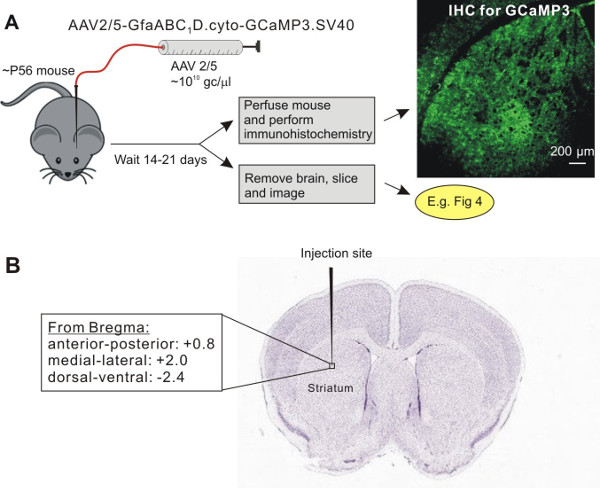 Figure 1: Viral delivery of GECIs (e.g. cyto-GCaMP3) by AAV2/5 into the adult mouse striatum. A. Schematic illustrates the protocol for AAV2/5 microinjections into the dorsolateral striatum. B. Shows the approximate position of the microinjection needle in relation to the striatum and the coordinates used for stereotaxic injections. The image of a Nissl-stained slice in panel B was downloaded from ALLEN BRAIN ATLAS. 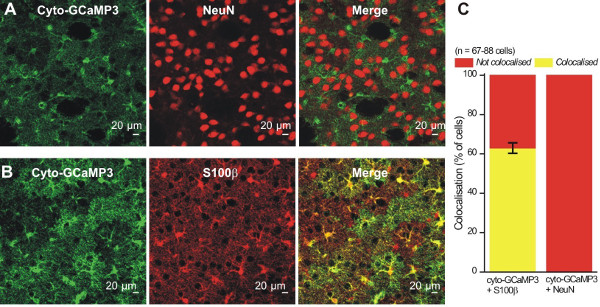 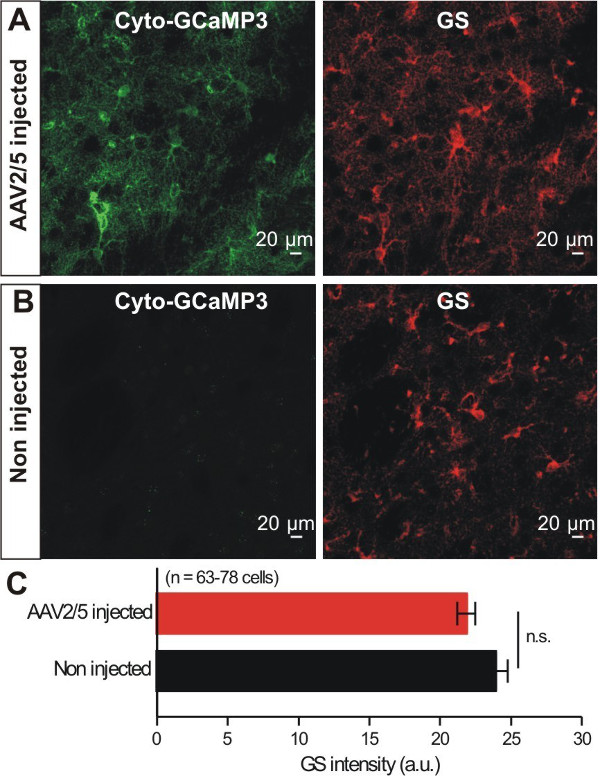 Figure 3: Cyto-GCaMP3 expression within striatal astrocytes did not cause changes in the expression of GS. A - B. Representative images of GCaMP3 and GS IHC from mice that had received AAV2/5 for GCaMP3. Images for control non injected mice are also shown. C. Bar graph summarizes results from experiments such as those in A and B (n.s. indicates not significant using an unpaired Student’s t test, p <0.05). 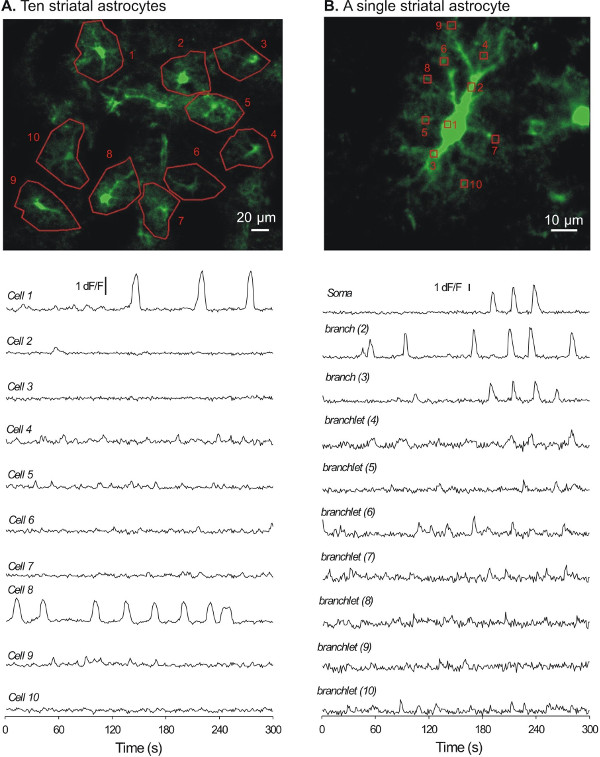 The methods described herein have allowed us to express cyto-GCaMP3 in striatal astrocytes in vivo for subsequent [Ca2+]i imaging in situ. This method has advantages over using transgenic or knock-in mice, including robust expression of the targeted protein, rapidity and flexibility of experimental implementation and anatomical specificity. The expression of GCaMP3 using AAV2/5 was found to be specific and robust. The combination of GFAP GfaABC1D promoter with AAV of the serotype 5 is critical to achieve the specificity. One limitation of the technique described here is that virus infection and surgery procedure may cause astrocyte reactivity, especially with high-titer viruses19. Importantly, in the current study, AAV2/5 microinjections with a relative low titer did not cause decreases in GS that have been associated with astrocyte reactivity19. Similar controls have been reported for hippocampal astrocytes8. However, it is important to emphasize the necessity of these controls for each brain area to be studied, not least because astrocytes are heterogeneous20, and because they likely perform different functions in distinct regions of the brain.

One of the important factors that may affect the robustness of the targeted gene expression using virus microinjection is the coordinates in use, which varies among different mouse strains and changes over the development of the animals. Only C57BL/6 mice of ~8 weeks old were used throughout this study. It has been also shown that viral expression of GFP in striatal neurons and astrocytes in rats could be detected 4 days post injection, reached a plateau by 2 - 4 weeks post injection, and then remained stable for 9 months post injection 21. The time course of cyto-GCaMP3 expression has not been precisely determined here, but at least two weeks for virus expression are recommended. 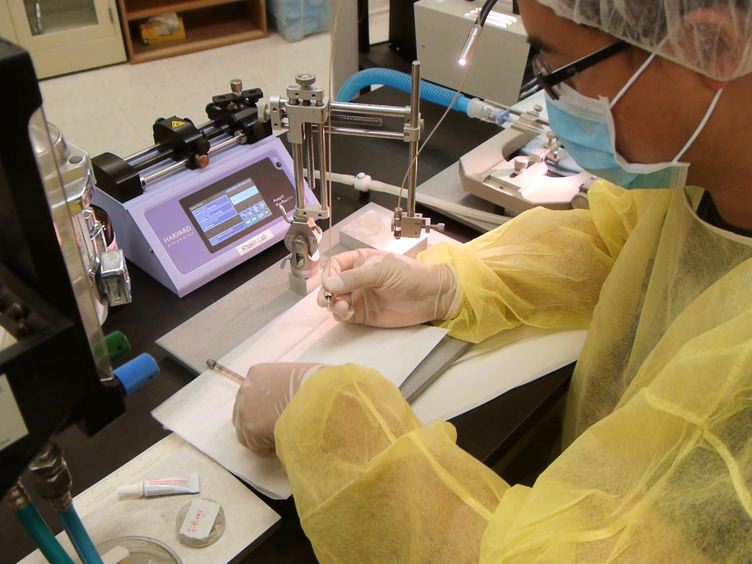