Gene expression analysis of a subset of cells in a specific tissue represents a major challenge. This article describes how to isolate high-quality total RNA from a specific cell population by combining a rapid immunolabeling method with laser capture microdissection.

Laser capture microdissection (LCM) allows the isolation of specific cells from thin tissue sections with high spatial resolution. Effective LCM requires precise identification of cells subpopulations from a heterogeneous tissue. Identification of cells of interest for LCM is usually based on morphological criteria or on fluorescent protein reporters. The combination of LCM and rapid immunolabeling offers an alternative and efficient means to visualize specific cell types and to isolate them from surrounding tissue. High-quality RNA can then be extracted from a pure cell population and further processed for downstream applications, including RNA-sequencing, microarray or qRT-PCR. This approach has been previously performed and briefly described in few publications. The goal of this article is to illustrate how to perform rapid immunolabeling of a cell population while keeping RNA integrity, and how to isolate these specific cells using LCM. Herein, we illustrated this multi-step procedure by immunolabeling and capturing dopaminergic cells in brain tissue from one-day-old mice. We highlight key critical steps that deserve special consideration. This protocol can be adapted to a variety of tissues and cells of interest. Researchers from different fields will likely benefit from the demonstration of this approach.

The brain is composed of a large variety of different neuron types forming complex networks. These neurons are organized in distinct groups and subgroups according to their morphology, connectivity and gene expression pattern1. The development of microarrays, next-generation sequencing, and qRT-PCR offered the possibility to compare gene expression profiles of neuronal populations in different biological contexts1,2. These sensitive analyses require the precise identification and isolation of cell types of interest while keeping RNA integrity2-4. Fluorescent activated cell sorting (FACS) technique has been widely used to isolate specific cell types based on cell-surface markers and/or morphology. FACS requires a cell dissociation step prior to sorting, which results in a complete loss of spatial resolution5. Many neuronal subpopulations are distinguished from one another according to their anatomical distribution in the brain. Laser capture microdissection applied on thin brain sections provides an appropriate option for specific isolation of cells with high spatial resolution6-8. A major limitation of LCM has been the need to identify cells of interest based on morphological criteria or on fluorescent protein reporters genetically engineered in animal models. The development of new techniques to perform quick immunolabeling methods that preserved RNA integrity, in combination with LCM, now allows the isolation of cell subpopulations to proceed with gene-profiling experiments.

This approach has been previously performed and briefly described in few publications1,9-13. Here, we demonstrate a detailed procedure to obtain high-quality RNA from a specific subset of cells in a complex tissue structure by combining quick immunolabeling with LCM. We show how to perform key critical steps to obtain maximal RNA recovery and avoid RNA degradation as it may significantly impact gene expression profiling.

For the demonstration of this protocol, dopaminergic neurons from one-day-old mouse midbrain were targeted. Dopaminergic neurons can be immunolabeled using an antibody directed against tyrosine hydroxylase (TH), the rate-limiting enzyme for dopamine synthesis. Following TH immunostaining, individual or groups of dopaminergic neurons can then be isolated using LCM. Microdissected cells are collected in the lysis buffer, and RNA is extracted using a RNA isolation kit. Quality and quantity of extracted RNA are measured using a bioanalyzer5. Further analysis of gene expression using: RNA sequencing, microarray, or qRT-PCR can subsequently be performed2,4,6. As an example, a two-step qRT-PCR is demonstrated on the laser captured isolated dopaminergic domains. Relative quantification of expression levels of two dopaminergic neuron marker genes illustrates the selectivity of this protocol.

NOTE: The experiments were performed in accordance with the Canadian Guide for the Care and Use of Laboratory Animals and were approved by the Université Laval Animal Protection Committee.

NOTE: In this example, we used mouse brains at postnatal day 1.

This rapid immunolabeling procedure allows visualization of cells of interest while keeping RNA integrity. Figure 1 illustrates the steps of tissue preparation before RNA extraction. After cryosectioning, dopaminergic neurons are labeled using an antibody directed against the tyrosine hydroxylase (labeled neurons appear in brown). Depending of the experimental question, single cells or larger region of interest can be isolated using LCM (Figure 1D-E). It is important to assess the quality of RNA extracted, as degraded RNA will have a considerable impact on the quality of the following analysis. Each sample is thus processed on a microfluidics-based platform bioanalyser for quantification and to check RNA integrity. Figure 2 shows typical bioanalyser results of degraded and good-quality samples. Both digital gel and electropherograms demonstrate the importance of using RNAse inhibitor in each solution to protect RNA. The expected amount of RNA extracted from 500 neurons is around 1-2 ng. Microdissected cells from several tissue sections can be pooled in the same tube to increase RNA quantity. 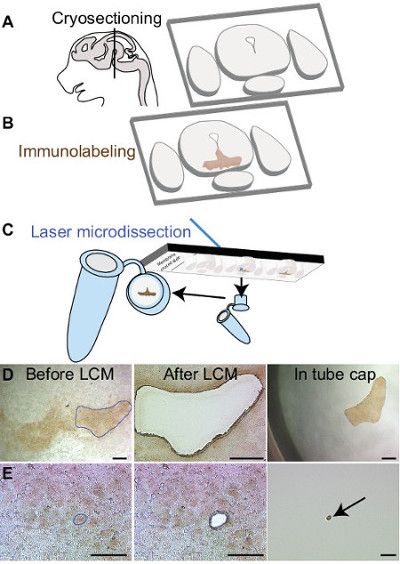 Figure 1: Rapid immunolabeling and laser capture microdissection procedure. (A) Schematic showing sagittal view of a mouse brain at embryonic day 15.5. Black line indicates the location of the anteroposterior regions where midbrain dopamine neurons are located. Thin sections are made using a cryostat and are collected on membrane coated glass slides. Following immunolabeling, midbrain dopaminergic neurons are visible in brown (B). Laser microdissected samples are collected in a tube cap filled with lysis buffer (C). Region of interest (blue line in D) or individual cell (E) can be dissected and retrieved in the tube cap. Scale bars: (D) 250μm, (E) 50μm. Please click here to view a larger version of this figure.

The most critical point of this method consists in labeling cells of interest while preventing RNA degradation. As RNAses are active in aqueous solutions, decreasing incubation times improves RNA conservation11,15. All solutions used must be treated with DEPC to inactivate RNAses. All materials and surfaces need to be treated with a surface RNAse decontamination solution to prevent RNAses contamination. Finally, in these conditions, the addition of RNAse inhibitor in all solutions is effective in preserving RNA from being degraded. The use of high salt conditions applied during antibody incubation has been previously shown to be effective in preserving RNA9,10. However, this alternative method remains limited to quick staining using robust antibodies. The thickness of the sections represents another critical point and depends on the size of the cell of interest. Since the average size of the cell body of dopaminergic neurons is around 10µm, we select this section thickness to obtain one layer of cells.

The major limitation of this technique compared to FACS is the low number of cells that can be microdissected. The use of RNA amplification kit is required for gene profiling experiments using RNA-sequencing or microarray16. However, qRT-PCR can be performed directly without the amplification step (Figure 2c). Qualitative assessment of the staining obtained with the quick immunolabeling protocol should always be performed and should not differ from the staining obtained using the normal immunolabeling protocol.

Until now, laser capture experiments were mostly used to isolate populations of cells from transgenic animals expressing markers like GFP or using quick histological colorations such as Nissl staining. The method presented here allows visualizing cells of interest using immunohistochemistry. Isolating and acquiring the gene expression profile of chemically identified populations of cells is now possible17. The protocol described here can be applied to any tissues and used with any suitable antibodies.

In the brain, neurons can be divided by their geographic localization but most brain regions contain a variety of different subpopulations based on their chemical identity. The gene expression pattern of certain types of neurons can be largely different from another cell type in the same cerebral area. According to the biological or pathological context, gene expression profile of a specific cell population can also change considerably. Using the procedure described here, it is possible to monitor these changes, paving the way to new discoveries8,18,19. 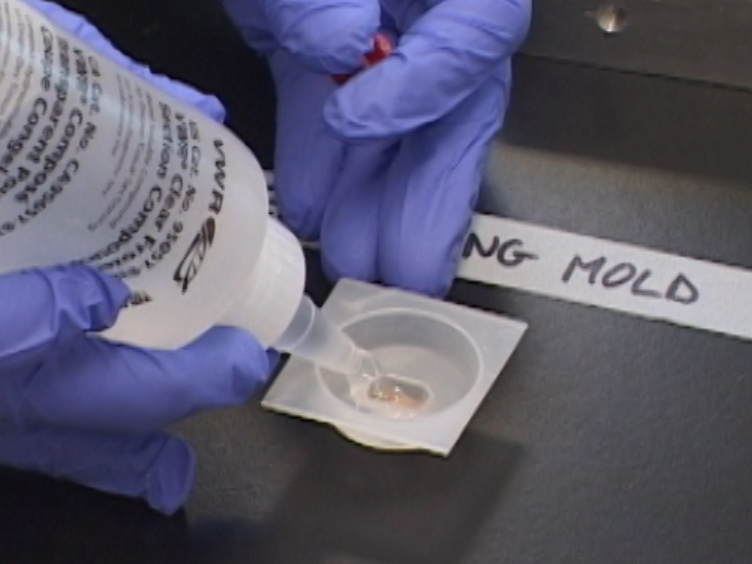