Halitosis is a common complaint involving social and communicational problems in humans and also affects the pet-owner relationship. In this randomized placebo-controlled crossover clinical evaluation, we assessed the effectiveness of a dedicated dietary supplement to improve chronic halitosis in 32 dogs of different breeds and ages. This protocol describes how to evalute the presence of oral volatile suphur compunds, e.g. methyl mercaptan, hydrogen sulfide and dimethyl sulfide, by means of a portable gas chromatograph device coupled with a syringe, which was used to collect the breath, and a dedicated software, which allows the operator to monitor each compound concentration during each measurement, in a relatively short time (8 min).

A significant modification of halitosis parameters was observed after 30 days since the beginning of treatment (p <0.05), while a long-lasting effect was still observed even 20 days after the suspension of the treatment. Portable gas chromatograph, which is also widely used in clinical practice, can be therefore used to confirm and control halitosis in humans and animals. Even though human and animal species present some differences, this innovative and alternative therapy for halitosis management might be extended to human clinical practice as an adjuvant dietary approach.

Oral malodor, also known by the term halitosis, is a common complaint which causes embarrassment in interpersonal social relationships1 as much as body malodor2. Although most epidemiological data on oral malodor is limited in accuracy and sensitivity due to a subjective self-estimation, studies report that 30-50% of the population is affected by this pathology3-6. Some studies have also evidenced that it is more prevalent in men than in women regardless of age with a ratio 3:1 and the ratio is slightly higher in people over 20 years7.

Halitosis can be staged depending on its etiology: type 1 (oral), type 2 (airway), type 3 (gastroesophageal), type 4 (blood-borne) and type 5 (subjective); however, it has been hypothesized that halitosis could be potentially considered the sum of these types in any combination, superimposed on the physiologic odour present in health (Type 0)8,9. Scully et al., who widely described and characterized aetiopathogenesis and management of halitosis, reported that in some patients it has an extra-oral aetiology and, in a few of them, metabolic anomalies are involved10. The authors pointed out that volatile sulphur compounds (VSC) and some predisposing factors, e.g. poor oral hygiene, hyposalivation, dental appliances, gingival and periodontal disease and mucosal disease, are mainly responsible for the malodor. Further, they proposed oral health improvement, anti-malodor therapies and malodor counteractives as a basic conventional approach. Moreover, they also proposed the use of probiotics and vaccines against malodor causing bacteria.

Human and animal companions, i.e. cats and dogs, can be affected by food-related adverse reactions which can involve several systems such as the gastroenteric, cutaneous, otological, ocular, urinary and respiratory systems11-13. However, several animal studies have pointed out that the nasal chamber is one of most involved systems where tartar14, stomatitis15, and halitosis16 are quite often present. Furthermore, bacteria that cause halitosis can be transmitted from animal companions to humans17. Iwanicka-Grzegorek quantified sulphur compounds and low molecular mass amines in saliva from 84 patients suffering from halitosis and 40 healthy controls. More than 80% of patients belonging to the halitosis group reported having pets in childhood (P <0.001) and over 70% still owned a pet (P <0.001).

Therefore nutrition can be used to manage halitosis. Moreover, nutrition plays a pivotal role in tooth development, oral and gum tissue integrity, bone resistance and even dental and oral disease management18. Based on such considerations, at the Italian Association for Oncological Research Disease (AIRMO) Center, we run a randomized placebo-controlled crossover clinical evaluation involving 32 dogs suffering from halitosis in order to investigate the efficacy of a dietary supplement vs. a commercially available pet food.

This clinical evaluation was planned accordingly with the European legislation (86/609/EU) and the experimental protocol was approved by the Ethics and Welfare Animal Committee of the AIRMO Research Center (Milan, Italy).

Note: The gas chromatograph is a portable device which measures the volatile sulphur compounds (VSC), hydrogen sulfide, methyl mercaptan, and dimethyl sulfide, which are the major causative factors of halitosis, providing information about the concentration of each gas measured. Measuring each VSC helps to identify the cause of halitosis and assess treatment efficacy.

Data were analyzed, presented as the means ± standard error of the mean and checked for normality using the D’Agostino-Pearson normality test. A multiple t-test was used to compare changes in VSCs score at follow-up versus baseline for each treatment modality.

Halitosis is a common problem in dogs, representing a psychosocial issue significantly affecting the pet-owner relationship19. Bad breath comes from microbial metabolism of both exogenous and endogenous protein substrates within the oral cavity20 which results in volatile sulphur compound production, and is worsened by other factors including acute necrotising ulcerative gingivitis, infected extraction site, debris under dental appliances, ulcers, tonsilloliths and low hygiene21-23. The main agents responsible for bad breath production are Gram-negative bacteria24 and their increase is related to a thickening of dental plaque25. Good oral hygiene along with specific diets can reduce the microbial load to the physiological level, reducing halitosis and avoiding gengivitis and periodontal diseases that have unpleasant effects on breath26.

This view is supported by our study showing that, after 10 days of dietary supplement intake, an overall improvement was observed in 29 out of 32 dogs (90%) presenting a moderateto-severe malodor and, at the end of the evaluation, 19 out of 29 dogs (65%) who achieved an improvement acquired a stabile physiological condition regarding VSCs concentration.

Our investigation broaches the very intriguing issue of the possible administration of a dietary supplement to dogs with breath malodor by basically introducing fish hydrolized proteins, sage, Ribes nigrum L., thyme, lysozyme, propolis, bioflavonoids and vitamin C in the daily nutritional schedule. These compounds, widely used in traditional medicine, have been already proven effective both in vitro and in vivo.

Specifically, fish proteins were chosen on the basis of previous chromatographic studies which pointed out the presence of great amounts of hydrogen sulfide, methanethiol, ethanethiol, dimethyl sulfide, and ethylene sulfide in beef proteins27. Literature studies have also shown an antimicrobial activity of sage and Ribes nigrum L. against Streptoccocus mutans which is known to be one of the oral pathogens (along with Porphyromonas gingivalis and Candida albicans) responsible for oral malodor and dental caries formation28-30. Bioflavonoids and vitamin C have been recognized as both antiinflammatory and bacteriostatic agents limiting the growth of certain bacteria associated with periodontal diseases31.

Regarding propolis and thyme, a reduction in malodor production from incubated whole saliva was demonstrated by Sterer et al.32 The bacteriostatic activity of propolis has been widely demontrated in literature, ranging from limiting the quantity of bacterial plaque33-37 to decreasing the tolerance of microorganisms to acid pH38, showing greater effectiveness than chlorhexidine gluconate solutions39. Moreover, propolis was proven effective in reducing teeth caries in rats limiting the number of microorganisms, slowing down synthesis of insoluble glucans, and glucosyltransferase activity40.

Our study presents some limitations such as the sensitivity of the instrument, if compared with other available techniques (e.g. bumpy WO3 hemitube nanostructure assisted by O2 plasma surface modification with functionalization of graphene-based material41, electrospun SnO2 nanofibers sensitized with reduced graphene oxide nanosheets42, benzoyl-DL-arginine-naphthylamide (BANA) test43, High Performance Liquid Chromatography (HPLC)44 and Solid-Phase Micro Extraction-Gas Chromatography/Mass Spectrometry (SPME-GC/MS45). On the other hand, the device employed in this study might allow, for instance, fast data collection to rapidly achieve an early diagnosis of viral hepatitis B, which is also characterized by elevated dimethile sulfide levels46 or to establish a state of systemic and/or respiratory disease (such as pneumonia, pulmonary emphysema and bronchitis) that are characterized by elevated hydrogen sulfide, methyl mercaptan and dimethyl sulfide levels47.

During the procedure we realized that the time available to collect the breath from a dog’s mouth was slightly lower than that required (few seconds against 30 sec suggested by the manufacturer). This problem was successfully overcome by repeating each measurement three times. A critical step during the experiment was breath collection. In order not to leave the dog with his mouth open for too long without damaging the syringe, we placed the syringe in the dog’s labial commissure in order to safely collect the breath.

As observed in humans, further applications of this technique will be the prevention of breath-related diseases, i.e. systemic and respiratory, in dogs and more generally in pets. In summary, our study showed that the dietary supplement was effective in reducing chronic halitosis in dogs. Our results might be also in agreement with what is proposed by Porter et al., who hypothesized a possible interplay between halitosis and the gastrointestinal tract suggesting that a therapy for halitosis with oral origin might also have some effect upon gut bacteria composition which is known to be responsible, in some cases, for volatile sulphur compounds production48. Nevertheless, a dysbiosis might also occur after a massive use of antibiotics49, or meat derived from intensive livestocks and commonly used in most of animal and human food50,51.

This review was not supported by grants. We thankSanypet S.p.a. (Padua, Italy) for kindly providing the dietary supplement and placebo used in this study. We also thank San Patrignano Community which kindly participated in the study by supplying all dogs. 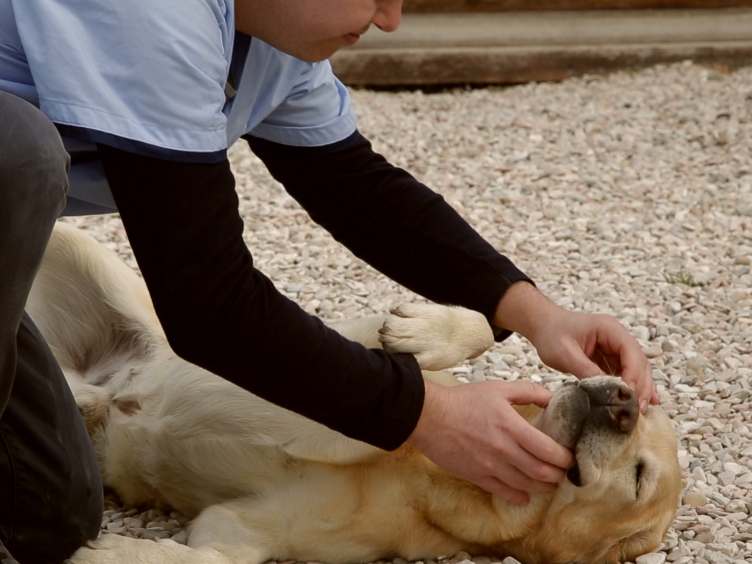