A protocol for conducting thermopower wave experiments is presented. The synthesis of hybrid composites of a chemical fuel and micro/nanostructured material, manufacturing of a thermopower wave generator, and methods for measuring the corresponding physical phenomena are described.

When a chemical fuel at a certain position in a hybrid composite of the fuel and a micro/nanostructured material is ignited, chemical combustion occurs along the interface between the fuel and core materials. Simultaneously, dynamic changes in thermal and chemical potentials across the micro/nanostructured materials result in concomitant electrical energy generation induced by charge transfer in the form of a high-output voltage pulse. We demonstrate the entire procedure of a thermopower wave experiment, from synthesis to evaluation. Thermal chemical vapor deposition and the wet impregnation process are respectively employed for the synthesis of a multi-walled carbon nanotube array and a hybrid composite of picric acid/sodium azide/multi-walled carbon nanotubes. The prepared hybrid composites are used to fabricate a thermopower wave generator with connecting electrodes. The combustion of the hybrid composite is initiated by laser heating or Joule-heating, and the corresponding combustion propagation, direct electrical energy generation, and real-time temperature changes are measured using a high-speed microscopy system, an oscilloscope, and an optical pyrometer, respectively. Furthermore, the crucial strategies to be adopted in the synthesis of hybrid composite and initiation of their combustion that enhance the overall thermopower wave energy transfer are proposed.

Herein, we show how the manufacturing processes, formation of an aligned chemical fuel, and mass ratio of fuel/core materials affect thermopower wave performance. On the basis of a MWCNT array fabricated by thermal chemical vapor deposition (TCVD), we show how a hybrid composite of a chemical fuel and MWCNTs is prepared for thermopower wave energy generation. Design of the experimental setup that enables the evaluation of energy conversion is introduced along with corresponding experimental measurements for processes such as combustion propagation and direct electrical energy generation. Moreover, we demonstrate that polarity distribution—described by the dynamic output voltage and specific peak power—crucially determines the electrical energy conversion. This study will provide specific strategies to enhance energy generation, and will help in understanding the underlying physics of thermopower waves. Furthermore, the manufacturing process and experiments described here will help in extending research opportunities on thermopower waves, as well as on chemical–thermal–electrical energy conversion.

2. Synthesis of Hybrid Composite of Chemical Fuel and MWCNT Films

The aligned MWCNT array, as a core nanostructured material for thermopower waves, was synthesized by TCVD,11-13 as shown in Figure 4A. The diameter of as-grown MWCNTs is 20–30 nm (Figure 4B). The aligned hybrid composite of the picric acid/sodium azide/MWCNTs is shown in Figure 5A. This composite was synthesized by the wet impregnation process,14 as described in the protocol section. In order to form an interface between the chemical fuel and MWCNTs, picric acid was dissolved in acetonitrile (a low-surface-energy solvent), to allow penetration inside the MWCNT array. Further, while sodium azide was dissolved in DI water to form a thin coating for easy ignition. The chemical fuel was composed of two chemicals: the main chemical fuel was picric acid with a high enthalpy of combustion (2,570 kJ/mol) while sodium azide was used as the fuel for the initial reaction owing to its low activation energy (40 kJ/mol).5 Moreover, the mixture of picric acid/sodium azide formed a one-dimensional structure that amplified the combustion, as shown in Figure 5B.15 After manufacturing of the thermopower wave generator, the high-speed microscopy system recorded combustion propagation (Figure 6). Joule-heating ignited the combustion, and it was quickly transformed as a self-propagating chemical reaction along the aligned direction of MWCNTs (Figure 6a and 6b). Simultaneously, concomitant electrical energy conversion—as an output voltage—was obtained using the synchronized oscilloscope (Figure 7). The nickel–chrome wire used for the ignition only contacted the fuel compound on the hybrid composite, and there was no disturbance from the external electrical signal. As a control experiment, chemical combustion without using the MWCNT array was investigated via the same procedures. It was confirmed that there was no specific direction for combustion. Moreover, electrical energy generation was not observed when the MWCNT array was not used. 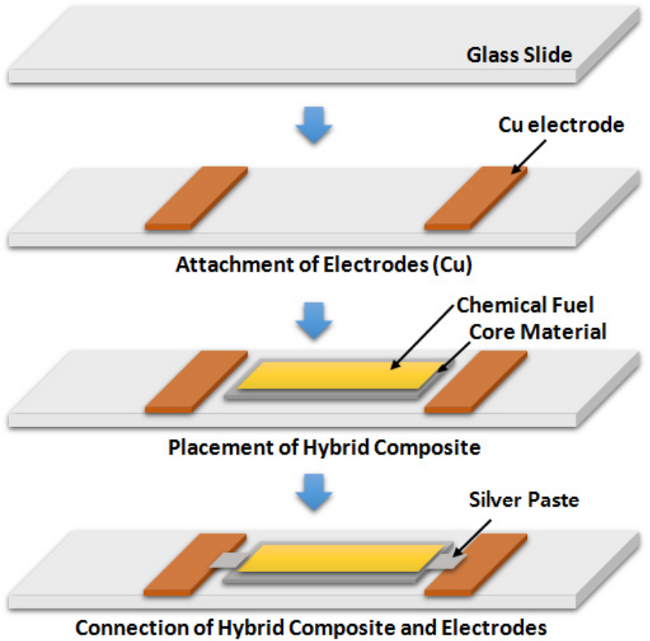 Figure 4. Extended MWCNTs. (A) SEM image of a MWCNT array synthesized by TCVD. (B) TEM image of an individual MWCNT. Please click here to view a larger version of this figure. 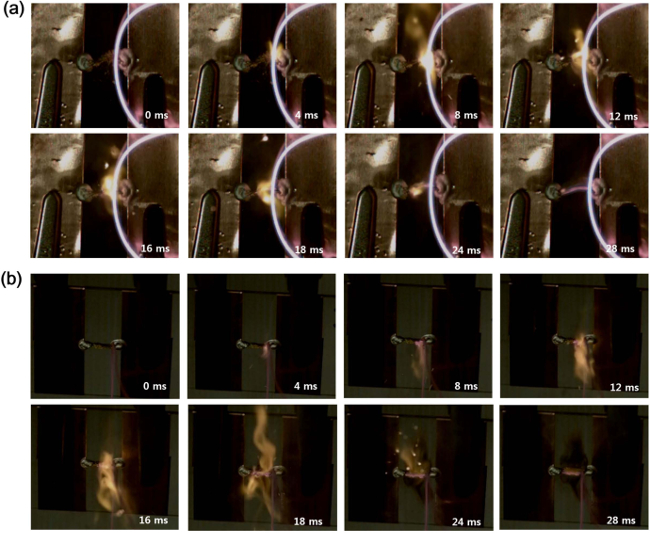 Figure 7. Electrical energy generation from thermopower waves. Output voltages in (A) single polarity, and (B) disordered polarity. Please click here to view a larger version of this figure. 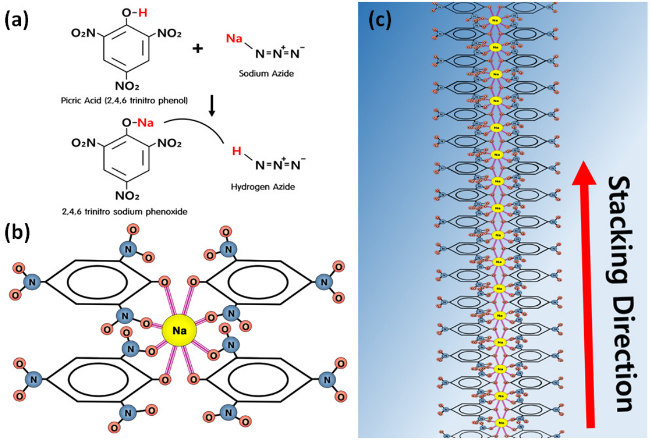 Figure 8. Scheme of structural changes in chemical fuel mixtures of picric acid/sodium azide. (A, B) Chemical structures of picric acid/sodium azide and sodium 2,4,6-trinitrophenolate/hydrogen azide after exchanging Na+ and H+. (C) Schematic of chemical structure of 2,4,6-trinitrophenolate/hydrogen azide in ordered, one-dimensional structure. Please click here to view a larger version of this figure.

The protocols of thermopower wave experiments involve critical steps that enable ideal thermal wave propagation as well as electrical energy generation. First, the specific position of ignition and the corresponding reaction transfer are considerable factors in controlling energy conversion from thermopower waves. Ignition at one end of the hybrid composite launched guided combustion along the interfaces between the core materials and chemical fuels in one direction. However, ignition at any other position generated bi-directional thermopower waves that were transferred to both ends, resulting in the cancellation of charge carriers in the opposite directions as well as disordered thermal transport inside the core materials. As shown in Figure 7A, ignition at one end produced electrical energy of single polarity; however, ignition at the center position resulted in two-directional combustion propagation, and disordered polarity in the output voltage (Figure 7B). Furthermore, single polarity in thermopower waves resulted in a peak output voltage that was more than five times that in the case of disordered polarity owing to the accelerated charge transfer by continuous thermal waves without the cancellation of charges.

Moreover, specific modification of the chemical fuel composition can further enhance energy conversion in the thermopower wave. Basically, the chemical fuel composition and mass ratio in hybrid composites have a strong influence on combustion propagation, as well as electrical energy generation from thermopower waves. First, one-dimensional aggregations of fuel mixtures inside MWCNTs can be realized by a special combination of a primary fuel and sodium azide (Figure 5). For example, there was no aligned aggregation of fuel mixtures of picramide and sodium azide. However, when picric acid and sodium azide were mixed and evaporated during the wet impregnation process, a new structure of a chemical fuel that promoted the guided chemical reaction was synthesized, as shown in Figure 8. In the picric acid and sodium azide mixture, the H+ ion in picric acid was exchanged with the Na+ ion in sodium azide, forming 2,4,6-trinitro sodium phenoxide and hydrogen azide (H–N3) in the fuel layer (Figure 8A and 8b).18 Simultaneously, stacking, which are induced by van der Waals forces between the benzene rings, constructed one-dimensionally aggregated structures, with shapes similar to a cylinder19,14 (Figure 8C). It was confirmed that owing to the negative enthalpy of formation of the new chemical compound and the one-dimensionally aligned structures of the chemical fuels, the output voltage generation and combustion velocity from thermopower waves were dramatically amplified by over 10 times.20 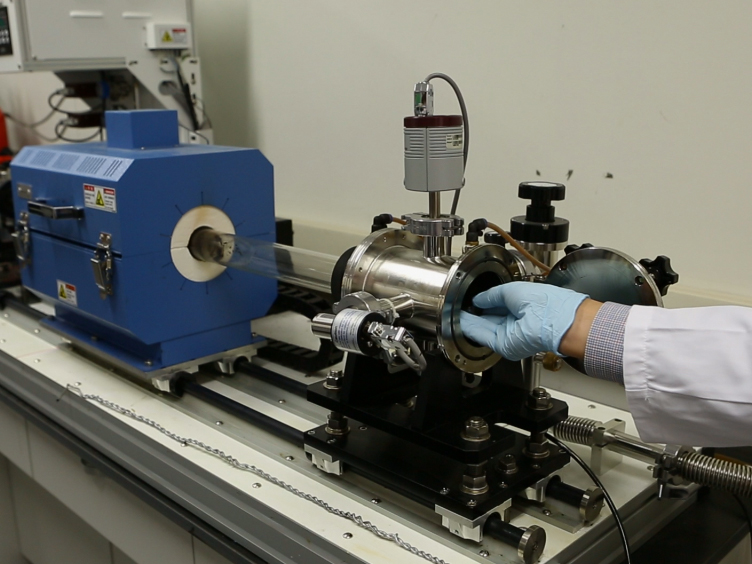