Metabolic reprogramming is a characteristic and prerequisite for M1 and M2 macrophage polarization. This manuscript describes an assay for the measurement of fundamental parameters of glycolysis and mitochondrial function in mouse bone marrow-derived macrophages. This tool can be applied to investigate how particular factors affect the macrophage’s metabolism and phenotype.

Specific metabolic pathways are increasingly being recognized as critical hallmarks of macrophage subsets. While LPS-induced classically activated M1 or M(LPS) macrophages are pro-inflammatory, IL-4 induces alternative macrophage activation and these so-called M2 or M(IL-4) support resolution of inflammation and wound healing. Recent evidence shows the crucial role of metabolic reprogramming in the regulation of M1 and M2 macrophage polarization.

In this manuscript, an extracellular flux analyzer is applied to assess the metabolic characteristics of naive, M1 and M2 polarized mouse bone marrow-derived macrophages. This instrument uses pH and oxygen sensors to measure the extracellular acidification rate (ECAR) and oxygen consumption rate (OCR), which can be related to glycolytic and mitochondrial oxidative metabolism. As such, both glycolysis and mitochondrial oxidative metabolism can be measured in real-time in one single assay.

The presented functional assay serves as a framework to investigate how particular cytokines, pharmacological compounds, gene knock outs or other interventions affect the macrophage’s metabolic phenotype and inflammatory status.

While macrophages play a central role in virtually all diseases, the molecular mechanisms that regulate their phenotype are still not fully unraveled. Macrophages display high heterogeneity and in response to the microenvironment adopt different phenotypes1. LPS(+IFNγ)-induced classically activated M1 or M(LPS) macrophages promote inflammation and protect the host against different types of microbial threats2. Others use IFNγ alone or in combination with TNF as stimuli to elicit M1 polarization. IL-4 and/or IL-13 induces alternative macrophage activation and these M2 or M(IL-4) cells are potent suppressors and controllers of ongoing immune responses3. Polarized macrophages display a distinct regulation of cellular metabolism with LPS-activated M1 macrophages undergoing a metabolic switch to enhanced glycolysis4-6. Conversely, enhanced fatty acid oxidation (FAO) and mitochondrial oxidative phosphorylation (OXPHOS) provides sustained energy in IL-4-induced M2 macrophages7-9. Thus, altered metabolism is not only a characteristic of polarized macrophage subsets, it is also a prerequisite for proper polarization and inflammatory regulation. Importantly, the inhibition of glycolysis or OXPHOS/FAO has been demonstrated to impair M1 or M2 activation, respectively8,10. As such, identifying metabolic changes in macrophages could be applied as a tool to assess their polarization status and inflammatory potential.

A consistent assay that measures macrophage metabolism could therefore be used to predict whether a drug, gene knock down or other treatment affects macrophage polarization and function. In this video, an extracellular flux analyzer is used to characterize the bioenergetics profiles of naïve, M1 and M2 macrophages.

2. Preparation of the Extracellular Flux Assay

After finishing the extracellular flux assay and cell quantification, data can be normalized for cell counts and analysed. This will typically yield ECAR and OCR plots as shown in Figure 1A and Figure 1B.

After the injection of glucose (A), the increase in ECAR represents the glycolysis rate. The additional increase in ECAR after ATP synthase inhibition with oligomycin (B) provides information about the glycolytic reserve and capacity (Figure 1A). When analysing the OCR values, oligomycin injection (B) allows calculation of the oxygen consumption used for mitochondrial ATP synthesis. FCCP (C) uncouples mitochondrial respiration and the corresponding OCR measurements yield data about the maximal and spare respiratory capacity. Finally, injection of rotenone (Rot) and antimycin A (AA) block mitochondrial complex I and III and the residual OCR represents the non-mitochondrial oxygen consumption (Figure 1B). 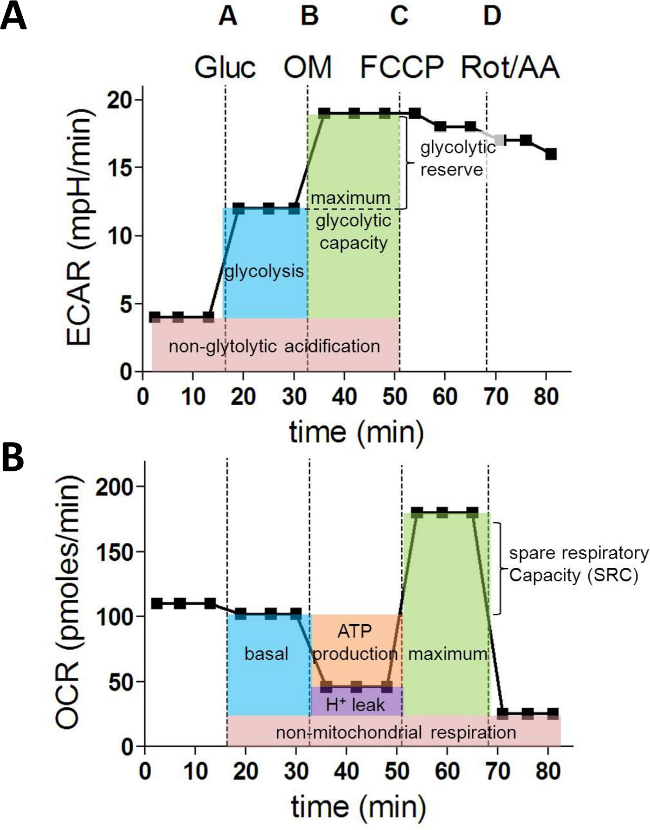 After the run, ECAR and OCR measurements 1 till 15 for each well can be exported to Excel and the following glycolytic parameters can be calculated from the ECAR measurements as follows:

From the OCR rates, the next metabolic characteristics can be determined: 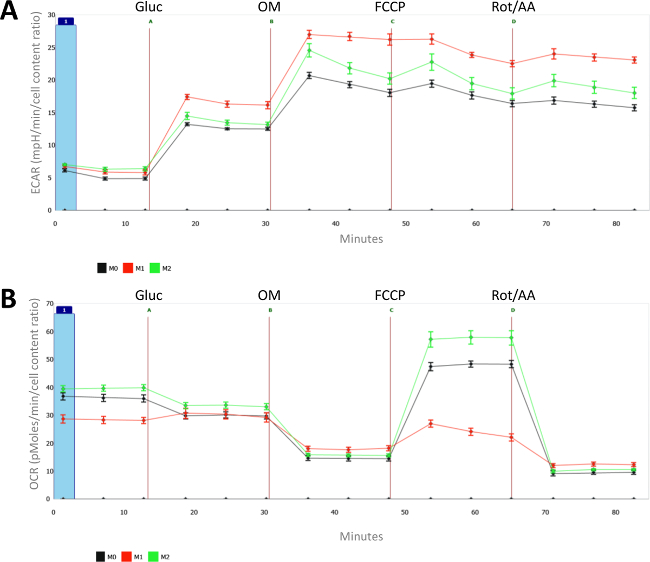 Figure 2: Metabolic characteristics of naïve (M0), LPS- (M1) and IL-4- (M2) polarized macrophages. For each measurement, the mean and standard error of the mean (SEM) of 8 individual wells is presented. (A) Extracellular acidification rates (ECAR, in mpH/min) and (B) oxygen consumption rates (OCR, in pMoles/min) are measured for differentially polarized (M1 and M2) and naïve macrophages (M0). All measurements were normalized for cell count (as measured with CyQUANT) and the average cell count of the naïve macrophages was set at 1. Injection A = glucose; B = oligomycin; C = FCCP; D= antimycin A + Rotenone. Please click here to view a larger version of this figure.

The aim of our laboratory is to understand how macrophage polarization and function can be influenced with the ultimate goal to improve outcome of atherosclerosis and other inflammatory conditions12. To assess macrophage polarization, one typically measures the LPS(+IFNγ)-induced and IL-4-induced gene expression of M1 and M2 marker genes (qPCR), determines IL-6, IL-12, TNF and NO secretion (by ELISA and Griess reaction) and examines IL-4-induced CD71, CD206, CD273 and CD301 surface expression (by flow cytometry) and arginase activity3,13. Additionally, apoptosis assays (by Annexin-V/PI staining), phagocytosis assays (with fluorescent latex beads and/or pHrodo E. coli) and foam cell formation assays (by DiI-oxLDL uptake, LipidTOX neutral lipid staining) can be performed to evaluate macrophage functionality14. Additionally, extracellular flux analysis can be performed to measure bioenergetics profiles of polarized macrophages as a new and alternative functional readout.

This manuscript shows that macrophage polarization induces metabolic reprogramming with LPS-induced macrophages switching to increased glycolysis as their energy source. Conversely, IL-4-induced M2 macrophages use mitochondrial oxidative phosphorylation as the main source of ATP. Importantly, metabolic reprogramming not only provides energy for the particular requirements of M1 and M2 polarized macrophages. Indeed, metabolic changes affect metabolite concentrations that are direct regulators of the macrophage phenotype 10,15,16. Hence, macrophage metabolism is not only a characteristic (as shown here in Figure 2) but also a driver of distinct macrophage polarization states and this new knowledge supported the rapid growth of the immunometabolism research area during the last couple of years.

However, robust measurements of metabolic profiles in macrophages remained difficult and had their limitations. In this study, an extracellular flux analyser is applied to robustly measure glycolysis, glycolytic reserve, maximal glycolytic capacity, non-glycolytic acidification, basal and maximal respiration, ATP production, spare respiratory capacity, proton leak and non-mitochondrial respiration in real-time in a minimal amount of macrophages.

Therefore, we modified and improved the manufacturer’s protocols as follows. The standard Mito Stress Test (# 103015-100) suggests using medium with glucose and pyruvate and a protocol with 3 injections (OM, FCCP, AA/Rot). We opt to start the assay with glucose/pyruvate-free medium, add glucose as a first injection in port A (like in the Glycolysis Stress Test # 103020-100) and add pyruvate together with the FCCP uncoupler in port C. In this way, all relevant glycolysis parameters are derived from the ECAR measurements 1-9 and all relevant information about mitochondrial function from OCR measurements 4-15.

Compared to existing methods, this protocol requires minimal amounts of macrophages and quickly provides virtually all fundamental metabolic cell characteristics. This results in enough surplus cells to perform other immunological assays and even the cells used for bioenergetics profiling could still be used for other purposed after the assay. Moreover, the particular 96 well plate format allows assessing multiple conditions in real time at the same time. Yet, the variation between individual wells can be considerable and therefore the use of at least 4 wells per condition is often desired. Taken this limitation into account, the described extracellular flux analysis still allows to run more than 10 experimental conditions (n = 6) at once, which is much more than traditional techniques.

Overall, this article provides an easy and reproducible functional assay that allows measuring all relevant glycolysis and mitochondrial parameters in polarized macrophage subsets. This technique can serve as a future application to assess macrophage function and to evaluate the effect of distinct manipulations (e.g. gene knock down, new pharmaceuticals, etc.) on the macrophage’s (metabolic) phenotype. As such, extracellular flux data can be used in conjunction with other assays to allow in-depth characterisation of the macrophage activation status.

Free access to this article is sponsored by Seahorse Bioscience. 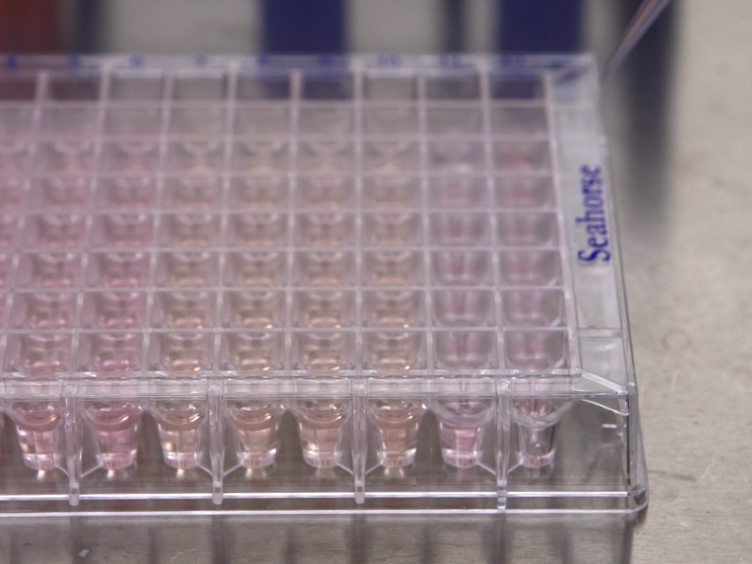