A method to prepare catalytically active Janus colloids that can "swim" in fluids and determine their 3D trajectories is presented.

We report a method to prepare catalytically active Janus colloids that "swim" in fluids and describe how to determine their 3D motion using fluorescence microscopy. One commonly deployed method for catalytically active colloids to produce enhanced motion is via an asymmetrical distribution of catalyst. Here this is achieved by spin coating a dispersed layer of fluorescent polymeric colloids onto a flat planar substrate, and then using directional platinum vapor deposition to half coat the exposed colloid surface, making a two faced "Janus" structure. The Janus colloids are then re-suspended from the planar substrate into an aqueous solution containing hydrogen peroxide. Hydrogen peroxide serves as a fuel for the platinum catalyst, which is decomposed into water and oxygen, but only on one side of the colloid. The asymmetry results in gradients that produce enhanced motion, or "swimming". A fluorescence microscope, together with a video camera is used to record the motion of individual colloids. The center of the fluorescent emission is found using image analysis to provide an x and y coordinate for each frame of the video. While keeping the microscope focal position fixed, the fluorescence emission from the colloid produces a characteristic concentric ring pattern which is subject to image analysis to determine the particles relative z position. In this way 3D trajectories for the swimming colloid are obtained, allowing swimming velocity to be accurately measured, and physical phenomena such as gravitaxis, which may bias the colloids motion to be detected.

Catalytic swimming devices are small scale, untethered colloids capable of autonomously generating motion in fluidic environments.1,2 These devices are attracting significant research interest as they have the potential to enable exciting new functions such as drug delivery,3 lab-on a chip transport4 and environmental remediation.5 One widely studied example are catalytic "Janus" swimmers.6 These particles get their name from having two distinct sides, or faces (Janus is a two faced Roman god). One side is catalytically active and able to perform a decomposition reaction, while the other is inert. In the presence of suitable dissolved fuel molecules, the resulting asymmetric chemical reaction creates gradients around the colloids which can produce motion via self-diffusiophoresis/electrophoresis.7

Characterizing the motion for these rapidly moving objects is challenging and many experimental observations to date have been limited to 2D. However, eventual applications are likely to exploit catalytic swimming devices ability to move throughout bulk solutions in 3D.8 To address this, here we describe a protocol that allows accurate 3D trajectories for swimming devices to be determined. This method is based on interpreting the ring structures produced by out of focus fluorescent colloids observed with a fixed focus objective,9 and is easy to apply using conventional unmodified microscopes. By clearly describing this method here, other researchers in this field will benefit by being able to access such 3D information. This will aid future insights into motion characteristics for swimming devices. Evidence of this potential is given by the recent report of swimming devices being directed by gravity,10,11 behavior which can most easily be visualized through the application of 3D tracking.11

This paper also clearly documents a method to manufacture catalytic Janus particle swimming devices, which will be of further benefit to standardize methods across the existing research groups investigating these devices, and additionally guide new researchers interested in making and investigating swimming devices.

CAUTION: Please consult all relevant material safety data sheets before use. Hydrogen peroxide used in this protocol is harmful, and the evolution of oxygen gas when exposed to platinum poses an explosion risk. Use all appropriate safety controls during this protocol including engineering controls while handling peroxide solutions (fume hood) and personal protective equipment (safety glasses, gloves and lab coat).

Figure 1 shows a typical dispersion of colloids on a clean glass slide prior to depositing platinum. Figure 2 shows a typical back-scattered SEM image for a half platinum coated Janus swimmer, under this imaging mode the platinum coated region produces bright contrast. The desired hemispherical platinum layer is apparent. Figure 3 displays the appearance of a typical fluorescent Janus swimmer under optimum illumination conditions fixed in gellan gum. The swimmer appears as a symmetrical ring feature, and it is the radius of the ring that can be used to determine the z-position of the colloid relative to the focus position. Figure 4 shows representative cross-sections for the radial brightness intensity distribution that is used in combination with image analysis algorithms to accurately locate the center and apparent radius of the colloid. Figure 5 contains a calibration curve obtained using a fixed colloidal sample and a calibrated microscope z-translation stage to relate apparent colloidal size and distance from focus position. This curve is fitted to a cubic function, which is used to convert apparent radius into z-coordinate. Finally, Figure 6 displays a typical x,y,z trajectory for a fluorescent Janus particle swimmer. 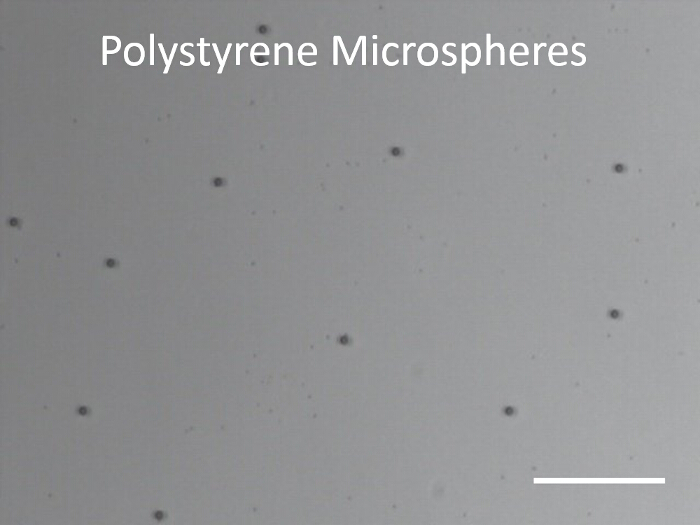 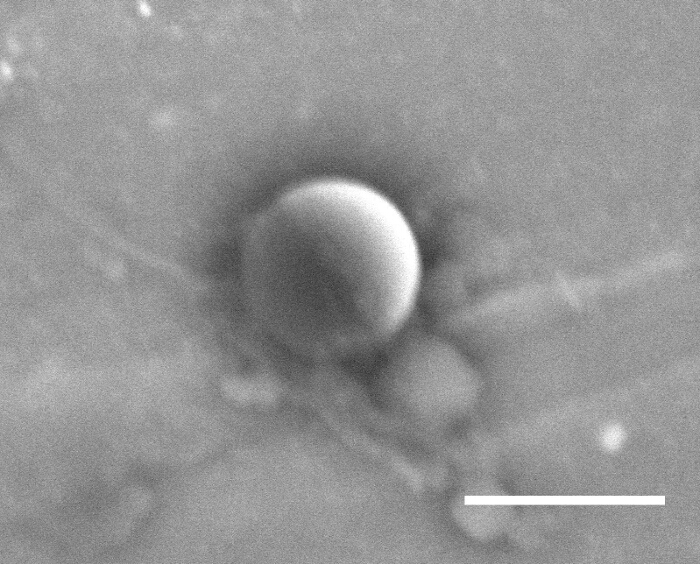 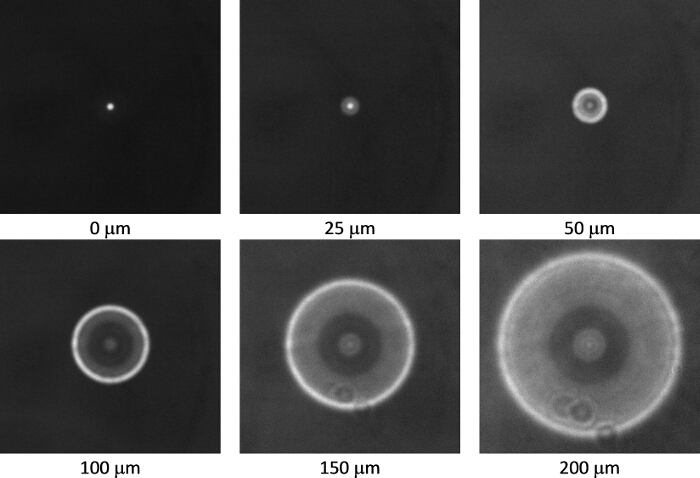 Figure 3. Calibration images of a 4.8 µm diameter fluorescent polystyrene sphere fixed in gellan gum recorded using a 20X objective (0.4 N.A.). The distances below each image indicate the distance of the focal plane of the objective above the sphere. As the image is defocused from 0 µm to 200 µm the in focus image of a bright disc changes to a bright ring, the radius of which is dependent upon magnification, the sphere size and its distance from the focal plane. Please click here to view a larger version of this figure. 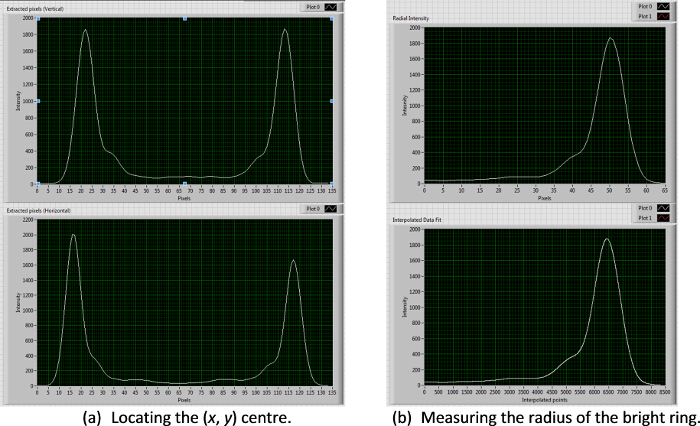 Figure 4. X, y, z particle tracking procedure. A set of self-written algorithms is used to first locate the (x, y) center of the bright ring by extracting a series of vertical and horizontal lines and finding the mean mid-point between the bright peaks (a). The ring radius is then calculated from the peak intensity of a spline fitted to the average pixel grey-values radiating out from the ring center (b). Please click here to view a larger version of this figure. 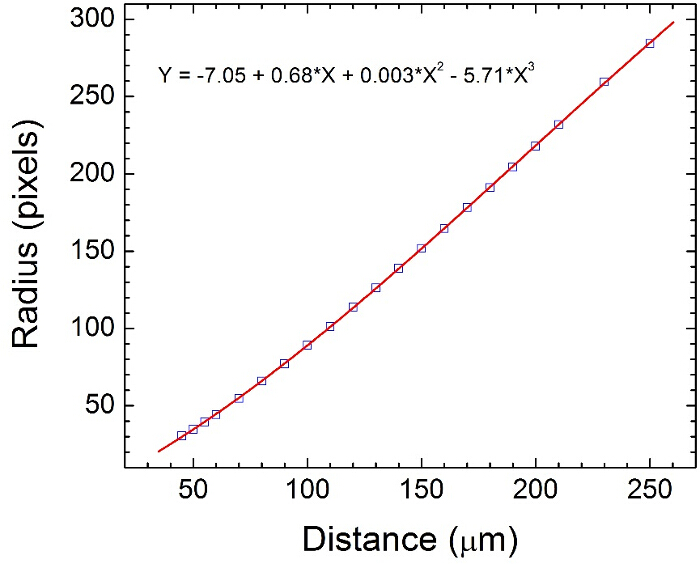 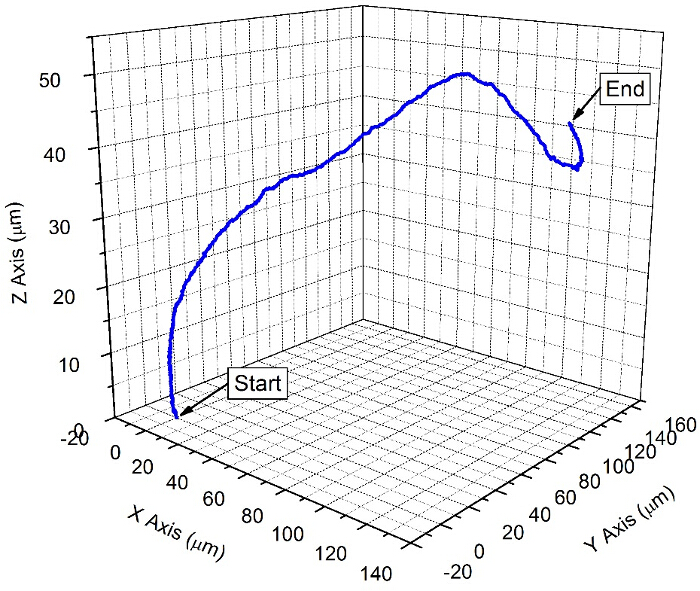 Figure 6. A trajectory of a typical fluorescent Janus sphere swimming device. A sequence of images of the moving swimming device was recorded over a period of 30 sec at a frame rate of 33 Hz. The (x, y, z) coordinates of the trajectory were obtained by locating the bright ring center (Figure 4 (a)) and comparing the measured ring radius to the calibration chart for each image in the sequence (Figures 4 (b) and 5). Please click here to view a larger version of this figure.

Many variables in the preparation protocol for platinum Janus particles will affect the observed trajectories. The parameters as described using 2 µm diameter particles will give propulsion velocities in the order of 10 µm per second. If smaller particles are used, velocities will increase, while increasing particle size will decrease propulsion velocity.12 The details of the evaporation protocol will also alter the trajectories observed. In this current protocol, a sparse distribution of colloids is recommended, together with metal evaporation normal to the slide orientation. These conditions result in symmetrical Janus structures as shown in Figure 2, which lead to linear trajectories within the limits of Brownian rotational diffusion.13 Conversely, if tight packed colloids are subject to glancing angle deposition, then the symmetry of the Janus cap can be broken, to induce spinning behavior.14 The particles produced here display relatively isotropic motion in all three dimensions; however if thicker platinum coatings, or larger particles are used, an upwards bias or gravitaxis can be imparted.11 Details of the storage of the Janus colloids after manufacture may also effect the swimming speeds observed. The high surface energy clean platinum surface emerging from the evaporation stage is susceptible to surface contamination for example from hydrocarbons, and in particular thiols.15

In addition, the solution properties in which the Janus colloids are re-suspended are critical for observing propulsion. Low peroxide concentrations will result in slower velocities, as the rate of the decomposition reaction producing motion reduces.6 In addition, low concentrations of salts will result in a dramatic reduction in propulsion velocity.7

A key feature of the colloids produced here is their neutral buoyancy, which makes them suitable for 3D tracking. In general the field of swimming devices has paid little attention to 3D effects, partly due to some prominent examples being made from dense metals, causing them to rapidly sediment,16 but also due to the difficulties and expense associated with making the required measurements. Clear drawbacks for some established 3D tracking methods exist for these rapidly moving colloids, for example, confocal scanning laser microscopy can lack the temporal resolution to record sufficient numbers of images to resolve trajectories. In this context, the method we present here has the significant advantage of only requiring a single frame to allow estimation of z-coordinate, which consequently allows high frame rates. Also, as z-coordinate reconstruction only relies on the relative contrast of the out-of-focus colloid in single frames, rather than the absolute fluorescence intensity, it is resilient to quenching and blinking effects in the fluorophore. These advantages are possible at the expense of a reduced depth of field over which 3D trajectory reconstruction is possible, and the requirement for well separated non-overlapping colloids. We hope that describing the protocol will allow other research groups with an interest in 3D behavior for their swimming devices to access this information straightforwardly and with a high degree of precision. It is clear that expanding the understanding of these devices to 3D will open up a significant range of interesting future phenomena and applications. Readers interested in further details of trajectory analysis are directed towards Reference 17 which describes common artifacts in propulsive systems and how to ensure accurate quantification of propulsion velocities.

This work was supported by EPSRC Career Acceleration grant EP/J002402/1. 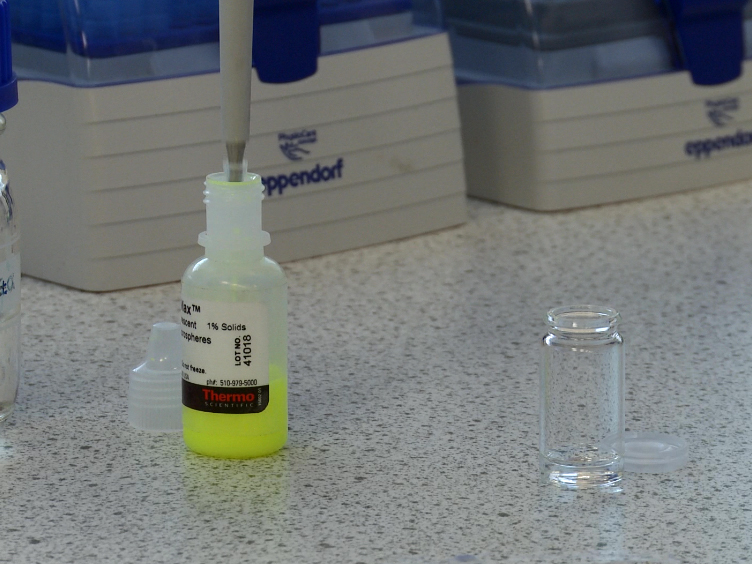