An organism’s physical traits, or phenotype, are a product of its genotype, which is the combination of alleles (gene variants) inherited from its parents. To varying degrees, genes interact with each other and environmental factors to generate traits. The distribution of alleles and traits within a population is influenced by a number of factors, including natural selection, migration, and random genetic drift.

In this video, JoVE introduces some of the foundational discoveries in genetics, from Gregor Mendel’s elucidation of the genetic basis of inheritance, to how natural processes affect allele distributions within populations, to the modern synthesis of biology that brought together Mendelian genetics and Darwinian evolution. We then review the questions asked by geneticists today regarding how genes influence traits, and some of the main tools used to answer these questions. Finally, several applications of techniques such as genetic crosses, screens and evolution experiments will be presented.

Our traits depend on the genetic variants that we inherit from our parents. To understand why a person has a certain set of traits or “phenotype,” researchers study the function of individual genes and their alleles, and how genes interact with each other and the environment.

In this video, we’ll cover a brief history of genetics, major questions in the field, tools used by geneticists, and some current research.

Let’s begin by reviewing some foundational discoveries in genetics.

In the 1850s–60s, Gregor Mendel performed mating experiments in pea plants and observed that the inheritance of traits followed predictable rules and depended on parental “factors.”

In the same time period, Charles Darwin proposed his theory of evolution by natural selection, which hinged upon heritable variation in traits within populations that led to differential survival. However, it would be more than 70 years before the connection between Mendel and Darwin’s work was finally understood.

Although Mendel’s research largely fell into obscurity, it resurfaced in 1900 and was popularized by William Bateson, who also coined the term “genetics,” and in 1909, Wilhelm Johannsen first used the word “gene” in reference to Mendel’s factors. During the early 1900s, Bateson—together with R. C. Punnett and Edith Saunders—also described epistasis, where different genes interact to influence a phenotype; and linkage, where different traits appear to be inherited together.

In 1911, Thomas Hunt Morgan and colleagues, by studying the fruit fly Drosophila, proposed a mechanism for linkage—that genes are located on chromosomes, and genes on the same chromosome are inherited together. Two years later, Morgan’s student Alfred Sturtevant used such “linkage” to create the first genetic map, which depicted the relative locations of genes along chromosomes.

Despite the success of Morgan and others, doubts remained about the applicability of Mendel’s genetics to explain the heredity of many traits, such as human height, that show continuous variation in a population. R. A. Fisher successfully bridged this gap in 1918, when he demonstrated that continuously varying traits can be explained by the additive effect of a large number of genes.

Over the next two decades, Fisher, along with Sewall Wright and J. B. S. Haldane, provided further mathematical and experimental evidence to explain how allele frequencies in populations can be shaped by factors such as natural selection, as well as genetic drift, or the effect of random events. By the 1950s, these population geneticists had succeeded in bringing together Mendel and Darwin’s work in the “Modern Synthesis of Biology.”

After reviewing the history of genetics, let’s explore some key questions in the field.

Although some phenotypes are monogenic and controlled by single genes, most are polygenic and result from the combined action of multiple genes. Many scientists are investigating how genes function in pathways or networks to produce traits.

Other researchers are interested in teasing apart the roles of genes and environmental factors in producing different traits. One way researchers can accomplish this is by assessing the “reaction norm” of a genotype, or the range of phenotypes that it produces in different environments. Geneticists also compare the phenotypic profile of different genotypes for individuals within the same environment. This gives an estimate for the “heritability” of a trait, or the amount of phenotypic variance within a population that’s due to genetic variance. Heritability is affected by both genotypic and environmental variation, and a trait’s heritability can be different from one set of environmental conditions to another.

Finally, scientists are also trying to understand why certain alleles, even those that confer harmful traits such as sickle cell anemia, remain in a population. To do this, they study how forces like migration and natural selection can influence the frequencies of alleles and traits in a population.

Now that we’ve seen the questions geneticists ask, let’s look at the tools being used to answer them.

One popular method is the genetic cross, where organisms with different genotypes or phenotypes are mated, and traits in the offspring observed. Genetic crosses can help researchers evaluate how many genes determine a particular trait, how genes and their alleles interact with one another, and the chromosomal locations of genes.

Another tool for identifying novel genes involved in phenotypes is the genetic screen. Screens can be “forward,” where researchers generate mutants randomly and identify the mutated genes that give rise to phenotypes of interest; or they can be “reverse,” where researchers induce mutations in specific genes and observe what traits are affected. Screens can also involve growing organisms with the same genotype in different environments, or crossing a mutant organism with an array of gene deletion mutants, in order to identify new gene-environment or gene-gene interactions.

Finally, to understand how allele frequencies change in populations, evolution experiments can be performed. These experiments require that a group of organisms be grown under a selective pressure, like a single food source, over several generations. Researchers can then assess if and when beneficial mutations arise, and whether and how these mutations become established in a population.

Now, let’s examine some current applications of these genetic tools.

Some researchers are applying screens to organisms without established molecular genetic tools, such as the pathogenic bacteria Chlamydia. Here, primate cells were first infected with these bacteria, and subsequently exposed to a mutagen. The genomes of mutant Chlamydia bacteria were then sequenced to identify specific nucleotide changes. Using this technique, researchers identified mutations that resulted in bacteria forming atypically shaped “plaques” in mammalian cell cultures, possibly reflecting defects in infectious processes.

Other scientists are combining genetic screens and crosses to understand gene interactions. In this experiment, geneticists crossed a mutant yeast strain of interest with a library of deletion mutants. The resulting double mutants were screened by growing them in the same conditions, and their growth rate was assessed to derive a measure for the mutants’ fitness. From these data, researchers determined that, in double mutants, the presence of one mutation could occasionally enhance or suppress the effects of the other.

Finally, scientists are developing experimental tools to study the forces that shape population genetics. Here, a device called a chemostat is used so that microbes, such as yeast, can be cultured under constant conditions. The researchers carried out a competition assay to demonstrate that a mutation gave yeast a fitness advantage under certain growth conditions. In addition, an evolution experiment was performed where yeast was allowed to adapt to low-nitrogen conditions, and mutations in nitrogen metabolism pathways, which presumably conferred improved fitness, were identified by whole genome analysis.

You’ve just watched JoVE’s introduction to the genetics of individuals and populations. In this video, we’ve reviewed historical highlights and key questions in the field of genetics, prominent genetic tools, and some current applications of these techniques. As always, thanks for watching! 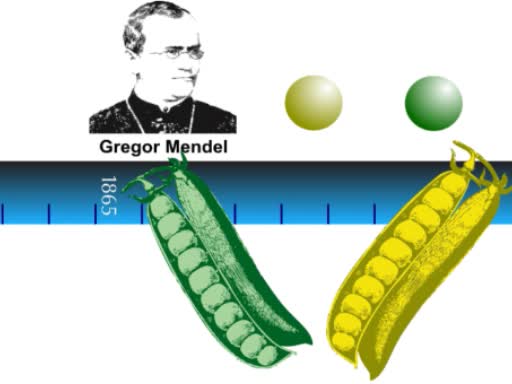