This article describes a protocol to efficiently derive and culture pluripotent stem cell lines from mouse embryos at the blastocyst stage.

Mouse embryonic stem cell (mESC) derivation is the process by which pluripotent cell lines are established from preimplantation embryos. These lines retain the ability to either self-renew or differentiate under specific conditions. Due to these properties, mESC are a useful tool in regenerative medicine, disease modeling, and tissue engineering studies. This article describes a simple protocol to obtain mESC lines with high derivation efficiencies (60-80%) by culturing blastocysts from permissive mouse strains on feeder cells in defined medium supplemented with leukemia inhibitory factor. The protocol can also be applied to efficiently derive mESC lines from non-permissive mouse strains, by the simple addition of a cocktail of two small-molecule inhibitors to the derivation medium (2i medium). Detailed procedures on the preparation and culture of feeder cells, collection and culture of mouse embryos, and derivation and culture of mESC lines are provided. This protocol does not require specialized equipment and can be carried out in any laboratory with basic mammalian cell culture expertise.

Embryonic stem cells (ESC) are pluripotent cells derived from preimplantation embryos, which retain the ability to either self-renew or differentiate under specific conditions1. Based on these properties, ESC have become a useful tool for regenerative medicine, disease modeling, and tissue engineering studies2.

ESC were derived for the first time from preimplantation mouse embryos, originating mouse ESC (mESC) lines with low success3,4. For years, the derivation efficiency remained low due to the difficulty of maintaining pluripotency in vitro. Besides the presence of feeder cells5, which improve derivation efficiency, promote colony attachment, and enhance karyotypic stability6, several modifications of the protocol lead to an improvement in pluripotency maintenance. The most important were the addition of Leukemia Inhibitory Factor (LIF) to mESC culture medium7,8, the use of embryos from the 129S2 permissive background9 and the culture of mESC with medium supplemented with defined serum, free of potential differentiation factors10. More recently, compelling evidence has shown that addition of a cocktail of two small-molecule modulators of signaling pathways to the mESC culture medium (known as 2i) is best to maintain pluripotency. The 2i cocktail consists of a combination of the MEK inhibitor PD0325901, which reduces the differentiation signals by inhibiting the mitogen-activated protein kinase (MAPK) pathway, and the GSK3β inhibitor CHIR99021, which enhances cell survival at low density by activating the Wnt pathway11.

In the present article, we describe a simple protocol to efficiently derive mESC lines from mouse blastocysts. We follow standard procedures, culturing embryos from permissive strains on feeder cells in derivation medium supplemented with LIF and a serum replacement12. Following this protocol, mESC lines can be derived with efficiencies equivalent to those obtained in 2i medium. In spite of this, 2i can be added to avoid possible problems with pluripotency maintenance or when working with non-permissive strains.

The use of the animals described in the sections below has been approved by the Ethics Committee on Animal and Human Research of the Universitat Autònoma de Barcelona and by the Departament d'Agricultura, Ramaderia, Pesca i Alimentació of the Generalitat de Catalunya (protocol #8741).

NOTE: Human foreskin fibroblasts (HFF-1) were previously frozen in 1 mL of freezing solution consisting of 90% Fetal Bovine Serum (FBS) and 10% dimethyl sulfoxide (DMSO) and stored in liquid nitrogen until use.

Following this protocol, over 95% of outgrowth formation should be achieved after the first week of culture (Figure 1A). Establishment of mESC lines after six passages is variable among experimental replicates, with an average success of 60-80%. The addition of 2i does not significantly improve the results when working with permissive mouse strains, such as those with a 129S2 background, but it is necessary when working with non-permissive strains.

Mouse ESC colonies should present a regular morphology with a flat shape and defined edges when cultured without treatment (Figure 1B-C) or cultured with 2i (Figure 1D). Colonies presenting peripheral differentiation signs should be discarded (Figure 1E-F). If the derivation efficiencies obtained are lower than the expected values, control the growth of mESC colonies and subculture them more often to avoid overgrowth, as this can cause cell death and would promote differentiation (Figure 1G-H). 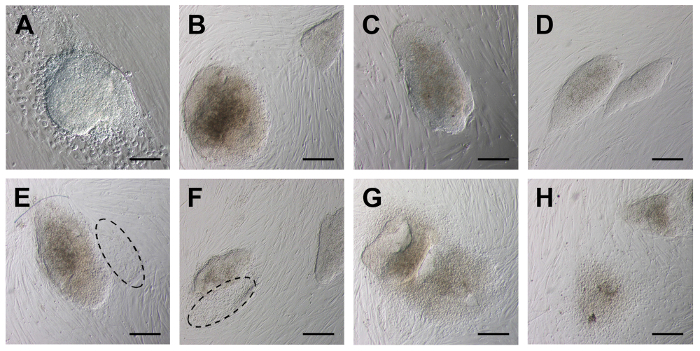 To verify the stemness of the putative mESC lines obtained after six weeks of culture, the presence of pluripotency and differentiation markers should be assessed. The mESC lines should be positive for pluripotency markers such as Oct4 and Sox2 (Figure 2 A-B). Moreover, after induction of spontaneous differentiation by culturing the cells for 10 days without feeder cells in DMEM supplemented with 10% FBS, mESC lines are expected to be positive for the ectoderm marker β-tubulin class III (Tuj1) (Figure 2C), the mesoderm marker α-Smooth Muscle Actin (αSMA) (Figure 2D) and the endoderm marker Alpha-Fetoprotein (AFP) (Figure 2E). Only the lines positive for the five markers assessed should be considered true mESC lines and thus used for the calculation of the derivation efficiency. Usually, this corresponds to virtually all the mESC lines generated using the present protocol. 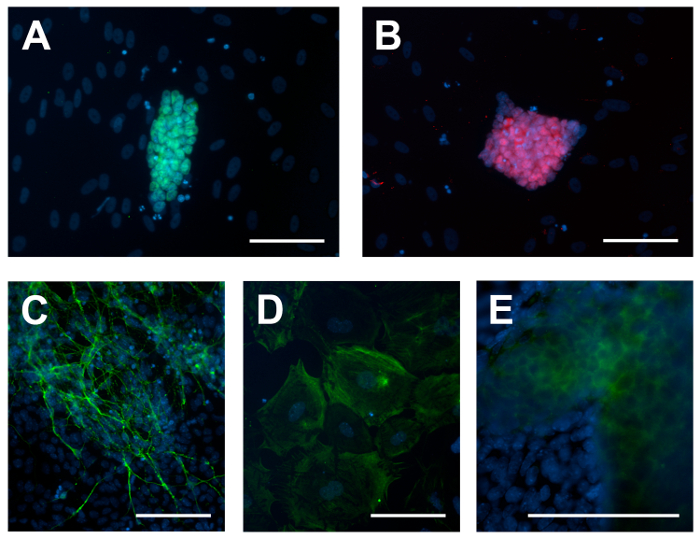 Although mESC line derivation is a well-known procedure routinely used in many laboratories, its efficiency is not always as high as expected due to the multiple factors that can disturb pluripotency maintenance. In the present article we show, step by step, how to establish mESC lines with high efficiencies using a simple and reliable protocol. These efficiencies are similar to those reported in the literature.

To ensure maximum efficiency, it is important to control the cells daily or every other day, since the time points indicated are just illustrative. It is essential to avoid the overgrowth of colonies, since this promotes cell death and differentiation. It is also important to reduce as much as possible the exposure of the colonies to trypsin-EDTA during their subculture, because this can also reduce cell viability.

Another pivotal factor is the source of feeder cells and their culture. Several studies have demonstrated that HFF, Mouse Embryonic Fibroblasts (MEF) and mouse STO fibroblasts are equally able to support ESC derivation and culture15. However, HFF are up to two times more durable than MEF and STO in culture16, allowing more time for the mESC to grow. Thus, the use of HFF avoids extra mESC subcultures.

It is important to point out that the genetic background of the embryos used as a source for mESC derivation can also significantly affect the derivation efficiency. Indeed, mouse strains have been classified into permissive strains (such as 129S2 and C57BL6) and non-permissive strains (such as CBA, NOD and FVB) according to their ability to yield mESC lines under standard conditions9,19. The protocol reported here can be successfully applied to embryos from both types of strains as long as the 2i cocktail is included in the derivation medium when working with embryos from non-permissive strains. The 2i medium is able to modulate the signaling pattern of mESC lines to sustain pluripotency, irrespective of the genetic background6. The main limitation is that, due to the strong signaling pattern acquired during culture20, mESC lines cultured in 2i become resistant to differentiation. To overcome this limitation, mESC lines should be cultured without 2i for at least one passage before the induction of differentiation to weaken the signaling acquired.

Overall, this work can ease the practice of mESC derivation by showing the steps as simply as possible and pointing at the main difficulties and how to overcome them.

We thank Jonatan Lucas for his technical assistance with feeder cell culture, Servei Estabulari de la UAB for animal care and Domènec Martín for recording the video. This work has been supported by Ministerio de Economia y Competitividad AGL2014-52408-R and Generalitat de Catalunya 2014 SGR-524. MVC is beneficiary of a PIF-UAB fellowship. 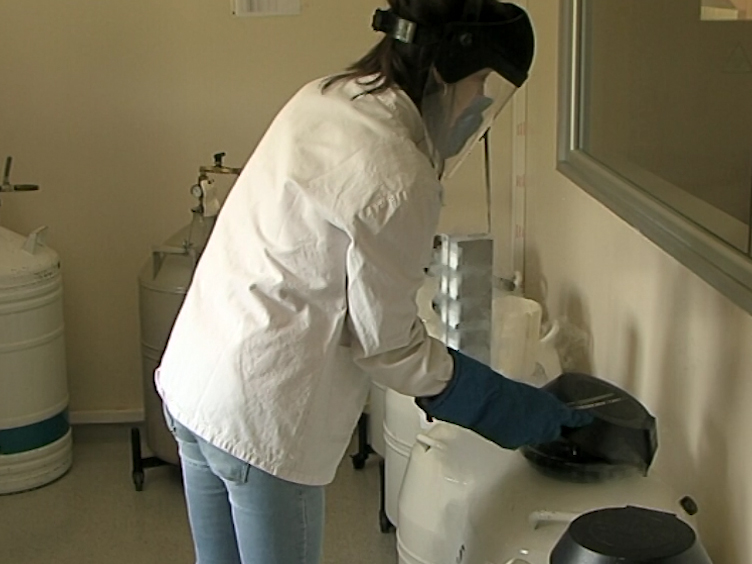