Here, we present a protocol to control the carrier number in solids by using the electrolyte.

A method of carrier number control by electrolyte gating is demonstrated. We have obtained WS2 thin flakes with atomically flat surface via scotch tape method or individual WS2 nanotubes by dispersing the suspension of WS2 nanotubes. The selected samples have been fabricated into devices by the use of the electron beam lithography and electrolyte is put on the devices. We have characterized the electronic properties of the devices under applying the gate voltage. In the small gate voltage region, ions in the electrolyte are accumulated on the surface of the samples which leads to the large electric potential drop and resultant electrostatic carrier doping at the interface. Ambipolar transfer curve has been observed in this electrostatic doping region. When the gate voltage is further increased, we met another drastic increase of source-drain current which implies that ions are intercalated into layers of WS2 and electrochemical carrier doping is realized. In such electrochemical doping region, superconductivity has been observed. The focused technique provides a powerful strategy for achieving the electric-filed-induced quantum phase transition.

Control of the carrier number is the key technique for realizing the quantum phase transition in solids1. In the conventional field effect transistor (FET), it is achieved by use of the solid gate1,2. In such a device, electric potential gradient is uniform throughout the dielectric materials so that induced carrier number at the interface is limited, shown in Figure 1a.

On the other hand, we can achieve the higher carrier density at the interface or bulk by replacing the solid dielectric materials with ionic gels/liquids or polymer electrolytes3,4,5,6,7,8,9,10,11 (Figure 1b). In the electrostatic doping by use of the ionic liquid, electric double layer transistor (EDLT) structure is formed at the interface between ionic liquid and sample, generating strong electric field (>0.5 V/Å) even at low bias voltage. Resultant high carrier density (>1014 cm-2) induced at the interface10,12,13 cause the novel electronic properties or quantum phase transition such as electric-field-induced ferromagnetism14, Coulomb blockade15, ambipolar transport16,17,18,19,20,21,22,23,24,25,26,27, formation of p-n junction and resultant electroluminance28,29,30, large modulation of thermoelectric powers31,32, charge density wave and Mott transitions33,34,35, and electric-field-induced insulator-metal transition36,37 including electric-field-induced superconductivity9,10,11,38,39,40,41,42,43,44,45,46,47,48,49.

In the electrolyte gating (Figure 1c), ions are not only accumulated at the interface to form EDLT, but can be also intercalated into layers of two-dimensional materials via thermal diffusion without damaging sample under applying the large gate voltage, leading to the electrochemical doping8,9,11,34,38,50,51,52,53. Thus, we can drastically change the carrier number compared to the conventional field effect transistor using the solid gate. In particular, the electric-field-induced superconductivity9,11,34,38,50 is realized by use of electrolyte gating in region of large carrier number where we cannot access by the conventional solid gating method.

In this article, we introduce this unique technique of carrier number control in solids and overview the transistor operation and electric-field-induced superconductivity in semiconducting WS2 samples such as WS2 flakes and WS2 nanotubes54,55,56,57.

2. Preparation of thin flake on substrate via scotch tape method

5. Completion of the device

The typical transistor operations of an individual WS2 NT and a WS2 flake devices are shown in Figure 3a and 3b, respectively, where the source drain current (IDS) as a function of the gate voltage (VG) nicely operates in an ambipolar mode, showing a remarkable contrast to the unipolar gate response by the conventional solid gated FET in previous publication58. Considering the ambipolar behavior is reversible and repeatable, these transistor operations are likely due to the electrostatic doping. In the electrostatic doping, ions are accumulated on the surface of the samples, which leads to the large electric potential drop and resultant carrier doping at the interface (Figure 1b).

Electrochemical doping by the intercalation (Figure 1c), on the other hand, is realized in large gate voltage region, causing much higher electron concentration in the bulk of the sample, instead of on the surface of the sample by electrostatic doping. A typical intercalation process is shown in the Figure 3c. When the gate voltage is firstly increased up to 8 V with a constant rate of 50 mV/s, IDS displays a saturation behavior indicating the electrostatic doping, similarly to the 2D WS2 case as shown in Figure 3b. When the gate voltage is kept at 8 V for a couple of minutes, another drastic increase of IDS by more than two orders of magnitude has been observed as shown in Figure 3c. This source drain current increase is presumably attributed to intercalation of K+ ions defusing into WS2 layers without damaging the crystal structure. This process causes much higher carrier concentration in the bulk compared with the electrostatic doping at the surface.

As shown in Figure 3d, the similar intercalation process is also realized in WS2 flake. When the gate voltage is firstly increased up to 6 V, IDS displays a similar saturation behavior. On the other hand, carrier density estimated by Hall effect does not significantly change, displaying the similar saturation behavior. When the gate voltage becomes higher than 6 V, IDS increases again because of the occurrence of intercalation which is proofed by the clear increase of the carrier density.

Temperature dependences of the resistance of WS2 NTs and flakes after electrochemical doping are shown in the Figure 3e and 3f, respectively. In both cases, the resistance shows the metallic behavior and superconductivity appears in low temperature region. 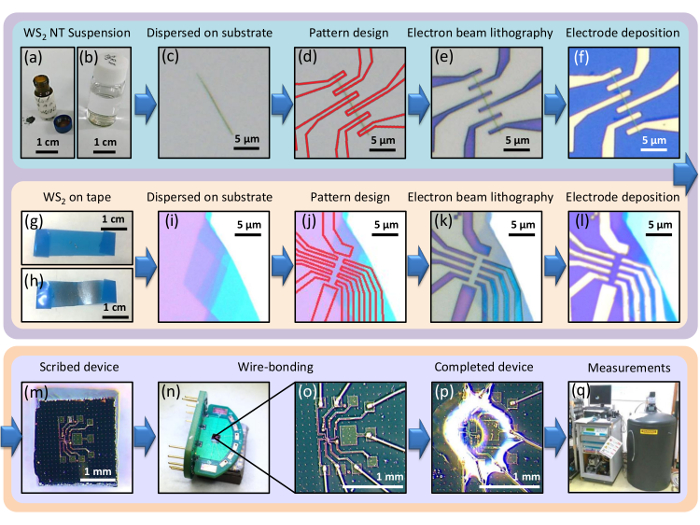 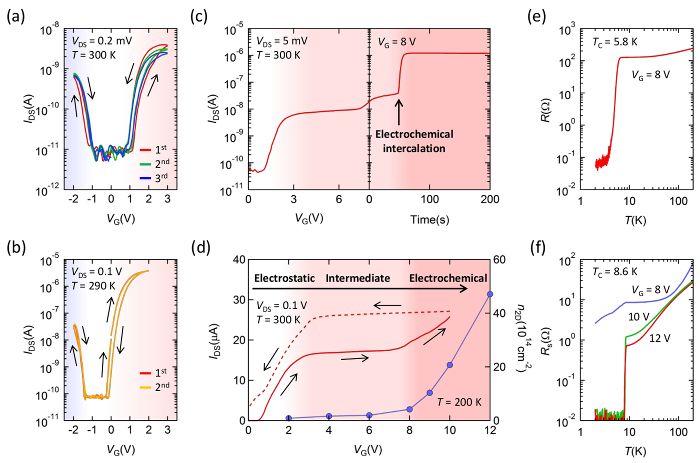 In both WS2 NTs and flakes, we have successfully controlled the electric properties by electrostatic or electro chemical carrier doping.

In electrostatic doping region, ambipolar transistor operation has been observed. Such ambipolar transfer curve with a high on/off ratio (>102) observed in low bias voltage indicates the effective carrier doping at the interface of electrolyte gating technique for tuning the Fermi level of these systems.

However, people have recently recognized that the chemical reaction might help for the future application, such as chemical etching for thinning films59,60 and electrochemical intercalation for heavily electron doping9,11,34,38,50,51,52,53 and phase transformation61,62,63. A similar technique has been also adapted for solid ion conductor51,52,53 and even photoactive EDLT has been developed64.

In the electrochemical doping region, we have observed the electric-field-induced superconductivity. The difference of the superconducting transition temperature between WS2 NTs and flakes, which is possibly due to the lower dimensionality of NTs, should be further pursued in the future.

As clearly demonstrated in the results of this study, carrier number control by the ionic liquid gating provides a powerful method for searching the quantum phase transition in nanomaterials.

We acknowledge the following financial support; Grant-in-Aid for Specially Promoted Research (No. 25000003) from JSPS, Grant-in-Aid for Research Activity Start-up (No.15H06133) and Challenging Research (Exploratory) (No. JP17K18748) from MEXT of Japan. 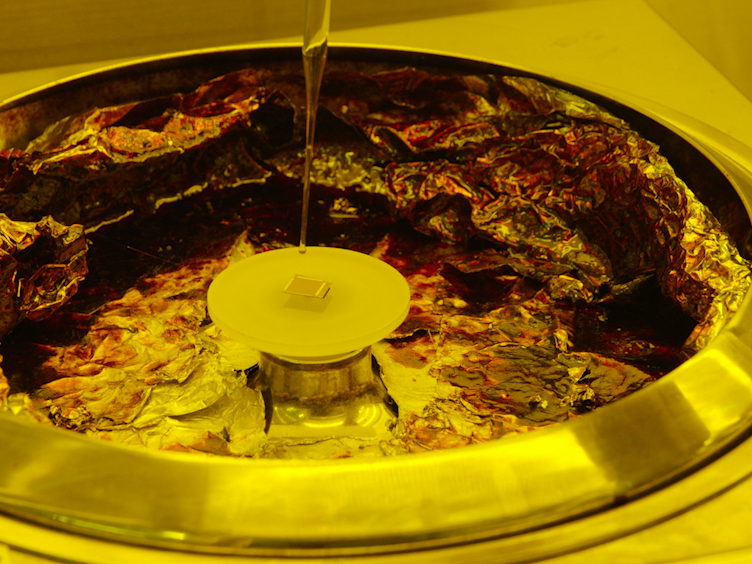