This communication describes methodologies for isolation and culture of alveolar macrophages from humans and murine models for experimental purposes.

The lung microenvironment is a uniquely complex ecosystem with an elaborate air conduit and vasculature. The inhaled air travels through the trachea and through numerous branches of bronchi and bronchioles before reaching the alveoli, where the blood-air gas exchange occurs. Due to direct interaction with the atmosphere, the respiratory surface requires protection from the potentially harmful effects of airborne particles and pollutants. A number of physical, chemical, and immunologic barriers protect the lungs. Notably, deployment of phagocytes at the respiratory surface serves an important first-line defense system. Alveolar macrophages (AMs) are one type of lung-resident phagocytes, and they make up the vast majority of the lung macrophage pool. As their name suggests, AMs are primarily localized to the alveolar lumen and occur as sessile cells that constantly sample the ambient atmosphere and communicate with the alveolar epithelium1. In steady state lungs, more than 95% of the phagocytes in the alveolar space are AMs2, whose composition may alter due to inflammation, infection, or chronic exposure to pollutants.

AMs participate in a wide range of functions that may be local to the lungs and/or of systemic importance. For example, AMs are essential in the development and the optimal functioning of lungs; immune surveillance; and clearance of cellular debris, invading pathogens, and inhaled particles3,4,5,6,7. Targeted depletion of AMs is known to impair clearance of respiratory viruses and bacteria4,8. Besides their role as phagocytes and a first-line defenders of pulmonary homeostasis, AMs are known to function as antigen-presenting cells in eliciting T cell immunity9, potentiating the efficacy of intranasal vaccine10 and influencing lung-restricted autoimmunity after lung transplantation11,12. Deficiency in AM function has been linked to pulmonary alveolar proteinosis (PAP), a condition resulting from a genetic mutation, malignancy or infection that impairs clearance of pulmonary surfactants13,14. Transplantation of AMs is now being explored as a therapeutic approach for treatment of PAP 15,16.

AMs are known to originate during embryogenesis and to persist in the lungs throughout life without being replaced by circulating leukocytes2,17. Although, AM turnover is undetectable in homeostatic lungs, varying levels of AM turnover have been reported in certain clinical conditions including infection by the influenza virus4, myeloablative irradiation18, exposure to endotoxin19, and old age20. AMs are believed to self-renew via a low-grade proliferation17,21, but some recent studies claim that monocytes can give rise to a population of intravascular lung macrophages22,23 under experimental conditions, but functionality of these newly converted pulmonary macrophages have yet to be defined in lung diseases. Furthermore, understanding the threshold of stimulus in the context of AM activation is a potentially interesting area, as the lung attempts to preserve an equilibrium between the inflammatory signals and the immunoregulatory machinery.

The physiologic or pathologic alterations that lead to loss of immune regulation are important to evaluate in various clinical settings (e.g., respiratory infections, inflammatory lung disease and fibrotic lung disease). Nevertheless, AMs are increasingly recognized as indicators or even determinants of pulmonary health11,24. Currently, there are no unified protocols available for harvesting, characterizing, and/or maintaining AMs from humans and preclinical murine models. Lack of a consensus on AM precursors and phenotypes, and absence of a detailed methodology had been the major roadblock in deciphering role(s) of AM in pulmonary health and disease. The following protocol offers a definitive identification, isolation, and in vitro culture strategy that will greatly advance the understanding of AM behavior and facilitate AM-targeted diagnostic and therapeutic studies.

4. In vitro Culture of AMs 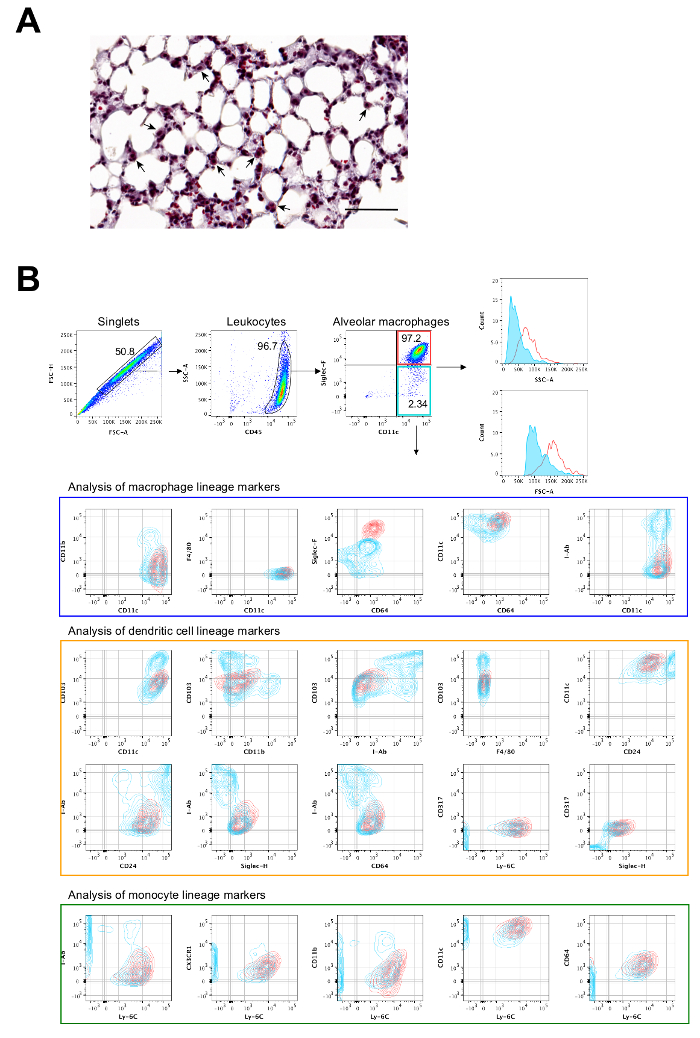 Figure 1: Representative flow cytometric analysis of mouse AMs. (A) Anatomic location of AMs in a mouse lung tissue section (hematoxylin and eosin). AMs are indicated with arrows and the scale bar is 60 μm. (B) Representative flow cytometry gating strategy to identify mouse AMs in BAL cells. Samples were evaluated by a cell analyzer and data were down sampled to 500 events for comparison by the analysis software. Red (CD11chi and Siglec-Fhi) and teal (CD11chi, Siglec-Fint), respectively, are conventional AMs (major population) and monocyte-derived pulmonary macrophages (minor population). Please click here to view a larger version of this figure. 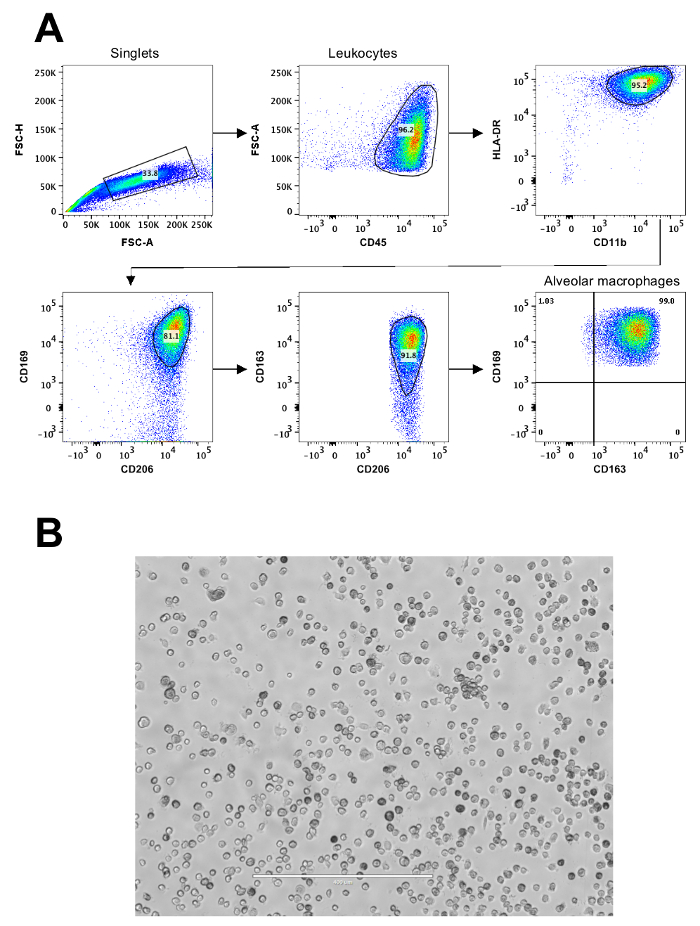 Figure 2: Representative flow cytometric analysis of human AMs. (A) Gating strategy to identify human AMs from BAL fluid from a human lung transplant recipient. (B) Bright field micrograph of human AMs at seven days of culture. The scale bar is 400 μm. Please click here to view a larger version of this figure.

AMs are long-living lung-resident macrophages that populate the lungs beginning at birth and enduring over the entire life span26. Their roles in pulmonary physiology7 and pathology12 and their potential to predict of pulmonary autoimmunity24 have been recognized. Because AMs have a long-term presence in lungs11,27 and because they are involved in activation and progression of immune responses11,24, their role(s) in other chronic inflammatory and fibrotic lung diseases needs to be evaluated. Historically, AMs had a confused identity and were often misidentified. With recently adopted phenotypic markers25,28, it is now feasible to distinguish human and mouse AMs from other pulmonary phagocytes (e.g., interstitial macrophages, pulmonary dendritic cells, and monocyte derived pulmonary macrophages). The methods described here have been optimized for isolation and for in vitro culture of mouse and human AMs. Although these protocols can be broadly adopted for AMs from other species, appropriate phenotypic determination should be conducted to establish a set of "minimally required" surface markers for thorough characterization.

For isolation of murine AMs by lavage, inclusion of chelating agent (i.e., EDTA) and pre-chilling the BAL buffer were found to be important in the current study. Because AMs are adherent to the alveolar wall, use of PBS alone was ineffective in dislodging the cells and produced a significantly lower yield. Securing installation of the catheter to the trachea is another critical step. Care should be taken to ensure a leak-proof attachment that minimizes loss of BAL fluid. Extra caution is needed while lavaging a younger mouse (<6 weeks old), as the structural delicacy of the trachea may result in tearing or leakage during lavage. Installing two consecutive non-overlapping sutures often ensures a secure attachment of the catheter and prevents leaks. Although non-enzymatic dissociation (i.e., with a chelator supplemented buffer) was only performed for AM isolation in this study, it is possible that enzymatic dissociation with collagenase during lung lavage may produce a better AM yield.

The yield of human AM from BAL fluid is variable. AMs constitute nearly 10% of all BAL cells collected from human lung transplant recipients at Norton Thoracic Institute during routine post-lung transplant follow-up, and the total AM yield is dependent on several variables. Such variables include patient's clinical condition, the volume of saline used in lavage, and the volume of BAL fluid processed for AM isolation. Pre-lavage procedures (e.g., needle biopsies) that result in microhemorrhage alter the cellular composition of BAL cells; nevertheless, implementation of phenotypic markers allows for an unambiguous detection and characterization of the human AM pool (Figure 2).

Use of L-929 conditioning medium (a source of M-CSF) was necessary for the in vitro maintenance of AMs. It is our belief that supplementation of purified M-CSF would be sufficient to sustain the AMs in culture; however, an optimized concentration needs to be worked out for both human and mouse AMs. The cultured cells can used for studies on endocytosis, response to inflammation, antigen presentation, maturation/activation status, or any other assay that necessitates maintenance of live cells for a time-course analysis11,24. In the course of this study, it was not attempted to maintain AMs as a continuously cultured line and only short-term terminal studies (<30 days since harvest) were performed. Therefore, an obvious limitation to this method is lack of a long-term culture data, particularly on stability of the cells (i.e., whether AMs can grow as a finite or continuous line, the response of AMs to cryoprotectants and cryopreservation, and phenotypic and/or genotypic drift) after ongoing culture. AMs are long living cells in vivo, and some degree of variation is expected between the cells isolated from healthy lungs and from those undergoing respiratory infection or inflammatory/autoimmune responses.

Overall, the method presented here documents a simplified approach to isolating, characterizing, and maintaining human and mouse AMs in a cell culture system. Although this protocol can be further optimized based on individual experimental needs, it may serve as a beginner's protocol to dissect the functional relevance of AMs in respiratory diseases and pulmonary medicine.

The authors have no conflicts of interest to declare.

We thank Clare Prendergast for assistance with editing the manuscript. DKN is supported by a research grant (#2095) from the Flinn Foundation and TM is supported by grants from National Institutes of Health (R01HL056643 and R01HL092514). DKN developed the methods, designed the study and wrote the manuscript; OM assisted with animal studies and clinical sample procurement; SB assisted with Flow cytometric analysis and cell sorting; TM supervised the studies and reviewed the manuscript. 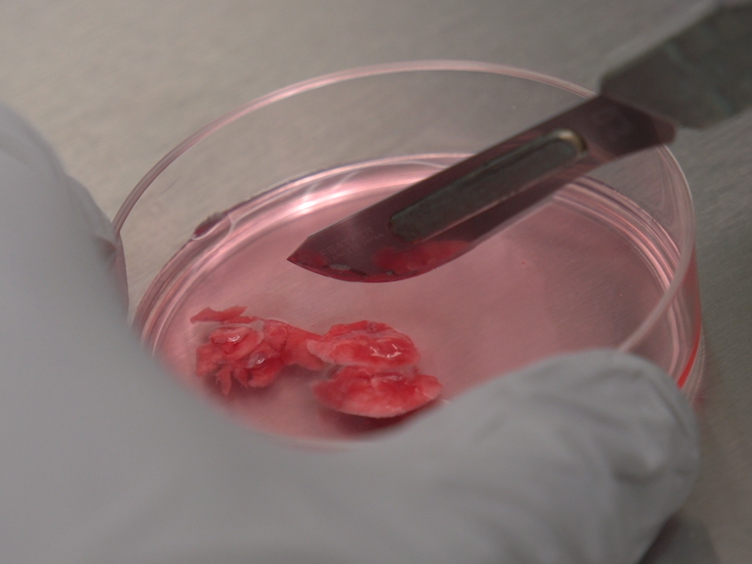