The granulocyte-macrophage-colony-stimulating factor (GM-CSF)-producing T helper (THGM) cell is a newly identified T helper cell subset that predominantly secretes GM-CSF without producing interferon (IFN)γ or interleukin (IL)-17 and is found to play an essential role in the autoimmune neuroinflammation. A method of isolation of naive CD4+ T cells from a single-cell suspension of splenocytes and THGM cell generation from naive CD4+ T cells would be a useful technique in the study of T cell-mediated immunity and autoimmune diseases. Here we describe a method that differentiates mouse naive CD4+ T cells into THGM cells promoted by IL-7. The outcome of the differentiation was assessed by the analysis of the cytokines expression using different techniques, including intracellular cytokine staining combined with flow cytometry, a quantitative real-time polymerase chain reaction (PCR), and enzyme-linked immunosorbent assays (ELISA). Using the THGM differentiation protocol as described here, about 55% of the cells expressed GM-CSF with a minimal expression of IFNα or IL-17. The predominant expression of GM-CSF by THGM cells was further confirmed by the analysis of the expression of GM-CSF, IFNα, and IL-17 at both mRNA and protein levels. Thus, this method can be used to differentiate naive CD4+ T cells to THGM cells in vitro, which will be useful in the study of THGM cell biology.

CD4+ T helper (TH) cells are essential components of the immune system, having crucial roles in the host defense against microbial pathogens, in cancer surveillance, and in autoimmunity1,2,3. Upon T cell receptor (TCR) activation, naive CD4+ T cells can be differentiated into TH1, TH2, TH 17, or regulatory T (Treg) cells under the influence of different cytokine milieus2,4,5. Recently, a new subset of TH cells, which predominantly produces GM-CSF, was identified and named THGM6. The differentiation of THGM cells is driven by IL-7 through the activation of a signal transducer and an activator of transcription 5 (STAT5). These cells express a large amount of GM-CSF while having a low expression of other TH-cell signature cytokines such as IFNγ and IL-176. GM-CSF was found to play a critical role in the development of CD4+ T cell-mediated neuroinflammation7,8. Compared to IFNγ- or IL-17-expressing autoreactive T cells, GM-CSF-expressing T cells transferred to wild-type (WT) mice caused an earlier disease onset and higher disease severity. In addition, Csf2-/- T cells failed to induce experimental autoimmune encephalomyelitis (EAE) after being adoptively transferred to WT recipients, whereas T cells lacking IFNγ or IL-17A retained the ability to mediate EAE7. Moreover, a blockade of GM-CSF using neutralizing antibodies ameliorated EAE disease severity8. Furthermore, a deficiency of STAT5 in T cells in mice resulted in a diminished THGM generation and, hence, in a resistance of the mice to EAE development6. These findings underscore the importance of GM-CSF-expressing TH cells in autoimmune neuroinflammatory disease. Thus, establishing a method to differentiate GM-CSF-expressing TH cells from naive CD4+ T cells would be important in the study of the pathogenesis of autoimmune neuroinflammation and T cell-mediated immune responses. However, a protocol that efficiently generates THGM cells from murine naive CD4+ has not been established.

Here we present a method that differentiates murine THGM cells from naive CD4+ T cells. This protocol describes the whole procedure, including the extraction of the spleen from the mouse, the preparation of a single-cell suspension, the CD4 positive selection, the fluorescence-activated cell sorting (FACS), and the TH cell differentiation and analysis. The differentiated T helper cells are analyzed by intracellular cytokine staining combined with flow cytometry to determine the cytokine expression at the single-cell level, by a quantitative real-time PCR to determine the cytokine expression at mRNA level, and by ELISA to assess the cytokine expression at protein level. This method can be applied to studies of THGM cell biology under various conditions, such as EAE, where GM-CSF plays an important role in pathogenesis.

5. Analysis of the Mouse THGM Cells Generated In Vitro 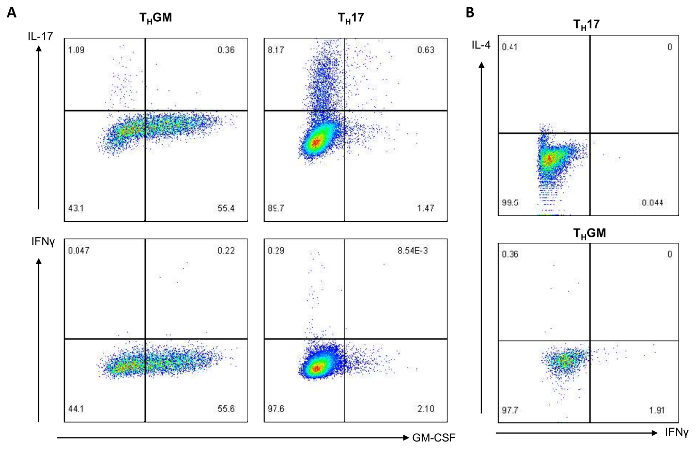 Figure 1: THGM cells predominantly express GM-CSF. THGM and TH17 cells were harvested on day 3 after the differentiation. (A) For 5 h, the cells were restimulated with PMA and ionomycin in the presence of a protein transport inhibitor. The expression of GM-CSF, IL-17, and IFNγ was analyzed by intracellular cytokine staining followed by flow cytometry. (B) The IL-4 and IFNγ expression by TH17 or THGM cells was analyzed. Please click here to view a larger version of this figure. 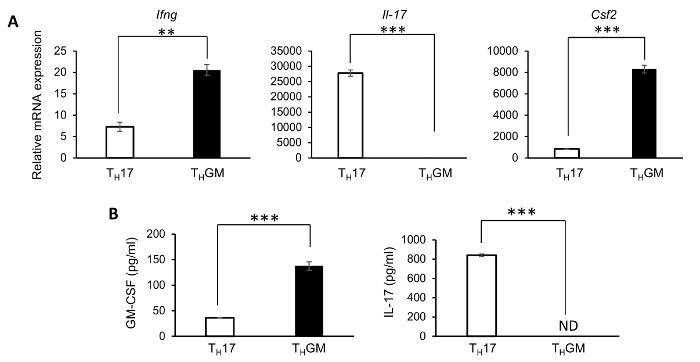 Figure 2: Expression of IL-17, IFNγ, and GM-CSF in TH17 and THGM cells. THGM and TH17 cells were harvested and restimulated with plate-bound anti-CD3e, 3 days after the differentiation. (A) Cells were harvested to isolate RNA for cDNA preparation, 3 h after the stimulation. The expressions of Ifng, Il-17, and Csf2 were determined by a quantitative real-time PCR (qPCR). (B) The culture supernatant was harvested at 24 h after the stimulation, to determine the concentration of GM-CSF in THGM cells, or IL-17 in TH17 cells, by ELISA. (** p <0.01, *** p <0.001.) Please click here to view a larger version of this figure.

Figure 3: Rorc, Stat3, and Stat5 gene expression in TH17 and THGM cells. Differentiated THGM and TH17 cells were harvested and restimulated with plate-bound anti-CD3e for 3 h. Total RNA was isolated to prepare cDNA. The Rorc, Stat3, and Stat5 expressions were determined by qPCR. (* p <0.05, ** p <0.01; NS = not significant.) Please click here to view a larger version of this figure.

Here we described a protocol of an in vitro THGM differentiation from mouse naive CD4+ cells, followed by an analysis of the differentiated cells to validate the method. Of note, both spleen and lymph nodes can be used for naive CD4+ T cell purification and THGM differentiation. The cytokine expression determined by intracellular cytokine staining combined with flow cytometry showed that about 55% of the cells were induced to become GM-CSF-expressing cells under the THGM condition (Figure 1A). Compared to cells under the TH17 differentiation condition, the cells that differentiated under the THGM condition contained a background level of an IL-17-expressing population; however, the il17 gene expression is undetectable by qPCR (Figure 2A).

Interestingly, despite the addition of an IFNγ neutralizing antibody, we detected a low level of Ifng mRNA expression in both the TH17 and the THGM cells, and less than 1% of the THGM cells were IFNγ-expressing cells. (Figures 1 - 2). This could be due to the insufficient amount of IFNγ-neutralizing antibody used in the THGM condition, or to a possible contamination of innate immune cells (it is almost impossible to obtain 100% pure naive CD4+ T cells) that provided a trace amount of IL-12 for the possible TH1 cell generation. It is also possible that the THGM condition we used was not able to completely shut off the transcription of Ifng. We will address this issue in future. Nevertheless, IFNγ protein was not detected in the culture supernatants of THGM or TH17 by ELISA.

In the protocol presented here, we only used an IFNγ-blocking antibody together with IL-7 for the THGM differentiation. After 3 days of differentiation under this condition, more than 50% of the cells expressed GM-CSF, but not IL-17, IL-4, or IFNγ (Figure 1). In addition, the expression of Rorc, the gene that encodes RORγt, which is critical for the Th17 differentiation9, was significantly lower in the THGM cells compared to that in the TH17 cells (Figure 3). This protocol is, therefore, a more efficient method for the generation of GM-CSF-expressing T cells than another reported previously10. Our results also demonstrated that, in addition to the purity of naive T cells and IL-7 signaling, the prevention of the IFNγ-expressing T cell differentiation is a key for THGM generation.

The predominant expression of the GM-CSF cells that were generated using the described protocol demonstrated the successful differentiation of THGM. We would like to point out that the quality of cytokines and antibodies from different companies or even of different batches from the same company may not be the same. Therefore, we recommend that the number of cytokines and antibodies used in T helper cell differentiation should be tested in order to find out the optimal condition.

In summary, THGM cells that were generated using this protocol express a minimal level of IL-17, IL-4, or IFNγ. We are confident that this protocol works well in generating GM-CSF-expressing THGM cells in vitro. This method can be used to further study the biology of THGM cells in various conditions such as autoimmune neuroinflammation, including experimental autoimmune encephalomyelitis (EAE) in mice and human multiple sclerosis, where GM-CSF plays an important role in the pathogenesis11. 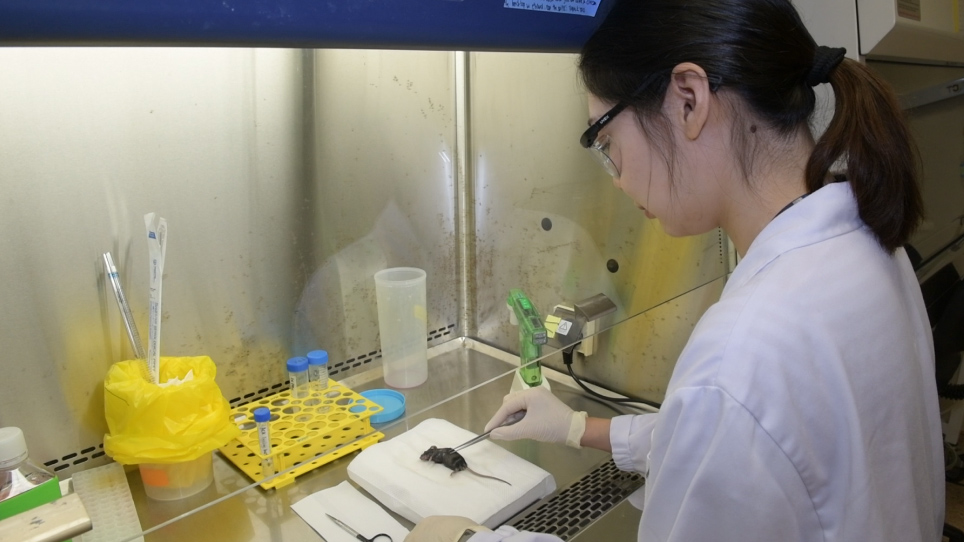