Pluripotent stem cells offer great potential for understanding heart development and disease and for regenerative medicine. While recent advances in developmental cardiology have led to generating cardiac cells from pluripotent stem cells, it is unclear if the two cardiac fields - the first and second heart fields (FHF and SHF) — are induced in pluripotent stem cells systems. To address this, we generated a protocol for in vitro specification and isolation of heart field-specific cardiac progenitor cells. We used embryonic stem cells lines carrying Hcn4-GFP and Tbx1-Cre; Rosa-RFP reporters of the FHF and the SHF, respectively, and live cell immunostaining of the cell membrane protein Cxcr4, a SHF marker. With this approach, we generated progenitor cells which recapitulate the functional properties and transcriptome of their in vivo counterparts. Our protocol can be utilized to study early specification and segregation of the two heart fields and to generate chamber-specific cardiac cells for heart disease modelling. Since this is an in vitro organoid system, it may not provide precise anatomical information. However, this system overcomes the poor accessibility of gastrulation-stage embryos and can be upscaled for high-throughput screens.

The use of pluripotent stem cells (PSCs) has revolutionized the field of cardiac regeneration and personalized medicine with patient-specific myocytes for disease modeling and drug therapies1,2,3,4. More recently, in vitro protocols for the generation of atrial vs ventricular as well as pacemaker-like PSC-derived cardiomyocytes have been developed5,6. However, whether cardiogenesis can be recreated in vitro to study cardiac development and subsequently generate ventricular chamber-specific cardiac cells is still unclear.

During early embryonic development, mesodermal cells under the influence of secreted morphogens such as BMP4, Wnts and Activin A form the primitive streak7. Cardiac mesodermal cells marked by the expression of Mesp1, migrate anteriorly and latterly to form the cardiac crescent and then the primitive heart tube7,8. This migratory group of cells includes two very distinct populations of cardiac progenitor cells (CPCs), namely the first and the second heart field (FHF and SHF)9,10. Cells from the SHF are highly proliferative and migratory and are primarily responsible for the elongation and looping of the heart tube. Additionally, SHF cells differentiate to cardiomyocytes, fibroblasts, smooth muscle and endothelial cells as they enter the heart tube to form the right ventricle, right ventricular outflow tract and large part of both atria7,10. In contrast, FHF cells are less proliferative and migratory and differentiate mainly to cardiomyocytes as they give rise to the left ventricle and a smaller part of the atria11. Moreover, SHF progenitors are marked by the expression of Tbx1, FGF8, FGF10 and Six2 while FHF cells express Hcn4 and Tbx511,12,13,14,15.

PSCs can differentiate to all three germ layers and subsequently to any cell type in the body4,16. Therefore, they offer tremendous potential for understanding heart development and for modelling specific developmental defects resulting in congenital heart disease, the most frequent cause of birth defects17. A large subgroup of congenital heart disease includes chamber-specific cardiac abnormalities18,19. However, it still unclear whether these originate from anomalous heart field development. In addition, given the inability of cardiomyocytes to proliferate after birth, there have been extensive efforts to create cardiac tissue for heart regeneration1,7,20. Considering the physiological and morphological differences between cardiac chambers, generation of chamber-specific cardiac tissue using PSCs is of significant importance. While recent advances in developmental cardiology have led to robust generation of cardiac cells from PSCs, it is still unclear if the two heart fields can be induced in PSC systems.

To recapitulate cardiogenesis in vitro and study the specification and properties of CPCs, we previously used a system based on differentiating PSC-derived cardiac spheroids21,22,23,24. Recently, we generated mouse embryonic stem cells (mESCs) with GFP and RFP reporters under the control of the FHF gene Hcn4 and the SHF gene Tbx1, respectively (mESCsTbx1-Cre; Rosa-RFP; HCN4-GFP) 25. In vitro differentiated mESCs formed cardiac spheroids in which GFP+ and RFP+ cells appeared from two distinct areas of mesodermal cells and patterned in a complementary manner. The resulting GFP+ and RFP+ cells exhibited FHF and SHF characteristics, respectively, determined by RNA-sequencing and clonal analyses. Importantly, using mESCs carrying the Isl1-RFP reporter (mESCIsl1-RFP), we discovered that SHF cells were faithfully marked by the cell-surface protein CXCR4, and this can enable isolation of heart field-specific cells without transgenes. The present protocol will describe the generation and isolation of heart field-specific CPCs from mESCs, which may serve as a valuable tool for studying chamber-specific heart disease.

After approximately 132 h of differentiation, Tbx1-RFP and Hcn4-GFP CPCs can be detected using a fluorescent microscope (Figure 2). Generally, GFP and RFP cells appear approximately around the same time. The two populations of CPCs continue to expand in close proximity and commonly in a complementary pattern. Adjusting the concentrations of Activin A and BMP4 will alter the percentages of FHF vs SHF CPCs (Figure 3). CPC specification in vitro was primarily determined by the concentration of BMP4. Therefore, our cardiac spheroid system can be used to study CPC specification.

Similarly using the Isl1-RFP reporter mESC line, after 132 h of differentiation, Isl1-RFP+ CPCs appear. After immunostaining of CPCs for CXCR4, Isl1-RFP+, Cxcr4+ vs Isl1-RFP+, Cxcr4- cells can be isolated (Figure 4).

To analyze the ability of mESC-derived CPCs to differentiate to cardiomyocytes, immunostaining for cardiac Troponin T can be performed at day 12 of differentiation. In agreement with the model that FHF cells differentiate mainly to myocytes, cells derived from Hcn4-GFP+ CPCs are mainly myogenic (Figure 5A, B). Similarly, cells derived from Isl1+, CXCR4- CPCs also give rise to cardiomyocytes at much higher percentages in comparison to Isl1+, CXCR4- CPCs (Figure 5C). 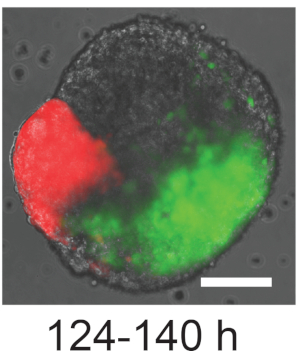 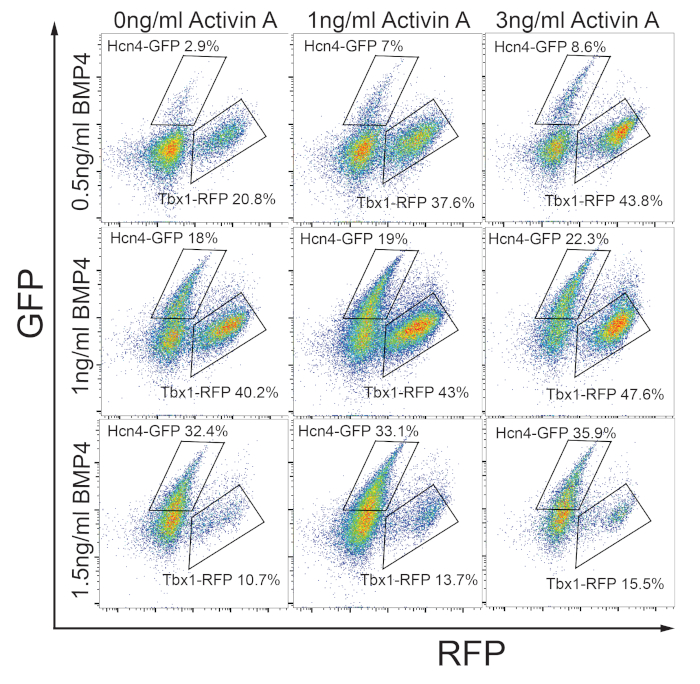 Figure 3: Flow cytometric analysis of cardiac spheroids after exposure to different concentrations of Activin A and BMP4. Adjusting the concentrations of the two morphogens leads to different percentages of Tbx1+ and Hcn4+ CPCs. The two populations were mainly affected by adjusting BMP4 concentration. Please click here to view a larger version of this figure.

Figure 4: Flow cytometric analysis of cardiac progenitor cells expressing Isl1 and are immunostained for Cxcr4. Cardiac progenitors were first gated based on their Isl1 expression and then Isl1+, Cxcr4+ vs Isl1+, Cxcr4- cells were sorted. Please click here to view a larger version of this figure. 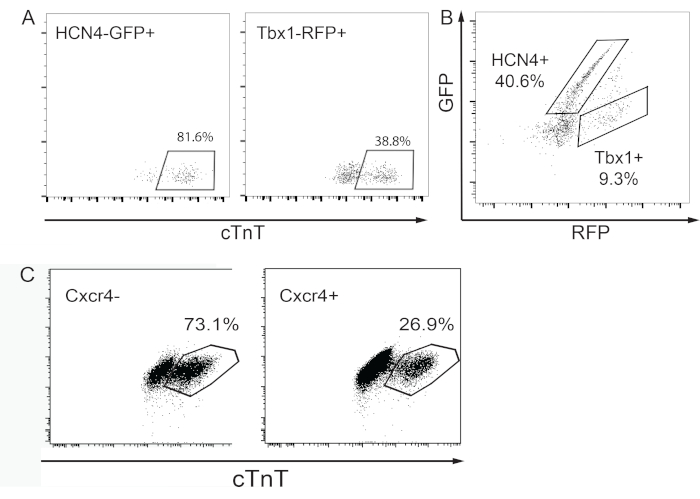 Figure 5: Flow cytometric analysis of cells derived from heart field-specific CPCs stained for cardiac Troponin T. (A) Consistent with the higher myogenic potential of FHF cells, a high percentage of Hcn4-GFP+ cells differentiate to myocytes. (B) Analysis of all mESC-derived cardiomyocytes, where the vast majority are Hcn4-GFP+. (C) Cxcr4- CPCs differentiate to a higher percentage of cardiomyocytes. Please click here to view a larger version of this figure. 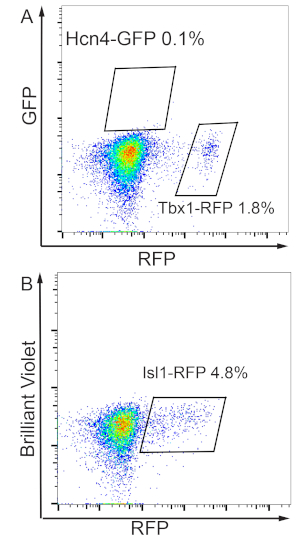 Figure 6: Representative cytometric analyses of failed/low efficiency in vitro differentiations. (A) Flow cytometry analysis after 132 h of differentiation showing no formation of Hcn4-GFP cells and a very low percentage of Tbx1-RFP+ cells. (B) Low differentiation efficiency of mESCs expressing very low levels of Isl1. Please click here to view a larger version of this figure.

In our protocol, we describe a methodology to generate cardiac spheroids and isolated heart field-specific CPCs. Those can be used to study mechanisms of CPC specification and their properties, as well as for cardiac chamber-specific disease modelling. One previously published work used a mESC line with two fluorescent reporters (Mef2c/Nkx2.5) to study cardiogenesis in vitro, however, both those markers are expressed at embryonic day 9.5-10 when cardiomyocytes are already formed26. To our knowledge, there are currently no methods for the isolation of heart field-specific CPCs in vitro. More importantly, our protocol can also be applied to human stem cells, where CXCR4 can be used to isolate SHF CPCs that express high levels of Isl125. In addition, our double, fluorescent reporter mESC line can be used to screen libraries of compounds and transcription factors that can affect heart field specification or cell polarity in CPCs.

One of the critical steps in the protocol is the starting number of mESCs. Using low or high numbers will significantly affect the size of cardiac spheroids and differentiation efficiency. We recommend testing different cell numbers (7.5-10 x 104 cells/mL) for different mESC lines. Alternatively, if the size of the cardiac spheroids remains significantly variable, plates with wells containing microwells of specified size can also be used to increase reproducibility. Investigators should also be mindful of the specific timing and duration of mesodermal induction as well as the timing of cell sorting. Moreover, for different mESC lines, optimization of the morphogen concentrations will need to be performed prior to testing their ability to generate CPCs in cardiac spheroids. The use of older/expired cytokines or cell culture medium, or inconsistent concentrations of morphogens will affect the differentiation efficiency. Finally, mESC lines that have been passaged for more than ~15-20 times, do appear to lose their ability to differentiate efficiently.

Our differentiation system allows specific modifications. Cxcr4 can be used as a sole marker of SHF CPCs in mESC lines without a fluorescent reporter. However, investigators should still optimize the differentiation protocol to increase the percentage of Isl1+ CPCs prior to sorting Cxcr4+ vs Cxcr4- CPCs25. In addition, Activin A can be substituted with canonical Wnt agonists/activators such as Wnt3a or CHIR99021 (GSK3b inhibitor) to increase further the specification of SHF CPCs25.

This protocol enables the study of CPC specification using well-defined conditions, time-lapse monitoring, and unrestricted numbers of cells. Thus, it is more facile, efficient and less costly in comparison to analyzing embryos. Nevertheless, it is still an in vitro system where the absolute gene expression values of heart-field specific CPCs may not tightly correlate with in vivo gene expression levels. Thus, in our system, solely BMP4 could specify CPCs from both heart fields and can significantly alter their respective ratios. Additionally, variability may exist regarding the differentiation efficiencies.

The authors have nothing for disclosures. 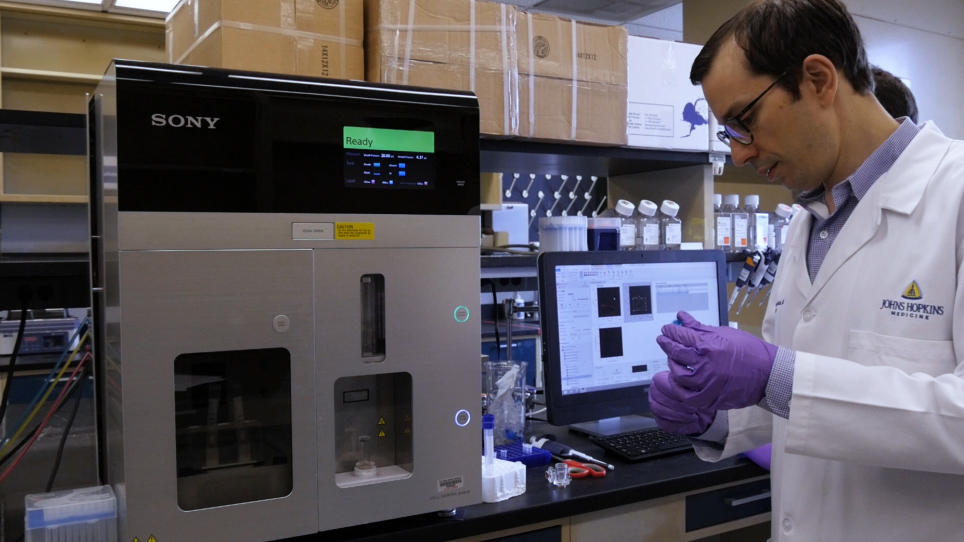