Ischemia-reperfusion injury is the main cause of flap failure in reconstructive microsurgery. The rat is the preferred preclinical animal model in many areas of biomedical research due to its cost-effectiveness and its translation to humans. This protocol describes a method to create a preclinical free skin flap model in rats with ischemia-reperfusion injury. The described 3 cm x 6 cm rat free skin flap model is easily obtained after the placement of several vascular ligatures and the section of the vascular pedicle. Then, 8 h after the ischemic insult and completion of the microsurgical anastomosis, the free skin flap develops the tissue damage. These ischemia-reperfusion injury-related damages can be studied in this model, making it a suitable model for evaluating therapeutic agents to address this pathophysiological process. Furthermore, two main monitoring techniques are described in the protocol for the assessment of this animal model: transit-time ultrasound technology and laser speckle contrast analysis.

Microsurgical reconstructions are ideal for a wide variety of defects caused by traumatic injuries, burns, or oncological resections. However, there is a low percentage of free flap failure, among which ischemia-reperfusion (I/R) injury is one of the main responsible factors. All microsurgically transferred tissues endure a mandatory period of ischemia followed by the reperfusion. This period of primary ischemia is usually well tolerated; thus, the success rate of microsurgical procedures exceeds 90%1,2. However, only 63.7% of flaps requiring surgical revision can be completely saved3. In addition, in cases of replantation of finger avulsion injuries, the success rate is 66%4; and in cases of composite tissue allotransplantation suffering I/R injury, rejection percentages are increased since the I/R injury activates innate immunity5,6.

Therefore, the study of this pathophysiological phenomenon is of interest. Animal models are essential for investigating physiological mechanisms and assessing novel therapies before it can be applied to humans7. Vessel anatomy and the physiological similarities between rats and human beings make rats an ideal model for the investigation of biological processes such as I/R injury.

Here, we present a detailed protocol for the creation of a rat free skin flap model with I/R injury, as well as different possibilities for intra- and postoperative assessments. The overall goal of this method is to describe a useful preclinical model to study I/R injury and possible treatments to reduce its related damages.

All procedures were conducted in accordance with the ethical committee of the Jesús Usón Minimally Invasive Surgery Centre and the welfare guidelines of the regional government that are based on European legislation.

Figure 1: Transit-time ultrasound blood flow assessment. (A) Position of the microsurgical flow probe to assess blood flow. (B) Blood flow pattern and quantification obtained of the anastomosed vessels of the flap pedicle. Please click here to view a larger version of this figure.

Observation of the microcirculatory deprivation of blood flow during the ischemic insult was possible with the LASCA technique, including the immediate hyper perfusion during the flap reperfusion, and, perioperatively, the different areas with less perfusion and a higher risk of postoperative flap necrosis that were indeed necrotized 7 days after the end of the study (Figure 2).

The flap survival area after 8 h of ischemia and its subsequent reperfusion was around 40%. Previously published results9 showed statistically significant differences when this model was compared with flaps where no ischemic insult was inflicted.

Microsurgical free tissue transfers have become the method of choice for reconstructing large defects. A period of ischemia occurs during such free tissue transfers. When this period exceeds the tissue’s tolerance, I/R injury can cause failure of the practiced free flap9. The description of the methodology to develop a cost-effective and translational preclinical model to study I/R injury in reconstructive microsurgery may help lead the study of different compounds to counteract this pathophysiological process.

In the described animal model, after the vascular ligatures were placed and the free flap was raised, no hindlimb blood flow compromises were noted, nor pain or limp. As Kochi et al.10 described, our model also left three collateral routes through intramuscular networks.

Monitoring of free flaps is of major importance11, as salvage is inversely related to the duration between ischemia onset and its clinical recognition. For this purpose, free flaps should be studied intra- and postoperatively.

Intraoperatively, the widely used empty and refill test or the acoustic Doppler enable identification but not quantification of flow presence or absence through an anastomosis12. For this reason, we used transit-time ultrasound technology, a novel method that allows surgeons to quantify the blood flow of microsurgical anastomoses13. In our study, all microsurgical anastomoses were patent after 8 h of ischemic insult as well as at the end of the study. Immediately after the creation of the microsurgical anastomoses, we noted higher blood flow volumes than the minimums recommended in literature8. This predicted good pedicle perfusion at the end of the study, demonstrating that the results were not influenced by the microsurgical technique but rather by the I/R injury cascade of events. However, this technique is not free of limitations. To obtain reliable results, the microsurgical probes must be held neutral to the plane of the vessel, not pulling it or creating any tension. A good acoustic coupling is needed to obtain a proper signal, which can be achieved using ultrasonic gel or saline. A high-quality coupling signal, provided by the equipment, is an important parameter to consider during the measurements.

We have used LASCA, also known as laser speckle contrast imaging or laser speckle imaging, postoperatively14. This technology represents a valuable technique for semi-quantitative real-time mapping of flow within free flaps as verified here. One of the limitations is that the results are provided in arbitrary units and not directly related to actual flow values. In this sense, further research is needed to validate this correlation. Laser Doppler flowmetry is more commonly used but limited by the fact that it only measures perfusion in a single point in the flap, whereas LASCA allows the detection of regional changes in skin perfusion within the flap15. Furthermore, a recent study16 indicated that LASCA may perioperatively predict the regions at high risk of postoperative flap necrosis. Our results suggest that LASCA is a promising technique for the peri- and postoperative monitoring of free flaps.

The research project was performed at the Jesús Usón Minimally Invasive Surgery Center (CCMIJU), part of the ICTS Nanbiosis. The study was performed with assistance from the following Nanbiosis units: U21, experimental operating room; U22, animal housing; and U14, cell therapy. This work was supported by ISCIII project PI16/02164. The funder had no role in the study design, data collection and analysis, decision to publish, or manuscript preparation. Special thanks are extended to María Pérez for preparing the figures and to Fernanda Carrizosa for providing constant encouragement and supporting the scientific bibliography. 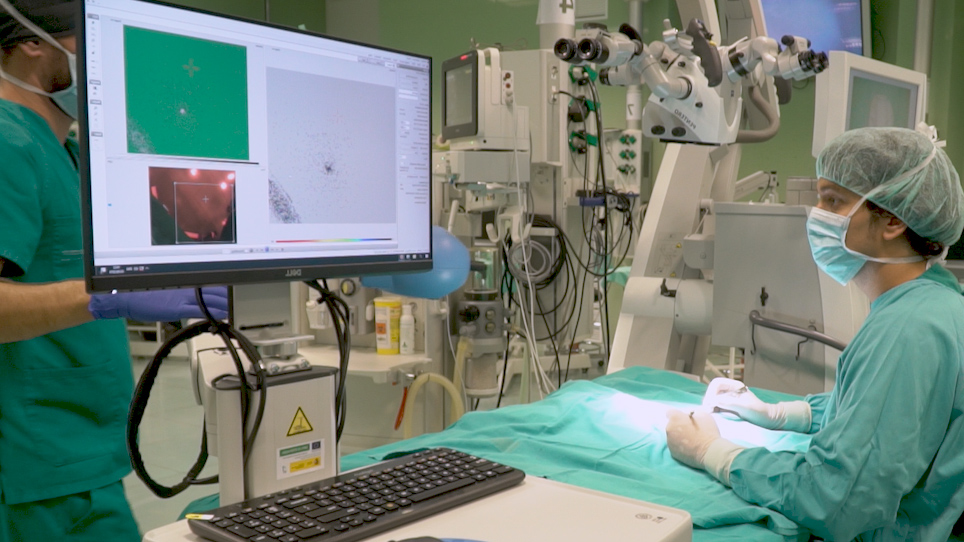