Human pluripotent stem cells (hPSCs) represent an unlimited source of somatic cells for research or the clinic1. Gene targeting in hPSCs offers a powerful method to study gene function during cell specification and to understand mechanisms of disease. Although efficient genome editing methods exist, modifying genes in hPSCs remains technically challenging. Standard gene targeting by homologous recombination in hPSCs occurs at low frequency or is even undetectable at some genes2, and DNA double-strand break (DSB) stimulated gene targeting (termed gene editing) is therefore necessary in these cells2,3. Additionally, transfection of hPSCs and subsequent single-cell cloning is not very efficient, even though single cell-associated apoptosis can be reduced through the use of the Rho-associated protein kinase (ROCK) inhibitor4. Finally, the potential on-target and off-target mutations at the gene of interest can also be problematic. Hence, a reliable protocol is essential to make tailored genetic changes in hPSCs.

The RNA-guided CRISPR (Clustered Regularly Interspaced Short Palindromic Repeats) and CRISPR associated protein 9 (Cas9) technology is now a well-established tool in gene editing. Transcribed CRISPR RNA (crRNA) and a trans-activating RNA (tracrRNA) form the single guide RNA (sgRNA), which complexes with Cas9 protein allowing gene specific cleavage5. The CRISPR/Cas9 system is programmable, by changing a 20-bp guide sequence of the sgRNA, meaning almost any locus that fulfils the protospacer-adjacent motif (PAM) requirement can be edited. However, the wild type Cas9 can tolerate some mismatches between its guide sequence and a DNA target, which might cause unwanted off-target effects. To improve its specificity, a nickase mutant (Cas9n) has been developed. A Cas9n containing D10A or N863A mutation only possesses one functional nuclease domain and as a result can only nick DNA on one strand. A pair of Cas9n appropriately spaced and oriented can effectively induce DNA DSB and the off-target effects are dramatically reduced6. To ensure efficient Cas9n modification, it has been shown that two Cas9n-sgRNA should ideally be placed with a -4 to 20 bp offset and always create a 5' overhang6.

Cas9(n)-sgRNA induced DSB can be utilized for genome editing in hPSCs7,8. It can create gene knockout via non-homologous end joining repair, or introduce gene modification through homology-directed repair (HDR) if a donor DNA template is present. The protocol described here uses a piggyBac transposon-based donor plasmid (or targeting vector) for HDR, in which a drug resistance marker is flanked by the transposon inverted repeats. The advantage of this approach includes efficient screening and seamless gene editing as firstly demonstrated by Yusa et al.9,10. The drug selection cassette allows enrichment of cells with the integrated vector, which are subsequently screened by junction PCR to identify those derived by HDR. In addition, the drug selection cassette can be positioned to replace the target sequences for Cas9(n) cleavage, so no further DNA breakage occurs after HDR, thus eliminating 'on' target mutations resulting from Cas9(n) re-cleavage. Furthermore, by exploiting the precise excision catalyzed by piggyBac transposase, the selection marker is then excised from the genome without leaving a scar. Only the original endogenous TTAA sequence for piggyBac insertion remains after the removal of the drug selection marker9. Even if the TTAA sites have to be created by introducing substitutions, the chances of disturbing regulatory elements are reduced compared to other methods10.

Here we describe detailed procedures for implementing seamless genome editing in hPSCs. Combining a piggyBac-based donor plasmid and the CRISPR-Cas9 nickase mutant in a two-step genetic selection, we introduced two predetermined point mutations into the hepatocyte nuclear factor 4 alpha (HNF4α) gene11. This approach is reliable and efficient, and has permitted in-depth analyses of the important roles played by HNF4α in endoderm and hepatocyte specification from human pluripotent stem cells11.

Genetic editing in human pluripotent stem cells
To screen for correctly targeted cells, a three primer-based PCR method was used for genotyping (Figure 2). Sanger sequencing was performed to confirm the PCR results (Figure 3A). Post removal of the selection cassette, the modified region was sequenced again to confirm the correct introduction of desired point mutations (Figure 3B).

Colony establishment and characterization of edited human pluripotent stem cells
Colonies with the correct genotype were selected and expanded as needed. The established colonies need to be characterized before being used for further analysis. The edited cells possess the same morphology as the parental cells (Figure 4A). They also express representative human pluripotent stem cell markers, including transcription factors NANOG and OCT4 (Figure 4B), as well as cell surface markers SSEA4 and TRA-1-60 (Figure 4C).

Figure 1: Targeting vector-based knock-in strategy11. A pair of Cas9n-sgRNA expression plasmids were used to induce DNA double-strand break in exon 8 of the HNF4α gene. A targeting vector with a selection cassette was used to introduce predetermined point mutations located 16 bp and 22 bp away. This selection cassette was contained within the piggyBac transposon, consisting of a positive-negative selection marker (puro-deltaTK) driven by a constitutively active promoter (PGK). Via homology-directed repair pathway, the targeted cells incorporated the selection cassette. Transposon excision mediated by transposase results in a seamless modification with only the point mutations present. Red cross indicates the location of desired point mutations. HA = homology arm; PB = piggyBac; PM = point mutation. Please click here to view a larger version of this figure. 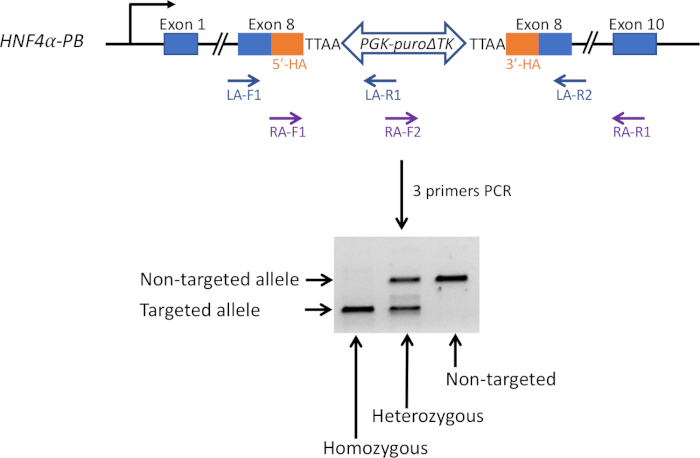 Figure 2: Three primer-based PCR method. To screen gene targeted cells, PCR-based genotyping was used. Three primers, LA-F1, -R1 and -R2 were used to amplify the left homology arm region. Independently, RA-F1, -F2 and -R1 were used to amplify the right homology arm region. Based on the gel electrophoresis result, non-targeted cells, and heterozygous and homozygous cells, were distinguished from each other. Please click here to view a larger version of this figure.

Figure 3: Sequencing results of genetically modified cells11. PCR products from two clones were sequenced and confirmed the correct insertion of the selection cassette at the targeted locus (A). 5' and 3' piggyBac inverted terminal repeats (ITR) were flanked by the TTAA direct repeats. Three clones were sequenced post transposon excision (B). A pair of Cas9n-sgRNA with 11 bp offset was used to introduce DNA double-strand break. Two predetermined point mutations (A to G and A to C) were introduced into the gene. One synonymous mutation was introduced to mutate the protospacer-adjacent motif (PAM), and another one to create the TTAA site necessary for piggyBac excision. Please click here to view a larger version of this figure. 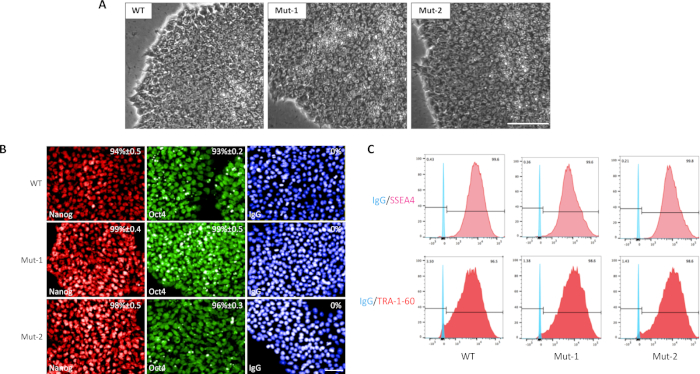 Figure 4: Characterization of edited human pluripotent stem cells. Morphology of two edited cell lines and the parental cells (A), scale bar = 100 µm. The expression of pluripotent stem cell markers NANOG and OCT4 examined by immunostaining (B, scale bar = 50 µm), in addition to SSEA4 and TRA-1-60 by flow cytometry (C) in two modified cell lines and the parental cells. IgG was used as a negative control. DAPI was used to stain the nucleus. The percentages were calculated as the average of three independent experiments. Please click here to view a larger version of this figure.

The protocol described herein can be used to introduce predetermined point mutations into an endogenous locus in hPSCs. The combination of a piggyBac-based targeting vector and paired CRISPR/Cas9n expression plasmids proved to be reliable and efficient11. Following HNF4α gene editing, 12 out of 43 analyzed clones were correctly targeted as determined by junction PCR screening. Specifically, the biallelic targeting efficiency was about 21% (9/43) and the monoallelic targeting efficiency was around 7% (3/43).

Following targeting experiments, it is crucial to maintain puromycin selection to keep the targeted locus accessible to the piggyBac transposase during the first round of screening. This will minimize the silencing of the PGK promoter-driven puro-deltaTK selection cassette and reduce the background in the second round of screening10. A recent report showed that CAG promoter is more resistant to silencing than PGK promoter in hPSCs14. Changing the promoter for the selection cassette could therefore improve this system in the future. It is also important to compare the number of resistant colonies from hyPBase- and GFP-transfected cells. Upon successful removal of the transposon, there should be more surviving colonies from the hyPBase- than GFP-transfected cells. In addition to PCR analysis of transposon excision, direct sequencing of the modified region is required to confirm the excision fidelity.

Based on Yusa's piggyBac transposon-based targeting vector strategy9,10, the procedures detailed above focused on improving hPSCs nucleofection and single cell cloning efficiency. Cell seeding density was optimized to reduce the likelihood of heterogeneous colony formation. We also employed 10-12 days culture under 10% CO2 to enhance colony production for genotype screening. In our experience, around 20 colonies could be obtained from each 96-well plate. Although this step might take more time than other methods, it is reliable and highly efficient.

Based on the need, targeting vectors can be designed to introduce or correct point mutations, to create reporter cell lines, as well as knockout gene expression. In conclusion, the combination of the CRISPR/Cas9(n) system and a targeting vector is an efficient way to deliver different types of genetically modified hPSCs.

D.C.H is a co-founder, shareholder, and director of Stemnovate Limited.

We thank Kosuke Yusa for sharing the pMCS-AAT_PB-PGKpuroTK and pCMV-hyPBase plasmids. We thank Jia-Yin Yang and Karamjit Singh-Dolt for helpful discussions on genome editing. D.C.H. lab is supported by an award from the Chief Scientist Office (TC/16/37) and the UK Regenerative Medicine Platform (MR/L022974/1). Y.W. was supported by a PhD scholarship funded by the Chinese Scholarship Council and the University of Edinburgh.