Classical experiments in salamander regenerative biology over the last century have long established that the wound epidermis is a crucial signaling structure that forms rapidly post-amputation and is required for limb regeneration. However, methods to study its precise function at the molecular level over the last decades have been limited due to a paucity of precise functional techniques and genomic information available in salamander model systems. Excitingly, the recent plethora of sequencing technologies coupled with the release of various salamander genomes and the advent of functional genetic testing methods, including CRISPR, makes it possible to re-visit these foundational experiments at unprecedented molecular resolution. Here, I describe how to perform the classically developed full skin flap (FSF) surgery in adult axolotls in order to inhibit wound epidermis formation immediately following amputation. The wound epidermis normally forms via distal migration of epithelial cells in the skin proximal to the amputation plane to seal off the wound from the outside environment. The surgery entails immediately suturing full thickness skin (which includes both epidermal and dermal layers) over the amputation plane to hinder epithelial cell migration and contact with the underlying damaged mesenchymal tissues. Successful surgeries result in the inhibition of blastema formation and limb regeneration. By combining this surgery method with contemporary downstream molecular and functional analyses, researchers can begin to uncover the molecular underpinnings of wound epidermis function and biology during limb regeneration.

Since Lazzaro Spallanzani reported it in 17681, salamander limb regeneration has been one of the most well-studied natural regenerative phenomenon that has enamored biologists for centuries. Successful limb regeneration hinges on the formation, outgrowth, and subsequent patterning of an undifferentiated cellular structure known as the blastema. Researchers have made significant strides in understanding the cellular composition of the blastema as well as which supportive tissues and cell types are necessary for its formation2,3,4,5,6,7,8,9,10,11,12,13. Yet, the coordinated signaling mechanisms between different tissues and cell types that lead to the initiation of blastema formation remain poorly understood.

A key requirement for successful blastema formation and regeneration is the wound epidermis, a transient and specialized epithelium that covers the amputation plane within 12 hours post-amputation10. Following amputation, epithelial cells from the intact skin proximal to the injury rapidly migrate over the amputation plane to form a thin wound epithelium14. As the blastema forms in the following weeks, the early wound epidermis develops into a thicker epithelial signaling structure called the apical epithelial cap (AEC)15. While normal full thickness skin contains both an epithelial and dermal layer separated by a basal lamina, the wound epidermis/AEC consists only of an epithelial layer and lacks a basal lamina16,17. The absence of the basal lamina and dermis allows for direct contact between the wound epithelial cells and the underlying tissues, which facilitates bi-directional signaling between the two compartments that is critical for both blastema formation and maintenance17,18.

Classical experimental studies devised various innovative surgical methods to probe wound epidermis/AEC function and necessity via inhibiting its formation. These methods included suturing19 or grafting full thickness skin20,21 over the amputation plane, immediately suturing the amputated limb into the body cavity22, and continuous daily removal or irradiation of the early wound epidermis and AEC23,24. Altogether, these experiments not only established the importance of the wound epidermis/AEC, but also further determined its roles in early tissue histolysis as well as maintaining progenitor cell proliferation and blastemal outgrowth13 throughout regeneration.

However, these previous studies were largely limited to histological staining as well as tritiated thymidine pulses to track cell proliferation. In fact, revisiting these classical experiments with modern sequencing technologies and functional techniques in salamanders has only recently been done and has led to the discovery of additional roles for the wound epidermis in modulating inflammation and ECM degradation/deposition during early stages of regeneration25. With the release of various salamander genome and transcriptome sequences26,27,28,29,30,31,32,33,34, as well as the burgeoning number of functional methods available in salamander species11,35,36,37,38, researchers are now well-positioned to begin to unravel the molecular mechanisms driving wound epidermis formation, function, and AEC development.

Unfortunately, several of these classical methods used to inhibit wound epidermis formation are technically challenging, presenting difficulties for reproducibility between biological replicates in the same experiment. For instance, maintaining skin grafts can be challenging as grafts may eventually fall off the host limb and removal of the wound epidermis/AEC daily is difficult without damaging the underlying tissues. Furthermore, suturing the amputated limb into the body cavity is challenging and also requires additional injury at the site of insertion. On the other hand, suturing full thickness skin immediately over the amputation plane is relatively simple, technically reproducible, and introduces minimal tissue damage. This full skin flap (FSF) surgical method was previously developed by Anthony Mescher in 1976 in adult newts (Notophthalmus viridiscens). He demonstrated that the FSF surgery inhibited wound epidermis formation and function by prohibiting both epithelial cell migration over the amputation plane and direct contact between epithelial cells and the underlying tissues.

Here, this surgical procedure is shown step-by-step using the axolotl limb. Coupled with modern day molecular and sequencing technologies, this technique may prove to be very helpful for researchers to deepen our understanding of wound epidermis/AEC formation and function during limb regeneration.

All animal experiments were performed in accordance with IACUC (Protocol #: 11-32) and AAALAC guidelines at Harvard University.

1. Preparing solutions and setup for anesthesia and recovery

4. Assessing success of the surgery under a stereo microscope

NOTE: We recommend checking animals under a stereo microscope at least once a week to assess the integrity of the full skin flap and success of the surgery.

This surgical protocol will allow for the complete inhibition of wound epidermis formation (Figure 1) and ultimately, limb regeneration. A successful surgery results in no blastema formation in approximately 2-3 weeks depending on the size of the animal, while control regenerating limbs should form a blastema normally.

Researchers should inspect the sutured limb by naked eye every 2-3 days to make sure that the sutures have not popped out and that a blastema is not forming. If one or more of the sutures pop out, a wound epidermis can still form resulting in either a small or large blastema and an unsuccessful surgery (Figure 2). Additionally, researchers should inspect the sutured limb at least once every week under a stereomicroscope to make sure that a thin wound epidermis is not evident anywhere on the amputation surface. For comparison, researchers should also examine the control regenerating limb which should have a wound epidermis over the amputation plane and form a blastema over 2-3 weeks. The wound epidermis will appear thin and clear, while the normal skin will appear more opaque and pale pink (almost white), light yellow, or dark green in leucistic, albino, or wildtype axolotls, respectively.

If researchers wish to collect tissue prior to the blastema formation stages at 2-3 weeks, they should inspect the sutured limbs prior to sample collection to make sure the sutures remained in place and that a small wound epidermis did not form. Additionally, sectioning sagitally through the sutured limb tissue and performing histological analyses at any time point can also verify the presence of the dermis from the full skin flap encircling the entire amputation plane and the absence of a wound epidermis (Figure 3). 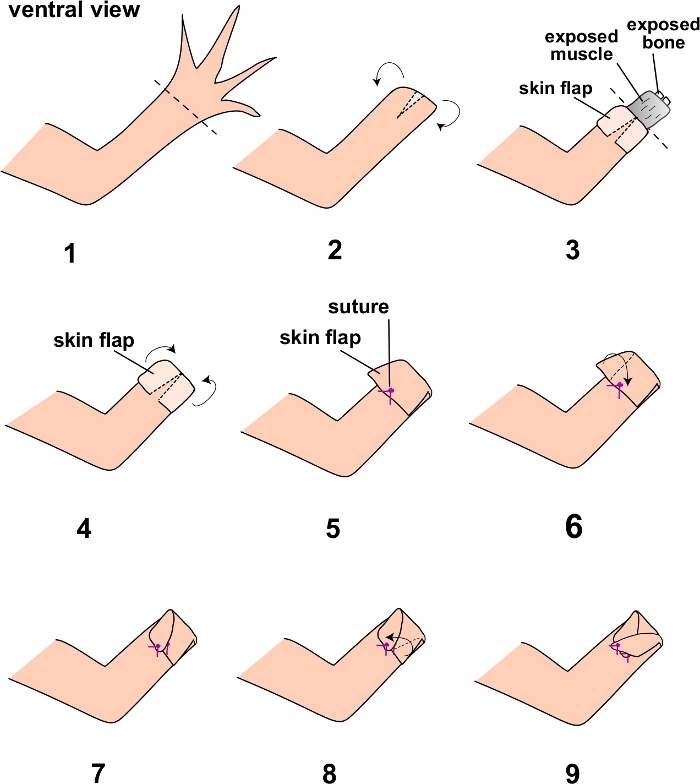 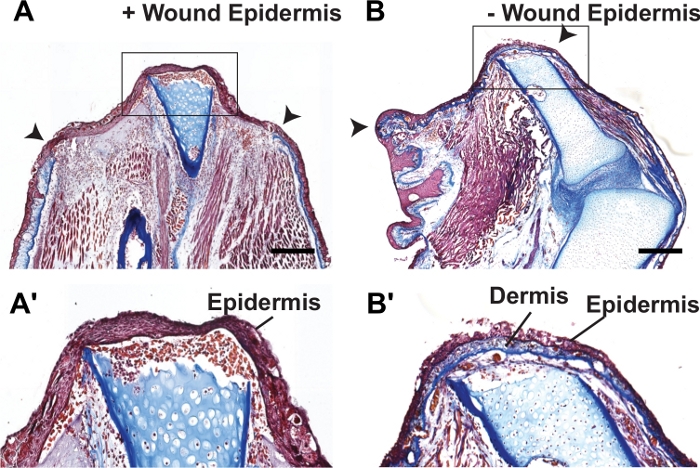 Figure 3: Histological staining of normal regenerating and FSF sutured limbs.
(A-B’) Representative brightfield images of picro-mallory stained sections from regenerating (A-A’) and sutured axolotl limbs (B-B’) at 7 dpa. Insets in A and B are shown in A’ and B’, respectively. The collagen-heavy dermal layer lines and covers the entire amputation plane in sutured limbs. Amputation plane is denoted by arrowheads in A-B. Scale bars represent 500 µm. This figure was adapted from Tsai et al.25. Please click here to view a larger version of this figure.

This article describes a protocol for performing full skin flap surgeries in axolotl limbs to inhibit wound epidermis formation. While this surgery is relatively simple and technically reproducible compared to other methods of inhibiting wound epidermis formation, there are several critical steps that can impact the success of the surgery. First, when pulling the intact full skin flap over the exposed underlying tissues, it is paramount that the full thickness skin not be damaged in any way. Damage to the skin flap can still lead to the formation of a small wound epidermis, which can result in a small blastema-like outgrowth. Second, ensure sutures do not fall out during post-operative care as this can also lead to the formation of a small wound epidermis. To this point, minimizing the potential contact between the sutured limb and any surfaces is important, especially during the first week post-surgery. Several ways to prevent this entail housing and anesthetizing the axolotl in a large enough container such that the axolotl has plenty of room to move around post-surgery.

This surgery also has several limitations. Perhaps the most notable is that the success of surgeries can only be assessed in two ways: using the dissecting scope during the first two weeks of surgery to search for an absence of a wound epidermis and/or checking whether a blastema forms within 3 weeks. While these methods are effective, they are relatively low throughput. The development of future transgenic reporter axolotls for wound epidermis-specific markers may aid in quicker screening for successful versus unsuccessful surgeries. Furthermore, this surgery is more difficult to perform on younger animals as the intact skin is more fragile. Using sub-adult or adult axolotls is thus recommended.

While this surgery was originally developed in N. viridiscens19, it has been easily adapted for axolotls25,39 and can likely be applied to other salamander species as well. In sum, applying this technique to future limb regenerative studies will empower researchers to both develop more tools to address wound epidermis biology and identify the underlying mechanisms driving its function in initiating blastema formation.

The author thanks Doug for his constant encouragement and unwavering support, as well as the members of the Melton lab for their helpful feedback and comments on the manuscript. The author would also like to thank the Harvard Office of Animal Resources (OAR) for their dedicated animal care.