Capnography is a commonly used technology designed to assess the integrity of a patient’s ventilatory status by measuring the patient’s end-tidal CO2 (ETCO2) and respiratory rate1. When used in combination with pulse oximetry, a more comprehensive assessment of respiratory function can be achieved2,3. Capnography is frequently used in the post-anesthesia care unit, in intubated or deeply sedated patients4, in the intensive care unit (ICU), and in the emergency department5. In fact, the American Society of Anesthesiologists (ASA)6,7 recommends continuous capnography during all general anesthesia procedures8 and during moderate and deep sedation, which included an estimated 106 million procedures in the United States from January 2010-December 20149,10.

The performance of nasal cannula sampling lines can be evaluated by a variety of tests such as the overall weak point and rise time. In addition, they can be tested to determine the impact of respiratory rate and the delivery of supplemental oxygen on ETCO2 readings. Although previous studies have reported ETCO2 accuracy on a limited number of sampling lines15,16,17,18,19,20,21,22,23, there are no known studies that have evaluated nasal cannula capnography sampling line performance using a combination of tests, such as identification of the overall weak point, measurement of rise time, and determination of ETCO2 accuracy.

Another critical element of sidestream capnography monitoring affected by sampling line design is rise time, defined as the time required for a measured CO2 value to increase from 10% to 90% of the final value14. The rise time is a direct indicator of the system resolution, defining how well individual breaths are separated from one another during sampling (Figure 2A). In practice, a shorter rise time is preferable to a long rise time. This is due to the potential mixing of multiple breath samples in capnography systems with long rise times, resulting in inaccurate ETCO2 measurements14. Importantly, rise time is affected by both breath flow and sampling line design, due to the friction of air moving along the tubing, the presence of filters, and the volume of dead space within the sampling line. Sampling lines with more dead space have reduced breath sample resolution, resulting in mixed breath ETCO2 waveforms, and as a result, inaccurate ETCO2 readings13,14. These poorly differentiated breath samples occur most often in patients with a rapid respiratory rate, including infants and children14,15,16.

The accuracy of ETCO2 readings has been evaluated in multiple independent studies, all of which concluded that capnography offered a reliable measure of ventilation status16,18,19,20,21,22. However, few studies have compared the accuracy of different sidestream capnography systems, and although capnography sampling lines are used with a variety of commercial capnography monitors, the accuracy of these cross-paired devices is not well-described23. Thus, determining whether alternative commercial sampling lines are compatible with capnography monitors and provide accurate data is important for healthcare providers who use this equipment to monitor patient ventilation.

3. Measure ETCO2 accuracy as a function of respiratory rate

4. Measure ETCO2 accuracy in the presence of supplemental O2 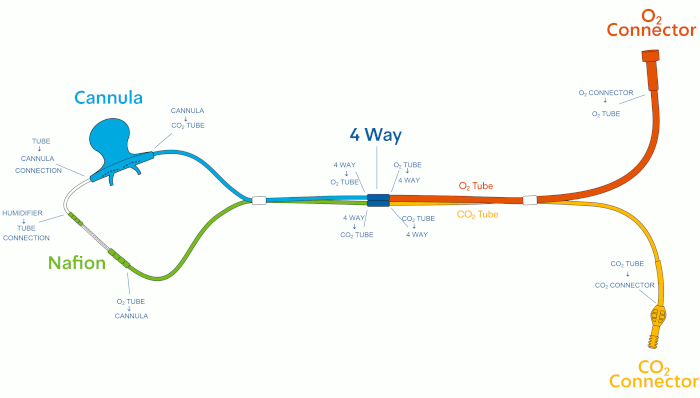 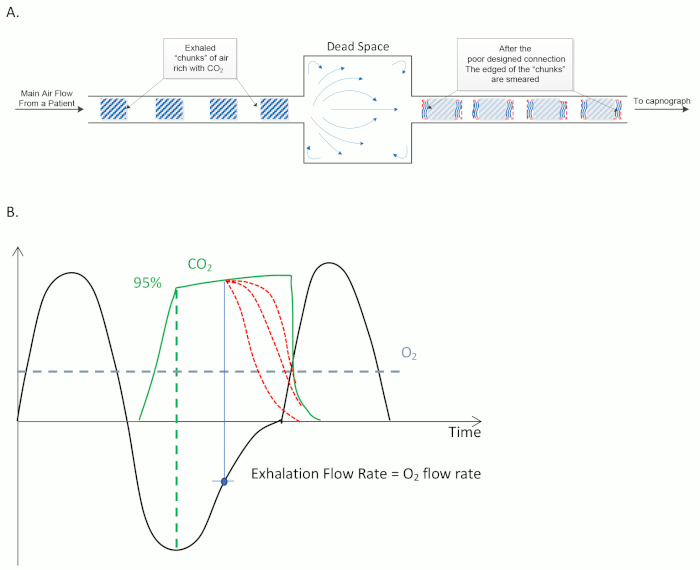 Figure 2: Fundamentals of sidestream capnography. (A) Example design of a sampling line, demonstrating how exhaled CO2 is sampled by the device. (B) Typical correlation between breathing flow rate (black line) and ETCO2 (green line) as function of time. A constant supplemental O2 flow is represented by a blue dashed line. Accurate measurement of ETCO2 occurs when CO2 has peaked (green dashed line). Inaccurate ETCO2 measurements (red dashed lines) can occur later in the breath cycle, when CO2 is diluted with supplemental O2. This occurs most often when the CO2 exhalation flow rate is equal to the flow of supplemental O2. Please click here to view a larger version of this figure. 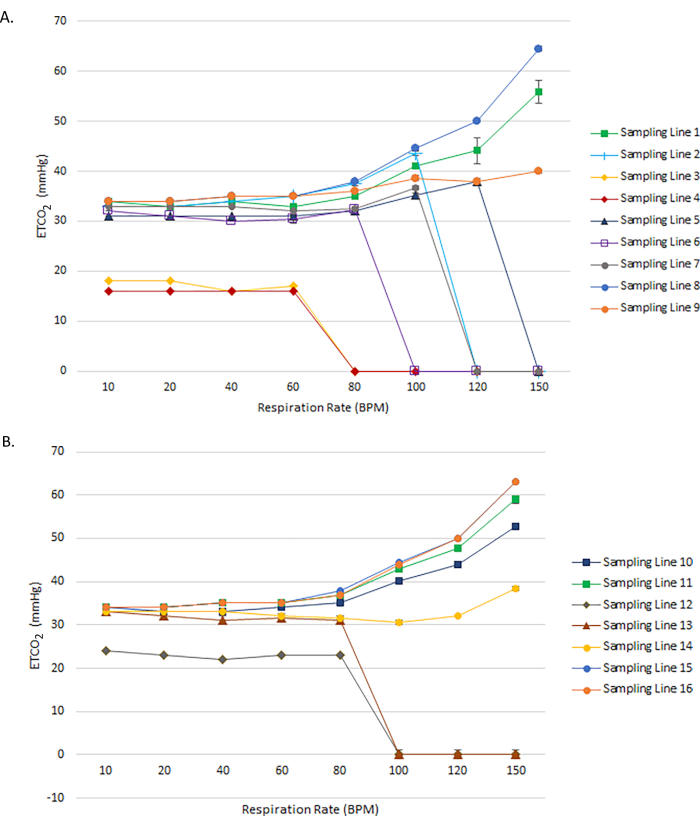 Figure 3: ETCO2 accuracy of adult and pediatric capnography sampling lines as a function of respiration rate. Measured ETCO2 values for (A) Adult and (B) Pediatric and Neonatal capnography sampling lines across a range of respiratory rates from 10 to 150 BPM. In all cases, the expected ETCO2 value is 34 mmHg. Please click here to view a larger version of this figure. 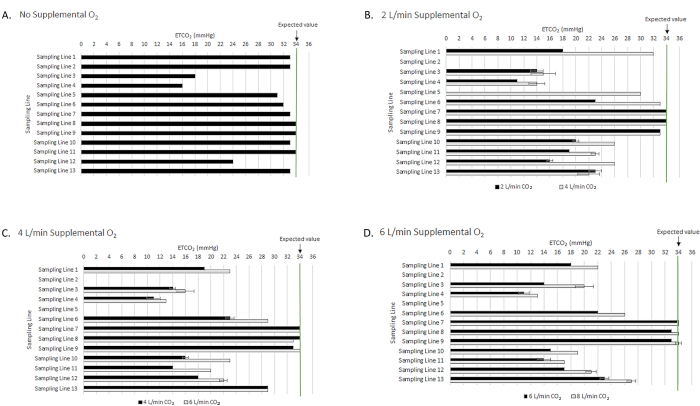 Ruben D. Restrepo is a consultant for Medtronic, and Ido Karpenkop and Katherine E. Liu are employees of Medtronic.