One of the major issues facing current cardiac stem cell therapies for preventing postinfarct heart failure is the low retention and survival rates of transplanted cells within the injured myocardium, limiting their therapeutic efficacy. Recently, the use of scaffolding biomaterials has gained attention for improving and maximizing stem cell therapy. The objective of this protocol is to introduce a simple and straightforward technique to transplant bone marrow-derived mesenchymal stem cells (MSCs) using injectable hydroxyphenyl propionic acid (GH) hydrogels; the hydrogels are favorable as a cell delivery platform for cardiac tissue engineering applications due to their ability to be cross-linked in situ and high biocompatibility. We present a simple method to fabricate MSC-loading GH hydrogels (MSC/hydrogels) and evaluate their survival and proliferation in three-dimensional (3D) in vitro culture. In addition, we demonstrate a technique for intramyocardial transplantation of MSC/hydrogels in mice, describing a surgical procedure to induce myocardial infarction (MI) via left anterior descending (LAD) coronary artery ligation and subsequent MSC/hydrogels transplantation.

Cardiac stem cell therapy has emerged as a potential approach for myocardial repair and regeneration1,2. Despite the recent positive results in animal models and clinical trials, the application of stem cell-based therapy for myocardial repair is limited due to low retention and poor survival of injected cells at the infarcted heart tissues3,4. As a result, the use of cell-based tissue engineering, including injectable biomaterials5, cardiac patches6, and cell sheets7, has been intensively studied to improve cell retention and integration within the host myocardium.

Among the various potential approaches to bioengineered cardiac tissue repair, injectable hydrogels combined with appropriate cell types, such as mesenchymal stem cells (MSCs), embryonic stem cells (ESCs), and induced pluripotent stem cells (iPSCs), are an attractive option to effectively deliver cells into myocardial regions8,9. Gelatin, a well-known natural polymer, can be used as an injectable matrix due to its great biocompatibility, considerable biodegradability, and reduced immunogenicity when compared with a wide range of biomaterials used in biomedical applications. Although gelatin-based injectable platforms have great potential, their applicability in vivo remains limited based on their low mechanical stiffness and easy degradability in the physiological environment.

To overcome these limitations, a novel and simple design of gelatin-based hydrogels consisting of hydroxyphenyl propionic acid has been proposed for in vivo applications. Gelatin-hydroxyphenyl propionic acid (GH) conjugates can be cross-linked in situ in the presence of an enzyme, horseradish peroxidase (HRP), and subsequently encapsulate various drugs, biomolecules, or cells within the hydrogel, suggesting great potential in tissue engineering applications10,11,12,13,14. In addition, we have recently investigated the therapeutic effects of GH hydrogels containing encapsulated MSCs and demonstrated their use in successful cardiac repair and regeneration after MI in a murine model15. In this protocol, we describe a simple technique for the encapsulation and in vitro three-dimensional (3D) proliferation of MSCs within GH hydrogels. We also introduce a surgical procedure designed to generate a murine MI model via coronary artery ligation and intramyocardial transplantation of MSC-loading GH hydrogels into the infarcted heart.

2. In situ MSC-loading and three-dimensional in vitro culture

3. Confirmation of in vitro proliferation and survival of MSCs within GH hydrogels

4. Induction of myocardial infarction in mice

To effectively deliver MSCs to the infarcted myocardium, MSC-loading in situ cross-linkable hydrogels described in Figure 1 were used in this protocol. Prior to in vivo transplantation, the proliferation and survival of MSCs in GH hydrogels were confirmed by a 3D in vitro live/dead cell staining assay (live: green; dead: red). As shown in Figure 2, representative images exhibited sufficient MSCs proliferation, showing branched networks within GH hydrogels. In addition, an extensive multicellular 3D structure of MSCs was clearly observed at day 14, indicating that GH hydrogels could provide a proper microenvironment for the encapsulated cells.

After the induction of MI via LAD ligation, MSC-loading GH hydrogels were intramyocardially transplanted into peri-infarct areas (Figure 3A). As shown in Figure 3B, the MSCs and gel were appropriately sustained within the infarcted region. MSCs, stained with PHK26 (red), were well integrated into GH hydrogels, stained with FITC (green), presenting successful engraftment and retention in the infarcted hearts for in vivo application.

To verify the therapeutic effects of MSC-loading GH hydrogels in a murine MI model, the changes in cardiac function and structure were evaluated by echocardiography and histological analysis at day 28 post-transplantation and compared among the different treatment groups. The representative echocardiography showed improved cardiac functions, including FS, EF, and ESV, in the MSC/gel treated group compared with the other groups (Figure 4). In addition, histological analysis exhibited less fibrosis, thicker infarcted walls, and a smaller infarct size in the MSC/gel treated group than in the other groups, indicating that this protocol contributed beneficial effects by significantly attenuating LV remodeling (Figure 5). 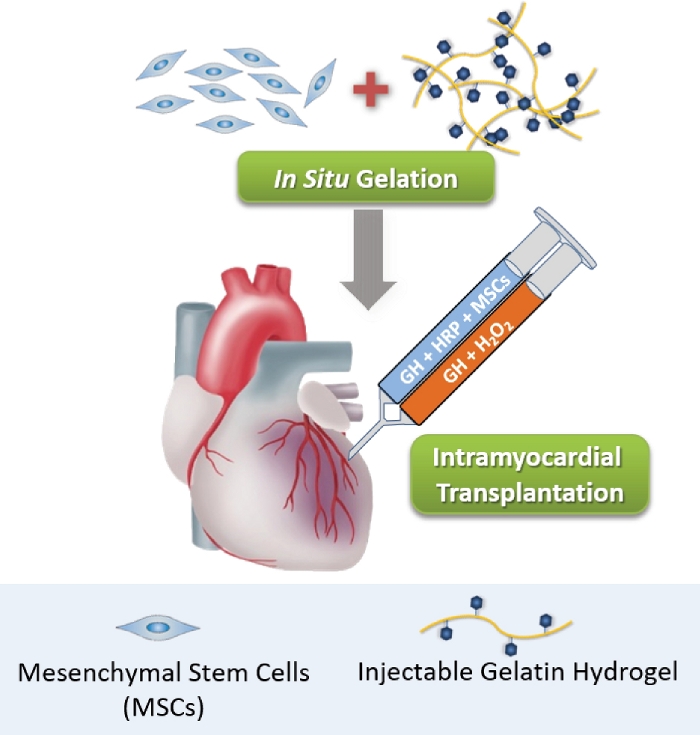 Figure 1: Scheme of the process for improving stem cell retention and engraftment using injectable hydrogels. In situ cross-linkable GH hydrogels containing bone marrow-derived MSCs were prepared and transplanted by intramyocardial injection into the infarcted heart. Please click here to view a larger version of this figure.

Figure 3: In vivo transplantation of MSC/Hydrogels. (A) A schematic diagram showing intramyocardial transplantation after the induction of MI. (B) Representative images of transplanted MSCs and GH hydrogels labeled with PKH26 (red) and FITC (green), respectively. Mice were sacrificed after 1, 3, 5, or 7 days of transplantation and their hearts were then excised to assess the degree of MSC and GH hydrogel engraftment. The excised hearts were cryo-fixed, prepared into serial-sections, and imaged via a confocal microcopy (200x magnification; scale = 100 µm). The images were partly adapted with permission from Kim et al.15. Please click here to view a larger version of this figure. 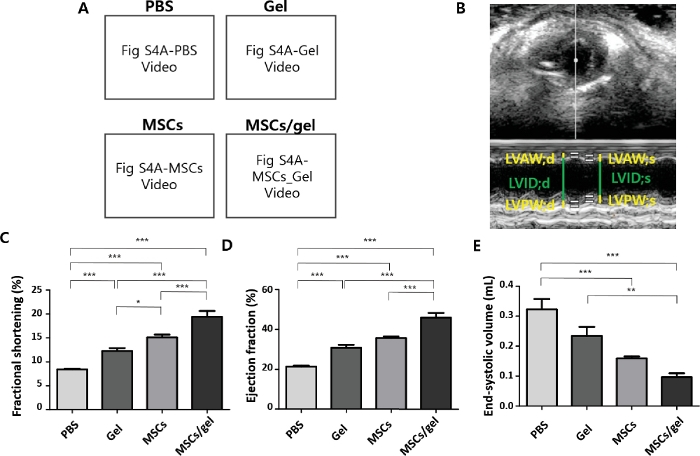 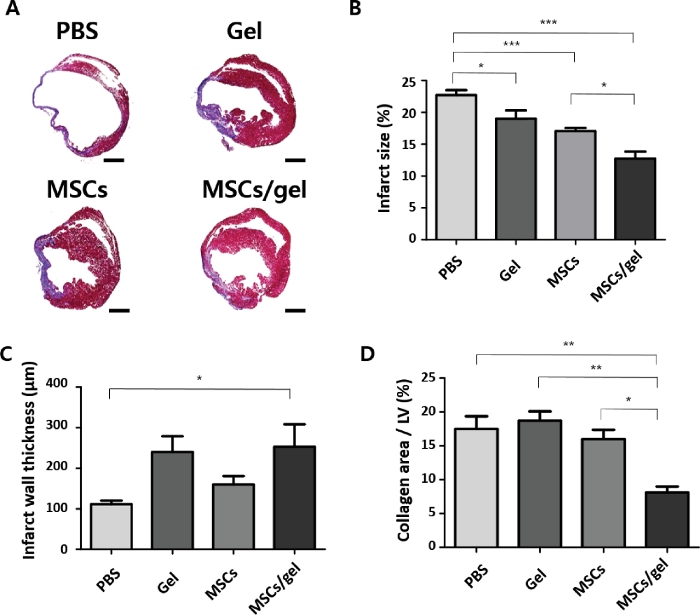 Injectable GH hydrogels have great potential for in vivo applications because of their ability to homogenously incorporate diverse therapeutic agents in situ. Furthermore, their physical and biochemical properties can be easily manipulated based on disease-dependent requirements. In this respect, injectable hydrogels have been proposed to address the major limitations in current cardiac stem cell therapy hampered by poor survival and cell retention (i.e., < 10% within 24 h post-transplantation) in the injured heart19,20. To overcome this poor outcome, the protocol described herein provides a simple and feasible method to improve cell retention and survival using GH hydrogels that can be cross-linked in situ after myocardial transplantation, which have demonstrated favorable effects on cardiac structure and function in a murine MI model.

The primary advantage feature of this technique is its broad in vivo applicability with any type of cell and biomolecule, which can be loaded by simply mixing with the pregel GH solution prior to injection. Furthermore, to obtain a comprehensive understanding of donor-to-host interactions, a straightforward labeling approach of the GH conjugates and/or encapsulated biomolecules can be adapted to track changes in their in vivo stability, host integration, and resorption kinetics. To our knowledge, the use of injectable gelatin-based hydrogels combined with therapeutic stem cells was the first to validate the restorative potential of cardiac tissue in vitro and in vivo15.

At the current stage in this research, GH hydrogels that are loaded with MSCs, injected, and cross-linked in situ were used as a proof of concept to assess their applicability in a murine MI model. Although this method seemingly improved MSC engraftment and retention in the transplanted heart tissues, the detailed conditions during injection should be considered for optimizing therapeutic efficacy, such as the location of injection site (i.e., peri-infarct zone or infarct zone), volume and number of injections, and stiffness of the hydrogel (i.e., hard to inject or easy to leak).

In conclusion, we have demonstrated a protocol for a representative murine MI model by LAD ligation and a practical method for intramyocardial transplantation of stem cells using in situ cross-linked hydrogels to improve the retention and engraftment of transplanted MSCs. These techniques provide an effective method for intramyocardial transplantation of MSC-loading injectable hydrogels and highlight their great potential for application in large animals and clinical translation.

The authors have no conflicts of interest to declare with this work.