Close to 14% of adults in the United States were reported to smoke cigarettes in 2018. The effects of cigarette smoke (CS) on lungs and cardiovascular diseases have been widely studied, however, the impact of CS in other tissues and organs such as blood and bone marrow remain incompletely defined. Finding the appropriate system to study the effects of CS in rodents can be prohibitively expensive and require the purchase of commercially available systems. Thus, we set out to build an affordable, reliable, and versatile system to study the pathologic effects of CS in mice. This whole-body inhalation exposure system (WBIS) set-up mimics the breathing and puffing of cigarettes by alternating exposure to CS and clean air. Here we show that this do-it-yourself (DIY) system induces airway inflammation and lung emphysema in mice after 4-months of cigarette smoke exposure. The effects of whole-body inhalation (WBI) of CS on hematopoietic stem and progenitor cells (HSPCs) in the bone marrow using this apparatus are also shown.

Cigarette smoking remains one of the major causes of preventable diseases in the US despite the steady decline in the number of cigarette-smoking adults in the past 50–60 years1. It is widely known that smoking is linked to multiple diseases of the lungs and blood including chronic obstructive pulmonary disease (COPD), a group of diseases that includes emphysema and chronic bronchitis2,3,4. According to the Center for Disease Control (CDC), in 2014, COPD was the third leading cause of death in the United States with over 15 million Americans suffering from this disease5.

CS has also recently been associated with a higher risk of developing clonal hematopoiesis (CH)6,7, a condition in which a single hematopoietic stem cell disproportionately produces a large percentage of a person’s peripheral blood. This finding indicates a potential connection between smoking and bone marrow function. Given the widespread and highly significant health implications of CS and given that murine models of diseases are a cornerstone of progress in biomedical research, it is useful to develop efficient and affordable systems to model CS in mice.

Here, we provide a step-by-step guide for building an affordable system for treating and studying the in vivo effects of CS on lung emphysema and bone marrow homeostasis. The assembly of this equipment does not require the user to have specialized knowledge and thus allows for DIY assembly.

All the animals involved in the experiments and the development of this technique have been under our animal use protocol approved by the Institutional Animal Care and Use Committee (IACUC) and under Baylor College of Medicine and MD Anderson institutions that are accredited by the Association for Assessment and Accreditation of Laboratory Animal Care (AAALAC). 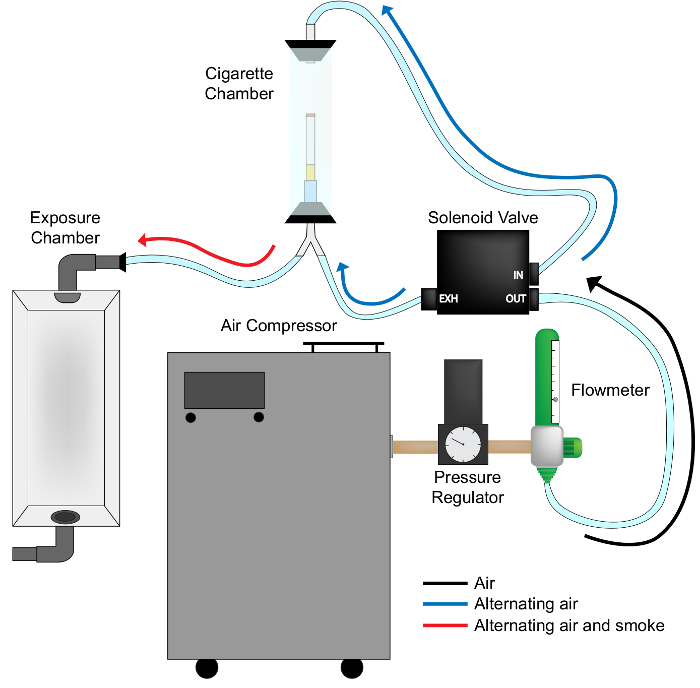 Figure 1: Schematic of the connections of our WBIS for exposure to CS. This figure demonstrates how all components are assembled to form a working apparatus. The figure shows only one assembled smoking chamber of the four that the machine is capable of operating. Please click here to view a larger version of this figure.

One of the main hallmarks of CS exposure is emphysema that is characterized by the damage and destruction of air sacs (alveoli) in the lung. Thus, initial experiments focused on the DIY system’s ability to provoke emphysematous changes in the lungs of female mice upon repeated whole-body exposure to CS. The CS dosing regimen was chosen based on our prior publications in which we utilized the DIY system described here to treat mice with CS and study the molecular pathophysiology of emphysema10,11,12,13,14,15,16. Specifically, mice were exposed whole-body to the smoke of four commercial cigarettes with filter daily, with smoke-free intervals of 10 min in between each cigarette, five days a week for a duration of 4 months10,11,12,13,14,15,16.

Hematoxylin and eosin (H&E)-stained lung histology showed the destruction of the alveoli in mice exposed to CS in comparison to Air treated mice (Figure 2A). In agreement, histomorphometric analysis of lung sections in a blinded fashion showed that the mean linear intercept (MLI) was significantly higher in mice exposed to CS as compared to Air controls (Figure 2B). As expected, WBIS to CS provokes a drop in body weight (Figure 2C). Consistent with the above observations CS-exposed mice also showed enhanced airway infiltration of immune cells as well as induction of Matrix metalloproteases 9 and 12 (Mmp9 and Mmp12) gene expression, which are responsible for tissue damage (Figure 2D,E)17. Cotinine, a metabolite of nicotine and a biomarker for CS exposure, was detected to be significantly elevated in the serum of mice exposed to 4 months of CS but was undetectable in Air-exposed mice (Figure 2F).

There is an increasing appreciation of the multifaceted impact of CS exposure on the body’s cells and tissues. A prior study showed that WBI exposure of mice to CS with a regimen of 6 h/day, 5 days/week for 9 months with 3R4F cigarettes led to an alteration in the hematopoietic stem cell niche18. Therefore, we tested the ability of this DIY system to alter bone marrow homeostasis utilizing our pre-established CS dosing regimen10,11,12,13,14,15,16. After exposure, we analyzed BM populations using flow cytometry (Figure 3A). In accordance with the expectations, treatment of mice with CS on this DIY system resulted in an alteration in bone marrow (BM) populations. Specifically, flow cytometric analysis showed a significant increase in hematopoietic stem and progenitor (HSPC) populations after 4 months of CS exposure as compared to Air controls (Figure 3B). Extending these observations, whole-body exposure to CS of mice utilizing a commercially available system (see Table of Materials) also showed an alteration in HSPC populations (Figure 3C). The dosing regimen and duration of CS exposure used in the commercial system and the prior publication on CS and hematopoiesis18 were quite different than this DIY system suggesting that bone marrow homeostasis is exquisitely sensitive to a wide range of CS dosing and treatment regimens (Figure 3C). Overall, this data highlights that this DIY system is an affordable option that can be used to expose mice to CS under controlled conditions to reliably study its effects in a range of cells and tissues. 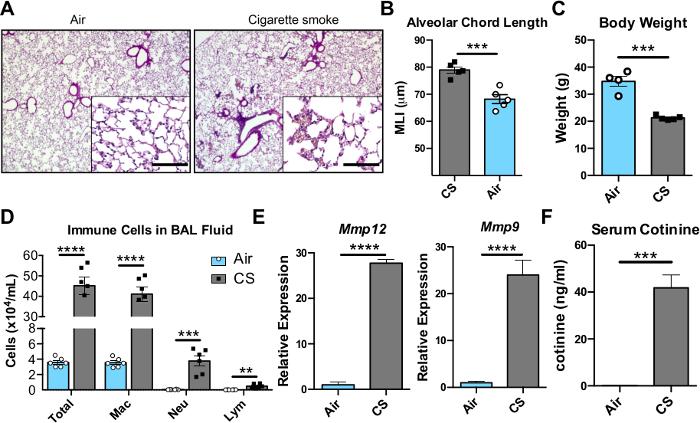 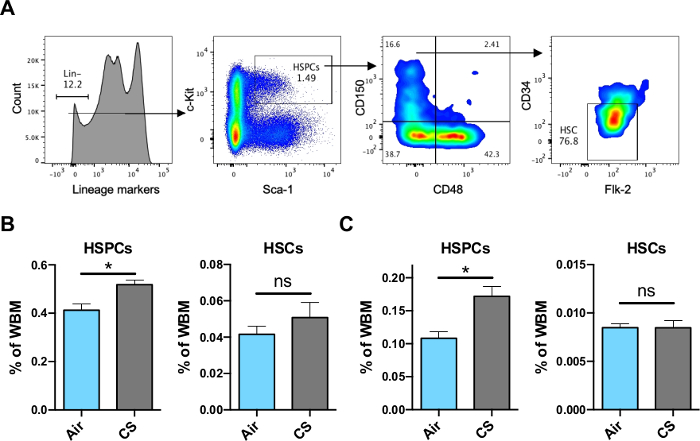 Here we provide the information required for the construction of an apparatus for WBIS of mice to CS. After installation of the system, it is critically important that investigators calibrate the system based on the delivered dose of nicotine or cotinine in animals. The apparatus contains a timer and pressure gauges that can be used to adjust cigarette puff volume, puff frequency, combined smoke exposure period, and rest intervals that animals receive between each cigarette. Furthermore, the actual number of cigarettes administered daily may vary depending on tar and nicotine content. Finally, it is imperative that any component exposed to cigarette smoke be cleaned on a regular basis to ensure proper smoke circulation and consistent smoke exposure of the animals.

There are at least half a dozen commercial systems and protocols available for the treatment of mice with CS and air toxicants. However, the majority of equipment used for this purpose require commercial vendors or in-depth knowledge of electronics and/or electrical engineering for assembly. Some of those systems employ WBI regimens while others incorporate nose-only treatments, but these systems can cost up to $100,000 making them prohibitively expensive for most laboratories.

The advantage of this DIY system is the inherent simplicity in the manufacture, low cost (~$6,000), and versatility. Furthermore, the components necessary for the construction of this DIY apparatus are readily available from commercial retailers and supply chains. We acknowledge a limitation of the exposure protocol and equipment is the lack of dosimetry equipment to measure cigarette smoke constituents delivered into the mouse exposure chambers. However, the design of this system works in a controlled fashion and we showed that the levels of serum cotinine in this chosen smoking regimen are comparable to other murine models of CS-induced emphysema20,21. Furthermore, this method has been shown to have applications beyond monitoring the effects of CS in the lungs and BM. Our group used this system to study how cigarette smoke affects the intestinal tissue15. We have also recently adapted this system to study the deleterious effects of exposure to electronic cigarettes on the lungs22.

In summary, this apparatus represents an affordable and easy-to-build exposure system to study the vast array of detrimental effects of cigarette smoking.

AR, XH, and PE were supported by NIH grant R01HL140398 and a Gilson Longenbaugh Foundation grant. DEMM and KK were supported by the NIH grants R01HL136333 and R01HL134880 (KYK), and a grant from the Helis Medical Research Foundation. DEMM is also supported by the Howard Hughes Medical Institute (HHMI) Gilliam Fellowship for Advanced Study. PE is also supported by Training in Precision Environmental Health Sciences NIEHS T32 ES027801 Fellowship Program. JC and MF are supported by Tobacco Research Funds from the Department of Epigenetics and Molecular Carcinogenesis and by the Center for Epigenetics (Scholar Award to MF) at MD Anderson. FK and YZ are supported by NIH grants R01 ES029442-01 and R01 AI135803-01 as well as VA Merit grant CX000104. This project was supported by the Cytometry and Cell Sorting Core at Baylor College of Medicine with funding from the CPRIT Core Facility Support Award (CPRIT-RP180672), the NIH (CA125123 and RR024574), and the assistance of Joel M. Sederstrom.