We describe a clinical algorithm, based on decades of front-line experience of diagnosis and surgical treatment of human Brucellar spondylodiscitis in the largest medical center of the China's Xinjiang Pastoral Area.

Brucellar spondylodiscitis (BS) is the most prevalent and significant osteoarticular presentation of human Brucellosis, which is commonly manifested in pastoral communities. It is difficult to differentially diagnose and usually leads to irreversible neurologic deficits and spinal deformities. The initial diagnosis of BS is based on clinical findings and radiographic assessments, and the confirmed diagnosis should be established by the isolation of Brucella species from the blood and/or the standard tube agglutination test. Differential diagnosis of multifocal BS from either degenerative disc diseases or tuberculosis is especially highlighted. The surgical approach, either endoscopic or open, is demonstrated in detail, accompanied by radiographic evidence of structural compression or severe instability. Further, the crucial surgical steps, including single-stage transforaminal decompression, debridement, interbody fusion, and internal fixation, are explained. Moreover, perioperative care and postoperative rehabilitation are also addressed. Taken together, this clinical algorithm presents a practical guide that has yielded substantially satisfactory outcomes in the past decades, which can also be introduced for large-scale application to manage human BS, especially in endemic regions.

With more than half a million new cases annually, human Brucellosis has become a public health concern and remains an enormous burden worldwide1,2,3,4. BS, as the most common and severe osteoarticular manifestation of human Brucellosis, involves multiple structures including vertebral bodies, intervertebral disc, and paraspinal structures5,6. It occurs frequently in the lumbosacral zone and needs to be differentiated from other infectious diseases because of its nonspecific clinical characteristics7,8. Despite the significant advances in research over the past decades, accurate and timely diagnosis of BS is still a challenge for clinicians due to its late-onset radiological findings, slow growth rate in blood cultures, and the complexity of its serodiagnosis9. Therefore, human BS remains clinically underdiagnosed and underreported. Although the past decades have seen increasingly rapid advances in the introduction and popularization of several therapeutic guidelines, there is still no consensus for an optimal management modality10. Frequent relapses, treatment failure, and sequelae are reported constantly11.

Of note, BS can be severely debilitating and disabling even if it is rarely fatal. If it is not treated appropriately, possible serious sequelae might be induced including persistent back pain, neurological deficiency, and even kyphotic deformity12,13. Antibiotic therapy is the core in the treatment of BS and yields generally promising outcomes9. However, certain patients may require surgical treatment if neurological dysfunction, spinal instability, abscess formation, intractable pain, or a previous unsatisfactory response to conservative treatments are observed. Surgical intervention remains controversial. Different surgical procedures for debridement and fusion have been described for infectious diseases of the lumbar spine including anterior-only, posterior-only, and combined approaches14,15,16. Here, diagnostic guidelines have been presented for human BS and for the single-stage surgical treatment with transforaminal decompression, debridement, interbody fusion, and internal fixation via a posterior-only approach. A detailed protocol of this method is given below.

The study was approved by the ethical committee of the First Affiliated Hospital of Xinjiang Medical University, China17.

This paper describes a prospective, non-randomized, controlled study of 32 consecutive BS patients who were treated by a single-stage transforaminal decompression, debridement, interbody fusion, and internal fixation via a posterior-only approach in the Department of Spine Surgery, First Affiliated Hospital of Xinjiang Medical University, Urumqi, China. Figure 1 shows a typical case in this study.

The clinical symptoms are summarized in Table 2. Patients generally complained of chronic back pain with signs of neurological impairment. Brucella agglutination level was ≥1/160 in all patients; positive blood culture results were observed in 8 cases (25%). According to the aforementioned diagnostic criteria, all patients were indicated as candidates for a single-stage surgical treatment. The mean duration of surgery was 133.1 ± 36.6 min, and the mean blood loss was 378.1 ± 187.9 ml (range 120-800 mL). Histopathologic examinations on biopsy samples obtained from the paravertebral tissue indicated noncaseating granulomatous lesions infiltrated by inflammatory cells (lymphocyte and monocytes) with various spatial extents (Figure 2). Patients were followed up for over 12 months (24.9 ± 8.2 months). Postoperative complications, including superficial wound infection, was seen in 1 patient at postoperative day 10 and treated successfully with intravenous antibiotics. Deep wound infection and sinus formation were perceived in 2 patients with a history of diabetes and treated by a revision surgery and extended intravenous antibiotics. No clinical or radiological relapses were observed throughout the entire follow-up phase.

The interbody fusion rate was 93.8% at 12 months postoperatively according to the Bridwell criteria. Grade I and II fusion was seen in 30 (93.75%) and 2 patients (6.25%), respectively. These two patients with grade II fusion were evaluated with lateral flexion/extension radiography and CT examinations; no noticeable movement or gap was detected within the interbody area. 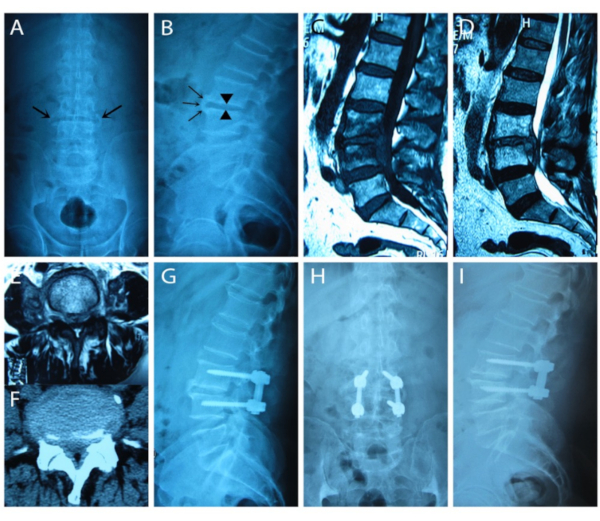 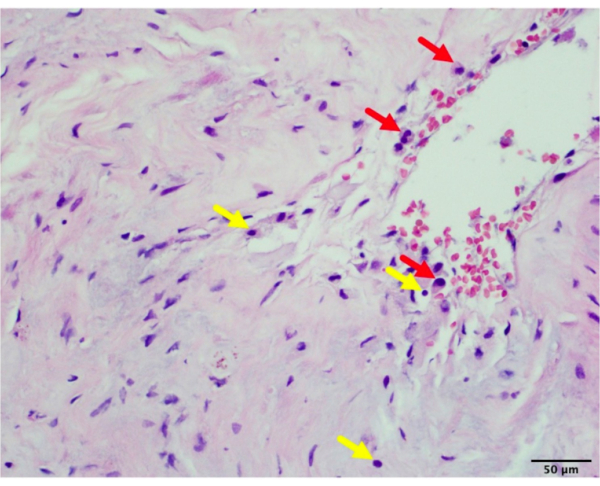 The present guideline of diagnosis and surgical treatment of human BS with a detailed protocol and satisfactory clinical evidence from representative cohorts shows clinical efficacy and is proposed for large-scale application to manage human BS, especially in endemic regions. The first critical step in the treatment of BS is to make the correct diagnosis. The diagnosis of BS needs to be differentiated from spinal tuberculosis compared to which BS is relatively less bone-destructive and usually responds effectively to antibiotic treatment38. In addition, noticeable neurological deficits, persistent pain, spinal instability, and paravertebral abscesses can be observed in BS patients in the later stages. Surgical treatment should be considered as the last resort for patients who do not respond well to antibiotic therapy39.

Surgical outcomes of BS are rarely elucidated in the literature, and the role of surgery treatment remains controversial. BS typically occurs in the lumbosacral region, particularly at the L4-L5 and L5-S1 levels8,20,40. Surgical debridement, decompression, and fusion via multiple approaches have been proposed14,16,41. As the gold standard, the anterior-only approach ensures a direct access with adequate exposure to the spinal lesion. However, anterior instrumentation at L4-L5 and L5-S1 is potentially dangerous and insubstantial due to the complicated regional anatomy16,41,42. Furthermore, most patients displayed bilateral nerve root compression, epidural abscess formation, and spinal stenosis. Therefore, it may not be possible to achieve complete decompression of the contralateral nerve root via the anterior approach.

The second critical step is to utilize transforaminal lumbar interbody fusion (TLIF) technology during surgery in the form of a modification of posterior lumbar interbody fusion. This can minimize traction force on the dura and nerve root during surgery and therefore, decrease the risk of postoperative complications43. Posterior-only approaches are reported increasingly as alternative surgical therapy for selective spinal tuberculosis41. Single-stage transforaminal decompression, debridement, interbody fusion, and internal fixation via posterior-only approach is generally reported in the treatment of spinal tuberculosis. However, obtaining adequate debridement and reconstruction of anterior column defects has been considered insufficient. Furthermore, this strategy is also considered unsuitable for patients with severe vertebral collapse and apparent paravertebral abscess formation44,45.

Unlike spinal tuberculosis, destruction in BS occurs mainly around and within the intervertebral disc, and vertebral collapse and local kyphosis are less likely to occur. Therefore, debridement and intervertebral bone graft fusion via a posterior approach is an effective and safe procedure for BS46. Brucellosis can affect the facets, which may be the reason for severe back pain in these patients. Accordingly, a facetectomy followed by intervertebral debridement and fusion may be more effective than traditional posterior approaches. In this study, no intraoperative complications were observed, and chronic back pain and radiating pain were relieved significantly in the present cohorts after surgery. Besides, no recurrence was reported during the follow-up period. Therefore, this single-stage surgical intervention with transforaminal decompression, debridement, interbody fusion, and internal fixation via the posterior-only approach is clinically effective for surgical candidates of human BS.

The third critical step is to plant the pedicle screw into the affected vertebra to achieve a shorter segmental fixation. The BS lesion mainly involves the structures within the intervertebral space and causes less bony destruction compared to other infectious diseases that occur in the same region. Therefore, the posterior approach has been suggested to be more convenient and minimally invasive during the process to access the involved structures, allowing for a possibly thorough removal of the lesion and complete decompression of bilateral nerve roots. Posterior bone graft implantation can also be straightforwardly performed via the far-lateral portion of vertebral foramen. As BS-related destruction of vertebral body is commonly not severe, the transpedicular screws can still be implanted in the affected vertebra with a minimal surgical exposure and shorter segmental fixation47. In conclusion, application of the aforementioned protocol for timely diagnosis and treatment of BS patients can achieve satisfactory short-term clinical outcomes. Further popularization of this single-stage surgery on a large-scale for surgical candidates, especially in endemic regions, might be helpful to reduce its global burden.

Dr. Xiaoyu Cai acknowledges the financial support from the China Scholarship Council. This work was funded by the Natural Science Foundation of Xinjiang Province, P. R. China (no. 2016B03047-3). 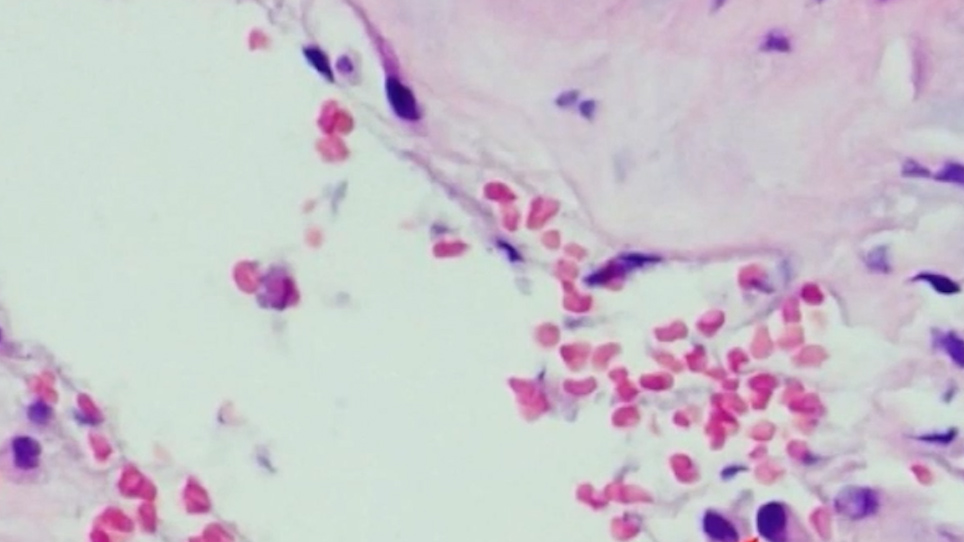