Ischemia-reperfusion injury (IRI) is the leading cause of acute renal failure and is a significant contributor to delayed graft function. Animal models are the only available resources that mimic the complexities of the IRI-associated damage encountered in vivo. This paper describes an effective mouse model of unilateral renal IRI that delivers highly reproducible data. Ischemia is induced by occluding the right renal pedicle for 30 min followed by reperfusion. In addition to the surgical procedure, a sequential overview of the expected physiological and histopathological changes following renal IRI will be provided by comparing data from seven different reperfusion times (4 h, 8 h, 16 h, 1 day, 2 days, 4 days, and 7 days). Critical data for planning experiments ahead, such as mean surgical time, average anesthetic consumption, and body weight changes over time, will be shared. This work will help researchers implement a reliable renal IRI model and select the appropriate reperfusion time that aligns with their intended investigative goals.

The kidneys are among the highest perfused organs in the body and are extremely susceptible to changes in blood perfusion1. Renal ischemia-reperfusion injury (IRI) remains the leading cause of acute renal failure2,3 and is associated with high morbidity and high mortality in hospitalized patients4. With limited therapeutic options available,4,5 renal IRI is currently the focus of several research efforts in biomedicine6,7 aiming for the development of novel therapeutic targets and the characterization of early and sensitive markers of renal injury8,9,10. Identifying a reliable, time and cost-effective animal model is considered essential to meet these needs. This paper presents a simple and effective mouse model of unilateral renal IRI. Ischemia is induced by clamping of the right renal pedicle for 30 min11,12. A crucial part of this model is choosing the most suitable reperfusion time that will reproduce the pathological events of interest, such as tubular necrosis, polymorphonuclear inflammatory cell infiltration, or fibrosis. Therefore, researchers are provided with this sequential overview of representative pathological changes expected in the IRI kidney.

The following protocol describes a survival surgery. Therefore, the highest aseptic and surgical practice is applied. All animal experiments were performed in compliance with institutional guidelines and approved by the Institutional Animal Care and Use Committee. To eliminate gender and strain-based differences in IRI effects, only male C57BL6 mice were used in the study. All animals were matched in age and weight to produce comparable results.

NOTE: A timeline of the different experimental phases and interventions is shown in Figure 1A.

Physiological parameters
Mice recovered from this unilateral renal IRI surgery uneventfully; appeared active and alert; and showed normal eating, drinking, and behavior by the following day. Some mice may have post-IRI body weight loss, although it is usually less than 10% of the initial body weight (Figure 2). Greater body weight losses (˃10%) can be detrimental, and those animals should be removed from the study. Sham-operated mice did not show body weight changes post-surgery (measured 24 h after surgery). Most mice recovered their initial body weight between days 4 and 7 post-surgery (see IRI 7-day group, Figure 2). Renal function can be assessed using traditional markers such as blood urea nitrogen (BUN) and creatinine. Additionally, electrolyte levels in serum (sodium, potassium, and chloride) and an automated differential blood count were included in the analysis.

Histopathological changes
Assessment of histopathological findings was done using 4% paraformaldehyde-fixed, paraffin-embedded whole mid-sagittal sections of the kidney stained with hematoxylin/eosin (HE), periodic acid Schiff, and Masson's trichrome stains. The most evident changes produced by this unilateral renal IRI model can be seen at the cortico-medullary junction, specifically in the proximal tubules, thick ascending limbs of Henle's loop, and distal convoluted tubules, as well as in the tubular interstitium (see the legend for Figure 3). Microscopic images showing the most characteristic lesions following IRI in the kidney can be seen in Figure 3. A list of the sequential histopathological findings is provided in Table 1.

A tubular injury scoring system was developed to categorize the damage over time (Figure 4). In this, five defined alterations were assessed by three different evaluators: 1) tubular epithelial attenuation; 2) brush border loss; 3) tubular necrosis; 4) luminal obstruction; and 5) presence of proteinaceous cast. An assignment of "1" indicates that the alteration is present, "0" that it is absent.

Figure 1: Experimental renal IRI model in mouse. (A) Phases of experiments and interventions (anesthesia induction, ischemia, and reperfusion) are shown. Please note the changes in the color of the right kidney to dark red during ischemia (B) to pink during reperfusion (C). (D) Macroscopic appearance of the IRI right kidney (red arrow) compared to the contralateral non-IRI kidney of the same animal 24 h after surgery. Red arrow in (B) shows the position of the hemostatic clamp. Abbreviation: IRI = Ischemia-reperfusion injury. Please click here to view a larger version of this figure. 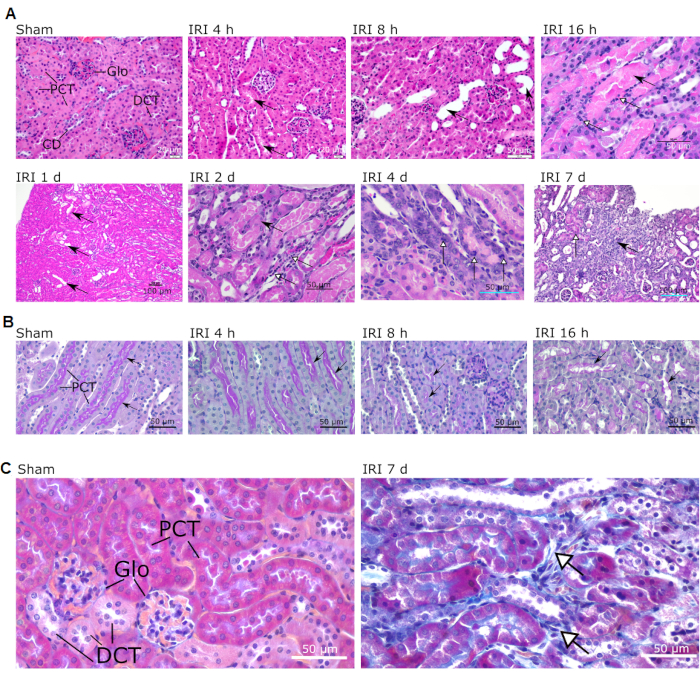 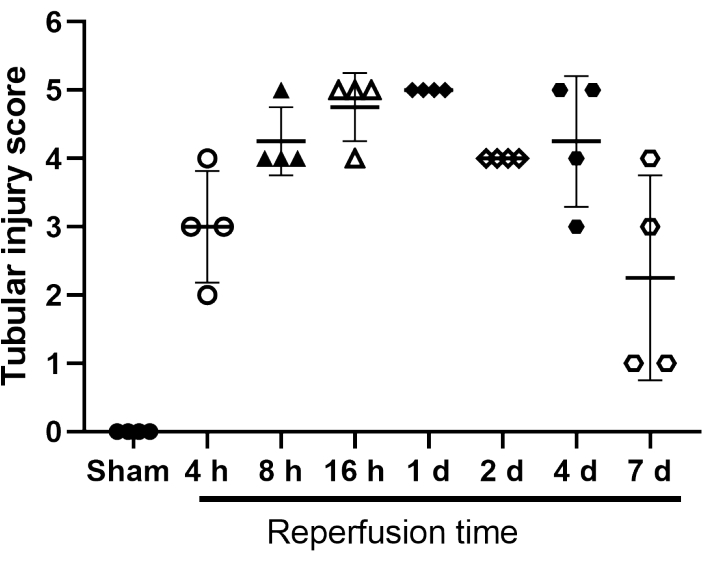 Table 1: Most significant pathological changes over time. Diagnosed based on microscopic examination of 4-6 animals per group.

Mouse renal IRI models are popular in biomedical research due to their relatively low operational costs and the availability of diverse transgenic models12. The unilateral renal IRI model presented here mimics characteristic pathological changes observed in human renal IRI such as tubular dilatation, necrosis, and fibrosis13. These results are based on varying reperfusion times.

The exposure of the kidney and the proper placement of the vascular clamp are also critical for the success of the experiment. Damage to the renal capsule by improper handling of the forceps during exposure of the kidney through the surgical incision will result in perirenal hemorrhage and inflammation. The vascular clamp should be placed on the renal pedicle occluding the renal artery and the renal vein without affecting the ureter and the suprarenal arteries. Critical for this step is the careful dissection of the adipose tissue surrounding the renal hilum14,16.

This model is cost- and time-effective. Anesthetic consumption per mouse was 156.47 ± 37.88 µL (mean ± SD, n = 17) of a prediluted ketamine/xylazine cocktail (1:10 ketamine, 1:50 xylazine, in saline; stock solution concentration, 100 mg/mL both). Surgery can be performed in a relatively short period. The total surgery time per mouse was 53 ± 5.23 min (mean ± SD, n = 17). With trained personnel, several surgeries can be performed at the same time. In our group, one experienced researcher performed the surgery until the clamp was released from the renal pedicle, while a second one took over from wound closing until the recovery of the mouse. With this approach, we were able to perform a high number of surgeries on a single day. In this model, we used the dorsolateral approach, which results in less trauma and reduced fluid and heat loss from the abdominal cavity as compared with the midline approach16.

Previously published protocols have described the renal pedicle clamping technique to induce acute kidney injury in mice17,18,19. However, in those studies, a contralateral nephrectomy was performed in addition to the unilateral IRI with ischemic times ranging from 15 to 26 min. In this protocol, we induced unilateral ischemia for 30 min while preserving the contralateral kidney. This resulted in a survival rate of 100%. However, this model is not suitable to induce azotemic renal damage due partly to the compensatory effect exerted by the non-surgically intervened contralateral kidney. However, keeping one kidney unaffected in the same animal offers the advantage of using longer ischemia times with a higher survival rate. In addition to this, the contralateral kidney can be utilized to assess possible side effects of test drugs or treatments applied during the experimental procedure and to study kidney-kidney crosstalk effects20,21. For example, this model has been useful in showing reactive oxygen species-induced alterations at the cellular level both in the IRI and contralateral, non-surgically intervened kidney11.

This model has a potential application in studies aiming to identify and characterize markers of unilateral renal damage, renal crosstalk effects, post-renal IRI-induced hemodynamic changes, and potential nephrotoxic effects of drug candidates to be used in renal IRI. This detailed description of the main pathological changes serves as a valuable tool to select the most suitable time to study specific cellular processes, from inflammation and necrosis (4 h to 2 days) to regeneration (4 days) and fibrosis (7 days and later).

The authors declare that there are no conflicts of interest regarding this article.