Endothelial cells play critical roles in the regulation of vascular tone, immunity, coagulation, and permeability. Endothelial dysfunction occurs in medical conditions including diabetes, atherosclerosis, sepsis, and acute lung injury. A reliable and reproducible method to isolate pure endothelial cells from mice is needed to investigate the role of endothelial cells in the pathogenesis of these and other conditions. In this protocol, lung microvascular endothelial cells were prepared from 5-7 day old neonatal mouse pups. Lungs are harvested, minced, and enzymatically digested with collagenase I, and released cells are cultured overnight. Endothelial cells are then selected using anti-PECAM1 (CD-31) IgG conjugated to magnetic beads, and cells again are cultured to confluence. A secondary cell selection then occurs with anti-ICAM2 (CD-102) IgG conjugated to magnetic beads to increase the purity of the endothelial cells, and the cells again are cultured to confluence. The entire process takes approximately 7-10 days before the cells can be used for experimentation. This simple protocol yields highly pure (purity >92%) endothelial cells that can be immediately used for in vitro studies, including the studies focused on endothelial cytokine and chemokine production, leukocyte-endothelial interactions, endothelial coagulation pathways, and endothelial permeability. With many knockouts and transgenic mouse lines available, this procedure also lends itself to understanding the function of specific genes expressed by endothelial cells in healthy and pathologic responses to injury, infection, and inflammation.

The considerable challenges with isolating healthy and pure populations of mouse lung endothelial cells using published methods12,13,14,15,16 led to developing a more reliable and straightforward method to isolate high-quality mouse lung microvascular endothelial cells. Advantages of the current protocol include using neonatal mice, which are readily available, limiting animal husbandry and housing costs. Additionally, in our experience, the viability of endothelial cells from neonatal mice is substantially higher than endothelial cells prepared from adult mice. Because neonatal mice have small lung tissue, they can be digested by placing excised lungs into collagenase, rather than using tracheal instillation of collagenase, which is recommended for collection from adult mice16. This also reduces the time between euthanizing mice and getting their endothelial cells into cell culture media and the incubator without affecting the purity or yield or the reproducibility of endothelial responses. Lastly, pure cell populations were isolated without flow cytometry, which can damage or lead to lower yields of the endothelial cells14,15,17.

The current modified protocol consistently leads to high purity and viable endothelial cells in 7-10 days that can be used immediately for in vitro experiments. Isolating cells directly from knockout animals also minimizes the manipulation of cells before experimentation. These methods could be used to investigate the role of various proteins in endothelial function to discover endothelial-based therapeutic targets for multiple diseases.

All animal procedures were approved by the Institutional Animal Care and Use Committee of the University of California San Francisco. Male C57BL/6 neonatal mouse pups (age 5-7 days) were used for the study. The entire protocol takes 7-10 days (Figure 1).

3. Isolation and plating of the lung cells

6. Confirmation of the endothelial cell surface markers by flow cytometry

This simple protocol allows one to isolate, culture, and characterize mouse microvascular endothelial cells over 7-10 days (Figure 1). Briefly, lungs are excised and enzymatically digested before plating. Immediately after plating, endothelial cells and other cells will float in cell culture media. By the following day, endothelial cells and the contaminating cells will be adhered to the plate, and a vigorous washing technique is needed to remove debris and the floating cells. Once the cells reach confluence, the first immunobead selection is performed. The CD-31-positive cells then begin to grow in a cobblestone formation (Figure 2). Cells that do not have cobblestone morphology or overgrow are contaminants and not endothelial cells13,14,15,16.

A second immunobead selection is then performed using anti-CD-102 coated beads to increase the purity of endothelial cells, similar to other protocols13,16. Cells that have grown to confluence after second immunobead selection can then be used for experimentation. Fluorescence-activated cell sorting (FACS) is used to confirm that the cell population is CD-31- and CD-102-positive (Figure 3). 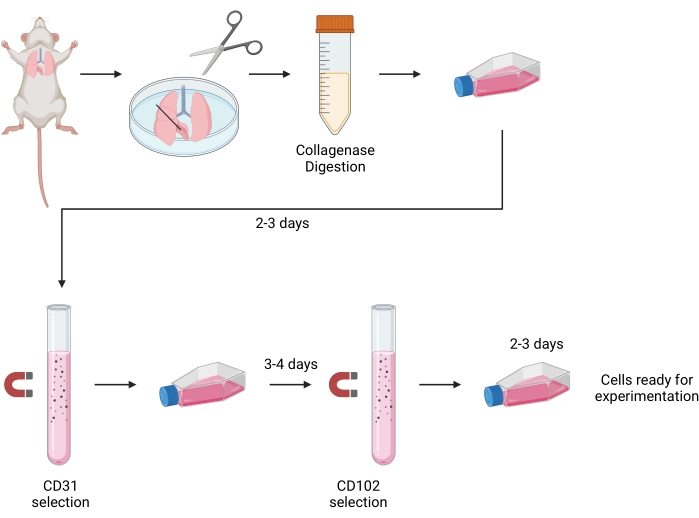 Figure 1: Schematic for isolation of murine lung endothelial cells. Lungs from 5-7 day old neonatal pups are harvested and minced. Minced tissue was enzymatically digested with collagenase I. Cellular suspension is plated and cultured for 2-3 days. Cells then undergo primary immunobead isolation with CD-31-coated beads and are cultured for another 3-4 days. Second immunobead isolation with CD-102-coated beads before culturing another 2-3 days. Cells are now ready for functional experimentation. The image was created by a web-based illustration tool, Biorender. Please click here to view a larger version of this figure. 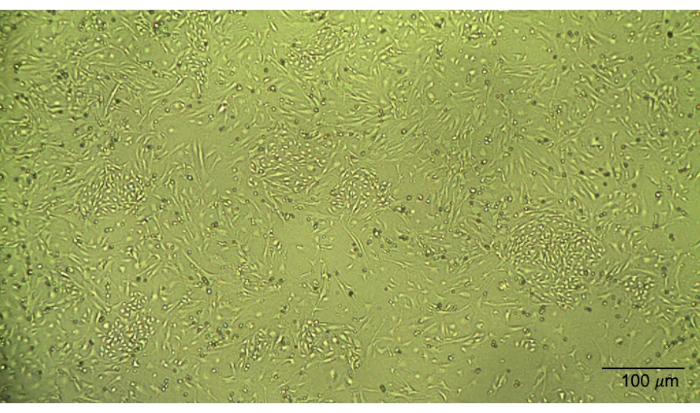 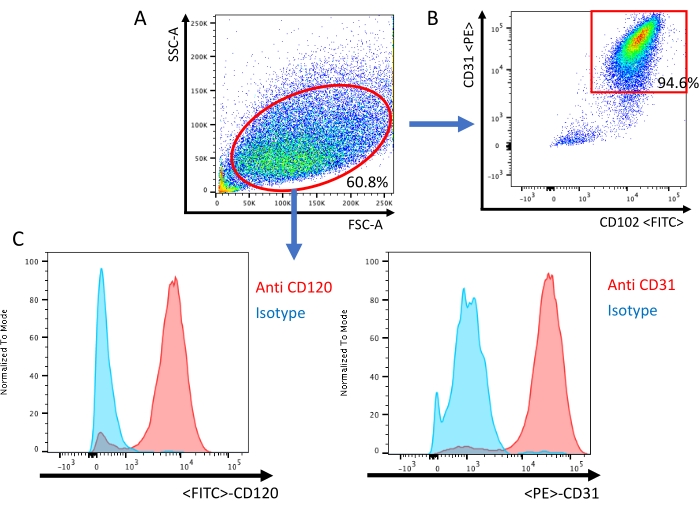 Figure 3: Analysis of endothelial cells by flow cytometry. (A) All events are visualized on a dot plot of the Forward Scatter (FSC) and Side Scatter (SSC). (B) Scatter plot confirmation of murine lung endothelial cells being positive for both endothelial-specific cell surface antigens CD-31 and CD-102. (C) Histogram of the isotype sample and sample stained with CD-31/CD-102 specific antibody. Please click here to view a larger version of this figure.

Figure 4: Cytomix induces murine lung endothelial cell IL-6 production and endothelial cell permeability. Murine lung microvascular endothelial cells from C57BL/6 mice were treated with cytomix (IFNg, TNFa, and IL1b, each at 10 ng/mL). (A) IL-6 levels were then quantified in culture supernatants at 15 h (**p<0.01, n = 4 wells/condition). (B) Electric Cell-Substrate Impedance Sensing was used to measure the transendothelial resistance (TER) repeatedly over 15 h. Data were normalized to the resistance immediately before the addition of the cytomix as designated and was analyzed by two-way analysis of variance (ANOVA) followed by the Tukey post-test19 (**p<0.01, n = 4 wells/condition). Please click here to view a larger version of this figure.

This simple protocol lends itself to high-purity endothelial cells from murine lungs. Although the total time from start to finish is 7-10 days, the hands-on time is around 3-4 h. Compared to other methods13,14,15,16, the current protocol is streamlined, keeping essential steps without compromising yield and purity.

It is worth noting some critical aspects of this protocol. First, it is important to use neonatal pups rather than adult mice. In our experience, endothelial cells from adult mice do not proliferate as easily as cells from neonatal pups, and they are easily overrun by cells with spindle-like morphology consistent with fibroblasts or mesenchymal stem cells15,16. One possible explanation for the difference is that lung development is in the alveolar stage in neonatal mice, characterized by the more rapid proliferation of endothelial cells20. There may also be some degree of senescence with aging21. Enzymatic digestion time also needs to be precise, as underdigestion can lead to a low yield single-cell suspension. In contrast, over digestion can lead to a substantial amount of cell death. We have determined that the optimal time for collagenase digestion is determined to be 45 minutes. This is then followed by mechanical dissociation with a blunt cannula. Instilling intratracheal collagenase during enzymatic digestion has also been reported14,15; however, this can be time-consuming and leads to incomplete digestion during the current work. Lastly, some protocols proceed directly to immunobead isolation immediately following enzymatic digestion13,16. We have found that culturing the cells from the dissociated lung in the medium for a day or two before making the immunobead selection substantially increases the yield of viable and highly pure endothelial cells. This may be related to the speed of getting isolated cells into the tissue culture medium, which leads to less cell death in the early stages after removal from the mice, higher initial seeding density, and time for the endothelial cells to adhere and proliferate before the first immunobead isolation.

Limitations of the preparation and analyses of mouse endothelial cells are as follows. Each mouse only provides a limited number of cells that must be used within a few passages. This issue can be overcome by pooling lung digest from several mice. Unfortunately, we are unsuccessful in our efforts to cryopreserve and thaw the cells for future use. Despite these limitations, mouse endothelial cells have some advantages. They can be helpful, particularly in situations where human endothelial cells either cannot be used (e.g., gene knockout), when complementary studies are required to corroborate results with human cells, or when the heterogeneity of responses of endothelial cells from different human donors makes reproducibility between experiments problematic6. The homogenous endothelial cell population from genetically identical mice allows for reproducibility between experiments and the study of specific genes and pathways under stable background conditions.