Skip to content
Trial ends in Request Full Access Tell Your Colleague About Jove
This is a sample clip. If you're new to JoVE sign up and start your free trial today to watch the full video! If your institution has an existing subscription, log in or sign up to access this video.
Biology
Author Produced
CITE THIS  SHARE

A ribosomal RNA (rRNA) depletion protocol was developed to enrich messenger RNA (mRNA) for RNA-seq of the mosquito gut metatranscriptome. Sample specific rRNA probes, which were used to remove rRNA via subtraction, were created from the mosquito and its gut microbes. Performance of the protocol can result in the removal of approximately 90-99% of rRNA.

The mosquito gut accommodates dynamic microbial communities across different stages of the insect's life cycle. Characterization of the genetic capacity and functionality of the gut community will provide insight into the effects of gut microbiota on mosquito life traits. Metagenomic RNA-Seq has become an important tool to analyze transcriptomes from various microbes present in a microbial community. Messenger RNA usually comprises only 1-3% of total RNA, while rRNA constitutes approximately 90%. It is challenging to enrich messenger RNA from a metagenomic microbial RNA sample because most prokaryotic mRNA species lack stable poly(A) tails. This prevents oligo d(T) mediated mRNA isolation. Here, we describe a protocol that employs sample derived rRNA capture probes to remove rRNA from a metagenomic total RNA sample. To begin, both mosquito and microbial small and large subunit rRNA fragments are amplified from a metagenomic community DNA sample. Then, the community specific biotinylated antisense ribosomal RNA probes are synthesized in vitro using T7 RNA polymerase. The biotinylated rRNA probes are hybridized to the total RNA. The hybrids are captured by streptavidin-coated beads and removed from the total RNA. This subtraction-based protocol efficiently removes both mosquito and microbial rRNA from the total RNA sample. The mRNA enriched sample is further processed for RNA amplification and RNA-Seq.

Next-generation sequencing technology has greatly advanced metagenomics study by allowing to assess the taxonomic composition and genetic functionality of a microbial assemblage. RNA-Sequencing (RNA-Seq)1 can bypass culture-based methods to investigate microbial metatranscriptomes in different contexts 2-5. A major obstacle to microbial RNA-seq is the difficulty in enriching mRNA, as the prokaryotic mRNA species are not stably polyadenylated. Therefore, oligo d(T) mediated messenger enrichment is not applicable. Removal of abundant rRNA is an alternative approach to enrich mRNA. Commercial rRNA depletion kits, such as Microexpress Bacterial mRNA Enrichment kit (Ambion), RiboMinus Transcriptome Isolation Kit (Bacteria) (Life Technologies), and mRNA-ONLY Prokaryotic mRNA Isolation kit (Epicentre) that preferentially degrades rRNA with an exonuclease, have been used for removing rRNA 6-8. However, the capture probes in Microexpress or RiboMinus are good for removing known rRNA from typical Gram-positive and Gram-negative bacteria (see manufacturers' specifications), but less compatible with rRNA from unknown microbes. Consequently, the removal may be less efficient for metagenomic samples8-10. Besides, the mRNA abundance fidelity was questionable when the exonuclease treatment was applied 11. Overall, subtraction-based rRNA depletion was less biased and more effective in mRNA enrichment in metagenomic settings 10-13.

Note: The protocol was developed based on previously described methods12,13,15.

Note: The rRNA depleted RNA samples are subject to mRNA amplification if necessary8.

The protocol includes three sections: (1) preparation of metagenomic DNA templates for rRNA PCR; (2) creation of sample specific capture rRNA probes; (3) depletion of rRNA from total RNA by subtractive hybridization. Isolation of high quality metagenomic DNA and RNA is essential to the entire process. The modified Meta-G-Nome DNA isolation protocol yields high-quality metagenomic DNA from mosquito guts, as shown in Figure 2. It can be challenging to isolate high-quality total RNA from mosquito guts. This is likely due to the presence of various enzymes, including RNase, in mosquito guts. We compared the total RNA extraction performance of Qiagen RNA isolation kit to Roche TriPure. Electropherogram of Agilent Bioanalyzer analysis showed that the total RNA isolated using TriPure contains clear rRNA peaks (Figure 3), which is not seen in the RNA obtained using the Qiagen kit. Perhaps mosquito-derived RNase is effectively inactivated by the phenol in TriPure. Typically, 50 mosquito guts yield ~ 20 μg total RNA. The ideal amount of total RNA input for the current rRNA depletion process is ~1 μg, which optimizes the efficiency of rRNA subtraction and yields ~ 150 ng purified RNA. Figure 4 shows the comparison of RNA electropherograms before and after rRNA subtraction. The rRNA was efficiently removed while the non-rRNA species were greatly enriched in the remaining RNA. The presence of large size RNA (>2,000 bp) indicates a good quality of enriched mRNA (Figure 4B). The protocol can be scaled up to accommodate a greater input of RNA for processing. Usually 5 μg RNA is required for the RNA-seq process. Therefore, we used MessageAmp II-Bacteria RNA Amplification Kit to generate an adequate amount of rRNA depleted RNA for RNA-Seq. We recommend using 150 ng or more purified RNA for the RNA amplification to ensure the fidelity of amplification. This protocol has been applied to a mosquito gut RNA-Seq project. The rRNA depletion was effectively achieved by using sample derived capture probes. Table 3 lists the percentage of rRNA reads in the RNA-Seq output of four samples. Two sugar-fed and two blood-fed gut samples were processed for depletion and RNA-Seq. The Illumina sequencing generated 23-24M reads for each sample. The rRNA subtraction effectively removed 90-99% rRNA from both mosquito tissue and microbes in the gut samples. Depletion was almost complete in the sugar-fed gut samples, and 6.12-10.98% rRNA remained in the blood-fed samples (Table 3).

Table 1. Primer sets for rRNA fragment amplification Bacterial 16S and 23 primers are designed based on 20,19. T7 promoter sequences are in bold.

Table 2. Components of in vitro synthesis of rRNA probes. 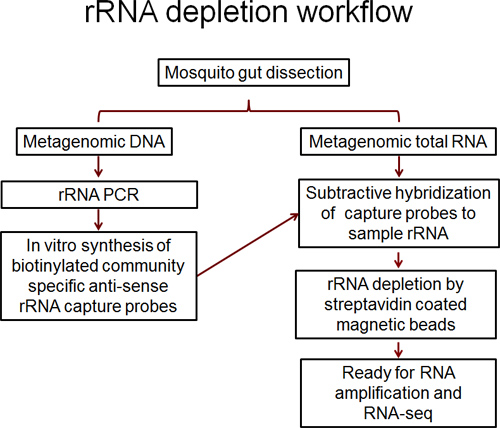 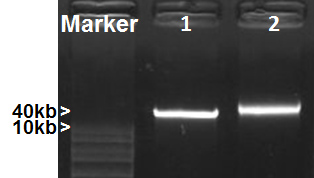 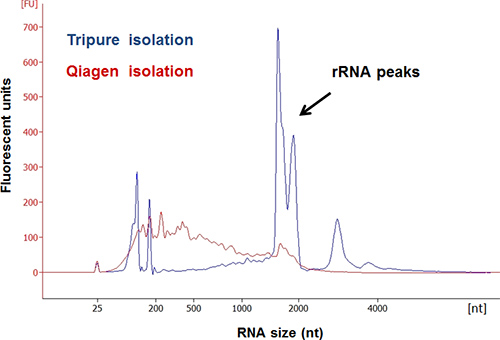 Figure 3. Comparison of two total RNA isolation reagents for their efficiency in extracting a quality RNA from mosquito gut. Overlay of electropherograms shows that total RNA from TriPure isolation (in blue) had rRNA peaks and wide RNA distribution, while that from Qiagen isolation (in red) had no clear rRNA peaks. 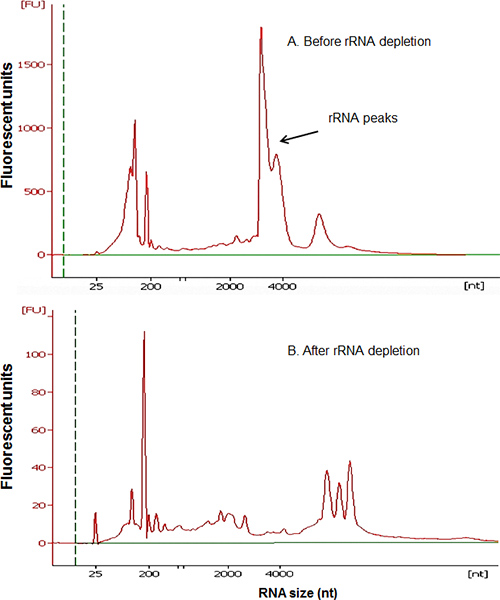 A complex microbial community resides in the mosquito gut ecosystem 14,16,17. Metatranscriptomic sequencing (RNA-seq) can reveal context dependent functional information by interrogating the entire microbial transcriptome4,18. Technically, oligo-d(T) mediated enrichment of prokaryotic mRNA is not applicable due to the absence of stable poly (A) tails of the messengers. Alternatively, rRNA depletion has been used for mRNA enrichment. Here, we developed a subtraction-based protocol to deplete rRNA using rRNA probes made from the very own metagenomic DNA in the mosquito gut microbial community. The efficiency of the rRNA removal depends on the coverage of the rRNA capture probes that are generated by the rRNA PCR. The annealing efficiency of different primer sets targeting conserved regions varies across different taxa 19. Therefore, we recommend trying different combinations of primers on metagenomic samples, and then pooling the rRNA products to maximize the coverage. In our procedure, we create capture probes by combining rRNA PCR products of two forward and two reverse primers, which can form 4 combinations of primer sets (Table 1). In addition, rRNA intends to form a secondary structure. Compared to full length rRNA as probes13, smaller rRNA fragments have a lower tendency to form secondary structure, which may facilitate the hybridization of capture probes to the sample rRNA. The biotinylated probes efficiently hybridize to rRNA in the total RNA sample and the hybrids are removed by capturing with streptavidin coated beads. The procedure removes most of the rRNA (Figure 4). In the four samples we have processed, 90-99% of rRNA was effectively depleted (Table 3). This procedure can be further modified for a variety of insect-associated microbiome studies.

This work was supported by NIH grant 1SC2GM092789-01A1, and MS was a research scholar of NMSU Howard Hughes Medical Institution Undergraduate Research Programs. The video was directed and produced by Amy Lanasa and coordinated by Dr. Philip Lewis with the Creative Media Institute at NMSU.