An RNA pull-down protocol is optimized here for detection of interactions between RNA-binding proteins (RBPs) and noncoding as well as coding RNAs. An RNA fragment from androgen receptor (AR) was used as an example to demonstrate how to retrieve its RBP from lystate of primary brown adipocytes.

RNA-binding proteins (RBPs) are emerging as a regulatory layer in the development and function of adipose. RBPs play a key role in the gene expression regulation at posttranscriptional levels by affecting the stability and translational efficiency of target mRNAs. RNA pull-down technique has been widely used to study RNA-protein interaction, which is necessary to elucidate the mechanism underlying RBPs' as well as long non-coding RNAs' (lncRNAs) function. However, the high lipid abundance in adipocytes poses a technical challenge in conducting this experiment. Here a detailed RNA pull-down protocol is optimized for primary adipocyte culture. An RNA fragment from androgen receptor's (AR) 3' untranslated region (3'UTR) containing an adenylate-uridylate-rich elementwas used as an example to demonstrate how to retrieve its RBP partner, HuR protein, from adipocyte lystate. The method described here can be applied to detect the interactions between RBPs and noncoding RNAs, as well as between RBPs and coding RNAs.

RBPs are proteins that bind to the double or single stranded RNA in cells and participate in forming RNA-protein complexes. RBPs may bind a variety of RNA species, including mRNA and long noncoding RNAs (lncRNAs), and exert their influence at post-transcriptional levels. Both RBPs and lncRNAs are emerging as novel regulators in adipose development and function1,2,3. To understand the mechanism of RBP- and lncRNA-mediated regulation of cellular pathways, it is often necessary to detect the interaction between a specific RNA molecule and one or several RBPs, and, sometimes, to identify the full spectrum of protein partners of a RNA transcript. However, the experiment can be challenging due to the high content of lipids in adipocytes. The RNA pull-down protocol described here can be employed to retrieve the protein partners of a specific RNA from the adipocyte lysates of primary cultures4,5.

Rationale for this protocol is summarized as follows. An RNA bait is in vitro transcribed from an DNA template, biotin-labeled and conjugated to streptavidin-coated magnetic beads4. The RNA bait is incubated with cellular lysates to allow for the formation of RNA-protein complexes, which are subsequently pulled down on a magnetic stand. More specifically, the RNA pull-down protocol described below use an RNA fragment from AR 3'UTR as the bait to retrieve HuR protein, a universally expressed RBP bound to 3'UTR of mRNAs6,7, from theadipocytelysate of primary culture. To test the binding specificity of this assay, a non-relevant RNAas well as blank streptavidin beads is included as control. This protocol is compatible with western blotting or mass spectrometry (MS) to confirm the capture of a specific RBP or to identify the full repertory of captured RBPs, respectively8.

Several techniques are available to study RNA-protein interactions. To reveal RNAs bound by a given RBP, RIP (RNA immunoprecipitation) and CLIP (UV crosslinking and immunoprecipitation) can be applied. In contrast, to identify protein partners of a given RNA, RNA pull-down, ChIRP (chromatin isolation by RNA purification), CHART (capture hybridization analysis of RNA targets) and RAP (RNA antisense purification) can be applied. In comparison with the later ones, RNA pull-down technique takes less effort to set up. It can be employed to capture proteins in vitro and in vivo. The in vivo approach of RNA pull-down, which is technically more challenging than its in vitro counterpart, preserves RNA-protein interactions by crosslinking in cells, captures aptamer-tagged RNAs of interest from cells, and subsequently detects bound RBPs. RNA pull-down can be used to enrich low abundant RBPs, and to isolate and identify the RNA-protein complexes that have diverse functional roles in controlling cellular regulation9,10.

NOTE: The RNA of interest in the context of this study is a fragment of AR 3'UTR.

NOTE: Use a magnetic stand for separation of the magnetic beads and supernatant.

NOTE: Ensure all procedures of cell lysate preparation are made on ice, and all buffers are chilled on ice. Pre-chill dounce glass homogenizers on ice.

5. Binding and Elution of RBP

6. Western Blotting for Verification of RBP 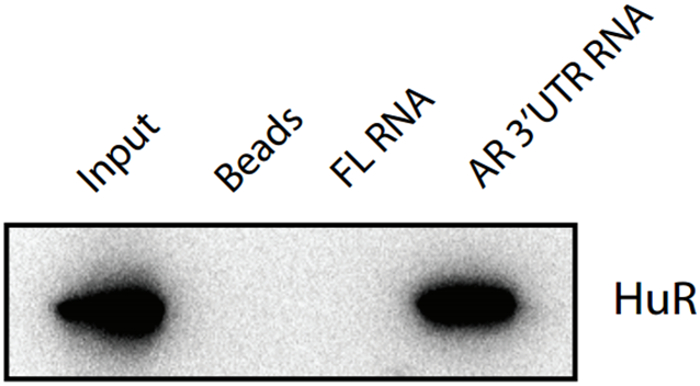 lncRNAs and RBPs have vital roles in health and disease, however the molecular mechanisms of these molecules are poorly understood. Identification of proteins that interact with lncRNA molecules is a key step towards elucidating the regulatory mechanisms. Enrichment of RBPs by the RNA pull-down assay system is based on in-solution capture of interacting complex so that proteins from a cell lysate can be selectively extracted using biotinylated RNA baits bound to streptavidin magnetic beads. Several other methods such as ChIRP, CHART and RAP may achieve the same goal, however these methods takes more effort to set up than the RNA pull-down technique16,17,18.

The main strength of RNA pull-down is that it is relatively a simple protocol and easy to perform. Both CHIRP and RAP involve a crosslinking step that preserves naturally occurring RNA-protein complexes and the design of a full set of antisense oligonucleotides (90 nucleotides long in RAP, and 20 nucleotides long in ChIRP) tiling the entire target RNA16,17,18. RNA folding is a critical step in the RNA pull-down assays. The main limitation of this protocol is that the target RNAs are synthesized in vitro and may not be correctly folded into native structure to allow proper binding with its RBP(s). Misfolded non-native RNAs may either fail to form RNA-protein interactions and invalidate functional assays, or form interactions that only occur in vitro under nonphysiological conditions. Although the pull-down protocol described here adopted a well-recognized procedure for RNA folding13,14 (see section 1.7), it doesn't guarantee proper folding for other RNA transcripts.

RNA pull-down is often coupled with RIP as a complementary approach to detect the RNA(s) bound by the RBP of interest19. Another critical step in this protocol is the removal of lipid fraction from total cell lysate (see section 4.5) because the high lipid abundance in mature adipocytes presents a major technical challenge. The protocol described here is particularly developed for use with adipocytes. However, the basic components of this protocol and the stringency of all buffers used can be altered and adapted for application to other cell culture models. For tissues that have high levels of endogenous RNase, different RNA pull-down protocols may be applied.

RNA pull-down, which uses RNAs of interest to identify the associated RBPs, is an effective and efficient technique to probe the pivotal functions and mechanisms of lncRNAs, which have a wide range of roles in human cells. Future development of RNA-based capture, including RNA pull-down, will be needed to address challenges with defining the components, assembly and function of RNA-protein complexes, as well as generating sufficient RBPs from low abundant RNA-protein complexes for MS.

A correction to the author list was made to: Detection of RNA-binding Proteins by In Vitro RNA Pull-down in Adipocyte Culture.