Here we present an ex-vivo mixed monolayer culture system for the study of human glioma cell (hGC) migration in real-time. This model provides the ability to observe interactions between hGCs and both myelinated and non-myelinated axons within a compartmentalized chamber.

Glioblastoma is one of the most aggressive human cancers due to extensive cellular heterogeneity and the migration properties of hGCs. In order to better understand the molecular mechanisms underlying glioma cell migration, an ability to study the interaction between hGCs and axons within the tumor microenvironment is essential. In order to model this cellular interaction, we developed a mixed culture system consisting of hGCs and dorsal root ganglia (DRG) axon-oligodendrocyte co-cultures. DRG cultures were selected because they can be isolated efficiently and can form the long, extensive projections which are ideal for migration studies of this nature. Purified rat oligodendrocytes were then added on purified rat DRG axons and induced to myelinate. After confirming the formation of compact myelin, hGCs were finally added to the co-culture and their interactions with DRG axons and oligodendrocytes was monitored in real-time using time-lapse microscopy. Under these conditions, hGCs form tumor-like aggregate structures that express GFAP and Ki67, migrate along both myelinated and non-myelinated axonal tracks and interact with these axons through the formation of pseudopodia. Our ex vivo co-culture system can be used to identify novel cellular and molecular mechanisms of hGC migration and could potentially be used for in vitro drug efficacy testing.

Glioblastoma is one of the most aggressive and lethal tumors of the human brain. The current standard of care includes surgical resection of the tumor followed by radiation1 plus concomitant and adjuvant administration of temozolomide2. Even with this multi-therapeutic approach, tumor recurrence is inevitable3. This is partly due to the extensive migratory nature of the tumor cells, which invade the brain parenchyma creating multiple finger-like projections within the brain4 that make complete resection unlikely.

In recent years, it has become evident that the aggressiveness of glioblastoma is due, in part, to the presence of a population of cancer stem cells within the tumor mass5,6, which exhibit high migratory potential7,8, resistance to chemotherapy and radiation9,10 and the ability to form secondary tumors11. GSCs are capable of recapitulating original polyclonal tumors when xenografted to nude mice5.

Despite the wealth of knowledge regarding the genetic background of glioblastomas, studies on glioma cell (GC) migration are currently hindered by a lack of efficient in vitro or in vivo migration models. Notably, while glioma cell-axonal interactions modulated by cellular and environmental factors are a core component of glioma invasion, to our knowledge there is currently no experimental system with the ability to model these interactions12,13,14. To address this deficiency, we developed an ex vivo culture system of primary hGCs co-cultured with purified DRG axon-oligodendrocytes that results in elevated expression of differentiated tumor markers as well as extensive migration and interaction of hGCs with myelinated and non-myelinated fibers. This ex vivo platform, due to its compartmentalized layout, is suitable for testing the effects of novel therapeutics on hGC migration patterns.,

The protocols for collection, isolation, and propagation of patient-derived human glioma cells were approved by the IRB committee of Rhode Island Hospital. All animals were maintained according to the NIH Guide for the Care and Use of Laboratory Animals. All animal use protocols were approved by the Institutional Animal Care and Use Committee of Rhode Island Hospital.

In order to study the interaction of hGCs with axons, we generated purified DRG axons as previously described15,16,17,18. These purified DRG axons were then seeded with hGCs, which formed GFAP+/Ki67+ tumor-like structures integrated within the axonal network, while individual hGCs migrated either in association or between the axons (Figure 2). To determine how hGCs interact with myelinated axons, we seeded DRG axon cultures with purified rat oligodendrocytes and induced myelination as previously described19,20,21. Addition of hGCs on the myelinated DRG-oligodendrocyte co-cultures showed that hGCs migrate in association with the myelinated axons and away from the tumor mass through the formation of pseudopodia as shown in our recent paper (Figure 3)22. Oligodendrocyte myelination can be determined using Myelin Basic Protein (MBP) staining of the cultures. To quantify the migration of hGCs in these cultures we measured the total area of the culture occupied by the migrating hGCs using Image J software22. 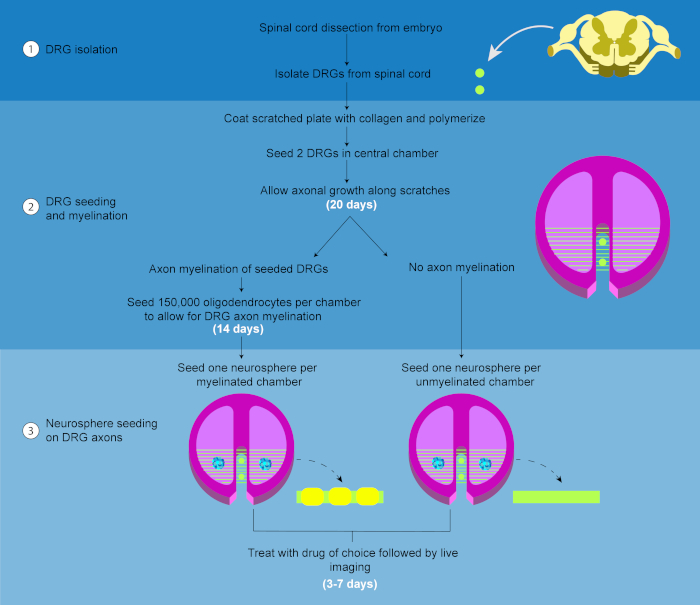 Figure 1: Schematic summary of the protocol. Please click here to view a larger version of this figure. 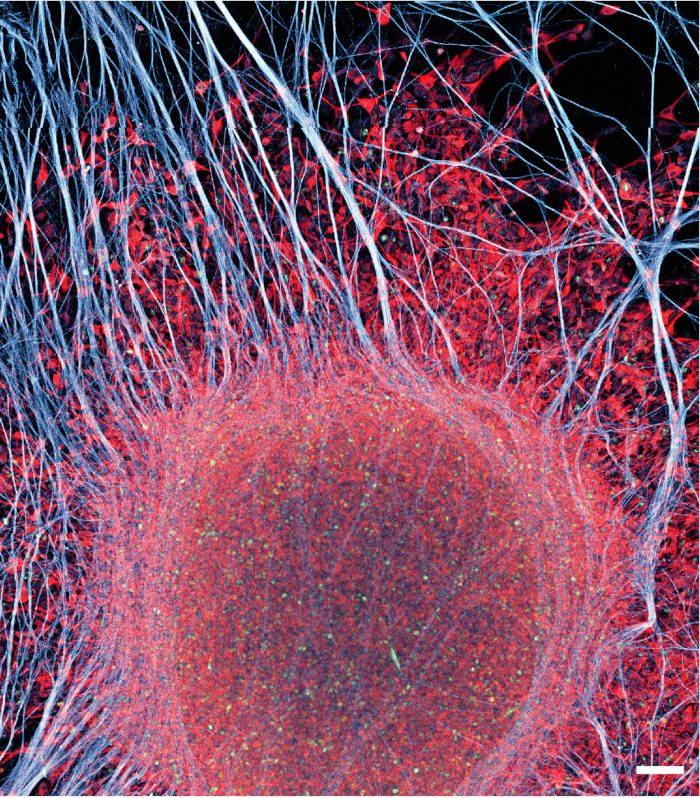 Figure 2: hGCs form tumor-like structures in co-culture with DRG axons. The culture was fixed and stained for the tumor markers GFAP (red) and Ki67 (green), while the axons were stained with Neurofilament (blue). Scale bar: 200 μm. This figure has been modified from our recently published paper22. Please click here to view a larger version of this figure. 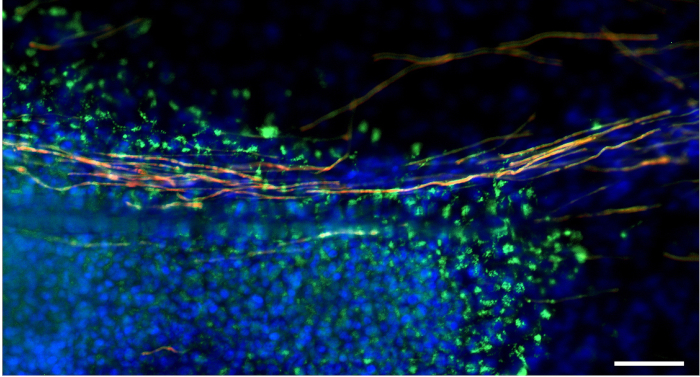 Migration studies for hGCs may be performed by using Boyden chamber systems or scratch assays. However, while these experiments fail to give any information regarding the interactions of tumor cells with other surrounding tissues, the present system can recapitulate GC interactions with myelinated and non-myelinated fibers. Furthermore, to study tumor formation and end-point migration, organotypic slice cultures of the rodent brain or in vivo implantation of glioma cells into the rodent brain or flank have previously been utilized23,24,25. More recent efforts on three-dimensional modeling of glioma cells have utilized systems like collagen layers26,27,28, astrocyte-based scaffolds29,30, extracellular matrix layers31, electrospun nanofibers32, and hydrogels33. While these experiments produce satisfactory end-point results regarding migration, they lack the ability to be studied in real-time by high-resolution microscopy.

Here, we have demonstrated a new approach to studying the migration of hGCs by preparing a DRG co-culture in a compartmented chamber. If access to fresh GBM tissue is available, hGCs can be isolated and cultured reliably. Although hGCs take a long time to form neurospheres initially, the cultures are easy to maintain and subculture once the spheres form. To ensure the success of the hGC culture, the tissue should be processed as quickly as possible. The time between resection and processing should be minimized as much as possible, and samples should always be transported on ice.

The DRG is also easy to isolate, extends its axons longer than cortical neurons and can be easily myelinated in culture with oligodendrocytes. hGC neurospheres or dissociated hGCs are co-cultured in the distal compartments of the chambers, allowing for live cell imaging and real-time quantification of cellular interactions with axons and myelinated fibers. Additionally, this protocol is not limited to only DRG cultures, as cortical neurons may also be isolated and myelinated with few modifications to this protocol. This model may also be used to study other forms of brain cancer.

hGC migration along myelinated and non-myelinated axonal tracts in the brain has not been well described due to the lack of efficient and reproducible ex vivo models. We describe here the development of an innovative ex vivo culture system to study how glioma cells migrate along axons and myelin, a crucial component in developing new treatments that specifically target tumor cell migration. Our culture system is versatile since there is fluidic isolation between compartments, facilitating the ability to study various novel treatments or differing concentrations of substances that affect glioma cell migration. An additional advantage of our co-culture system is the ability to monitor hGC migration and the effects of the various treatments in real-time. The protocol described here is currently being used as the basis for the development of more sophisticated biomimetic 3-dimensional ex vivo systems using exclusively human cellular components that could be used to assess toxicology and efficacy of novel drugs.

This work was supported by internal funds of the Department of Neurosurgery, Brown University to N.T.