A protocol that uses enhanced QM/MM method to investigate the isotopic effect on the double proton transfer process in porphycene is presented here.

Isotopic substitution has been used to detect the structural properties of molecules and rate constants of reaction kinetics6. Single deuterium substitution in the inner hydrogen of porphycene leads to an asymmetric shape of the molecule. The hydrogen bond may expand or contract because of mass difference between the hydrogen and deuterium atoms. The isotopic substitution introduces a perturbation in the scaffold of porphycene. The question arises that whether asymmetric structure would affect the proton transfer process. Limbach and coworkers reported that the replacement of hydrogen with deuterium will compress both hydrogen bonds, and the cooperative coupling of two hydrogen bonds in porphycene may favor concerted mechanism7, whereas Yoshikawa stated the deuteration would make the stepwise mechanism contribute more than the concerted mechanism8. Experimental techniques, such as force spectroscopy, have been developed to capture tautomerization details in a single porphycene9. However, it is still challenging to determine the atomic details of proton transfer experimentally because of its transient nature.

Theoretical calculations and simulations can act as complementary tools in elucidating the reaction mechanisms of proton transfer. Among different theoretical methods, molecular dynamics (MD) simulations can monitor dynamic motions of each atom, and has been widely used to reveal complex mechanisms in chemical and enzymatic reactions. However, regular MD simulations tend to suffer from insufficient sampling issue, especially when high energy barrier exists in the process of interest. Therefore, enhanced sampling methods have been developed, which include transition path sampling10,11, umbrella sampling (US)12,13, and integrated tempering sampling (ITS)14,15. Combination of different enhanced sampling methods can further increase sampling efficiency16,17,18. To harness the enhanced sampling algorithms in simulating chemical reactions, we have implemented the selective integrated tempering sampling (SITS) method with quantum mechanical and molecular mechanical (QM/MM) potentials recently19. The proposed SITS-QM/MM method combines the advantages from both methods: the SITS method accelerates the sampling and can explore all possible reaction channels without prior knowledge of the reaction mechanism, and QM/MM provides more accurate description of the bond forming and bond breaking process, which cannot be simulated by MM methods solely. The implemented SITS-QM/MM approach has successfully uncovered concerted double proton transfer, uncorrelated and correlated stepwise double proton transfer mechanism in different systems, without pre-defining reaction coordinates19. For porphycene, the stepwise but correlated proton transfer character has been reported19. The hybrid SITS-QM/MM method was used to investigate the isotopic effect in porphycene in our study, and below are the detailed descriptions of the algorithm and protocol of our method.

We have implemented SITS method with hybrid QM/MM potentials. The effective potential of SITS was defined to include the potential energy at different temperatures with the weighting factors nk to cover wider temperature ranges,

where, N is the number of canonical terms, βk is the inverse temperature, and nk is the corresponding weighting factor for each canonical component. UE(R) and UN(R) represent the enhanced and non-enhanced terms in SITS and are defined as,

into one Us term in SITS, 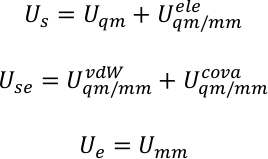 The PMF profile along a collective variable τ(R) is derived as,

The method has been implemented in the QM/MM MD simulation package QM4D20. The complete source code and documentation can be found here: http://www.qm4d.info/.

The single deuterium substitution effect on double proton transfer process in porphycene was examined in the current protocol (Figure 1). The potential energy of QM sub-system and the water during pre-equilibrium and optimization step were checked to make sure the energy has been broadened to a wider energy range (Figure 2). The representative distance and angle changes (Figure 3 and Figure 4), and the projected free energy changes (Figure 5) were used to characterize the deuterium substitution effect on the geometry and proton transfer process of porphycene. 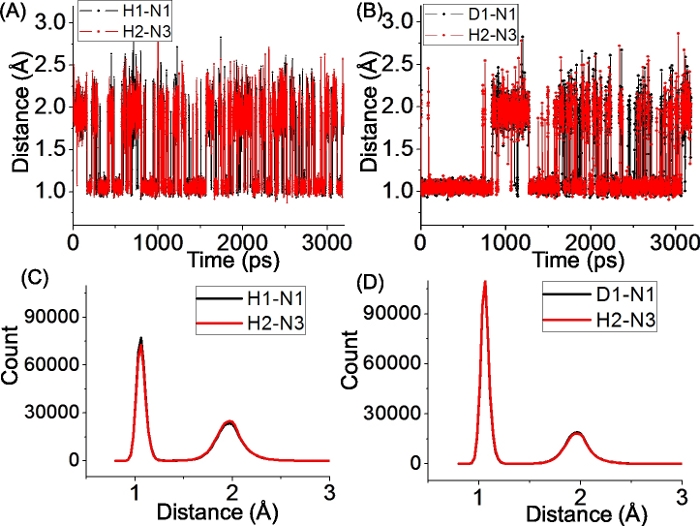 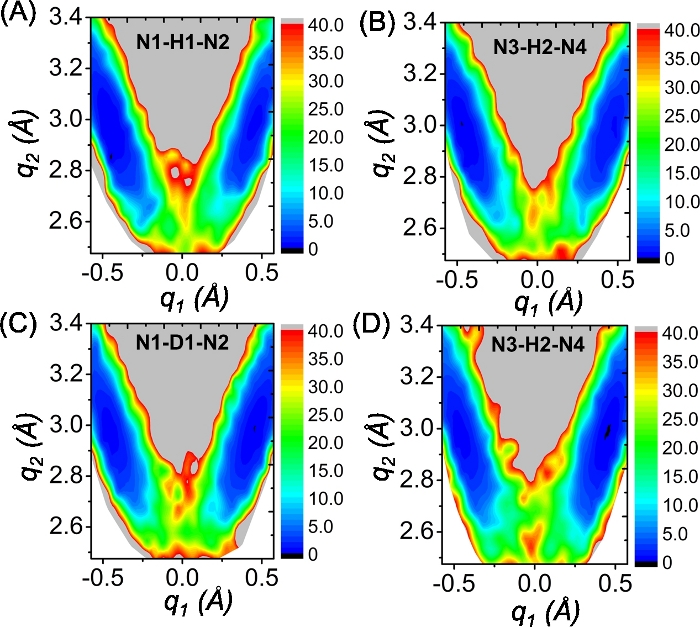 The structure of porphycene was shown in Figure 1. The electrostatic embedding QM/MM hybrid potential with SITS method was used to describe the chemical reactions in water23,24. The proton transfer occurs within porphycene3 and thus porphycene is set as QM region and the reminding water is set as MM region. Herein we adopted DFTB/MIO as our QM method to treat the porphycene by balancing the efficiency and accuracy22,25. As a sampling enhancement technique, SITS simulation was shown to broaden the distribution of Us to high-energy regions and meantime preserve sufficient sampling around the energy region at the temperature of interest. For current case, the energy of Us in the “opt-sits” step was broadened to wider ranges encompassing the energy of the standard MD simulations in the “pre-sits” step as shown in Figure 2. Meantime, the smooth energy changes of Ue indicated that the higher temperature in the QM subsystem would not bring perturbation into the environment. SITS-QM/MM method realized enhanced sampling at the interested QM region without affecting the potential energy of water.

From distance changes in Figure 3, we noticed that H1 transferred from N1 to N2 to form a transit cis state, and then initiated a consecutively rapid H2 transfer to arrive the other trans state again; and vice versa. The dynamics proton transfer process is shown in Supplementary Movie 1. Deuterium D1 transfer between N1 and N2 in the single deuterated porphycene invoked the transfer of H2 between N3 and N4. Asynchronous distance changes indicated the stepwise double proton transfer process for both of porphycene and single deuterium substituted porphycene. The similar distance distributions of D1-N1 and H2-N3 suggested that the cooperative effect on two hydrogen bonds26. Consistent with previously reported primary geometric isotope effect26, the distance of D1-N1 is shorter than the distance of H1-N1 (1.048 Å vs. 1.051 Å). As shown in Figure 3, we observed around 135, and 65 times of transfer of H or D for porphycene and its isotopomers within 3.2 ns MD simulations, respectively. Deuteriation may exert less effect on the hydrogen bond angles as shown in Figure 4. The sufficient sampling on the two reaction channels enabled us to calculate the free energy changes of each proton transfer. The obvious isotopic effect was observed in the 2D free energy landscape. The transition state has been shifted from (0.01 Å, 2.52 Å) to (-0.01 Å, 2.76 Å) as revealed from reaction coordinates (q1, q2) (see Figure 5). The higher q2 value means the nonbonded hydrogen bond were expanded. This may come from the asymmetric scaffold of the deuterated porphycene.

Both proton transfer processes in porphycene and deuterated porphycene can be captured by SITS-QM/MM MD simulations without pre-defining the reaction coordinates. Moreover, SITS-QM/MM MD simulations revealed the structural difference that was introduced by isotopic effect. The hydrogen bond D1-N1 was shortened in comparison with H1-N1. The transition state has been shifted toward higher q2 value because of an asymmetric shape caused by deuteration. Though only subtle difference was detected in covalent hydrogen bond, the distance difference may invoke bigger energy difference around the equilibrium bond distance. We are planning to further validate this observation at higher level QM method in the future studies.

The feasibility of SITS-QM/MM has been well validated in the double channel of reactions without pre-defining reaction coordinates in the present study. This method holds potential of searching reaction products from known reactant states if no prior reaction mechanism is provided. We have adopted DFTB/MIO method in our current implementation of SITS-QM/MM approach, and gained a better understanding of the isotopic effect. It is worth noting that the implemented approach is able to capture the free energy changes, but may not capture dynamic properties without considering the quantum tunneling effect. Still, this protocol acts as a starting point to investigate the chemical reaction mechanisms in the condensed environment. We expect SITS-QM/MM method to be extended to higher level QM methods and thus can exploit more complex systems in the future.

This research is supported by the National Key Research and Development Program of China (2017YFA0206801, 2018YFA0208600), Natural Science Foundation of Jiangsu Province, and National Natural Science Foundation of China (91645116). L.X is the Zhong-Wu Specially Appointed Professor of the Jiangsu University of Technology. The authors acknowledge the suggestions from Dr. Hao Hu and Dr. Mingjun Yang.