Here we describe how to tether a fly in an olfactory magnetic-tether (OMT) apparatus. We describe how to align the rare-earth magnets and odor ports, and how to set mass flow rates for both the stimulus delivery and vacuum suction to achieve optimal odor tracking.

It has been clear for many years that insects use visual cues to stabilize their heading in a wind stream. Many animals track odors carried in the wind. As such, visual stabilization of upwind tracking directly aids in odor tracking. But do olfactory signals directly influence visual tracking behavior independently from wind cues? Also, the recent deluge of research on the neurophysiology and neurobehavioral genetics of olfaction in Drosophila has motivated ever more technically sophisticated and quantitative behavioral assays. Here, we modified a magnetic tether system originally devised for vision experiments by equipping the arena with narrow laminar flow odor plumes. A fly is glued to a small steel pin and suspended in a magnetic field that enables it to yaw freely. Small diameter food odor plumes are directed downward over the fly s head, eliciting stable tracking by a hungry fly. Here we focus on the critical mechanics of tethering, aligning the magnets, devising the odor plume, and confirming stable odor tracking.

The OMT is an adaptation of a magnetic tether system [1] designed to incorporate a “virtual plume simulator”. The following protocols will explain how to properly tether flies (Part 1) and provide strategies for setting up the magnets (Part 2) and mass-flow regulated odor delivery system (Part3). The information described here is optimized for this particular system and may vary for components with other technical specifications.

The steps for tethering described here are similar to many previous studies [2] but adapted for use in an OMT [3]. Proper tethering is crucial to ensure robust and repeatable experimental trials. The importance of careful tethering can not be overstated.

Aligning the magnets (Rare-earth-magnets.com) properly is necessary for the fly to achieve a smooth 360 degree range of motion. Follow these steps to properly align the magnets.

When these steps are followed correctly two things should be observed. First, under constant rotating visual stimuli a tethered fly placed in the OMT should rotate smoothly 360 degrees in the yaw axis. “Jerky” turns (called saccades) are characteristic of spontaneous turning behavior in the absence of constant visual stimuli. If flies can apparently not rotate smoothly, improper gluing (see Part 1) and misaligned magnets may be to blame (see Part 2). Second, when the odor is turned on, the fly should head in the direction of the odor. When the odor is turned off, the fly should saccade spontaneously with no preference for any single position in the arena. If flies do not actively track the odor plume, the position of the odor port, the air flow rate and/or the vacuum flow rate may need adjustment (see Part 3).

Tethering flies and eliciting stable odor tracking in this arena is relatively straightforward. It requires practice, patience and trial and error. Many parts of this arena could be further optimized or substituted to yield variations in experimental potential. For example, newer versions of the vacuum chamber are much smaller and allow more space below the arena. Also, the strength and type of rare-earth magnets can be varied slightly and additional odor ports could be added to increase the number of odor types and/or concentrations utilized in experiments. We note that any variations in equipment will require tailored optimization. As described here, the OMTA allows users to test the effect of visual cues on odor localization. A wide variety of visual stimuli can be presented with the LED panel system and when coupled with the versatility and expandability of the odor delivery system the system offers the potential to explore visuo-olfactory integration at many levels. This system also adds to the increasing number of quantitative behavioral assays for Drosophila, particularly for characterizing the behavior of flying adults. 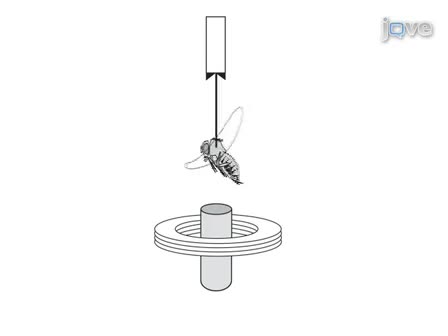