Here we show how to do retro-orbital injection in adult zebrafish.

Drug treatment of whole animals is an essential tool in any model system for pharmacological and chemical genetic studies. Intravenous (IV) injection is often the most effective and noninvasive form of delivery of an agent of interest. In the zebrafish (Danio rerio), IV injection of drugs has long been a challenge because of the small vessel diameter. This has also proved a significant hurdle for the injection of cells during hematopoeitic stem cell transplantation. Historically, injections into the bloodstream were done directly through the heart. However, this intra-cardiac procedure has a very high mortality rate as the heart is often punctured during injection leaving the fish prone to infection, massive blood loss or fatal organ damage. Drawing on our experience with the mouse, we have developed a new injection procedure in the zebrafish in which the injection site is behind the eye and into the retro-orbital venous sinus. This retro-orbital (RO) injection technique has been successfully employed in both the injection of drugs in the adult fish as well as transplantation of whole kidney marrow cells. RO injection has a much lower mortality rate than traditional intra-cardiac injection. Fish that are injected retro-orbitally tend to bleed less following injection and are at a much lower risk of injury to a major organ like the heart. Further, when performed properly, injected cells and/or drugs quickly enter the bloodstream allowing compounds to exert their effect on the whole fish and kidney cells to easily home to their niche. Thus, this new injection technique minimizes mortality while allowing efficient delivery of material into the bloodstream of adult fish. Here we exemplify this technique by retro-orbital injection of Tg(globin:GFP) cells into adult casper fish as well as injection of a red fluorescent dye (dextran, Texas Red ) into adult casper fish. We then visualize successful injections by whole animal fluorescence microscopy.

When performed correctly, it is possible to visualize injected material if it has been labeled in some way. For example, Tg(globin:GFP) red blood cells should be seen under a fluorescent dissection microscope circulating in the vasculature of recipient casper fish soon after injection as shown in figure 2. Likewise, injection of a 70kDa dextran, conjugated to Texas Red® can be visualized in the vasculature of transparent fish immediately following retro-orbital injection (figure 3). Fluorescent kidney cells from Tg(β-actin:GFP) donor fish can also be injected retro-orbitally into irradiated casper recipient fish. These cells will eventually home to the recipient marrow (figure 4a) and may then go on to repopulate the kidney after several weeks (figure 4b).

If the injection is too shallow or the angle of the needle bypasses the retro-orbital venous sinus cavity, injected material may be visualized pooling around the eye or flowing out of it. Alternatively, if the injection is too deep, fish may experience tissue damage or excessive bleeding, though they may still recover. When performed correctly, mortality after retro-orbital injection should be less than 5% of total injected fish and success of delivery to the bloodstream should be greater than 90% of total injected fish.

Figure 1: Illustration of retro-orbital injection technique. The right eye of the fish is represented as an analogue clock in which the seven o clock position corresponds to the correct injection spot. 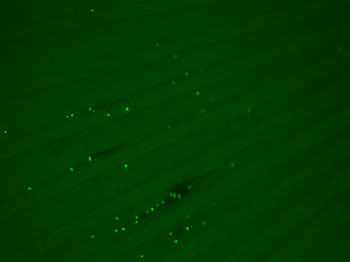 Figure 2: Tg(globin:GFP) red blood cells circulating in the vasculature of the tail of an adult casper fish three days after retro-orbital injection. 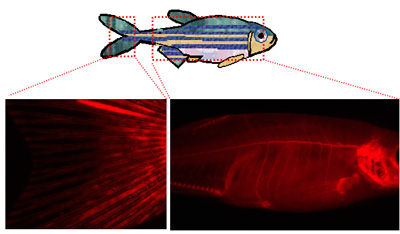 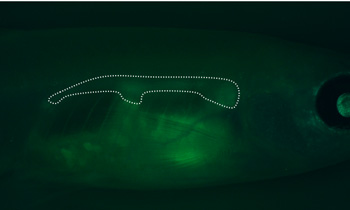 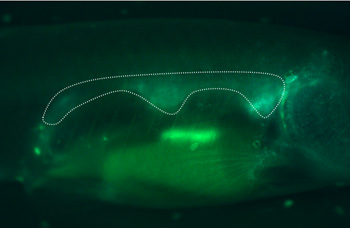 Retro-orbital injection in adult zebrafish gives the highest efficiency of delivery of injected material to the bloodstream with the lowest incidence of mortality. Because of the nature of the injection spot, the puncture appears to heal quickly, decreasing the occurrence of infection and amount of blood loss. The site may even be repeatedly injected during a short time for daily injections of drugs, for example.

Large quantities of drugs must be purchased for traditional treatment methods in adult fish in which fish are simply immersed and soaked in water containing the drug of interest. However, if the drug is injected directly into the bloodstream of the animal, a much smaller quantity is required for treatment, thereby decreasing experimental costs. For certain compounds that are too large to enter the fish circulation through soaking, in the case of certain peptides, retro-orbital injection may also be advantageous.

Further, since RO injection is faster and easier than intracardiac injection techniques in the adult fish, another application of RO injection may include adult chemical genetic screening. Thus, retro-orbital injection may greatly facilitate zebrafish research requiring chemical or chemical delivery.

This work is supported by Howard Hughes Medical Institute and a grant from the NIH for the study of embryonic hematopoiesis. 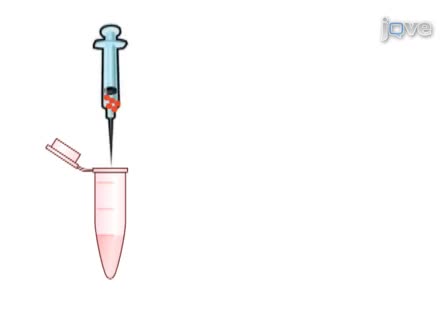