This protocol describes an activity-based assay for detecting matrix metalloproteinases in culture supernatants or body fluids.

Matrix metalloproteinases (MMPs) are zinc-containing endopeptidases. They degrade proteins by cleavage of peptide bonds. More than twenty MMPs have been identified and are separated into six groups based on their structure and substrate specificity (collagenases, gelatinases, membrane type [MT-MMP], stromelysins, matrilysins, and others). MMPs play a critical role in cell invasion, cartilage degradation, tissue remodeling, wound healing, and embryogenesis. They therefore participate in both normal processes and in the pathogenesis of many diseases, such as rheumatoid arthritis, cancer, or chronic obstructive pulmonary disease1-6. Here, we will focus on MMP-2 (gelatinase A, type IV collagenase), a widely expressed MMP. We will demonstrate how to detect MMP-2 in cell culture supernatants by zymography, a commonly used, simple, and yet very sensitive technique first described in 1980 by C. Heussen and E.B. Dowdle7-10. This technique is semi-quantitative, it can therefore be used to determine MMP levels in test samples when known concentrations of recombinant MMP are loaded on the same gel11.

Solutions containing MMPs (e.g. cell culture supernatants, urine, or serum) are loaded onto a polyacrylamide gel containing sodium dodecyl sulfate (SDS; to linearize the proteins) and gelatin (substrate for MMP-2). The sample buffer is designed to increase sample viscosity (to facilitate gel loading), provide a tracking dye (bromophenol blue; to monitor sample migration), provide denaturing molecules (to linearize proteins), and control the pH of the sample. Proteins are then allowed to migrate under an electric current in a running buffer designed to provide a constant migration rate. The distance of migration is inversely correlated with the molecular weight of the protein (small proteins move faster through the gel than large proteins do and therefore migrate further down the gel). After migration, the gel is placed in a renaturing buffer to allow proteins to regain their tertiary structure, necessary for enzymatic activity. The gel is then placed in a developing buffer designed to allow the protease to digest its substrate. The developing buffer also contains p-aminophenylmercuric acetate (APMA) to activate the non-proteolytic pro-MMPs into active MMPs. The next step consists of staining the substrate (gelatin in our example). After washing the excess dye off the gel, areas of protease digestion appear as clear bands. The clearer the band, the more concentrated the protease it contains. Band staining intensity can then be determined by densitometry, using a software such as ImageJ, allowing for sample comparison.

2. Renaturing and Developing the Gel 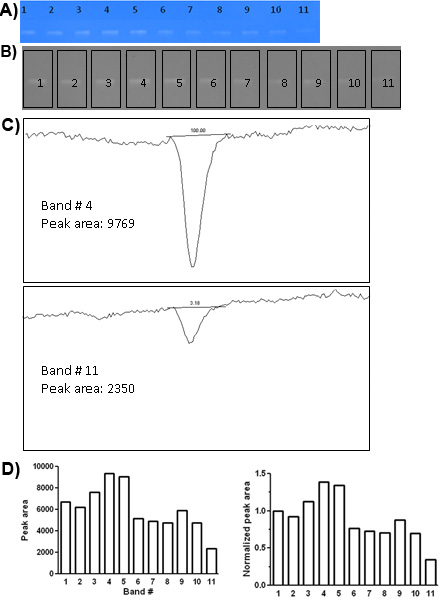 Figure 1. Detection of MMP-2 by gelatin zymography. A, Scanned image of a gelatin gel. Well numbers are indicated at the top of the gel. B, Same gel as in A shown in black and white for densitometry. Each band was selected with a rectangle in ImageJ. C, Two examples of densitometry profiles for the gel shown in A and B (bands # 4 and # 11). A straight line was drawn at the base of each peak to create a closed area. D, Plot of the peak areas for the gel shown in A and B before (left) and after (right) normalization to the density of band # 1. 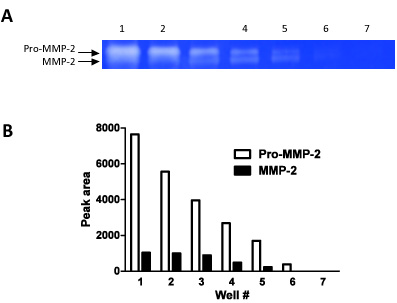 Figure 2. This figure demonstrates how zymography can be used as a semi-quantitative technique. We have loaded serial dilutions (steps of 1:1 dilutions) in 7 consecutive wells and measured the band densities for both pro-MMP-2 and MMP-2.

We have demonstrated how to perform zymographic analysis of MMP-2 in cell culture supernatants.

The amount of sample to load on a gel must be determined empirically depending on the origin and MMP of interest. Loading too little will prevent detection while loading too much may lead to saturation as there is only so much substrate a protease can digest in the area of the band. If necessary, the sample can be diluted in deionized water prior to mixing with loading buffer or the developing time can de reduced from overnight to 4 hours. It is also possible to concentrate proteins in a solution using concentrators (e.g. Millipore catalog # UFC803024). If bands remain barely visible, it may be necessary to develop the gels for a longer period of time, even up to 48 hours. When preparing samples from tissue culture supernatants, it should be noted that fetal bovine serum (and other sera) contains MMPs that can affect the results. For this reason, we collect all of our supernatants after culture in serum-free medium.

The washes described in paragraphs 2.9 and 2.10 of the protocol are necessary to remove the background staining of digested bands. Longer wash times will remove more background, but will also dim the staining of the substrate throughout the gel. If longer wash times are necessary, we recommend scanning the gel every few hours to select the scan with the best contrast.

This technique can be used to detect other MMPs. For example, MMP-9 can be detected on gelatin gels, and also to a lower extent MMP-1, MMP-8, and MMP-13 as gelatin is not their preferred substrate. MMP-1 and MMP-13 are best detected on collagen zymography while casein is the preferred substrate for MMP-11 and also allows for the detection of MMP-1, MMP-3, MMP-7, MMP-12, and MMP-139. MMP-7 (matrilysin) and collagenases (MMP-1 and MMP-13) are difficult to detect when present at low levels in casein or gelatin gels. Addition of heparin to the sample at time of gel loading significantly improves the detection limit for MMP-7. For MMP-1 and MMP-13, the heparin needs to be added to the gel after the electrophoretic run is already under way12.

Since zymography measures enzymatic activity after denaturation and renaturation of the enzymes, it will measure the activity of all MMPs present in the sample. This include enzymes, pro-enzymes, and enzymes bound to endogenous inhibitors (e.g. TIMP-2). It is however possible to determine the level of MMP activation in the sample by comparing the band density of the active enzyme and of that of the pro-enzyme, which will have a slightly higher molecular weight.

Zymography is often not sufficient to identify an MMP. Comparison of the migration level of an MMP with known molecular weight standards does help in the identification but it should be noted that some of these standards contain a reducing agent and that when used under non-reducing conditions they may indicate different molecular weights9. An option is to load a soluble recombinant MMP on the same gel as the test samples. MMPs may however be associated with other proteins, inducing a change in apparent molecular weight. Selective MMP inhibitors can be added to the gel (or part of a gel cut in half) during the incubation in developing buffer as pharmacological tools to identity the MMP of interest.A second technique (Western Blot, immunocytochemistry, or ELISA) is recommended to help in the identification of the MMP of interest. It should be noted that detection limits for Western Blots are often much lower than those of zymographic gels, potentially leading to false-negative results when using this technique.

We would like to thank Dr. S. Ressler (Department of Molecular and Cellular Biology, Baylor College of Medicine) for suggesting the use of protein concentrators to increase the concentration of MMPs in cell culture supernatants.

This project was supported by grants from the Mrs. Clifford Elder White Graham Endowed Research Fund and the NIH/NIAMS (AR059838) to CB. The content is solely the responsibility of the authors and does not necessarily represent the official views of the NIH. 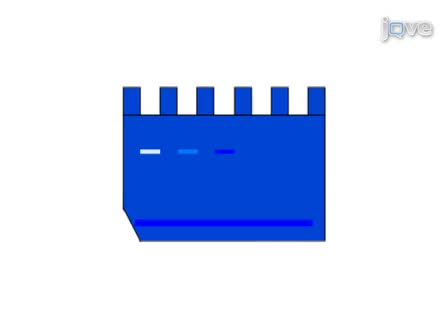