There are many available options for management of the patient with trigeminal neuralgia. Microvascular decompression, while the most invasive of all options, is also the most effective at achieving long term remission of symptoms. Video instruction on how to maximize efficacy and minimize complications with this procedure is described.

Trigeminal neuralgia is a disorder associated with severe episodes of lancinating pain in the distribution of the trigeminal nerve. Previous reports indicate that 80-90% of cases are related to compression of the trigeminal nerve by an adjacent vessel. The majority of patients with trigeminal neuralgia eventually require surgical management in order to achieve remission of symptoms. Surgical options for management include ablative procedures (e.g., radiosurgery, percutaneous radiofrequency lesioning, balloon compression, glycerol rhizolysis, etc.) and microvascular decompression. Ablative procedures fail to address the root cause of the disorder and are less effective at preventing recurrence of symptoms over the long term than microvascular decompression. However, microvascular decompression is inherently more invasive than ablative procedures and is associated with increased surgical risks. Previous studies have demonstrated a correlation between surgeon experience and patient outcome in microvascular decompression. In this series of 59 patients operated on by two neurosurgeons (JSN and PEK) since 2006, 93% of patients demonstrated substantial improvement in their trigeminal neuralgia following the procedure—with follow-up ranging from 6 weeks to 2 years. Moreover, 41 of 66 patients (approximately 64%) have been entirely pain-free following the operation.

In this publication, video format is utilized to review the microsurgical pathology of this disorder. Steps of the operative procedure are reviewed and salient principles and technical nuances useful in minimizing complications and maximizing efficacy are discussed.

4. Exposure of the cerebellopontine angle

5. Decompression of the trigeminal nerve

Using a review of CPT codes obtained from the VUMC Billing Department, the medical records of 59 patients who underwent microvascular decompression by one of two functional neurosurgeons (JSN or PEK) at Vanderbilt University Medical Center (VUMC) from the period of time from July 2006 to July 2009 were assessed in a retrospective fashion. Study data were collected and managed using REDCap electronic data capture tools2 (REDCap is a secure, web-based application based at Vanderbilt University designed to support data capture for research studies). A summary of the demographics of this patient population is visible in Table 1.

Regarding patient demographics (see Table 1), approximately 66% of patients were female. 10% had a history of multiple sclerosis and 19% had a history of previous surgical procedures for TGN (Table 2). Regarding operative results (see Table 3), 93% of patients experienced significant improvement or full resolution of the facial pain at follow-up ranging from 6 weeks to 2 years. Our method of follow-up consisted of a retrospective review of the electronic medical record. 64% of patients reported themselves as pain-free at their most recent clinic visit following the procedure.

Approximately 15% of patients in the series suffered a CSF leak; 6 (10%) of these patients required ventriculoperitoneal shunt insertion (VPSI). Of note, the rate of CSF leak was appreciably higher in the patient population prior to the routine use of bone flap or methylmethacrylate (MM) buttressing of closure. Specifically, 25% of patients who were closed without a bone flap or methylmethacrylate prosthetic flap developed a CSF leak. In contrast, only 8% of patients closed after bone or MM flap placement had evidence of post-operative CSF leakage. In addition to the results described above, Two (3%) of patients suffered a wound infection. There were no instances of cerebellar damage. Two (3%) of patients reported some degree of post-operative hearing loss.

Table 2. Surgical outcomes of patients who underwent previous procedures prior to undergoing microvascular decompression (MVD) in the current series. Patients are stratified by the specific prior procedure. RFL = radiofrequency lesioning. 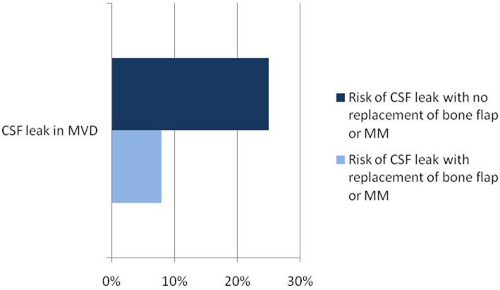 Figure 1. Operative results: rate of post-operative CSF leakage found to be heavily influenced by whether or not closure was buttressed with bone flap replacement or placement of methylmethacrylate (MM) flap. As a result, bone/MM flap replacement of craniectomy defect is now standard protocol for closure of these procedures. 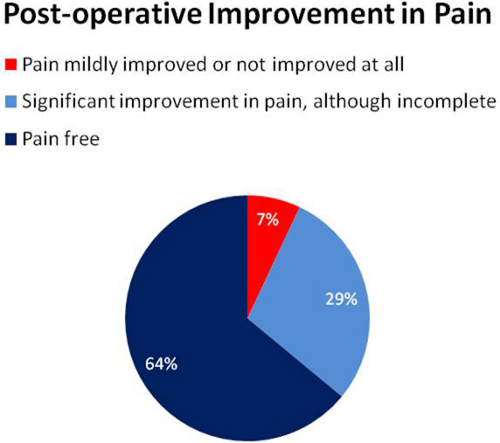 Trigeminal neuralgia is a disorder associated with intense episodes of lancinating pain in the distribution of the trigeminal nerve. The severity of this pain can result in significant patient anxiety, malnutrition and even depression3. While possible proximal etiologies of this condition are diverse and include neoplasm or demyelination, 80-90% of cases are related to compression of the trigeminal nerve by an adjacent vessel4,5. In many cases of trigeminal neuralgia, pharmacological treatment is sufficient for adequate control of symptoms. However, the majority of patients require more definitive surgical measures6. Both microvascular decompression (MVD) and ablative procedures (e.g., radiosurgery, percutaneous radiofrequency lesioning, balloon compression, or glycerol rhizolysis) have been shown to be effective at controlling trigeminal neuralgia symptoms acutely—however, MVD has been demonstrated to be superior in preventing long-term recurrence7.

Since the first reported uses of MVD by Janetta in the 1960s, adaptations to the procedure have improved patient outcomes. The use of intraoperative auditory brainstem evoked potentials, in particular, has lessened surgical morbidity by monitoring for early irritation of the brainstem and cranial nerves and assisting in prevention of damage to these structures8. Recent reports estimate positive outcome rates of MVD for trigeminal neuralgia in the ranges of 77-94%9,10,11. Nevertheless, significant postoperative complications, namely CSF leak, cerebellar damage and hearing loss9,10, still occur with the procedure. Additionally, recurrence of symptoms has been reported to occur in as many as 39% of patients10,11 following this procedure. In addition to being correlated with intraoperative variables such as nerve location, blood vessel, type and duration of symptoms6,7, the rate of recurrence also has been correlated with experience of the surgeon and hospital in performing MVD12. With proper technique, patient outcome can be maximized and adverse outcomes can be reduced.

This study examined the effectiveness of the surgical technique of MVD performed by two neurosurgeons at Vanderbilt University. The positive outcome rate we measured (93%) is at the high range of those generally reported in the literature9,10. While average duration of follow-up in this series is small, patients are routinely not seen in clinic following the 6-week visit if they remain pain-free and asymptomatic. Given that 64% of patients reported themselves to be entirely pain-free following the procedure, it is not surprising that the average duration of follow-up in this study is short. Present complication rates at our institution are comparable to those reported by others. Initially, MVDs were performed with a suboccipital craniectomy without replacement of the bone flap. After an internal review of the data, which demonstrated an elevated CSF leak of 25%, the protocol was changed to include buttressing with either a methylmethacrylate flap or replacement of the bone flap prior to wound closure. Since this time, our CSF leak rate has approximated 8%—consistent with other rates (2.4 – 12%) reported in the literature7,13. The percentage of our patients reporting hearing loss (3%) also approximates figures reported in the literature (0.8-2.8%)1,2,12,13, . In no instance did we have a patient with evidence cerebellar damage.

Our experience suggests that monitoring with BAERs and bone flap replacement are worthwhile options in microvascular decompression. The salient surgical principles and technical nuances utilized at Vanderbilt University have been presented in video format. Furthermore, this video journal format uniquely presents the vascular pathology that many physicians do not routinely see outside the operating room. The results presented suggest that microvascular decompression can be a highly effective procedure performed with low patient morbidity.

Dr. Peter Konrad and Dr. Joseph Neimat receive consulting fees and grant support from Medtronic, Inc. There is no associated conflict of interests with the data reported. 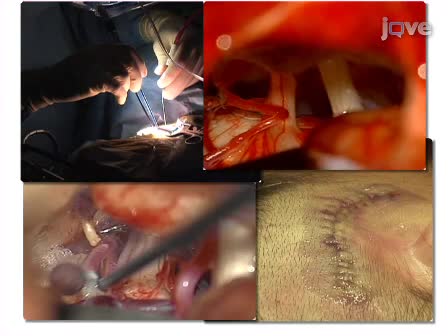