Normal brain function relies not only on embryonic development when major neuronal pathways are established, but also on postnatal development when neural circuits are matured and refined. Misregulation at this stage may lead to neurological and psychiatric disorders such as autism and schizophrenia1,2. Many genes have been studied in the prenatal brain and found crucial to many developmental processes3-5. However, their function in the postnatal brain is largely unknown, partly because their deletion in mice often leads to lethality during neonatal development, and partly because their requirement in early development hampers the postnatal analysis. To overcome these obstacles, floxed alleles of these genes are currently being generated in mice 6. When combined with transgenic alleles that express Cre recombinase in specific cell types, conditional deletion can be achieved to study gene function in the postnatal brain. However, this method requires additional alleles and extra time (3-6 months) to generate the mice with appropriate genotypes, thereby limiting the expansion of the genetic analysis to a large scale in the mouse brain.

Here we demonstrate a complementary approach that uses virally-expressed Cre to study these floxed alleles rapidly and systematically in postnatal brain development. By injecting recombinant adeno-associated viruses (rAAVs)7,8 encoding Cre into the neonatal brain, we are able to delete the gene of interest in different regions of the brain. By controlling the viral titer and coexpressing a fluorescent protein marker, we can simultaneously achieve mosaic gene inactivation and sparse neuronal labeling. This method bypasses the requirement of many genes in early development, and allows us to study their cell autonomous function in many critical processes in postnatal brain development, including axonal and dendritic growth, branching, and tiling, as well as synapse formation and refinement. This method has been used successfully in our own lab (unpublished results) and others8,9, and can be extended to other viruses, such as lentivirus 9, as well as to the expression of shRNA or dominant active proteins 10. Furthermore, by combining this technique with electrophysiology as well as recently-developed optical imaging tools 11, this method provides a new strategy to study how genetic pathways influence neural circuit development and function in mice and rats.

NOTE: handling of all viruses should be conducted in accordance with a biosafety protocol approved by your institution

NOTE: It is very important to make sure the pups are warm and exposed to home bedding prior to returning them to the mother and to return them as a group. Failure to do so may result in the mother injuring or killing the pups.

A successful injection procedure will produce robust infection of neurons in the region of the injection site with no observable tissue damage or other ill effects on the animal. As illustrated in Figure 1, the spread of the infection can be observed in Cre-reporter mice (ROSA26R)12 injected with rAAV8-Cre in various anatomical sites. Injections into specific regions, such as cortex and superior colliculus, typically generate local infections with minimal spread to adjacent regions (Fig. 1A-B). Use of high titer virus solution makes infection of adjacent areas, such as the hippocampus, more likely (Fig. 1A). Injection with low titer virus solution results in sparse infection, which typically remains near the injection site, as shown in the cerebellar injection of rAAV8-Cre at the midline of ROSA26R reporter mice (Figure 1C-D). We have observed recombination in ROSA26R reporter mice within 2 days after injection of rAAV8-Cre, suggesting that infection, recombination, and expression of reporter genes can all occur relatively rapidly. Additionally, we have successfully used this technique to study the effects of gene deletion at a non-ROSA locus using a floxed conditional allele, the results of which will be published elsewhere.

The number of cells infected should correlate with the titer of the injected viral solution. For example, injecting a mix of high titer solutions of two rAAV8 viruses expressing different fluorescent proteins into the cerebellum infects many Purkinje cells that are differentially labeled (Fig. 2A). Conversely, injecting a low titer virus solution can result in sparse infection to aid in visualizing single cells (Fig. 2B). Fluorescently labeled neurons can be observed directly in fresh cut, live tissue (Fig. 2B) or can be subjected to immunostaining to enhance the endogenous fluorescent signals for later image acquisition by wide-field or confocal fluorescent microscopy (Fig. 2A, Fig. 3A-C). Lastly, rAAV8 is capable of infecting a variety of neuron types in the cortex with strong labeling of fine processes (Fig. 3A-C). 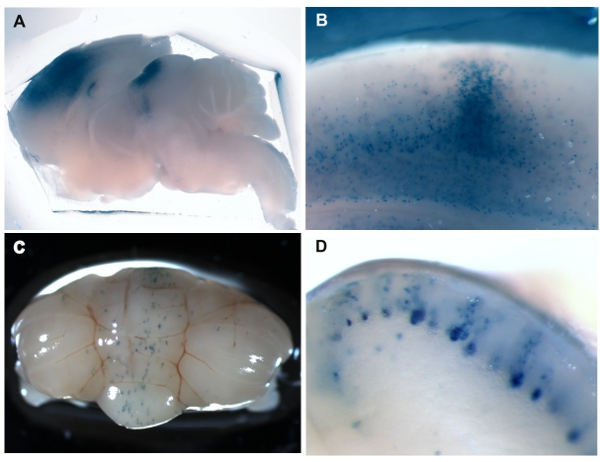 Figure 1: LacZ staining in the brain of ROSA26R reporter mice that were injected with rAAV8-Cre at P0 demonstrates Cre activity and the location of infection. 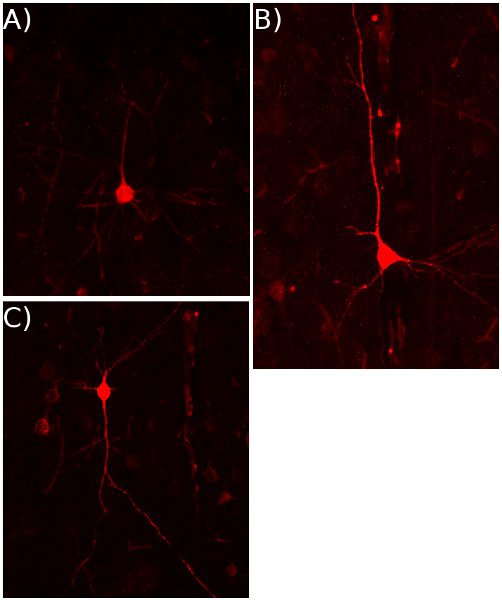 Figure 3: Cortical labeling by rAAV8-DsRed.
Examples of the variety of cortical neuron types in the coronal sections of a P21 cortex that was infected by rAAV8-DsRed at P0.

The neonatal viral injection method presented here provides a simple and rapid way to generate in vivo mosaics for the study of postnatal brain development. The method takes advantage of floxed alleles that are currently available as well as those that are being made through the High Throughput Gene Targeting project6. Compared to the use of transgenic expression of Cre, this method provides a rapid way to test gene function in various cell types, as mice carrying the floxed alleles can be used directly for experiments, and the entire virus injection procedure from start to finish can be accomplished in under an hour. In addition, the number of cells infected can be easily controlled by altering the titer of the virus, which allows sparse labeling of individual neurons. Although we only described the neuronal morphology in the sample images, the analysis of infected neurons can be expanded to many important developmental processes, including axonal and dendritic growth, branching and tiling, as well as synaptic development such as spine morphogenesis.

The three most critical parts of the procedure are the accuracy of targeting the injection site, the reliability of the injection equipment, and the survival of the pups. The first aspect – accuracy – is best learned through experience. The reliability of the injection equipment refers to the fact that one must make sure there are no clogs, leaks, or other problems with the equipment prior to injection. Lastly, survival of the pups is typically not a problem if the tips mentioned in Step 3.7 are followed.

An obvious modification of this procedure is to use a mixture of viruses expressing different genes. For example, a mixture of two viruses, rAAV-Cre-GFP and rAAV-RFP, can be injected to produce a mosaic of sparsely labeled knockout (green) and control (red) cells in a single animal. This provides a distinct advantage over traditional gene knockouts for the analysis of single cells, making it particularly useful for morphological analysis of neurons with wild type or mutant alleles in the same mouse brain. This can also be a limitation, however, if one wishes to perform behavioral studies, in which it may be necessary to manipulate a large number of neurons to produce an observable effect. We find that we can generally perform injections up to postnatal age 3 (P3), however from age P4 and on the skull is often too thick to easily puncture with the injection needle. The thickness of the skull at a particular age can vary from animal to animal, however, so this issue must be assessed by the experimenter.

In addition to using fluorescent proteins expressed from the Cre-expressing virus, many fluorescent reporter mice with the loxP-STOP-loxP alleles have been generated13 and can be incorporated with the floxed allele. Although including the new allele adds the time needed for obtaining the mice with appropriate genotypes, these reporter mice can simultaneously monitor Cre activity and label individual neurons.

Because of the selective tropism of recombinant rAAVs, different neuronal cell types can be labeled in anatomical regions by choosing a particular rAAV serotype (Figure 1D). The specificity can be also achieved by using different promoters. In addition, other viruses, such as lentivirus, can be used to infect neurons10. The advantage here is that these viruses can carry larger DNA inserts to express not only Cre but also other genetic materials, such as shRNA and dominant active genes. Furthermore, the method can be also used in the newly developed transgenic rats14, where conditionally expressed Cre lines are not well established. Finally, once this technique is established in the lab, it can be further combined with other analytical tools, such as in vivo two-photon imaging11 and/or electrophysiology, to study the function of each gene in neural circuit development and function.

This work is supported by an RO1 grant from NIH (NINDS). 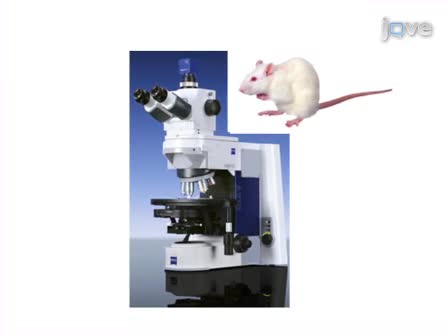