Live Gram-negative and Gram-positive bacteria can be immobilized on gelatin-coated mica and imaged in liquid using Atomic Force Microscopy (AFM).

AFM is a high-resolution (nm scale) imaging tool that mechanically probes a surface. It has the ability to image cells and biomolecules, in a liquid environment, without the need to chemically treat the sample. In order to accomplish this goal, the sample must sufficiently adhere to the mounting surface to prevent removal by forces exerted by the scanning AFM cantilever tip. In many instances, successful imaging depends on immobilization of the sample to the mounting surface. Optimally, immobilization should be minimally invasive to the sample such that metabolic processes and functional attributes are not compromised. By coating freshly cleaved mica surfaces with porcine (pig) gelatin, negatively charged bacteria can be immobilized on the surface and imaged in liquid by AFM. Immobilization of bacterial cells on gelatin-coated mica is most likely due to electrostatic interaction between the negatively charged bacteria and the positively charged gelatin. Several factors can interfere with bacterial immobilization, including chemical constituents of the liquid in which the bacteria are suspended, the incubation time of the bacteria on the gelatin coated mica, surface characteristics of the bacterial strain and the medium in which the bacteria are imaged. Overall, the use of gelatin-coated mica is found to be generally applicable for imaging microbial cells.

Figure 2 shows example images of bacterial cells that have been mounted on gelatin-coated mica and imaged by AFM. In our laboratories, samples are typically imaged using a PicoPlus atomic force microscope (Agilent Technologies, Temple, AZ) outfitted with a 100 μm scanning head. The instrument is operated at 128-512 pixels per line scan at a scan speed of 0.5-1.0 lines/s. The cantilevers that are typically used are Veeco silicon nitride probes (MLCT-AUHW, Veeco, Santa Barbara, CA) with nominal spring constants ranging from 0.01 to 0.1 nN/nm. 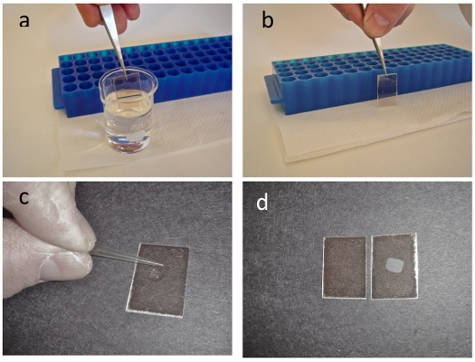 Figure 1. Gelatin at a temperature of 60-70 °C is placed in a 20 ml beaker. Using a pair of tweezers freshly cleaved mica squares are totally immersed into the gelatin (a) withdrawn and placed upright on a paper towel leaning against a micro centrifuge rack (b). A droplet of bacterial sample is placed on the mica and spread with a pipet tip in both the X and Y directions (c). After allowing the sample to incubate on the mica surface for at least 10 minutes, rinse the sample in a stream of distilled water. If the immobilization worked you will be able to see an opaque spot on the mica as shown in the right panel of (d). If the immobilization did not work you will get a clear piece of mica as in the left panel. The opaque spot on the mica scales to the concentration of the bacteria in the droplet that you place on the gelatin treated mica. 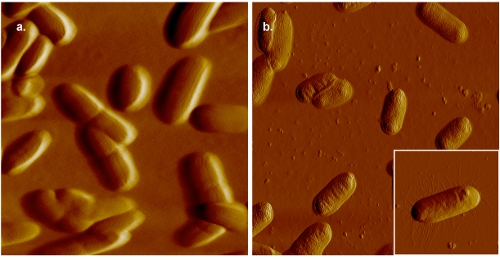 Figure 2. AFM images of E. coli. In panel (a), the cells are mounted on gelatin-coated mica and imaged in 0.005 M PBS. For comparison, an image of bacterial cells mounted on gelatin-coated mica and imaged in air is shown in panel (b). Though septa are clearly visible in image collected in liquid, greater resolution, as indicated by the presence of pili (inset panel (b)), can be obtained in air.

Various factors can affect microbial cell mounting and imaging by AFM. The gelatin that is used for coating the mica is important. Commercial gelatin is isolated from a number of vertebrates including fish, cows, and pigs. Both the origin and the processing method determine the gelatin's suitability for bacterial immobilization. Numerous sources and types of gelatin were evaluated for their effectiveness in immobilizing bacteria [1]. The two most effective gelatins were found to be Sigma G-6144 and G-2625. Derived from pigs (porcine), these gelatins are considered to be low Bloom and medium Bloom, respectively. It is important to test for compatibility between the gelatin-treated substrate and the particular strain of bacteria to be studied. Importantly, gelatin derived from cattle (bovine) has not been effective in immobilizing any of the tested bacteria. A simple test for cell immobilization involves allowing the sample to dry on the mica, after rinsing with water or buffer (after step 4.6). If the bacteria are immobilized, a cloudy area will be observed (Fig 1d). If the surface is not cloudy, the stream of rinse water has removed the bacteria. When performing this test, the user should be cautious of the effects of additives, such as salts, that can also lead to a cloudy appearance.

The gelatin-coated mica immobilization technique has successfully been applied to Gram-negative and Gram-positive bacteria (1), bacterial spheroplasts (2), virus particles (3) and diatom shells (4). Immobilization with gelatin has the advantage of dispersing cells on the substrate, which allows for images of an individual bacterium to be taken. Also the method ensures that an ample number of cells are available in each field, which reduces the time spent searching for cells. The technique has also been used for collection of force measurements on the cell surfaces of both E. coli (5) and Pseudomonas aeruginosa (6). Characteristics of different bacterial strains can affect immobilization. For example, whereas the wild-type of E. coli (DH5α) are stably immobilized in liquid using substrates coated with gelatin G-6144, a strain deficient in the outer membrane lipoprotein, NlpI did not immobilize well and instead required a high Bloom gelatin (Sigma G-2500).

Contents of the bacterial solution can also affect cell immobilization. Growth media, certain buffers, and salts may interfere with bacterial binding (they compete with the bacteria for the gelatin surface) and will have to be tested. Ultimately, successful imaging of bacteria in liquid by AFM depends on optimizing the immobilization (for cell number), selecting the optimal liquid for applying the bacteria to the mica surface and imaging in a liquid medium compatible with your designed experiment. For example, a dilute buffer has been successfully used where E. coli was immobilized on gelatin-coated mica in 0.01M phosphate buffered saline (PBS), rinsed with the same buffer to remove loosely bound cells, and subsequently imaged in 0.005M PBS (Fig. 2). For cells that are osmotically sensitive, sucrose, up to 0.25 M, has been used successfully for mounting and imaging bacteria [2-6]. The imaging mode is another factor that should be considered when trying to image weakly bound bacteria in liquids. Contact mode imaging can displace loosely bound bacteria. The noncontact imaging modes, Tapping Mode and MAC Mode, reduce the lateral forces exerted by the probe tip and therefore may be preferred.

Imaging living bacterial samples in liquid offers the opportunity to get representative images of the cell surface without the compromising effects of drying. Accurate measures of surface characteristics, height, and rigidity of a living cell can be collected. In like fashion, specific probe molecules attached to the cantilever can be used to identify interactions, map location, and measure binding forces to specific targets on the cell surface [7]. Immobilization of bacteria in a liquid environment facilitates dynamic studies of living bacterial cells. This might include studies of bacterial growth and division, the effect of adding molecular species to the imaging medium, and changing physical properties of the environment such as temperature or pressure. Overall, having the option to study bacteria in liquids, at high resolution, fuels the imagination with future research possibilities.

This research is sponsored by the Office of Biological and Environmental Research, U.S. Department of Energy and by grant funding from Virginia's Commonwealth Health Research Board. Oak Ridge National Laboratory is managed by UT-Battelle, LLC, for the U. S. Department of Energy under Contract No. DE-AC05-00OR22725. 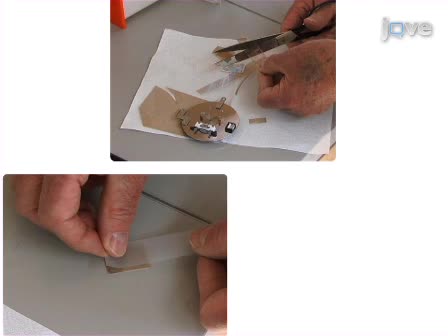