Chromatin structure is important for the regulation of gene expression in eukaryotes. In this process, chromatin remodeling, DNA methylation, and covalent modifications on the amino-terminal tails of histones H3 and H4 play essential roles1-2. H3 and H4 histone modifications include methylation of lysine and arginine, acetylation of lysine, and phosphorylation of serine residues1-2. These modifications are associated either with gene activation, repression, or a primed state of gene that supports more rapid and robust activation of expression after perception of appropriate signals (microbe-associated molecular patterns, light, hormones, etc.)3-7.

Here, we present a method for the reliable and sensitive detection of specific chromatin modifications on selected plant genes. The technique is based on the crosslinking of (modified) histones and DNA with formaldehyde8,9, extraction and sonication of chromatin, chromatin immunoprecipitation (ChIP) with modification-specific antibodies9,10, de-crosslinking of histone-DNA complexes, and gene-specific real-time quantitative PCR. The approach has proven useful for detecting specific histone modifications associated with C4 photosynthesis in maize5,11 and systemic immunity in Arabidopsis3.

For sonication with a Bandelin brand sonotrode expose chromatin in 0.6mL microfuge tube five times to 20 bursts with settings 25% power, cycle = 50. While doing so, cool sample after every 20th bursts in an ice bath.

For sonication with a Diagenode Bioruptor ultrasonic bath, fill bath with water and ice and sonicate ten times for 30 seconds in 1.5mL microfuge tubes with setting 'high'. After every 30 seconds, cool samples for another 30 seconds.

4. De-crosslinking of histones and DNA, and purification of precipitated DNA

Expression of the Arabidopsis thaliana PR2 defense gene encoding a β-1,3-glucanase with antimicrobial activity12, was induced by benzothiadiazole (BTH), a synthetic analog of the plant hormone salicylic acid3. Figure 1 demonstrates that activation of PR2 expression is associated with an increase in the acetylation of lysine residues on histone H3 and H4 on the PR2 promoter. Since nucleosome density decreases during gene activation13, histone acetylation values were normalized for the signal obtained with an antibody to an invariant region of histone 3. 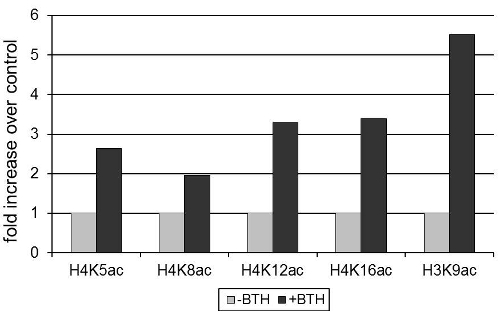 Figure 1 BTH induces histone acetylation on the PR2 promoter in Arabidopsis. Plants were treated with 100μM BTH or a wettable powder control. After 72h, leaves were collected and chromatin was isolated. The signal obtained after precipitation with acetylation-specific antibodies (as indicated in the figure) was normalized to the signal obtained by precipitation with an antibody to an invariant domain of histone H3. Precipitated chromatin was quantified by RT-qPCR. Data are standardized for histone modification levels in the absence of BTH treatment.

Most critical steps in the protocol are the crosslinking of DNA and histones, the type and amount of leaf material, grinding of the material, and the sonication of chromatin. For a more detailed discussion of these issues, see refs. 9 and 10.

It is important to disrupt chromatin during sonication to fragments of about 400bp. Exhaustive sonication will destroy chromatin by disrupting DNA and histones, whereas insufficient sonication will leave long chromatin fragments. These affect the specificity of the method, because histone modifications distal from the tested locus cannot be discriminated from local modifications. Sonication efficiency is best tested by collecting 20μL chromatin from samples before and after sonication, de-crosslinking DNA and histones, isolating the DNA and determining the length of the sheared DNA by agarose gel electrophoresis. RNAse should be added to the samples before electrophoresis, because the chromatin preparation still contains large amounts of RNA at this stage of purification that might interfere with the visualization of fragmented DNA. The samples are useful for chromatin immunoprecipitation if DNA from non-sheared chromatin is longer than 10kbp, whereas DNA from sheared chromatin forms a smear with maximum signal intensity around 400bp of DNA.

Amount of plant material and grinding:

It is important to infiltrate low amounts of leaf material in a large volume of buffer to avoid leaves sticking to each other. Leaf sticking often results in insufficient infiltration of formaldehyde. Furthermore, too much plant material will block pores of the miracloth tissue. The grinding efficiency considerably depends on using a mortar and pestle with the perfect fit. We routinely grind with a liquid nitrogen-cooled pestle and mortar in the absence of additional liquid nitrogen three times for 50 seconds until the material is ground to a fine powder.

This work was funded by the German Science Foundation (DFG) and the Excellence Initiative of the German federal and state governments. 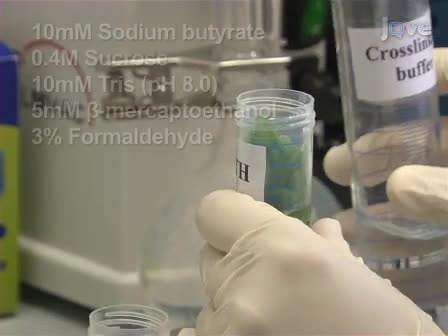