This video demonstrates the surgical preparation and procedures needed to study the contractile responses of the rat medial gastrocnemius muscle preparation in situ. This preparation allows measurement of skeletal muscle contractile properties under physiological conditions. The animal is anesthetized and the muscle is separated from surrounding tissue at its distal end. The Achilles tendon is attached to a force transducer, allowing measurement of the muscle’s contractile response at 37 degrees C with an intact circulation.

There are many circumstances where it is desirable to obtain the contractile response of skeletal muscle under physiological circumstances: normal circulation, intact whole muscle, at body temperature. This includes the study of contractile responses like posttetanic potentiation, staircase and fatigue. Furthermore, the consequences of disease, disuse, injury, training and drug treatment can be of interest. This video demonstrates appropriate procedures to set up and use this valuable muscle preparation.

To set up this preparation, the animal must be anesthetized, and the medial gastrocnemius muscle is surgically isolated, with the origin intact. Care must be taken to maintain the blood and nerve supplies. A long section of the sciatic nerve is cleared of connective tissue, and severed proximally. All branches of the distal stump that do not innervate the medial gastrocnemius muscle are severed. The distal nerve stump is inserted into a cuff lined with stainless steel stimulating wires. The calcaneus is severed, leaving a small piece of bone still attached to the Achilles tendon. Sonometric crystals and/or electrodes for electromyography can be inserted. Immobilization by metal probes in the femur and tibia prevents movement of the muscle origin. The Achilles tendon is attached to the force transducer and the loosened skin is pulled up at the sides to form a container that is filled with warmed paraffin oil. The oil distributes heat evenly and minimizes evaporative heat loss. A heat lamp is directed on the muscle, and the muscle and rat are allowed to warm up to 37°C. While it is warming, maximal voltage and optimal length can be determined. These are important initial conditions for any experiment on intact whole muscle. The experiment may include determination of standard contractile properties, like the force-frequency relationship, force-length relationship, and force-velocity relationship.

With care in surgical isolation, immobilization of the origin of the muscle and alignment of the muscle-tendon unit with the force transducer, and proper data analysis, high quality measurements can be obtained with this muscle preparation.

For the rat medial gastrocnemius muscle, the half-maximal frequency of stimulation is typically 50-60 Hz in non-fatigued muscle2. Results will fit closely to the line described by the equation above. 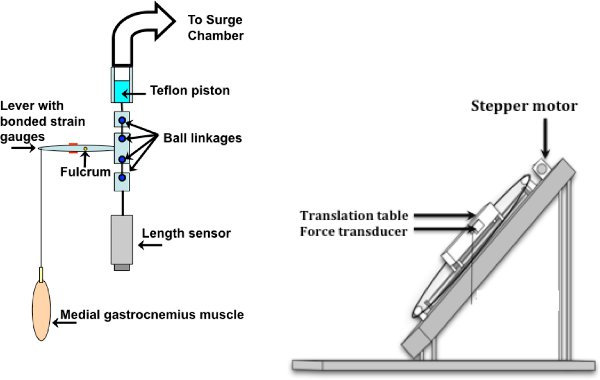 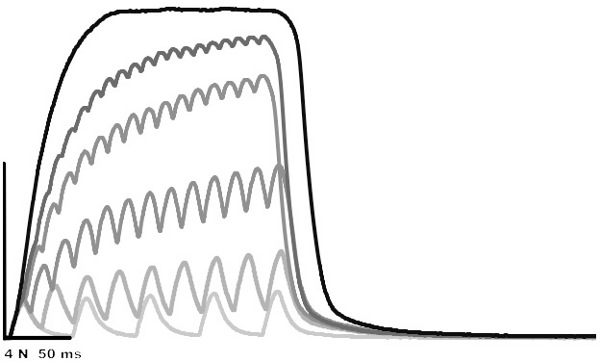 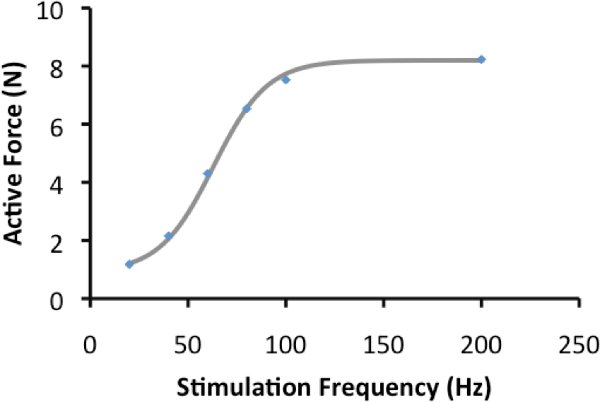 Figure 3. Force-frequency relationship: Active force of contractions in figure 2 are plotted and the line represents the line of best fit.

Good quality contractile results can be obtained with care in surgical preparation, secure mounting in the apparatus and good quality electronics. When a student is learning this surgery, some common slips include: stretching the sciatic nerve, disrupting the blood flow, and excessive bleeding. The nerve must be handled with care to prevent damage. You will know you have damaged the nerve if the maximal tetanic force at optimal length is substantially less than that shown in Figure 3, or if the stimulation voltage needed to maximally activate all motor units is greater than 5 volts. It is relatively easy to avoid the blood vessels serving this muscle during the surgery. Disruption to these vessels can occur when the drill bit is being placed in the caudal surface of the femur. If the pilot hole is not on the flat surface of the femur, the drill may slip. When this happens, there is a possibility that the popliteal vessels get disrupted. If blood pools around the muscle after set-up, it is a sign that you have disrupted these vessels. Excessive bleeding can also occur if a large vein is cut and not tied. Large veins to watch out for are the ones around the ankle.

There are two approaches that have been used to avoid synchronous activation. One is to use an electrode cuff with several pairs of stimulating wires. This allows activation of a portion of the motor units with each pair, and stimulation can rotate through the pairs to achieve asynchronous activation. This method of activation can be combined with anodal block11to attempt to activate motor units in the appropriate sequence according to the size principle12. In this approach, all motor units are activated with a proximal pair of electrodes, and a block is imposed with direct current stimulation. The amplitude of stimulus for the block can be modulated to inhibit motor units for which activation is not desired. Apparently the block affects large axons at the lowest voltage, and progressively affects smaller units.

The in situ rat gastrocnemius muscle preparation is a valuable physiological approach to the study of skeletal muscle contraction and biochemical properties in health and in disease.

Research supported by the Natural Science and Engineering Research Council of Canada. 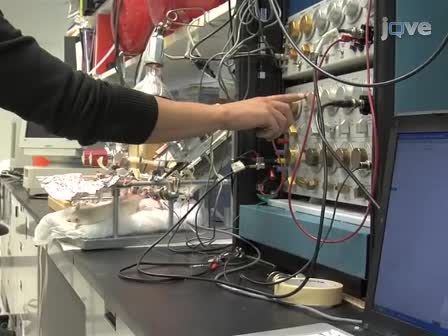