As with standard plasmid vectors, it is possible to transfect lentivectors in plasmid form into cells with low-to-medium efficiency to obtain transient expression of effectors. Packaging lentiviral expression constructs into pseudoviral particles, however, enables up to 100% transduction, even with difficult-to-transfect cells, such as primary, stem, and differentiated cells. Moreover, the lentiviral delivery does not produce the specific cellular responses typically associated with chemical transfections, such as cell death resulting from toxicity of the transfection reagent 1, 2. When transduced into target cells, the lentiviral construct integrates into genomic DNA and provides stable expression of the small hairpin RNA (shRNA), cDNA, microRNA or reporter gene 3, 4. Target cells stably expressing the effector molecule can be isolated using a selectable marker contained in the expression vector construct such as puromycin or GFP. After pseudoviral particles infect target cells, they cannot replicate within target cells because the viral structural genes are absent and the long terminal repeats (LTRs) are designed to be self-inactivating upon transduction 5, 6.

There are three main components necessary for efficient lentiviral packaging 1, 5, 6, 7.
1. The lentiviral expression vector that contains some of the genetic elements required for packaging, stable integration of the viral expression construct into genomic DNA, and expression of the effector or reporter.
2. The lentiviral packaging plasmids that provide the proteins essential for transcription and packaging of an RNA copy of the expression construct into recombinant pseudoviral particles. This protocol uses the pPACK plasmids (SBI) that encode for gag, pol, and rev from the HIV or FIV genome and Vesicular Stomatitis Virus g protein (VSV-G) for the viral coat protein.
3. 293TN producer cells (derived from HEK293 cells) that express the SV40 large T antigen, which is required for high-titer lentiviral production and a neomycin resistance gene, useful for reselecting the cells for maintenance.

An overview of the viral production protocol can be seen in Figure 1. Viral production starts by co-transfecting 293TN producer cells with the lentiviral expression vector and the packaging plasmids. Viral particles are secreted into the media. After 48-72 hours the cell culture media is harvested. Cellular debris is removed from the cell culture media, and the viral particles are precipitated by centrifugation with PEG-it for concentration. Produced lentiviral particles are then titered and can be used to transduce target cells. Details of viral titering are not included in this protocol, but can be found at:

This protocol has been optimized using the specific products indicated. Other reagents may be substituted, but the same results cannot be guaranteed.

1. Transfection of 293TN Cells with Packaging Plasmids and the Expression Construct

2. Concentration of the Viral Supernatant

293TN cells may pull off the tissue culture plates 48-72 hours after transfection. This does not negatively affect the production of lentiviral particles.

Viral titers can be calculated using SBI's Global UltraRapid Titering kit according to the manufacturer's instructions. This system utilizes qPCR to measure viral integration of the WPRE sequence from the lentiviral vector into HT1080 cells and compares this to a standard curve, based on a genomic reference sequence to accurately measure infectious units per ml (Figure 4).

If using lentiviral particles expressing a constitutively active GFP marker, GFP positive cells should start to appear within 12-24 hours of transduction, if the transduction reaction is working. GFP expression should continue after the lentiviral construct stably integrates into the host cell genome. If transducing with different MOIs, the GFP fluorescence should approximately match the MOI, where low MOIs show less GFP fluorescence and higher MOIs show increased GFP fluorescence (Figure 5).

Figure 1. Overview of the viral production protocol. The lentivector and pPACK packaging plasmids are mixed and co-transfected into 293TN cells. After 48 -72 hours, the viral supernatant is collected, and viral particles are precipitated with PEG-it. After titering the lentiviral particles, they can be used to transduce the target cells-of-interest. Click here to view larger figure. 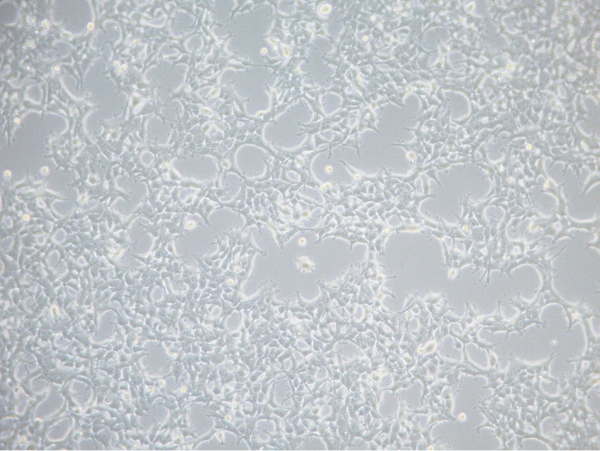 Figure 2. Phase contrast image of 293TN cells. Cell density should be between 60-80% confluent the day of transfection. 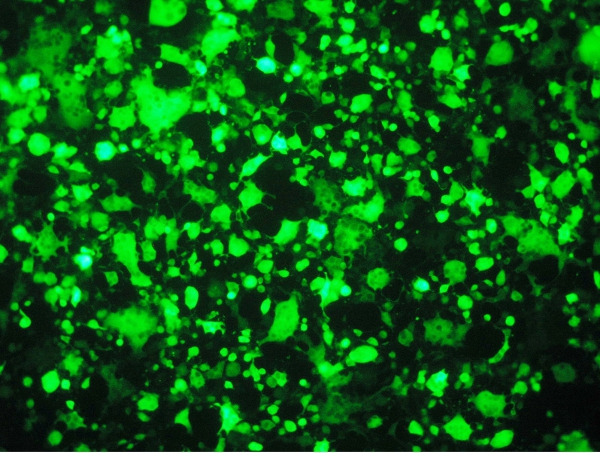 Successful viral packaging is dependent upon several key steps. The 293TN cells express the SV40 large T antigen, which is absolutely necessary for secretion of the lentiviral particles into the cell culture supernatant. The density at which the 293TN cells are at the time of transfection is especially important in order for the PureFection reagent to sufficiently transfer the lentivector and packaging plasmids into the cells. Adding the PureFection mixture to the tissue culture plate in a drop-wise manner followed by thoroughly swirling the plate is important for dispersal of the packaging plasmids and lentivector construct throughout all of the cells. Failure to appropriately distribute the vectors may result in insufficient lentiviral particles being produced. The viral packaging reaction can be scaled up for production of high titer virus, based on the surface area of the tissue culture plates. One can choose to plate several tissue culture dishes of 293TN cells per construct that needs to be packaged. Concentration of the viral supernatants is especially helpful in creating high-titer virus. Viral supernatant from multiple plates of cells can be combined and concentrated for use in in vivo experiments, or for cells that are difficult to transduce.

Titering the produced lentiviral particles is important for calculating an accurate MOI to use for transduction of target cells. Knowing the MOI that was used in a given transduction enables troubleshooting in the event that the transduction is not successful. For example, using an MOI that is too low may result in very few target cells expressing the construct-of-interest. Using an MOI that is too high, however, may result in target cells that show signs of stress. The goal is to use an MOI that maximizes expression of the construct-of-interest while preserving the health of the cells. While we recommend a qPCR-based titering protocol that measures integrated copies of the lentiviral construct in HT1080 cells, other titering approaches can also be used, such as p24 ELISA or estimation of the percent of GFP-positive cells.

Efficient viral packaging is also dependent upon the size of the lentiviral construct, between the 5' and 3'LTR regions. This section of the lentiviral construct should be approximately 9 kb or less, which corresponds to the size of the native HIV genome. Exceeding 9 kb may decrease the titer of the produced pseudoviral particles. New technology, such as piggyBac transposon vectors, allow for reliable, stable integration of transgenes up to 100 kb through a single transfection. This approach may be used for constructs that exceed the size limit for lentiviral vectors, in cases where it is possible to transfect target cells, and provides the additional advantage of not requiring a viral packaging step 9,10.

The pseudoviral particles produced using this protocol are infectious in that they can infect most mammalian cell types. The products used in this protocol, however are third-generation biosafe in that they produce non-replicative and self-inactivating pseudoviruses. Therefore, once transduced into target cells or animals, the target cells or animals are not infectious or contagious. Substitution of other lentivector plasmids that are not third-generation biosafe is possible although not recommended from a biosafety perspective. The viral production protocol and subsequent transduction of target cells should be carried out under Biosafety Level 2, according to the NIH guidelines 11, and researchers should always wear a lab coat and gloves when handling the viral particles. Used 293TN producer cells, tubes of viral particles, and disposable pipettes should be disposed of in an appropriate biohazard container. Reusable pipettes and glassware should be decontaminated with bleach and autoclaving to decrease exposure of personnel.

Production and Free Access to this video article is sponsored by System Biosciences.

We would like to acknowledge the staff and scientists at SBI for their support in the development and testing of these protocols. 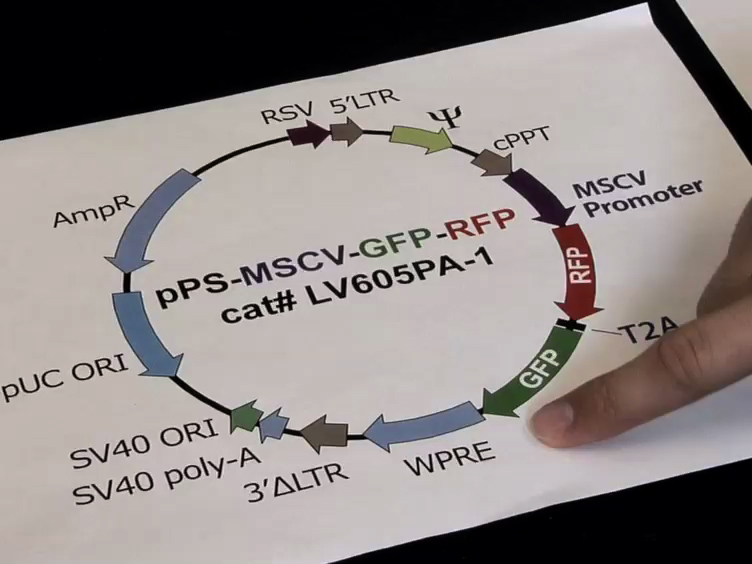