A method for estimating the affinity constant of an agonist for the active state (Kb) of a G protein-coupled receptor is described. The analysis provides absolute or relative measures of Kb depending on whether constitutive receptor activation is measurable. Our method applies to various responses downstream from receptor activation.

When an agonist activates a population of G protein-coupled receptors (GPCRs), it elicits a signaling pathway that culminates in the response of the cell or tissue. This process can be analyzed at the level of a single receptor, a population of receptors, or a downstream response. Here we describe how to analyze the downstream response to obtain an estimate of the agonist affinity constant for the active state of single receptors.

Methods for analyzing the downstream responses of GPCRs have been developed that enable the estimation of the Kobs and relative efficacy of an agonist 1,2. In this report, we show how to modify this analysis to estimate the agonist Kb value relative to that of another agonist. For assays that exhibit constitutive activity, we show how to estimate Kb in absolute units of M-1.

Our method of analyzing agonist concentration-response curves 3,4 consists of global nonlinear regression using the operational model 5. We describe a procedure using the software application, Prism (GraphPad Software, Inc., San Diego, CA). The analysis yields an estimate of the product of Kobs and a parameter proportional to efficacy (τ). The estimate of τKobs of one agonist, divided by that of another, is a relative measure of Kb (RAi) 6. For any receptor exhibiting constitutive activity, it is possible to estimate a parameter proportional to the efficacy of the free receptor complex (τsys). In this case, the Kb value of an agonist is equivalent to τKobs/τsys 3.

Our method is useful for determining the selectivity of an agonist for receptor subtypes and for quantifying agonist-receptor signaling through different G proteins.

Figure 6 shows the results of experiments on muscarinic agonist-stimulated phosphoinositide hydrolysis in HEK 293 cells stably expressing Gα15 3. Transient expression of the M3 muscarinic receptor caused an increase in basal phosphoinositide hydrolysis, which was attributed to constitutive receptor activity. The data were analyzed to estimate the log Kb values of oxotremorine-M and McN-A-343 as described under Section 6. This analysis yielded log Kb values of 8.30 ± 0.59 and 6.59 ± 0.77 for oxotremorine-M and McN-A-343, respectively. The theoretical curves represent the least-squares fit of the regression equation to the data (see Section 6.2). The estimates of log τsys, Msys and M were -2.29 ± 0.59, 95.8 ± 2.8 and 0.72 ± 0.08, respectively. The estimate of the Kobs value of McN-A-343 was 5.35 ± 0.46. 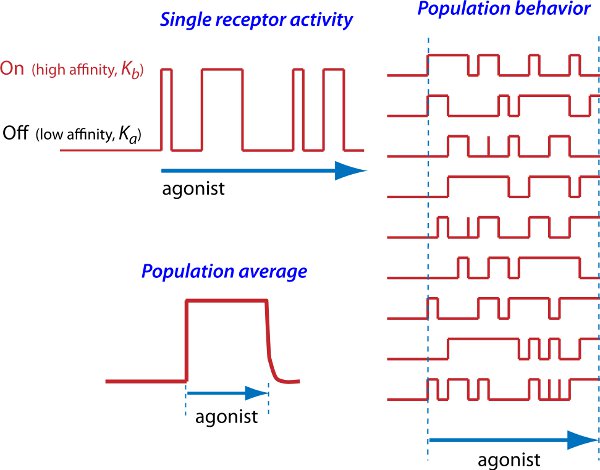 Figure 1. Relationship between single receptor activity and the average level of activation of the receptor population. Single receptor activity, the theoretical behavior of a single receptor undergoing transitions between active (On) and inactive (Off) states in the presence of an agonist is shown. The affinity constants of the agonist for the active and inactive states are denoted by Kb and Ka, respectively. Population behavior, the theoretical behavior of several receptors undergoing random transitions between active and inactive states in the presence of an agonist is shown. Population average, the average level of receptor activation in a population of receptors in the presence of a specific concentration of agonist is shown. The activation level of the receptor population is known as the stimulus. 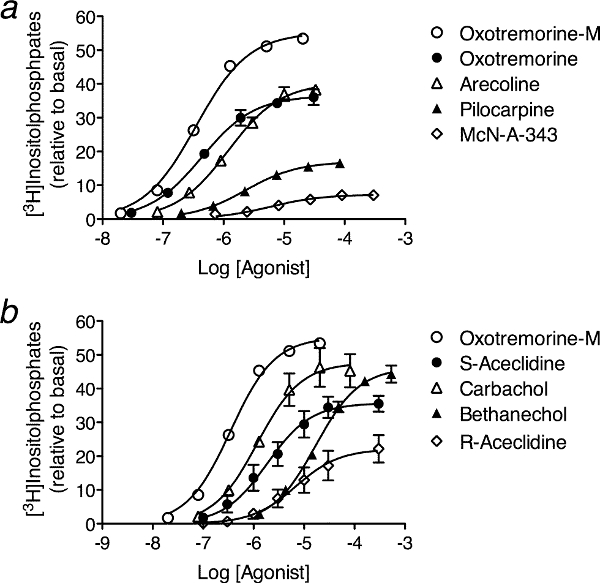 Figure 4. Examples of concentration-response curves for stimulation of [3H]inositolphosphate accumulation by various muscarinic agonists in HEK 293 cells expressing the human M2 muscarinic receptor and Gα15. Expression of the M2 receptor caused a 30 - 35% [3H]inositolphosphate response, which was attributed to constitutive receptor activity. The data are from Ehlert et al. 12. 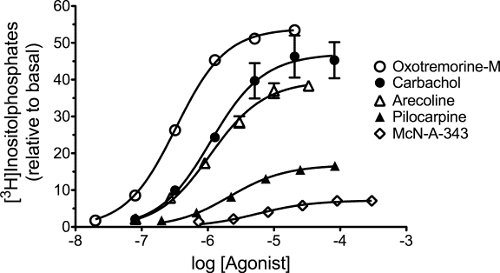 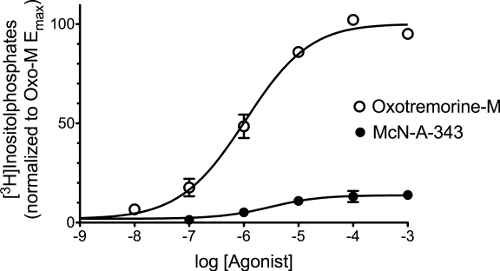 Because our method for estimating RAi (relative Kb value) only requires the measurement of agonist concentration-response curves, our analysis can be done anytime these curves are measured.

The accuracy of estimating Kb depends on an accurate estimation of constitutive receptor activity. In our case, transfection of the M3 receptor in HEK 293 cells caused an increase in phosphoinositide hydrolysis that ranged from about 500 - 1,000 cpm of [3H]inositolphosphates measured in the presence of lithium in cells pre-labeled with [3H]inositol. The maximal response to carbachol was approximately 50,000 - 60,000 cpm. Had the constitutive response been larger and less variable, our estimate of the Kb values of the oxotremorine-M and McN-A-343 would have been more accurate. The estimate of Kb also depends on having an accurate estimate of the transducer slope factor (M) in the operational model. Consequently, more accuracy could have been achieved if the concentrations of agonist were more closely spaced as recommended under section 1.3. Running additional agonists in the experiment also greatly increases the accuracy of the estimate of M, and hence, of Kb.

If there are different active states of the receptor that signal through different coupling proteins (e.g., G proteins), then our method of analysis provides an accurate estimation of agonist Kb and RAi values for each effector pathway 3,6. If more than one active state contributes to a single measured response, then our method of estimation of RAi and Kb represents a weighted average of different active states depending upon their relative abundance and activity 3.

Constitutive receptor activity can be induced by over expressing the GPCR and its complementary G protein 13. This may change the observed affinity and efficacy of the agonist-receptor complex and may cause non-physiological signaling. But changes in the nature of the response and the observed affinity and efficacy of the receptor population do not imply changes in the fundamental quantal states of the receptor, only a change in their number and probability of isomerization. Thus, G proteins are not so much a determinant of drug effects so much as a window onto different effector-selective states of the receptor. If our method of analysis is applied to specific GPCR signaling assays involving a single effector (e.g., G protein) it should be possible to measure agonist Kb values for effector-selective states of the receptor - the ultimate measure of agonist bias.

This work was supported by a National Institutes of Health Grant GM 69829. 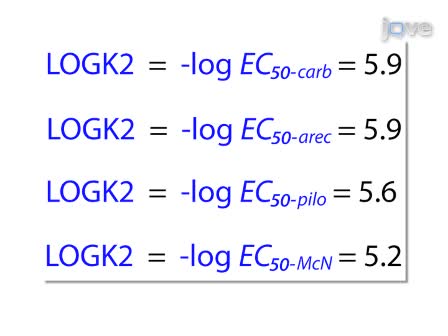