This protocol describes how to quantify the Mg(II)-dependent formation of RNA tertiary structure by two methods of hydroxyl radical footprinting.

RNA molecules play an essential role in biology. In addition to transmitting genetic information, RNA can fold into unique tertiary structures fulfilling a specific biologic role as regulator, binder or catalyst. Information about tertiary contact formation is essential to understand the function of RNA molecules. Hydroxyl radicals (•OH) are unique probes of the structure of nucleic acids due to their high reactivity and small size.1 When used as a footprinting probe, hydroxyl radicals map the solvent accessible surface of the phosphodiester backbone of DNA1 and RNA2 with as fine as single nucleotide resolution. Hydroxyl radical footprinting can be used to identify the nucleotides within an intermolecular contact surface, e.g. in DNA-protein1 and RNA-protein complexes. Equilibrium3 and kinetic4 transitions can be determined by conducting hydroxyl radical footprinting as a function of a solution variable or time, respectively. A key feature of footprinting is that limited exposure to the probe (e.g., 'single-hit kinetics') results in the uniform sampling of each nucleotide of the polymer.5

In this video article, we use the P4-P6 domain of the Tetrahymena ribozyme to illustrate RNA sample preparation and the determination of a Mg(II)-mediated folding isotherms. We describe the use of the well known hydroxyl radical footprinting protocol that requires H2O2 (we call this the 'peroxidative' protocol) and a valuable, but not widely known, alternative that uses naturally dissolved O2 (we call this the 'oxidative' protocol). An overview of the data reduction, transformation and analysis procedures is presented.

Figure 3 shows representative results from P4-P6 RNA •OH footprinting experiments. The gel image (left) indicates that a) background cleavage is minimal (right lane), b) single nucleotide assignment is possible due to well defined bands in the T1 lane (RNase T1 cleaves at each G), and c) the hydroxyl radical induced fragmentation of RNA is well above background. The transition from low to high Mg(II) is affiliated with decreasing integrated band density of individual and groups of bands indicating formation of RNA tertiary structure. Single or groups of contiguous nucleotide whose cleavage changes concomitantly are referred to as a 'protection'. The •OH protections characteristic of the Mg(II) mediated folding of the P4-P6 RNA closely correspond to the solvent inaccessible regions of the molecule observed in its crystal structure.15

Folded RNA molecules can have very different extents (i.e., how close to background the band densities decline) of tertiary contact protection that have not been correlated with clear structural or dynamic phenomenon. Thus, some RNA molecules will show well defined structural transitions, as shown in Fig 3, and some will not. Band intensities are quantified and normalized by SAFA12 analysis (Figure 3B). The output is a 'thermal' plot visualizing the relative degree of protection against •OH. The color transition describes the accessibility change upon Mg(II) addition. White to red or blue shows more accessible or more protected nucleotides, respectively. Each degree of shading is affiliated with a numerical value which can be plotted as a protection curve (Figure 3C) and analyzed by a binding model such as the Hill equation (1). The equilibrium dissociation constant affiliated with Protection 153-155 is roughly twice that of the corresponding value of Protection 163-164. 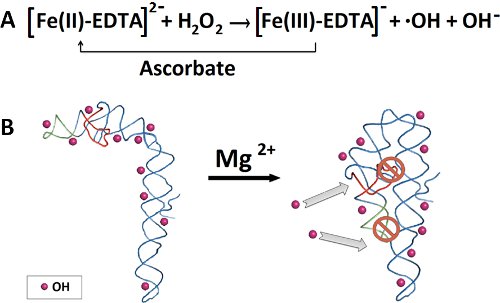 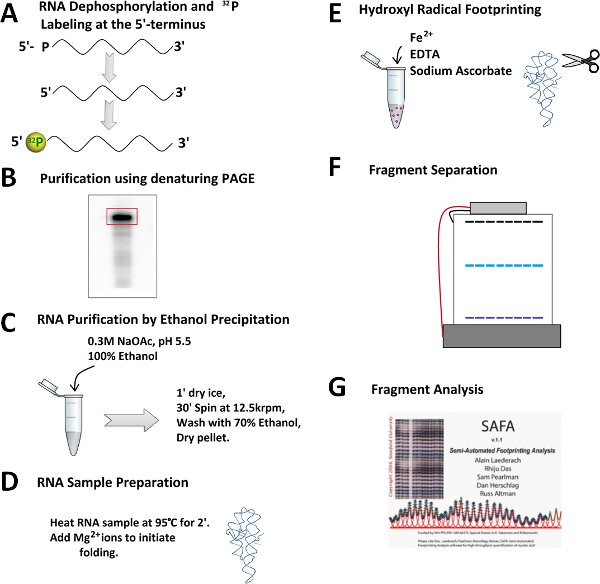 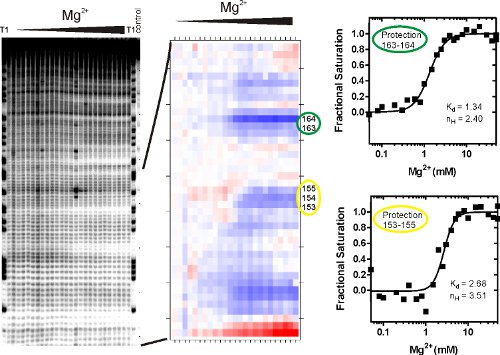 Figure 3. Analysis of RNA fragments after peroxidative Fenton footprinting reaction. (A) The RNA was exposed to hydroxyl radicals and the cleavage products were resolved using denaturing polyacrylamide gel electrophoresis (PAGE). The picture shows peroxidative cleavage products with increasing concentration of Mg(II). Reference and control lanes are labeled. This image file is the input for the SAFA program which quantitates the volume of each band. (B) The 'thermal' plot generated by SAFA. (C) A spreadsheet of values relating integrated band density to nucleotide number output from SAFA is analyzed by a binding model such as the Hill equation (1). Regions of protection were chosen according to the increase in band integral density as a function of Mg(II) concentration. The Kd is the Mg(II)concentration at which half of the RNA is folded at the site being monitored. The Hill coefficient, nH, is a measure of the slope of the curve which gives information on the binding cooperativity and provides a lower estimate for the number of magnesium ions involved in folding of this particular site. 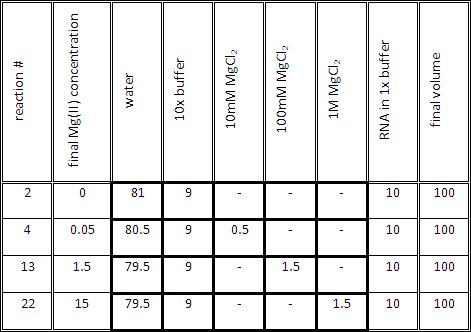 Hydroxyl radical footprinting is a valuable tool to assess the solvent accessible surface area of nucleic acids. Qualitative and quantitative formation of tertiary structure14 can be followed as a function of parameters such as ion type and concentration, pH, temperature, binding proteins or folding co-factors. The compelling combination of a straight forward and inexpensive protocol and the resulting solvent accessibility and folding information on a single-nucleotide level makes this method very attractive. Traditionally the •OH footprinting reaction is performed using added H2O2, a protocol we refer to as 'peroxidative' (Figure 1A). The alternative ('oxidative')protocol17 that we highlight utilizes naturally dissolved O2 to produce small quantities of hydrogen peroxide via the reactions

Both methods generate •OH via the oxidation of Fe(II) to Fe(III) by H2O2 (Figure 1A). Personal preference seems to determine which protocol is used by members of our laboratory for structural mapping and equilibrium titration experiments. The oxidative and peroxidative footprinting reactions take about 30 and 1 min, respectively. This disadvantage is offset by the oxidative protocol being slightly simpler (one less reagent is added) and the 'crispness' on the oxidative electrophoretic band profiles. While this observation suggests less heterogeneity in the •OH cleavage products, this hypothesis has not been tested. We recommend using the oxidative protocol to analyze a large number of footprinting samples (> 15) or samples that contain H2O2 sensitive components.

The presented concentrations of the Fenton reagents are ideal to cleave P4-P6 RNA under single-hit kinetics conditions necessary for footprinting in the indicated buffer. Single hit kinetics ensure that the RNA molecule is cleaved only once on average.18 If an excessive amount of Fenton reagent is used, RNA products can arise from more than one cleavage event. This biases the fragment distribution towards shorter cleavage products. The extent of radical cleavage must be adjusted so that ~20% of end-labeled RNA is cleaved and ~80% of end-labeled RNA remains intact. Dose-response experiments must be used to identify the appropriate Fe(II)/H2O2 concentrations for achieving single-hit kinetics under the solution conditions of an investigator's study.19

The relative solvent accessibility maps obtained from •OH footprinting analyses can be used alone to characterize the RNA structure, folding and intermediate structures formed during equilibrium folding experiments. These data can be combined with results from techniques addressing changes in global conformation7, 20 and/or enzymatic and chemical footprinting studies21 which were generated under identical conditions. Coarse-grained models of RNA structures22 can be developed using hydroxyl radical and complementary chemical and enzymatic footprinting profiles as constraints.

This work was supported by grants from the National Institute of Health RO1-GM085130 and National Science Foundation MCB0929394. We thank Dr. Marion Schmidt for her hospitality and for allowing us to film in her laboratory. 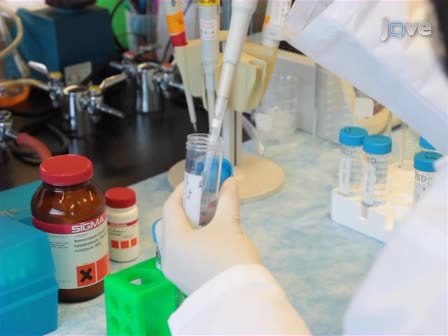