The constricting cuff presented in this article is designed to induce atherosclerosis in the murine common carotid artery. Due to the conical shape of its inner lumen the implanted cuff generates well-defined regions of low, high and oscillatory shear stress triggering the development of atherosclerotic lesions of different inflammatory phenotypes.

It is widely accepted that alterations in vascular shear stress trigger the expression of inflammatory genes in endothelial cells and thereby induce atherosclerosis (reviewed in 1 and 2). The role of shear stress has been extensively studied in vitro investigating the influence of flow dynamics on cultured endothelial cells 1,3,4 and in vivo in larger animals and humans 1,5,6,7,8. However, highly reproducible small animal models allowing systematic investigation of the influence of shear stress on plaque development are rare. Recently, Nam et al. 9 introduced a mouse model in which the ligation of branches of the carotid artery creates a region of low and oscillatory flow. Although this model causes endothelial dysfunction and rapid formation of atherosclerotic lesions in hyperlipidemic mice, it cannot be excluded that the observed inflammatory response is, at least in part, a consequence of endothelial and/or vessel damage due to ligation.

In order to avoid such limitations, a shear stress modifying cuff has been developed based upon calculated fluid dynamics, whose cone shaped inner lumen was selected to create defined regions of low, high and oscillatory shear stress within the common carotid artery 10. By applying this model in Apolipoprotein E (ApoE) knockout mice fed a high cholesterol western type diet, vascular lesions develop upstream and downstream from the cuff. Their phenotype is correlated with the regional flow dynamics 11 as confirmed by in vivo Magnetic Resonance Imaging (MRI) 12: Low and laminar shear stress upstream of the cuff causes the formation of extensive plaques of a more vulnerable phenotype, whereas oscillatory shear stress downstream of the cuff induces stable atherosclerotic lesions 11. In those regions of high shear stress and high laminar flow within the cuff, typically no atherosclerotic plaques are observed.

2. Implanting the cuff around the right carotid artery

3. Explanting the cuff and the carotid arteries

The cuff has to be placed always around one of the two common carotid arteries of an animal (Fig. 1A, 1B) - the contralateral side serves as a control. On the image presenting the two half shells of the cuff (Fig. 1B) the conical shape of the inner lumen is visible. This conical shape is essential for establishing the three regions with distinct flow dynamics. Typical shear stress patterns induced by the cast calculated from Doppler measurements 11 and the corresponding flow velocities based on phase-contrast velocity MR imaging 12 are given in Figure 2.

When the cuff is implanted in ApoE knockout mice fed a western type diet the altered flow dynamics provoke shear stress induced atherosclerotic plaque deposition (Fig. 3): Upstream of the conical constriction low laminar shear stress leads to massive development of atherosclerotic plaques of a more vulnerable phenotype, characterized by lipid cores close to the central lumen covered only by a thin fibrous cap (Fig. 3A1). The conical inner lumen of the cuff leads to an increase in flow velocity. Nearly no plaque deposition is observed in this area. Directly downstream of the site of the bottleneck the immediate broadening of the artery results in an area of vortices and oscillatory flow parameters, which causes less extended plaque development of a more stable phenotype (i.e. less lipid cores which are localized more close to the media). 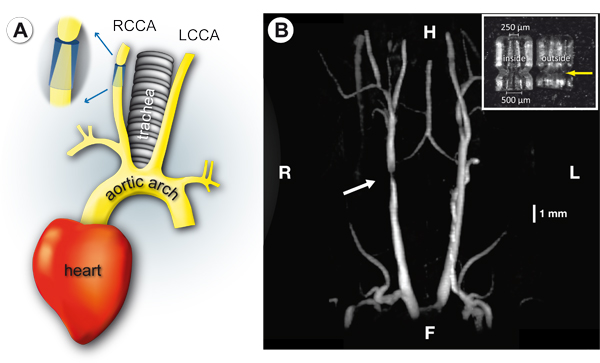 Figure 1. The shear stress modifier - assembly and placement. (A) Schematic drawing of the implanted cuff: The cuff is placed around the right common carotid artery (RCCA) - the contralateral side (LCCA = left common carotid artery) serves as control. (B) In vivo MRI angiography in a mouse: In the maximum intensity projection of a three-dimensional time-of-flight MR angiography the conical constriction induced by the cast (white arrow) is visible (for details see 12). (H=head, F=feet, R=right, L=left). In the upper right corner a macroscopic view on the inner lumen and the outer surface of the cuff half shells is given. When assembled, two half shells form a conical cylinder which modifies the flow dynamics within the vessel in a defined way. To ensure the right fit, a groove on the outer surface of the cuff (yellow arrow) serves as a guiding for the linking suture. 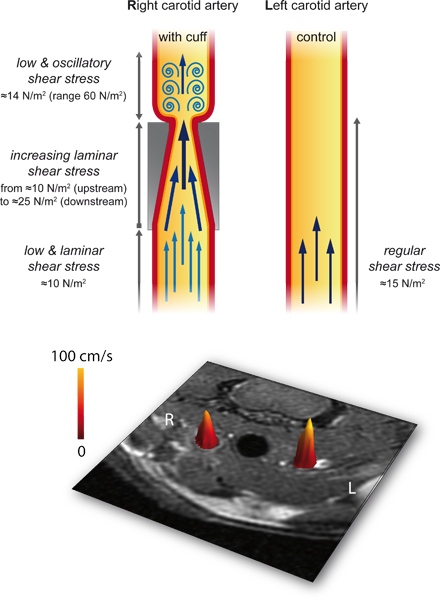 Figure 2. Regions of different flow dynamics and shear stress. Implantation of the cuff alters flow dynamics and subsequently shear stress in the constricted carotid artery in a defined manner. In the upper schematic illustration the different flow properties are indicated and the local approximate values for shear stress are given (based on Doppler measurements 11). Below, corresponding flow velocities for a single animal measured by MRI upstream of the implanted cuff are shown in a T1-weighted cross-sectional MRI-image of the neck (phase-contrast velocity imaging, for details see 12). 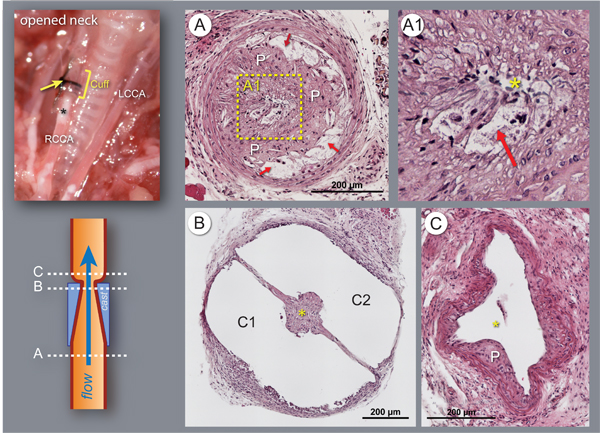 Figure 3. Shear stress induced plaque development in ApoE knockout mice. The upper left corner shows the macroscopic view on the opened neck and exposed carotid arteries of an ApoE knockout mouse under high fat (western type) diet 8 weeks after implantation of a shear stress modifier around the right common carotid artery (RCCA). The opaque white region of the vessel (*) upstream of the cuff corresponds to a site of extensive atherosclerotic plaque deposition. The yellow arrow indicates the thread which combines the two cuff halves. In contrast, there are no signs of plaque deposition in the left common coronary artery (LCCA).
(A)-(C) Representative HE stained cross-sections of the right common carotid artery of an ApoE knockout mouse under western type diet 8 weeks after implantation of the cuff. The schematic illustration gives the corresponding planes (dotted lines) where the sections were located. (A) Upstream of the cuff atherosclerosis leads to massive plaque deposition. Large lipid cores (red arrows), which in part are located close to the central lumen (detail A1) characterize the vulnerable character of these plaques. (B) At the plane of the cuff bottleneck nearly no plaque development is obvious, whereas directly downstream of the cuff (C) oscillatory flow leads to moderate plaque development of a more stable type (i.e. less or no lipid cores). (C1, C2 = half shells of the cuff, P = plaques, asterisk = vessel lumen)

In order to minimize experimental variation it is recommended to work with animals of nearly the same age and with the same diet history. A recently published investigation demonstrates that the shear stress modifier applied in wildtype mice might be a good model for the investigation of endothelial dysfunction and early inflammatory responses induced by altered flow dynamics 13. However, for the enquiry of atherosclerotic plaque development transgenic hyperlipidemic mouse models (e.g. the ApoE knockout mouse) are required. Progression and extent of plaque deposition in each mouse model depend on the type of diet used. In general, the higher the cholesterol/fat content of the diet, the more rapid the progression of the disease is.

During cuff implantation the surgeon should try to minimize tissue damage and manipulation, for this will lower inflammatory responses due to injury. Minimizing injury is especially important when inflammatory processes in the course of atherosclerosis are in the focus of the study. In order to estimate the degree of post-surgical inflammation it is highly recommended to implant non-constrictive control cuffs in some animals. The control cuff should be a cylinder made of the same material, but with a continuous, non-constrictive inner diameter.

It is also essential to always place the cuff at the same position of the carotid artery and to choose always the same side, otherwise flow velocities are not reproducible. The surgeon has to take great care of the right fit of the cuff when combining the two cuff half shells, because improper fit results in a not readily formed conical inner lumen which in turn leads to unpredictable flow parameters.

A great advantage of the shear stress modifier is that it creates three well defined regions with characteristic and reproducible patterns of flow velocities within the same vessel (Fig. 2, Table 1). In a hyperlipidemic environment each of these flow patterns cause plaque deposition of a characteristic phenotype (Fig. 2) resembling vulnerable and stable plaques in humans.

Thus, the presented mouse carotid cuff is a valuable in vivo model for the investigation of shear stress induced plaque phenotypes (stable and unstable). Furthermore, it might be also an ideal small animal model for the development of new molecular imaging probes, designed to early identify sites of atherosclerosis even before progressed plaque deposition leads to stenosis or plaque rupture, the initial event giving rise to life-threatening cardiovascular events like thrombus formation and myocardial infarction. 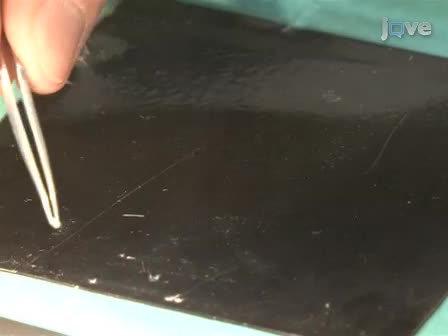