Sepsis refers to a systemic inflammatory response syndrome resulting from a microbial infection, and can be simulated by a surgical technique termed cecal ligation and puncture (CLP). Here we describe a method to use CLP-induced animal model to screen medicinal herbs for therapeutic agents.

Sepsis refers to a systemic inflammatory response syndrome resulting from a microbial infection. It has been routinely simulated in animals by several techniques, including infusion of exogenous bacterial toxin (endotoxemia) or bacteria (bacteremia), as well as surgical perforation of the cecum by cecal ligation and puncture (CLP)1-3. CLP allows bacteria spillage and fecal contamination of the peritoneal cavity, mimicking the human clinical disease of perforated appendicitis or diverticulitis. The severity of sepsis, as reflected by the eventual mortality rates, can be controlled surgically by varying the size of the needle used for cecal puncture2. In animals, CLP induces similar, biphasic hemodynamic cardiovascular, metabolic, and immunological responses as observed during the clinical course of human sepsis3. Thus, the CLP model is considered as one of the most clinically relevant models for experimental sepsis1-3.

Various animal models have been used to elucidate the intricate mechanisms underlying the pathogenesis of experimental sepsis. The lethal consequence of sepsis is attributable partly to an excessive accumulation of early cytokines (such as TNF, IL-1 and IFN-γ)4-6 and late proinflammatory mediators (e.g., HMGB1)7. Compared with early proinflammatory cytokines, late-acting mediators have a wider therapeutic window for clinical applications. For instance, delayed administration of HMGB1-neutralizing antibodies beginning 24 hours after CLP, still rescued mice from lethality8,9, establishing HMGB1 as a late mediator of lethal sepsis. The discovery of HMGB1 as a late-acting mediator has initiated a new field of investigation for the development of sepsis therapies using Traditional Chinese Herbal Medicine. In this paper, we describe a procedure of CLP-induced sepsis, and its usage in screening herbal medicine for HMGB1-targeting therapies.

1. Establishment of Animal Model of Sepsis

Within a few hours of CLP surgery, animals exhibit clinical signs of sepsis that include piloerection, lethargy, huddling, and decrease in food and water intake. Animals developing a severe peritonitis with consecutive systemic infection normally die within 48 - 96 hr. However, even age-, sex-, and genetic background-matched animals can respond to CLP surgery in a distinguishable manner in the course of experimental sepsis. For instance, at 48 hr post CLP, while some animals may have approached the moribund state (as defined in Figure 1), others may remain at a non-moribund state.

Comprehensive surveys of circulating cytokines revealed dramatic differences in levels of several cytokines (e.g., IL-6, KC, MIP-2, and sTNFR1) between mice in the moribund and non-moribund states (Figure 1)12. Notably, these inflammatory mediators have been classified as surrogate markers of sepsis because their circulating levels are reliable predictors of lethal outcome in experimental12-14 or clinical sepsis15. In addition, CLP also induced local release of various pro- and anti-inflammatory cytokines and chemokines. For instance, at 48 hr post CLP, significant amounts of cytokines (e.g., IL-6) and chemokines (KC and MIP-2) can still be measured not only systemically in the blood, but also locally in the peritoneal lavage fluid (Figure 2).

Using macrophage cultures, we were able to evaluate the capacities of various herbal extract or components in inhibiting endotoxin-induced HMGB1 release (Figure 3). In light of their capacity in inhibiting HMGB1 release, we further explored their efficacy in animal models sepsis. Given the late and prolonged kinetics of HMGB1 accumulation in experimental sepsis8, the first dose of HMGB1 inhibitors was given 24 hr after the onset of sepsis - a time point when mice developed clear signs of sepsis including lethargy, diarrhea, and piloerection. As shown in Figure 4, delayed and repeated administration of a major green tea component, epigallocatechin-3- gallate (EGCG), beginning at 24 h after onset of sepsis, significantly rescued mice from lethal sepsis12. Even when given orally, EGCG still rescued mice from lethal sepsis, significantly increasing animal survival rates from 16% to 44%16. It would be important to determine whether combinational therapies with several herbal components could achieve a significant better protection in animal models of sepsis. Taken together, these experimental data validated our approach to screen novel therapeutic agents using an animal model of CLP-induced sepsis. 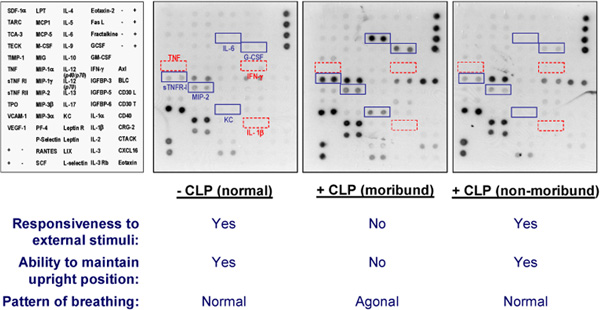 Figure 1. Circulating levels of surrogate markers are dramatically higher in septic animals approaching moribund state. Balb/C mice were subjected to sepsis by CLP and monitored for the development of signs of sickness. At a late stage of sepsis (52 hr post CLP), blood was collected from 3 normal mice (-CLP), 3 septic mice approaching the moribund state, and 3 septic mice in the non-moribund state. Serum was pooled from each group, and assayed for the cytokine profile by antibody arrays. Note the dramatic difference in the relative levels of several surrogate markers between different groups. Adapted from doi:10.1371/journal.pone.0001153.g006 with granted permission from the publisher. 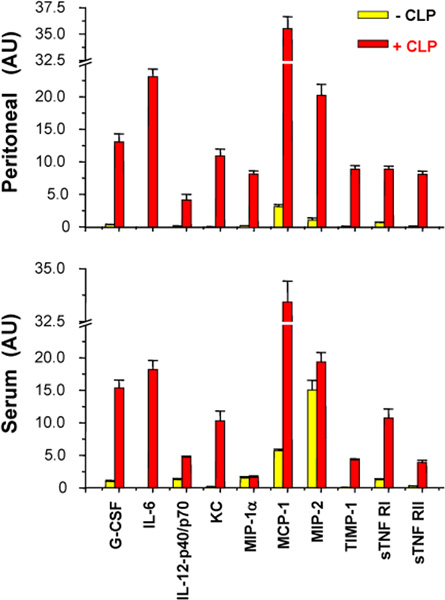 Figure 2. Detection of local and systemic cytokines and chemokines at 48 hr post CLP. Balb/C mice were subjected to sepsis by CLP, and blood or peritoneal fluid were harvested at 48 h post CLP. Relative levels of several cytokines and chemokines in pooled serum or peritoneal lavage fluid were measured by cytokine antibody arrays, and expressed as arbitrary units (AU). As controls, blood and peritoneal fluid samples were obtained from normal healthy animals (-CLP) without laparotomy. 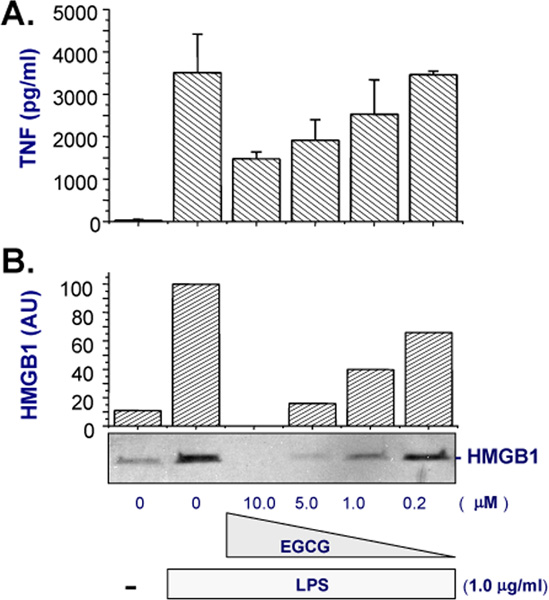 Figure 3. Herbal component dose-dependently inhibited endotoxin-induced HMGB1 release in primary macrophage cultures. Primary murine peritoneal macrophages were stimulated with LPS in the absence, or presence of herbal component (e.g., EGCG, 15 μM). At 16 hours after LPS stimulation, levels of HMGB1 in the culture medium were determined by Western blotting analysis. Adapted from doi:10.1371/journal.pone.0001153.g006 with granted permission from the publisher. 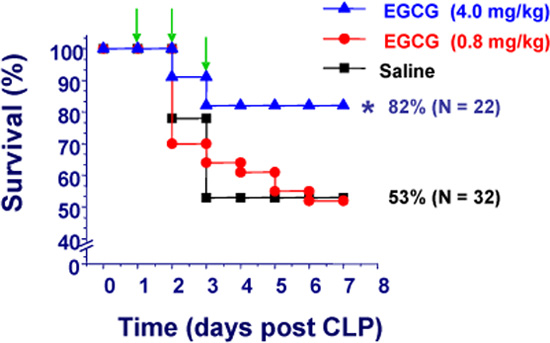 Figure 4. Herbal component rescued mice from lethal sepsis. Balb/C mice were subjected to lethal sepsis by CLP, and herbal component (EGCG) was intraperitoneally administered at +24, +48, +72 hours post the onset of sepsis. Animal survival was monitored for up to two weeks. The Kaplan-Meier method was used to compare the differences in mortality rates between groups. *, p < 0.05 versus saline. Adapted from doi:10.1371/journal.pone.0001153.g006 with granted permission from the publisher.

In the laboratory, several animal models of sepsis have been employed to understand the pathogenesis of sepsis in order to develop potential novel therapies. Their clinical relevance remains a subject of debate before the successful translation of animal studies into clinical applications for sepsis. Although neutralizing antibodies against early cytokines (e.g., TNF) were protective in animal models of bacteremia/endotoxemia17,18, they actually worsen survival in animal model of sepsis19. Similarly, most anti-TNF agents failed to show efficacy in clinical trials of sepsis20-22. This failure reflects partly on the complexity of the underlying pathogenic mechanisms of sepsis23,24. In addition, it may also be attributable to pitfalls in the selection of: 1) feasible therapeutic targets or drugs; 2) optimal doses and timing of drugs; and 3) non-realistic clinical outcome measures (such as mortality rates)25.

The recent discovery of HMGB1-targeting herbal extract and/components, including Danggui26, Green tea12,16, and Danshen27 has provided successful examples of preclinical investigation employing animal models of sepsis. Further investigation in this area will shed more light on the molecular cascades underlying regulation of the innate immune response, and provide clues for the development of therapeutics for various inflammatory diseases. When first establishing CLP in your laboratory, effort should be made to perform the surgery procedure as quickly and exactly as possible to ensure reproducibility, particularly when using a large number (30-40) of mice to compare the survival rates between several experimental groups of an experiment. The use of long-acting anesthetics (such as ketamine and xylazine) allows us to complete CLP surgical procedure on a large number of mice in a relatively short time frame, and meanwhile help to remove potential dose variance often occurred when using volatile anesthetics. Survival rates and systemic cytokine accumulation can be taken as signs of successful performance of CLP procedure.

CLP model has been widely used in rodents because of obvious advantages in low cost, simplicity of surgical procedure, and extensive pathological, immunological, physiological characterizations. However, there are a number of limitations of the mouse CLP model1-3. For instance, like all animal models, a species disparity is highlighted by the fact that cecal ligation without puncture can be fatal in human but not in mice. Moreover, because of small size of mouse and dehydration subsequent to CLP, it is often difficult to obtain serial blood samples for cytokine measurement. These disadvantages can be partially overcome by establishing CLP models in larger animals2,3,27,28. In addition, it is important to point out that the mortality rates and the progress of peritonitis in rodents are largely determined by the amount of stool extrusion, which are affected by the gauge of the needle used to puncture the cecum, the number of punctures, the total volume of ligated cecum and the viscosity of the stool2,3. In addition, the dose and frequency of administration of antibiotics at early stage of CLP can also affect the mortality rates. Finally, animal sources and housing environment can also contribute to the variance of mortality rates.

A.E.S. and H.W. are co-inventors of patent applications related to HMGB1 inhibitors (tanshinones) as potential therapeutic agents for sepsis. 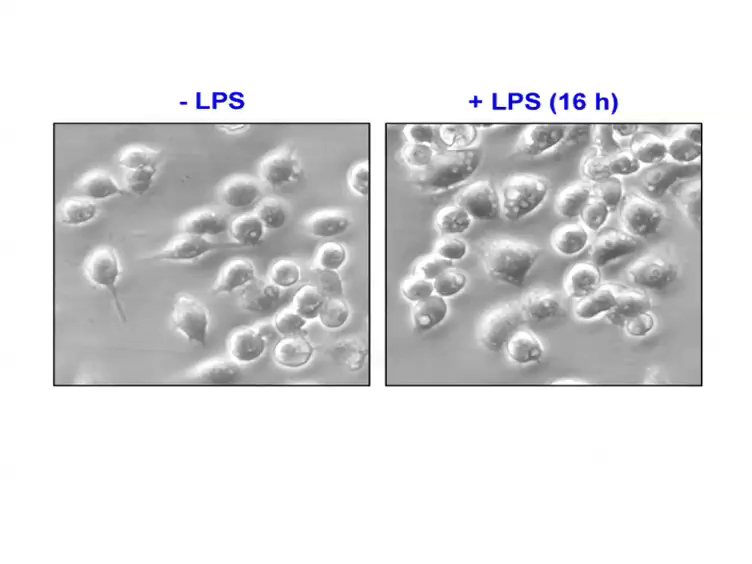