The cranial mesenchyme undergoes dramatic morphogenic movements that likely provides a driving force for elevation of the neural folds1,2. Here we describe a simple ex vivo explant assay to characterize the cellular behaviors of the cranial mesenchyme during neurulation. This assay has numerous applications including being amenable to pharmacological manipulations and live imaging analyses.

Neural tube closure in the cranial region occurs between embryonic day 8.5 (E8.5) and 9.5 in the mouse embryo. Failure to properly close the neural tube in the head results in anencephaly, a common structural birth defect in humans and is incompatible with life. The forces that drive cephalic neural tube closure are generated from both the neural tissue itself and the surrounding epidermis and mesenchyme3. In particular expansion of the cranial mesenchyme is thought to be essential for elevation of the cranial neural folds1,2. The cranial mesenchyme is rich in ECM proteins in particular glycosylated proteins such as heparin sulphate proteoglycans, chondroitin sulfates and hyaluronate4-8.

We have devised an ex vivo explant assay to directly examine the consequence of genetic mutation or pharmacological manipulation on the behavior of cranial mesenchyme cells15. This assay is similar to that published by Tzahor et al 2003 to access the differentiation potential of the cranial mesenchyme that underlies the rhombomeres18 except we have modified the explant dissection to study the migratory properties of more anterior populations of cranial mesenchyme that underlie the anterior neural plate. Our method is also a modification of explant assays performed in the chicken embryo to analyze the migratory behavior of the neural crest with key differences. Previous preparations have explanted the neural crest or the more posterior paraxial mesoderm19,20. Furthermore, during neural fold elevation in the chicken embryo, the neural crest has not yet emigrated from the dorsal neural tube and thus explants taken of the anterior paraxial mesoderm would not contain neural crest cells. In our assay, cranial mesenchyme explants consisting of paraxial mesoderm, neural crest and surface ectoderm are prepared and plated on a substrate. Experimental manipulation including isolation of explants from genetic mutants, plating explants on different ECM or pharmacological treatments can be performed. Cells migrate from the explant and the distance, number and behavior can be analyzed and compared between treatment groups. In addition, this preparation is amendable to analyses of cellular migration by live imaging techniques. After the migration experiment, explants can be fixed and subjected to immunohistochemical analyses to further elucidate the effect of treatments. On the whole, the protocol presented here is a simple ex vivo assay to investigate the behavior of the cranial mesenchyme. As a representative experiment, we utilize this assay to examine the migration of cranial mesenchyme on different extracellular substrates.

Sylgard plates with added charcoal are prepared per the manufacture's protocol. The resistant black background of these plates provides support for pinning down the embryo and the color offers good contrast which facilitates visualizing the translucent embryo.

Critical steps in the protocol

The appearance of cells migrating from cranial mesenchyme explants is shown in Figure 2. We tested migration on various ECM substrates that are present in the cranial mesenchyme during neurulation including Fibronectin (100 mg/ml; Sigma #F1141), Laminin (100 mg/ml; Sigma #L2020), MaxGel ECM (1:500 dilution in DMEM; Sigma #E0282) and Hyaluronic acid (1 mg/ml; Sigma, # 53747). Cells fail to migrate from the explant when no ECM is present (Data not shown) and all substrates tested supported migration of the cells. Both the shape as well as the sizes of cells that migrate from the explants depends upon the substrate. This is expected as previous studies demonstrate that the mechanical forces generated by interaction of cells with different ECM affect both the shape and migratory properties of cells21. 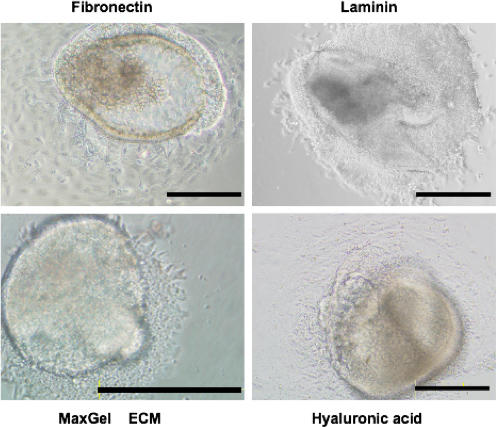 The method applied here provides a powerful assay to examine the behavior of cranial mesenchyme cells. In addition to the static analyses presented here, live imaging experiments in bright field or in combination with expression of GFP-labeled proteins can be employed to examine the behaviors of cells in real time as they migrate from the explant. For live imaging experiments, explants could be labeled with DiI or to differentiate migration of neural crest from the paraxial mesoderm, ROSA-YFP;Mesp1-cre or ROSA-YFP;Wnt1-cre or other transgenic lines could be used. Cranial mesenchyme-ECM interactions can also be examined utilizing this explant assay. Here we plate explants on different ECM substrates that are present in the cranial mesenchyme to show that cells migrate on these to different degrees and that the ECM influences the morphology of the cells. Furthermore, explants can be embedded in a three-dimensional matrix to access the behaviors of cells in this context. This explant assay is amendable to analysis of the effect of genetic and pharmacological manipulations on cranial mesenchyme behaviors to analyze intrinsic and extrinsic cues that can regulate and modify migration. For example, we utilized this assay in our studies to discern the role of excess Hsp90 secretion in the abnormal cellular behaviors in Hectd1 mutant cranial mesenchyme15. In these experiments, we treated explants with anti-Hsp90 antibody, Hsp90 protein, geldanamycin and DMA (dimethyl amelioride) to block secretion of Hsp90 to demonstrate that the abnormal behavior of Hectd1 mutant cells is due to excess extracellular Hsp9015. Similar approaches could be used to pharmacologically dissect additional pathways underlying normal or abnormal morphogenesis of the cranial mesenchyme. Once the assay is completed, explants and migrating cells can be analyzed by a host of methods. For example, immunohistochemical analyses can be employed to examine localization of proteins critical for cell movements. Transcriptome analyses could also be employed to determine how treatments affect gene expression.

One significant limitation of this technique is that it does not model behaviors in three-dimensions as they would occur in vivo. Modification of the protocol where explants are embedded in a three-dimensional matrix (e.g. matrigel) along with expression of fluorescent protein-marked cellular compartments could be employed necessary to address this issue. Even if these modifications were performed, further experiments to correlate behaviors seen in this ex vivo assay with those in vivo would be necessary. Other limitations include the large number of embryos required to generate sufficient numbers to generate statically significant data. Most importantly, the dissection is relatively simple, it does require practice to master. 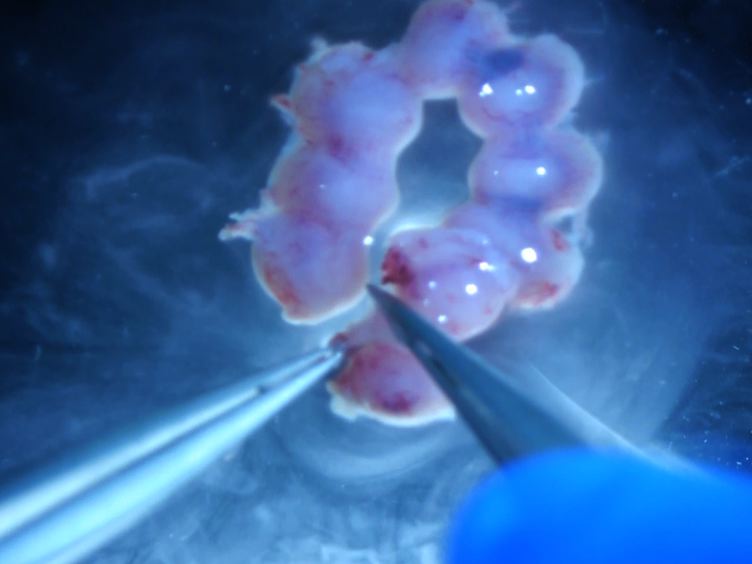