A simple, robust and scalable technique to functionalize and self-assemble macroscopic nanoparticle-ligand monolayer films onto template-free substrates is described in this protocol.

This protocol describes a self-assembly technique to create macroscopic monolayer films composed of ligand-coated nanoparticles1,2. The simple, robust and scalable technique efficiently functionalizes metallic nanoparticles with thiol-ligands in a miscible water/organic solvent mixture allowing for rapid grafting of thiol groups onto the gold nanoparticle surface. The hydrophobic ligands on the nanoparticles then quickly phase separate the nanoparticles from the aqueous based suspension and confine them to the air-fluid interface. This drives the ligand-capped nanoparticles to form monolayer domains at the air-fluid interface.  The use of water-miscible organic solvents is important as it enables the transport of the nanoparticles from the interface onto template-free substrates.  The flow is mediated by a surface tension gradient3,4 and creates macroscopic, high-density, monolayer nanoparticle-ligand films.  This self-assembly technique may be generalized to include the use of particles of different compositions, size, and shape and may lead to an efficient assembly method to produce low-cost, macroscopic, high-density, monolayer nanoparticle films for wide-spread applications.

The self-assembly of macroscopic nanoparticle films has attracted great attention for their unique properties determined from the geometry and composition of the elements5 and may lead to of a wide range of optical, electronic and chemical applications6-14. To self-assemble such films metallic nanoparticles capped with ligands must be packed into high density, monolayers. However several assembly issues need to be addressed to advance the development of such materials.

Cheng et al.18 phase transferred gold nanorods using thiolated polystyrene in a water-tetrahydrofuran suspension.  The nanorods where then re-suspended in chloroform and a drop was placed at an air-water interface and evaporated slowly, forming monolayer films. Bigioni et al.17 created macroscopic monolayers of dodecanethiol capped gold nanospheres using excess ligand and rapid solvent evaporation, but the nanospheres needed to be phase transferred prior to self-assembling.

Once the monolayer films are formed they typically need to be transported onto a substrate.  Mayya et al.3 confined nanospheres at a water-toluene interface and transferred them onto template-free substrates using surface tension gradients. Similarly, Johnson et al.4 suspended silver nanospheres in excess ligand and then translated the nanoparticles up the walls of the vial using surface tension gradients from two immiscible fluids. While assembly techniques exist to address each of these issues the need for more efficient techniques is needed to aid in the development of large-scale nanoparticle film production.

As an illustrative example of the self-assembly technique, macroscopic, thiol-alkane capped gold nanosphere monolayer films are produced as follows:

2. Transferring the Monolayers onto Removable Substrates

Figure 1(a) shows a suspension of gold nanospheres, thiol-alkane ligands, tetrahydrofuran and water in a glass vial immediately after mixing. A schematic of the three main self-assembly stages, phase transfer, phase separation, and surface tension gradient mediated film transport is shown in Figure 1(b) as an expanded view at the air-fluid interface near the side of the vial.

The thiol groups on the ligands rapidly bond to the gold nanospheres after mixing, displacing the ionic surfactant, causing the nanospheres to become hydrophobic and more miscible in THF. The lower density of THF, relative to the water, aids to quickly transport the nanospheres to the air-fluid interface where they become confined by the reduction of free energy, Figure 1(c). Suspending the ligands in a water-miscible organic solvent also increases the available surface area between the thiol-ligands and nanospheres, increasing the rate the nanospheres phase transfer, compared to systems that use two immiscible fluids3,4.

Macroscopic monolayer domains of nanospheres typically begin to form at the air-fluid interface within several minutes after mixing, but this process is ligand dependent. The shaking of the vial also coats the sides of the vial with a thin film of the suspension. The THF in the thin film on the sides of the vial evaporates faster than the water, creating a surface tension gradient between the thin film and bulk suspension. The fluid then flows from the low to the high surface tension regions carrying the nanospheres domains from the air-fluid interface up the side of the vial, Figure 1(d)3. After all the organic solvent has evaporated or all the nanosphere have been removed from the suspension the reaction is complete, Figure 1(e). 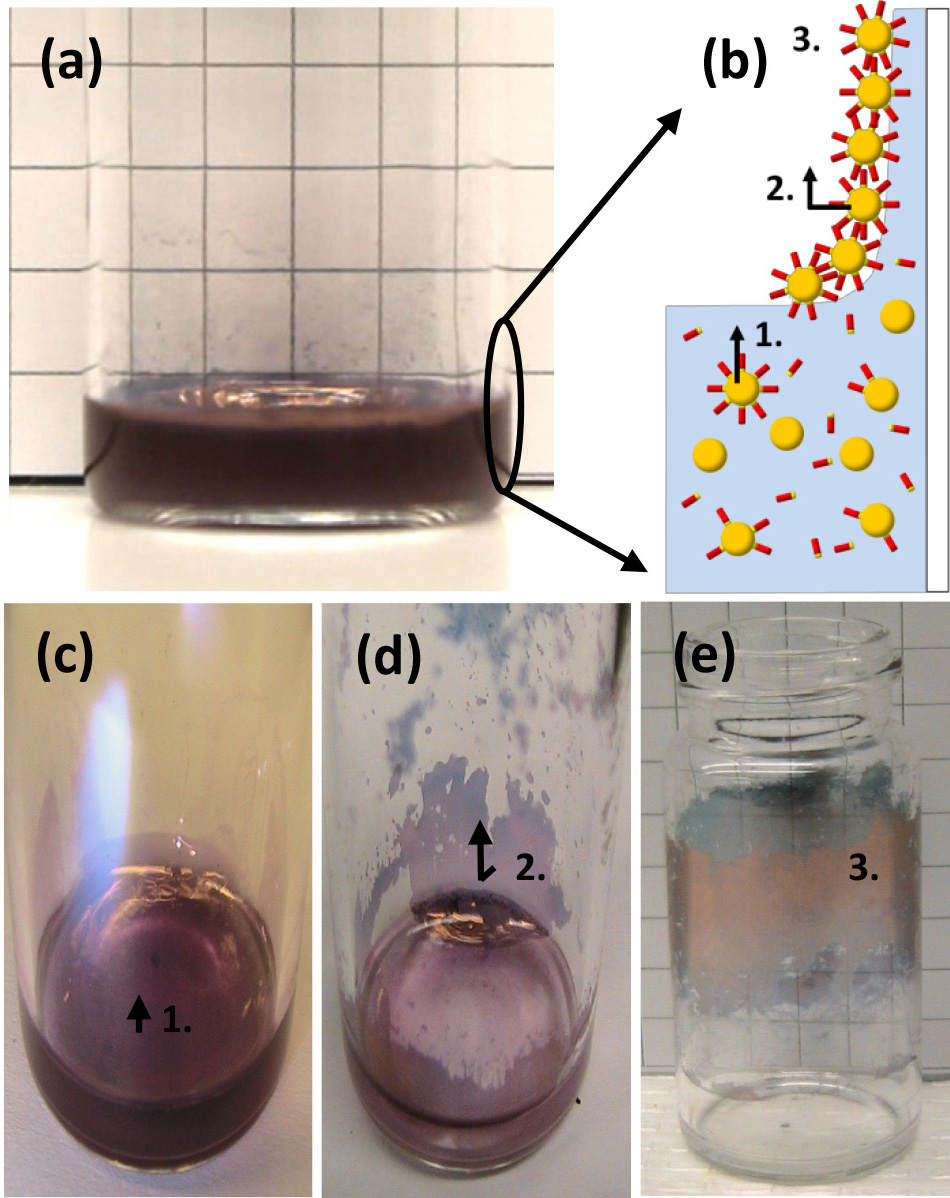 Macroscopic nanoparticle-ligand monolayer films (~cm) are demonstrated using this technique without multilayers or large particle density gradients on a template-free substrate. Figure 2 is an image of a thiol-alkane capped 15 nm gold nanosphere monolayer film on a glass substrate partially reflecting light (right side), signifying the high volume fraction of nanospheres and transmitting light (left side), demonstrating the preservation of the plasmon resonances, uniformity and optical clarity. If more than one layer is present it can easily be seen with the naked eye1. The right edge of the film has excess surfactant present on the top surface giving rise to the slight discoloration in the reflected light. Additional monolayer images can be found in references1,2. 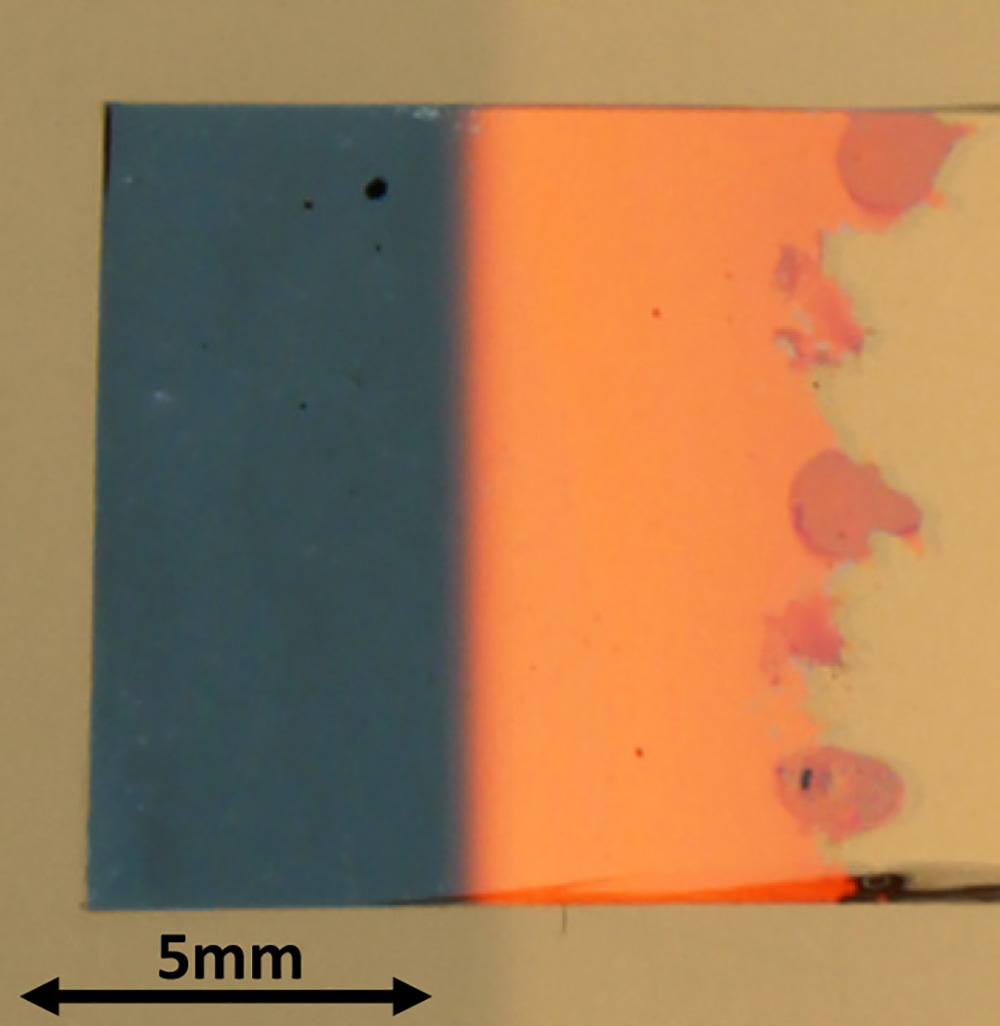 Figure 3 presents false-colored SEM images of a thiol-alkane capped 15 nm gold nanosphere monolayer film on a silicon wafer substrate. Figure 3(a) shows the edge of the film, demonstrating the films are monolayers and the nanospheres pack into amorphous domains at microscopic length scales. At nanoscopic length scales the films contain hexagonally close packed domains as demonstrated by the Fourier transform of the image in Figure 3(b) (inset).

Figure 3. False-colored SEM images. Thiol-alkane capped 15 nm gold nanosphere monolayer films. The inset in upper-right corner of (b) is the Fourier transform of the image.

The normalized experimental absorbance from a monolayer film consisting of thiol-alkane capped 15 nm gold nanospheres on a glass substrate (red line), and a suspension of 15 nm gold nanospheres in water (blue line) and phase transferred into chloroform (green line) is shown in Figure 4. Although shifted and slightly broadened, relative to the aqueous suspension, due to particle-particle coupling20 and changes in the host medium, the plasmon resonances are preserved well for the monolayer film given the density of nanospheres. 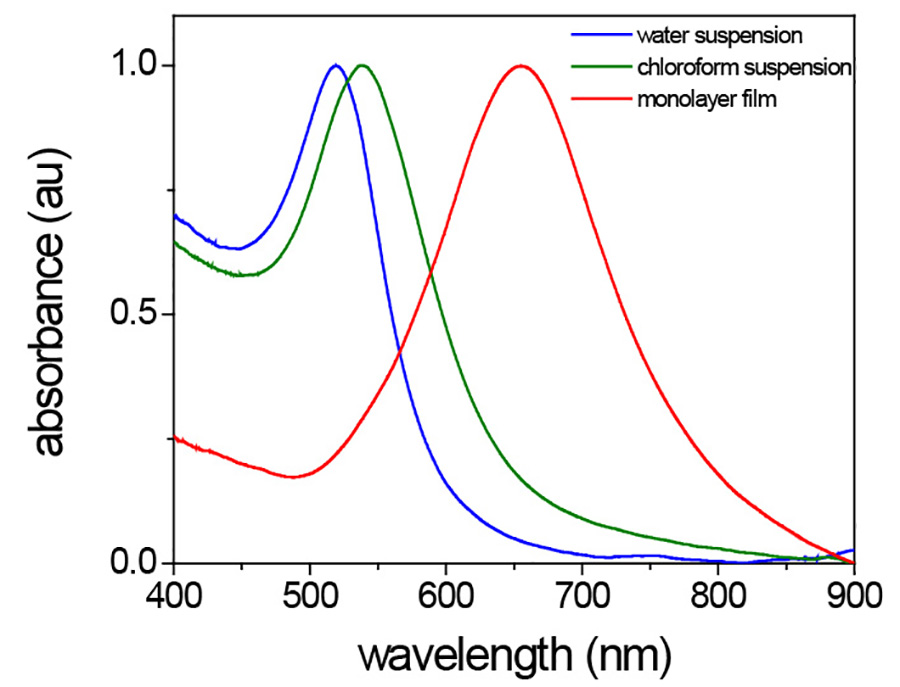 This protocol describes a single ‘one-pot’ self-assembly technique to create macroscopic nanoparticle-ligand monolayer films using phase transfer, phase separation and surface tension gradients.  The advantage of this technique is that it combines three self-assembly processes into a single, low-cost process; by quickly and efficiently phase transferring the nanoparticles, assembling the particles into monolayers at the air-fluid interface and transporting the monolayer films onto template-free substrates.

The rate of the nanosphere phase transfer was observed to decrease with the age of the nanoparticles, presumably from changes in the nanosphere surface chemistry21. Typically the ‘life-time’ of the gold nanoparticles was less than 3 months from when they were synthesized.  If the gold nanoparticles are purchased, the phase transfer rate is also greatly reduced if the manufacturer stabilizes the nanoparticles in excessive amounts of ‘unknown’ surfactants.  The phase transfer rate was difficult to quantify for commercial nanospheres since the age and surfactant were unknowns. For larger nanosphere diameters (>30 nm) the size of the nanospheres hinders large film formation and the film areas are decreased typically to square millimeters.  Hydrophobic substrates, such as Teflon, did not form good films since the water-THF could not wet the surface and subsequently transport the film onto the substrate surface.

The amount of ligand used needs to be sufficient to cover the entire surface area of the nanoparticles in suspension to observe film formation at the air-liquid interface and to enable the films to translate up the side of the vial.  Adding excess ligands greatly increased the speed and final height the films reached on the substrate1. The packing density of the nanoparticle into monolayer films also depends on the specific ligand selected; thiol-alkane/ene/phenol were tested and all worked reasonably well, singularly or in combination. The pH of the reaction mixture is also an important parameter and will be the subject of future studies.

This self-assembly technique, with further refinement, may enable the future development of high-throughput, tunable nanoparticle-ligand structures.

This work was supported with funding provided from the Office of Naval Research. J. Fontana acknowledges the National Research Council for a postdoctoral associateship. 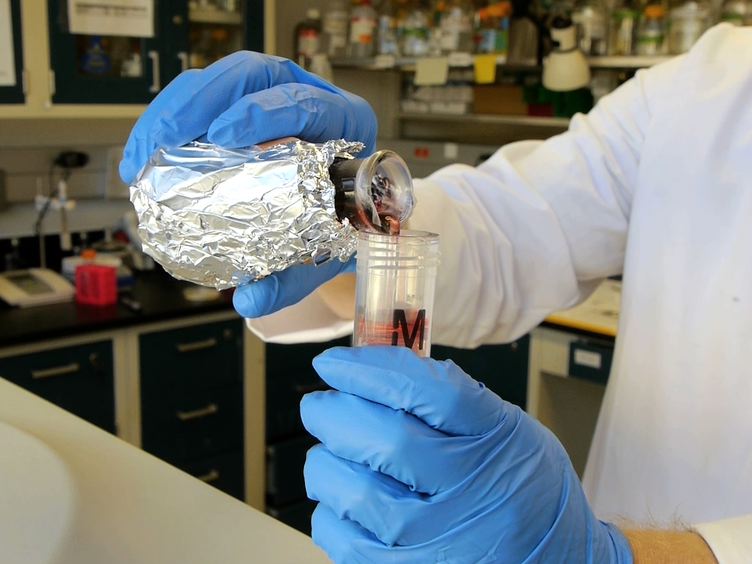