Mice (Mus musculus) are an important research tool for modeling human disease progression and development in the lab. Despite differences in their size and appearance, mice share a distinct genetic similarity to humans, and their ability to reproduce and mature quickly make them efficient and economical candidate mammals for scientific study.

This video provides a brief overview of mice, both as organisms and in terms of their many advantages as experimental models. The discussion features an introduction to common laboratory mouse strains, including the nude mouse, whose genetic makeup renders them both hairless and immunodeficient. A brief history of mouse research is also offered, ranging from their first use in genetics experiments to Nobel prize-winning discoveries in immunology and neurobiology. Finally, representative examples of the diverse types of research that can be performed in mice are presented, such as classic behavioral tests like the Morris water maze and in-depth investigations of mammalian embryonic development.

Rodents make up about 90% of all the animals used in research, the majority of which are mice.

Mice are easy and inexpensive to maintain, and their genetic similarity to humans, coupled with their short generation time and high fertility, make them ideal candidates for genetic manipulation and study.

This video provides an overview of the mouse as a model organism and discusses some of its many applications in biological and biomedical research.

The common house mouse, Mus musculus, belongs to the Mammalian class of vertebrates. Mice are found in the largest order of mammals: Rodentia, characterized by large incisors that grow continuously throughout the animal’s life.

Mice are among the smallest mammals, weighing an average of 1 g at birth and reaching their peak weight of about 25 - 40 g in adulthood.

Compared to other mammals, the mouse life cycle is also relatively short. Gestation lasts only 18 - 21 days, at which point the pups are born hairless and blind. While they feed off their mother’s milk for the first few weeks of life, the pups will develop into sexually mature adults by just 8 weeks of age.

Due to their ability to adapt to a variety of environments, mice can be found on every continent except Antarctica. As a commensal species, mice frequently live in close association with humans; whether we like it or not!

So why are these familiar creatures so popular in research?

The ability of mice to quickly produce large numbers of offspring allows the rapid and inexpensive generation of a colony of animals for scientific investigation. Additionally, the fact that mice are so small means that the colony can be housed in a minimum amount of space. The same cannot be said for most mammals.

Despite our considerable physical differences, mice and other placental mammals share a striking genetic similarity to humans. The mouse genome has been fully sequenced, which facilitates genetic manipulations such as the generation of “knockout” mice, whose genomes are modified to replace a segment encoding specific genes with selectable markers, thereby knocking out that gene.

Using knockout mice, we can assess the physiological requirement for individual gene products, as in this experiment measuring changes in embryonic heart rate caused by absence of the enzyme Furin.

Many families of inbred mouse strains exist. Because their uniformity eliminates the variables that may be introduced by genetic diversity among individual mice, the use of these strains improves experimental reproducibility.

But which strain will you choose for your experiment? The answer depends on more than your favorite coat color. In fact, you might even want a mouse with no coat at all! The genetic makeup of this little critter, known as the nude mouse, leads to missing hair, but also a severely compromised immune system. As a result, nude mice serve as better hosts for in vivo experiments where foreign tissue is introduced, as in this study monitoring the engraftment of fluorescent cancer cells.

Now that you have an understanding of just how important mice are to science, let’s talk about some exciting discoveries researchers have made using these model animals.

In the early 20th century, William E. Castle became the first scientist to use mice to study genetics in the lab. Castle and his students obtained many of their research subjects from Abbie Lathrop, a fancier who sold mice as pets from her nearby home. Interestingly, some of these strains, such as the C57BL/6J line, are still commonly used in research labs today.

In the late 1920s, Sir Alexander Fleming had discovered the antibiotic properties of penicillin using bacteria in a petri dish, but it wasn’t until almost 10 years later that Howard Florey and Ernst Chain confirmed its pharmacological potential by healing mice infected with hemolytic streptococci.

In 1945, Fleming, Florey, and Chain were recognized for their Nobel prize-winning contributions to the field of biomedicine.

Around the same time antibiotics were being discovered, George Snell first described the a chromosomal region known as the major histocompatibility complex, which encodes receptors that help immune cells detect foreign invaders. Known as human leukocyte antigens in humans, specific variants of these receptors are linked to autoimmune disorders, where host tissue is mistakenly identified as foreign.

Rolf Zinkernagel and Peter Doherty then used a mouse model system to determine that antigen recognition by the immune system’s T cells is responsible for the initiation of the immune response.

In 1997, Stanley Prusiner was awarded the Nobel prize for identifying prions — misfolded, infectious proteins — in mice infected with the neurodegenerative disease, scrapie.

Mice were also instrumental in the work performed by Richard Axel and Linda Buck, who first cloned the large family of olfactory receptor genes. These proteins, expressed by neurons in the olfactory epithelium, are activated by binding to inhaled odorants. Buck and Axel also significantly advanced our understanding of how the signals produced by these receptors are transmitted through our neural circuitry. In 2004, they were awarded the Nobel prize for their groundbreaking discoveries.

Now that you’ve seen how mouse work has produced some landmark experiments historically, let’s take a look at some of the types of research going on in mice today. To begin, mice are frequently used in behavioral research.

For example, mice make great models for measuring motor balance. They are also used to study how the brain records and recalls memories, with behavioral paradigms such as the Morris water maze. In this test of spatial memory, mice are trained to use visual cues to locate a platform and escape from a pool of water.

Because our immune systems function similarly, mice are also good systems for studying infectious disease. For example, in this experiment, mice consume bread contaminated with Listeria and then various tissues are collected to investigate the mechanism by which this food-borne pathogen spreads throughout the body.

Mice can be used to study viral disease progression as well. In this study, mice are infected intranasally with herpes virus in order to mimic physiological exposure to the pathogen.

Our high genetic similarity is not just important for investigating human disease; understanding mouse development can also improve our understanding of human development. For example, in this study, embryonic jaws are sectioned and grown in culture to better visualize early tooth development.

You just watched JoVE’s introduction to Mus musculus. In this video, we discussed general characteristics of mice, why they are so popular in the lab, landmark discoveries made in this model, as well as a few of the ways in which mice are used in research today. As always, thanks for watching JoVE Science Education! 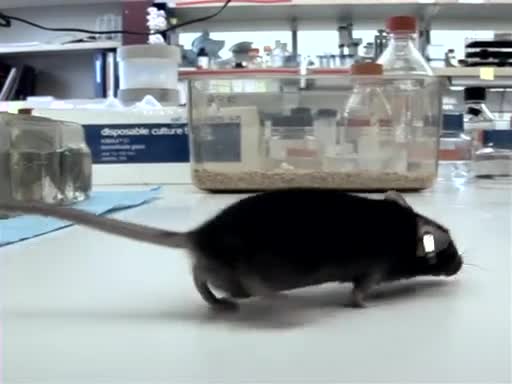