Stable radicals that are present in carbon substrates interact with paramagnetic oxygen through a Heisenberg spin exchange. This interaction can be significantly reduced under STP conditions by flowing a diamagnetic gas over the carbon system. This manuscript describes a simple method to characterize the nature of those radicals.

While the first Electron Paramagnetic Resonance (EPR) studies regarding the effects of oxidation on the structure and stability of carbon radicals date back to the early 1980s the focus of these early papers primarily characterized the changes to the structures under extremely harsh conditions (pH or temperature)1-3. It is also known that paramagnetic molecular oxygen undergoes a Heisenberg spin exchange interaction with stable radicals that extremely broadens the EPR signal4-6. Recently, we reported interesting results where this interaction of molecular oxygen with a certain part of the existing stable radical structure can be reversibly affected simply by flowing a diamagnetic gas through the carbon samples at STP7. As flows of He, CO2, and N2 had a similar effect these interactions occur at the surface area of the macropore system.

This manuscript highlights the experimental techniques, work-up, and analysis towards affecting the existing stable radical nature in the carbon structures. It is hoped that it will help towards further development and understanding of these interactions in the community at large.

Substrates of varying (wt%) ratios of C/H/O atoms present different types and concentrations of stable radicals that are detectable via Electron Paramagnetic Resonance (EPR)8. These radicals depend on the structure of the macromolecules and are highly influenced by their aromatic nature. The EPR spectrum of coal radicals is characterized by a single broad resonance. In such cases, only the g-value, the line width and the spin concentration can be obtained. The g-values of EPR spectra can be used to determine whether a radical is carbon-centered or oxygen-centered. The basic equation for the electron Zeeman interaction

defines the g-value, where h is the Planck constant, v is the constant mw frequency applied in the experiment, B0 is the resonance magnetic field and βe is the Bohr magneton. For free electrons the g-value is 2.00232. Variations in the g-value from the 2.00232 are related to magnetic interactions involving the orbital angular momentum of the unpaired electron and its chemical environment. Organic radicals usually have g-values close to the free electron g, which depends on the location of the free radical in the organic matrix3,8-10. Carbon-centered radicals have g-values that are close to the free electron g-value 2.0023. Carbon-centered radicals with an adjacent oxygen atom have higher g-values in the range of 2.003-2.004, while oxygen centered radicals have g-values that are >2.004. The g-value of 2.0034-2.0039 is characteristic for carbon-centered radicals in a nearby oxygen heteroatom that results in increased g-values over that of purely carbon-centered radicals11-15. Line-width is governed by the spin-lattice relaxation process. Therefore, an interaction between adjacent radicals or between a radical and paramagnetic oxygen results in a decrease in the spin lattice relaxation time, and hence, an increase in the line-width4-6.

Stopped flow experiments with EPR detection allow the observation of time-dependent changes in the amplitude of an EPR signal at a distinct field value during the interaction of two phases by time sweep acquisition (kinetic display). The result of such a measurement is a rate constant for the formation, decay or conversion of a paramagnetic species. The procedure is analogous to the well-established case of stopped flow operation with optical detection in which a time-dependence of the optical absorption at a distinct wavelength is observed. Typically stopped flow experiments are conducted in a liquid state as radicals that are not EPR detected in liquid state due to short relaxation time T1, as e.g. hydroxyl (OH×) or superoxide (O2-) cannot be studied directly by EPR-stopped flow techniques. It is, however, possible to study the spin-adducts of these radicals with nitrones, yielding nitroxide-type radicals (spin-traps), as they are EPR-active and their kinetics can be monitored also by stopped flow EPR16-18.

The method of measurement of rates of chemical reactions using fast-flow gaseous techniques with EPR detection has also previously been established19-22. In essence, the method depends on the measurement, by EPR, of the concentration of a reactant as a function of distance (and thus at a constant velocity, the time) over which the reactant has been in contact with a reactive gas in the flow tube. Conditions whereby the concentration of the reactive gas is approximately constant are usually employed so that the measured decay is pseudo first order.

In the current work, a simple gas flow setup was implemented and a constant flow of gas was introduced to the surface of the solid carbon substrate.

With the method detailed in the current work we succeeded in achieving interesting results where this interaction of molecular oxygen with a certain part of the existing stable radical structure can be reversibly affected simply by flowing a diamagnetic gas through the carbon samples at STP. As a result of this method the removal of the interacting paramagnetic gas uncovers a new radical surface with a g value, which is closer to that of a free electron.

3. Setting Up the Flow System

When preforming the EPR experiments on various coal samples, as a function of the exposure time to a diamagnetic gas flow it was noted that during the gas flow, a second species at g~2.0028 appeared. This g-value is close to the value of a free electron and consistent with unsubstituted aliphatic carbon centered radicals. However, the total spin concentration for each sample remained constant within our experimental error (±10%). Figure 3A presents two scans: 0 sec and 1,900 sec after the coal sample had been exposed to CO2 gas (HA). The EPR spectrum at 1,900 sec is characterized by two species. One at g=2.004 with a line width of 5.5 G, and a second species, which is much narrower at g=2.0028, with a line width of 2.0 G. For HA, it was found that the rate of formation of this second species is ~500 sec (Figure 3B). However, the rate of formation of this second radical species is different for each coal sample, and was found to be within the range of 100-5,000 sec. Interesting, the extent of the formation of this second species, after stabilization is similar for all coal samples, and was evaluated as ~4-5% relative to the initial spin concentration. Whereas, the rest of the spins corresponds to either g~2.003-2.0032, carbon centered radicals (BA, SA), or g~2.004 (carbon centered radical with an adjacent oxygen atom). The different g-values of the dominant radical species in each sample is dependent on the nature of the coal, as was reported before8. After the gas flow was stopped, and the coal samples were exposed to air at aerobic conditions, during this time, the system went back to equilibrium, each coal sample with its own kinetics. Since, the kinetics of the formation of this second species for each coal sample is different, it should indicate on the sample's pores area and the surface functional groups. In order to better characterize these functional groups, other techniques such as BET and NMR are required to supplement the EPR data. 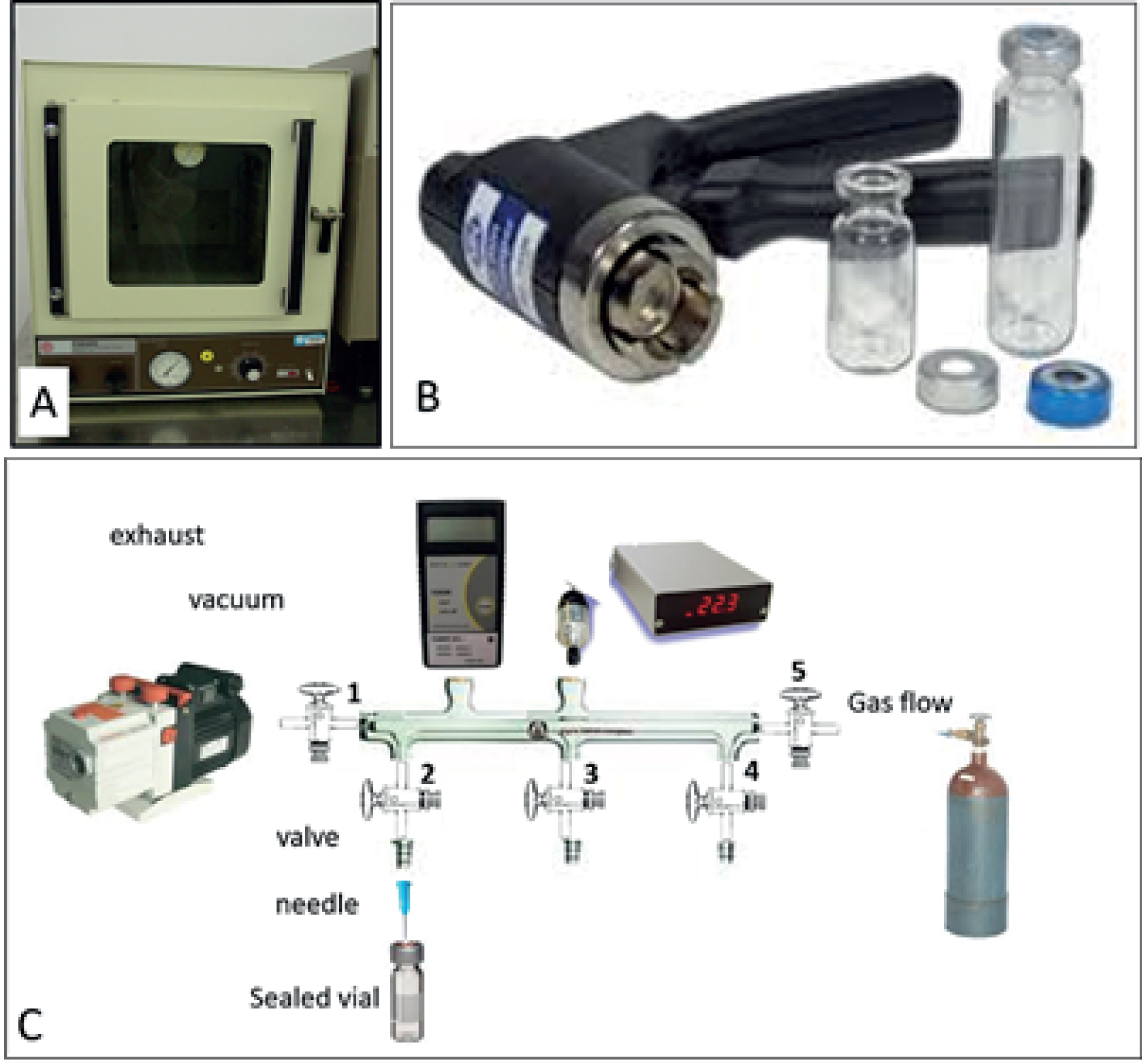 Figure 1. A. Vacuum oven for drying the samples. B. Sample vials. C. A custom made vacuum system. Please click here to view a larger version of this figure.

Figure 2. A. EPR quartz tube filled with carbon and closed with Teflon putty. Needles were inserted to allow gas flow. B. Gas system connected to the EPR quartz tube. C. The EPR quartz tube inside the high sensitivity probehead resonator. Please click here to view a larger version of this figure. 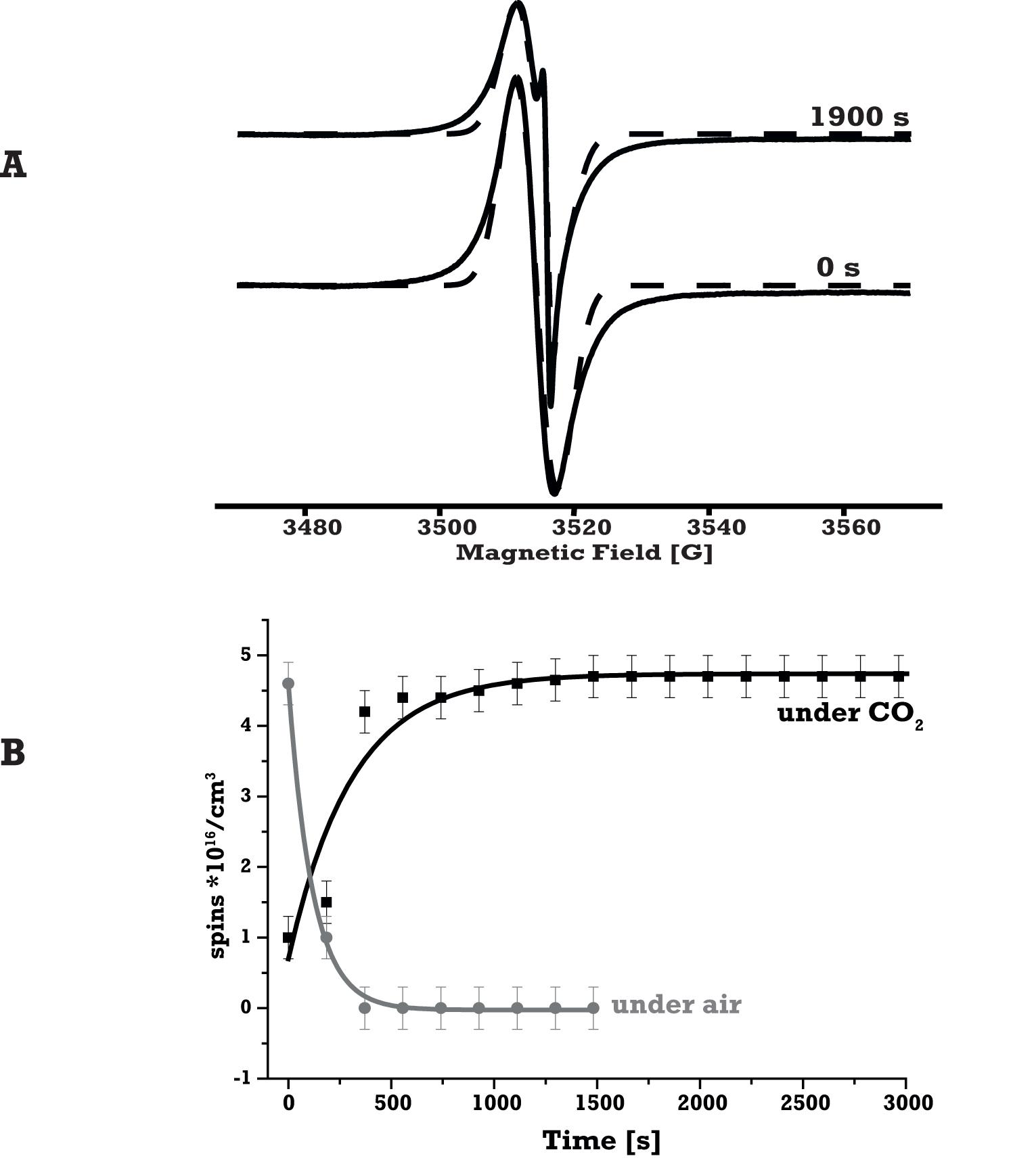 Figure 3. A. EPR spectra (solid lines) and simulations (dashed lines) of HA sample at aerobic conditions, 298 K, t=0 sec, and after been exposed to CO2 for 1,900 sec. B. The formation of the second radical species in HA due to an interaction with CO2. Reproduced by permission of Green et al.7

Surface oxidation of carbon materials is of significant industrial and academic interest. The effects of carbon substrate oxidation have been characterized with a wide range of analytical techniques including EPR. When investigating the interaction of molecular oxygen with carbon substrate such as coal which has a propensity to undergo oxidation (hence its main utilization as an energy resource) sample preparation and storage is extremely important.

Our samples are coal substrates that have been transported oversea in large cargo holds for the utilization in the energy industry. Even though the samples due undergo some oxidation during transport we attempt to hinder further oxidation by subsequently storing them under N2 and in a chilled area. As the samples adsorb water from the air prior to conducting measurements samples must always be dried under a vacuum at 60 °C for 24 hr.

While the method of measurement is straightforward the conditions and type of measurement had yet to have been reported prior to our work7. It is important to ensure that the samples are properly dried, and to calibrate the gas flow and pressure at the gas-solid interface in order to enable accurate estimation of the kinetics. In this respect more sophisticated setups such as those previously experimented with for gas flow experiments can be adapted to enhance our results19-22.

In order to ensure that the equilibrium is indeed reached, a sealed EPR tube with a carbon sample under vacuum or nitrogen environment must also be examined in order to determine the two limits cases. Careful manipulation of the setup, repetition of the experiment at various gas flow rates, does indeed lead to reproducible results.

It was found that the tuning conditions in the EPR spectrometer is not affected by the flow rate of the gas and the nature of the gas. The preparation of the coal samples step is critical, in order to remove absorbed water from the carbon substrates. Adsorbed water on the coal samples can dramatically affect the tuning conditions in the EPR spectrometer and reduce the signal to noise ratio. The method described here is good for evaluating oxidation rates on carbon samples and to characterize the nature of radicals and paramagnetic species in the samples. It is thus possible with this simple method to determine the interaction of a gaseous environment on the solid substrate and see the effect on the radical species and nature in the substrate. In order to get more information on the coal samples, such as pore sizes, compositions, surface functional groups, other techniques such as elemental analysis, gas chromatography, NMR, BET, and FTIR are supplemented. The method described here as might have a future applications in the development of cheap ultra-sensitive oxygen gas sensors, as well as a probe for determining the activity of active carbon scrubbers.

SR acknowledges the support of the Israel science foundation, grant no. 280/12. 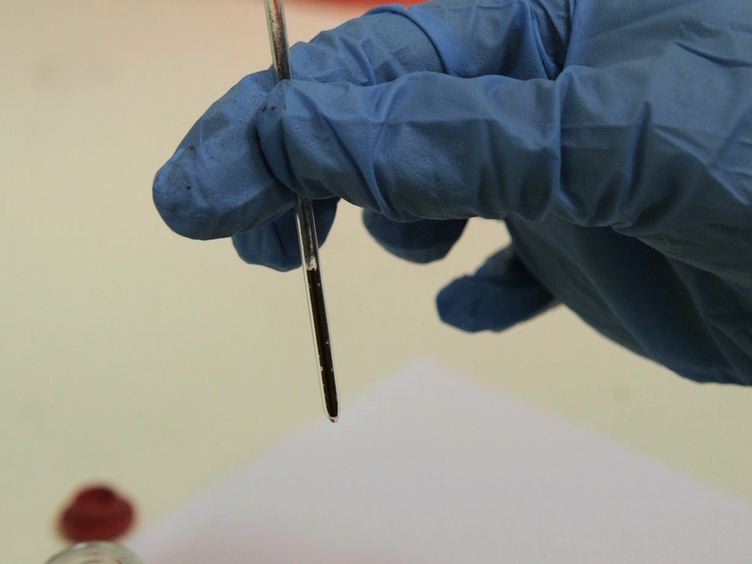