Muscle sensory neurons are involved in proprioceptor signaling and also report on metabolic state and injury related events. We describe an adult mouse in vitro muscle-nerve preparation for studies on stretch-activated muscle afferents.

Muscle sensory neurons innervating muscle spindles and Golgi tendon organs encode length and force changes essential to proprioception. Additional afferent fibers monitor other characteristics of the muscle environment, including metabolite buildup, temperature, and nociceptive stimuli. Overall, abnormal activation of sensory neurons can lead to movement disorders or chronic pain syndromes. We describe the isolation of the extensor digitorum longus (EDL) muscle and nerve for in vitro study of stretch-evoked afferent responses in the adult mouse. Sensory activity is recorded from the nerve with a suction electrode and individual afferents can be analyzed using spike sorting software. In vitro preparations allow for well controlled studies on sensory afferents without the potential confounds of anesthesia or altered muscle perfusion. Here we describe a protocol to identify and test the response of muscle spindle afferents to stretch. Importantly, this preparation also supports the study of other subtypes of muscle afferents, response properties following drug application and the incorporation of powerful genetic approaches and disease models in mice.

Skeletal muscles are innervated by sensory neurons that provide the central nervous system with important information about the muscle environment. Muscle spindles are highly specialized encapsulated structures composed of intrafusal muscle fibers that are located in parallel with extrafusal muscle fibers. Spindles are innervated by Group Ia and II afferents that encode changes in muscle length and intrafusal fiber tone is dynamically regulated by innervating gamma motor neurons1. Group Ib afferents are positioned between muscle fibers and their tendon insertions and are sensitive to changes in muscle force, for instance during muscle contraction2. The Group Ia, Ib and II afferents provide proprioceptive feedback that aids in appropriate motor control. Additional populations of muscle afferents located throughout the muscle (Group III and IV) serve to signal metabolite buildup, the presence of nociceptive stimuli, and muscle temperature3. This muscle sensory information is critical to maintaining homeostasis, preventing muscle damage and modulating movement. Muscle afferents can alter their firing patterns based on prior experience4. Activation of nociceptors can lead to the induction of chronic pain states5 and aberrant signaling from the muscle proprioceptors can lead to problems with balance or movement6. We use an isolated muscle-nerve in vitro preparation to study the response of muscle sensory neuron receptor endings from adult mice of both sexes (shown are responses from 2-4 month old C57Bl/6 mice). The mouse is the model genetic species for studies in mammals. This preparation requires the isolation of the deep peroneal branch of the sciatic nerve and the extensor digitorum longus (EDL) muscle, a fast twitch muscle of the peroneal group found in the lateral part of the lower leg. The EDL is often used to study muscle contractile properties7-9, has tendons that are easy to isolate and is small enough to allow adequate diffusive oxygen supply at rest and with reasonable contraction duty cycles10. Other muscles in this area (for instance soleus and tibialis anterior) are of similar size and this preparation could be easily modified to record from afferents from these muscles. A suction electrode is placed onto the cut end of the nerve to record muscle sensory afferent firing. Individual neurons can be identified and analyzed based on their spike shape using spike sorting software. Stimulating electrodes in the bath or on the nerve can be used to evoke muscle contraction. Muscle length and force can be controlled and measured using commercially available systems. Similar in vitro preparations have been used in rodents to study Group III and IV muscle afferents in the rat EDL11, Group Ia and II spindle afferents in the rat fourth lumbrical toe muscle12 and Group III and IV muscle afferents in the mouse plantar muscle13.

An in vitro system has the advantages of pharmacological accessibility and direct control of perfusate and physiochemical variables like temperature and pH. An in vitro approach eliminates the potential in vivo confounds of anesthesia and muscle perfusion status. While the muscle-nerve preparation allows for the study of the direct response of a perturbation on the afferents, the ability to study gamma efferent modulation of spindle sensitivity and other integrated responses that is possible with in vivo14 or ex vivo3 preparations is sacrificed as there are no neuronal cell bodies in this preparation.

Appropriate national and institutional ethics should be obtained before performing animal experiments.

1. Removal of EDL Muscle and Nerve

2. Mounting of the EDL Muscle and Nerve into the Tissue Bath (Figure 1A) 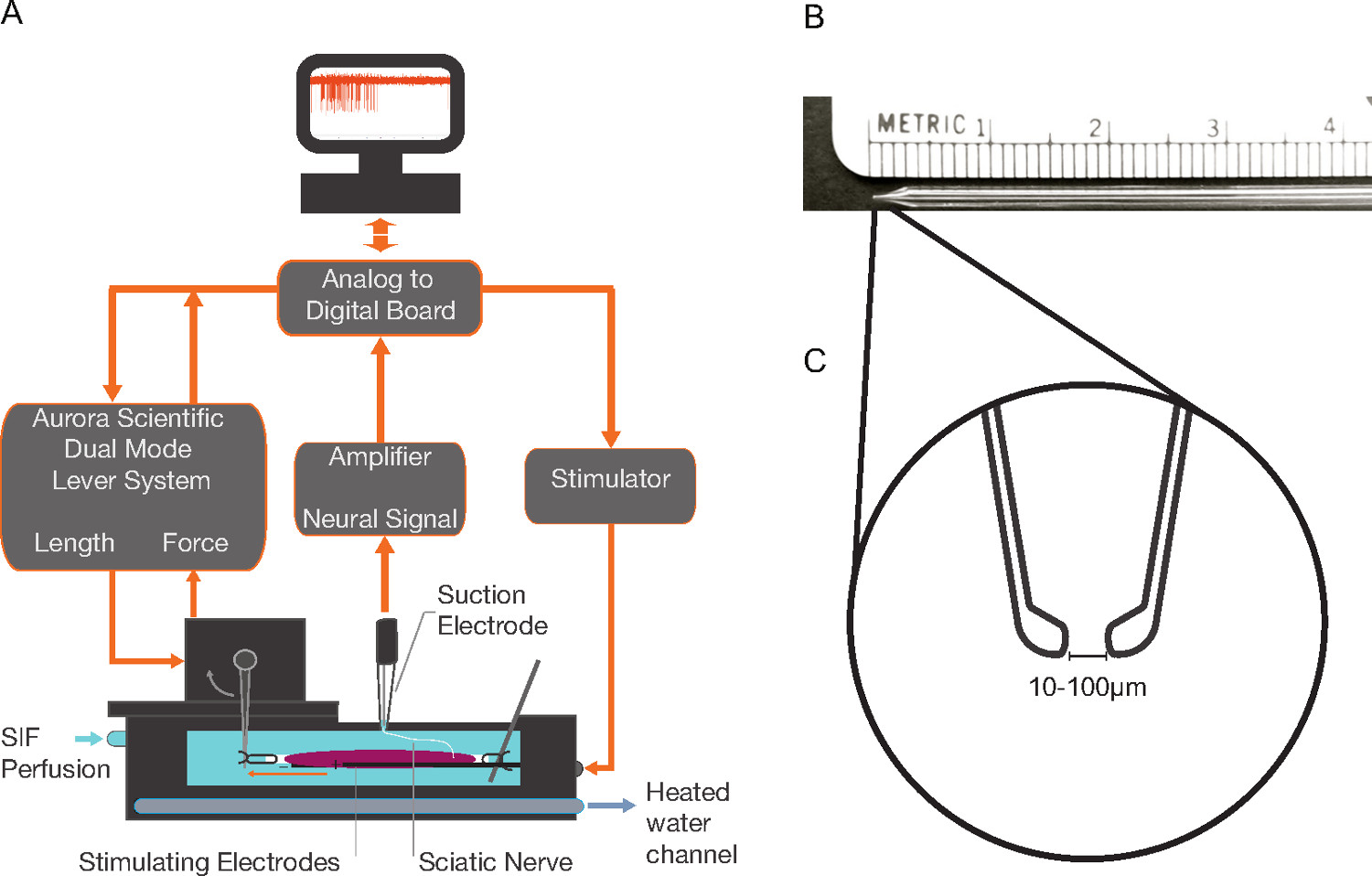 Figure 2. Spindle Afferent Response to Twitch Contraction. Neuronal activity (top trace) and muscle tension (bottom trace) from 30 twitch contractions are superimposed with top overlapping trace in black. Afferent activity pauses during contraction-induced tension increase, which is a characteristic response of muscle spindle afferents. Bracket and arrow above the top trace denote the time during contraction when activity is paused.

Figure 3. Spindle Afferent Response to Ramp and Hold Stretch A) Raw neural activity of two afferents (top trace) during a ramp and hold stretch applied to the EDL (muscle length shown in bottom trace). B) Instantaneous firing frequency (Inst. Fr., impulses per sec) of the unit exhibiting activity at Lo from A (shown in blue). C) Instantaneous firing frequency of the smaller unit that only fires during the stretch (shown in orange). Both units exhibit the spike frequency adaptation during stretch that is characteristic of muscle spindle afferents1.

The goal of this article was to describe a method for recording from muscle spindle afferents in an isolated mouse muscle-nerve preparation. We have found that mouse spindle afferents respond similarly to stretch as those from rats, cats and humans15, and other laboratories have used mice as model organisms to study sensory neurons in both the muscle and the skin in vitro (for example3,13) .

Muscle sensory afferents can be recorded for at least 6-8 hr at both 24 °C and 34 °C. To minimize handling the EDL and nerve, use the remaining portion of the FHL to handle the tissue whenever possible. Following the dissection, wait at least 1 hour to start data collection to allow the tissue to equilibrate to bath temperature and for normal synaptic transmission to recover. Previously, muscle health was verified on a subset of muscles used in this preparation by determining that the maximal tetanic contractile force generated by the muscles is similar to that reported by others at the beginning and end of the experiment15.

Muscle spindle afferents were identified functionally in this preparation by looking for a characteristic pause in firing in response to twitch contraction (Figure 2) as well as the expected instantaneous frequency increases in response to length changes (Figure 3). In our experience, most afferents that fire in control conditions are muscle spindle afferents. The length of the nerve retained in this preparation (~7 mm maximum) is not long enough to use afferent conduction velocity differences to identify muscle afferent subtypes13. Additionally, unlike in cats and humans, measures of dynamic sensitivity were not able to clearly differentiate Group Ia and II afferents in mice (for further discussion see Wilkinson et al.15). Other subtypes of afferents (i.e., Group III and IV) can be identified using additional functional tests in this preparation, for instance by adding substances like capsaicin, ATP, or bradykinin, decreasing bath pH, exposing the muscle to ischemia, etc.3,13,21-23 Using suction electrodes allows the activity from multiple sensory neurons to be recorded at once, which increases the amount of data that can be collected from a single muscle. This preparation can be used to gauge the overall effect of a perturbation on sensory neuron population responses or the responses of identified afferents. If the spike shapes are unique enough, up to 4 sensory neurons can be discriminated by software (both Spike2 (Cambridge Electronic Design) and LabChart Pro (AD Instruments) have performed similarly). In cases where neurons cannot be discriminated, changes in electrode placement or tip diameter can easily be implemented.

In summary, the mouse muscle-nerve in vitro preparation is a simple experimental approach that can be used to investigate the response properties of muscle sensory afferents to various physicochemical perturbations, injury and disease models. Additionally, this preparation is ideally suited to take advantage of the powerful genetic tools available in mice, including transgenic animals and optogenetic tools.

The open access charges for this manuscript have been paid by Aurora Scientific, Inc., the company that makes the force and length controller and in vitro bath plate used in this manuscript.

This work was supported by a California State University Program for Education and Research in Biotechnology (CSUPERB) New Investigator Grant (KAW), a grant from Pfizer (WS753098, SH), and an NIH MARC fellowship (#2T34GM008253-21, JAF). The authors would like to thank Michael Sawchuk, Anusha Allawala, Nina Bubalo, Remie Mandawe and Peter Nguyen for their technical support. 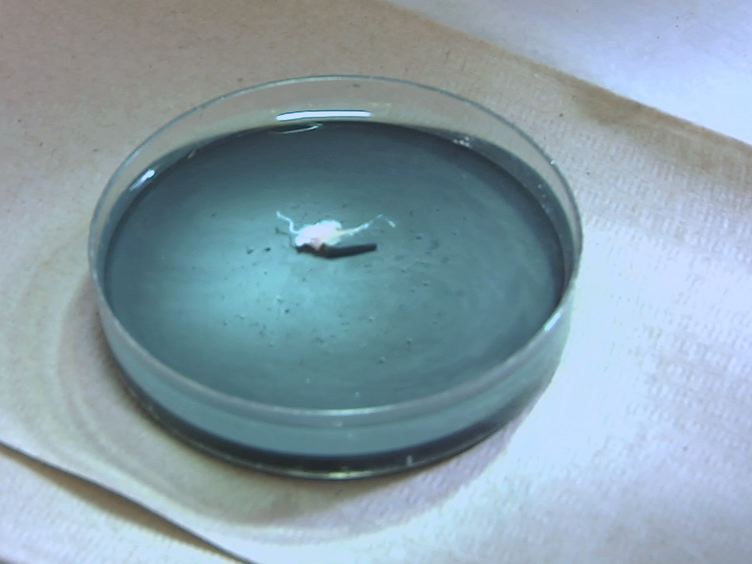