This manuscript describes a rodent model to study trigeminal neuropathic pain. The methods described include surgical procedures to perform a chronic constriction injury of the rat’s infraorbital nerve and the post-surgical behavioral tests to measure the changes in spontaneous and evoked behavior that are indicative of persistent pain and allodynia.

Animal models are important tools to study the pathophysiology and pharmacology of neuropathic pain. This manuscript describes the surgical and behavioral procedures to study trigeminal neuropathic pain in rats. To meet the specificity of trigeminal neuropathic pain syndromes, the infraorbital nerve (IoN) is subjected to a chronic constriction injury (CCI) by loosely ligating the nerve. An intra-orbital approach is presented here to expose and ligate the IoN in the orbital cavity. After IoN ligation, rats exhibit changes in spontaneous behavior and in response to von Frey hair stimulation that are indicative of persistent pain and mechanical allodynia. Two phases can be defined in the development of the behavioral changes. During the first week following IoN-CCI (phase 1), rats show an increased and asymmetric face grooming activity, i.e., with face wash strokes primarily directed to the nerve-injured IoN territory. A distinction is made between face grooming behavior that is part of a more general body grooming behavior, which remains largely unaffected by IoN-CCI, and face grooming that is neither preceded nor followed by body grooming, which is significantly increased after IoN-CCI. During this period, responsiveness to mechanical stimulation of the IoN territory is reduced. This hyporesponsiveness is abruptly replaced by an extreme hyperresponsiveness whereby even very weak stimulus intensities provoke nocifensive behavior (phase 2). The phenomenological similarities between these behavioral alterations and reported signs of facial pain (i.e., responses to noxious stimulation of the face) suggest the presence of dysesthesia/paresthesia and mechanical allodynia in the ligated IoN territory.

Damage to somatosensory nerves most often leads to loss of sensation. It is not very well understood why and how, in some cases, peripheral nerve damage leads to chronic pain. As a result, painful neuropathies remain a challenging condition to treat1 and result in substantial reductions in patients’ quality of life2-3. Animal models are an important tool to examine the efficacy of existing and newly developed drugs and to identify the pathophysiological mechanisms involved in the development and maintenance of neuropathic pain. Among the key challenges for translational pain research is identifying and measuring spontaneous pain in animals (i.e., physiological, behavioral or other manifestations that indicate the presence of pain in animals that are not being challenged with probing stimulations that are acutely superimposed on the subject’s basal condition). The overall goal of this procedure is to surgically induce an infraorbital nerve injury in a rat that leads to the development of both spontaneous and evoked nocifensive behavior that can used to study the mechanisms involved in trigeminal neuropathic pain and its treatment.

Directed, isolated face grooming is a unique measure of spontaneous neuropathic pain in rats. Following chronic constriction injury (CCI) of the infraorbital nerve (IoN), rats exhibit changes in spontaneous behavior and in response to tactile stimulation that are indicative of persistent pain and mechanical allodynia4. Following IoN-CCI, rats show an increased and asymmetric face grooming activity, i.e., with face wash strokes primarily directed to the nerve-injured IoN territory. In contrast to noxious stimulation of the face (e.g., formalin injection)5, non-painful sensory disturbances (i.e., unilateral vibrissae clipping, anesthetic infraorbital nerve blockade, application of mineral oil on vibrissae) did not or only very briefly (i.e., the first minutes after onset) induce a significant change in face grooming behavior6. It was concluded that this abnormal grooming after IoN-CCI is a behavioral manifestation of spontaneous, strongly aversive sensations in the injured nerve territory. This behavior in IoN-CCI rats bears strong resemblance to spontaneous pain observed in patients. Further studies have identified an important difference between face grooming behavior that is part of a more general body grooming behavior (i.e., “face grooming during body grooming”), which remains largely unaffected by IoN-CCI, and nocifensive face grooming that is neither preceded nor followed by body grooming (i.e., “isolated face grooming”), which is significantly increased after IoN-CCI7-9. Pharmacologically, face grooming during body grooming constitutes an excellent control measurement for non-specific drug effects (e.g., sedation) that may impair motor function. Movements of the forelimbs during the two types of face grooming are exactly the same.

Following IoN-CCI, rats also exhibit changes in response to tactile stimulation that are indicative of mechanical allodynia4, 10. During the first week(s) after IoN-CCI, rats no longer respond to mild or moderate tactile (i.e., von Frey) stimuli. This hyporesponsiveness is then abruptly replaced by an extreme hyperresponsiveness whereby even very weak stimulus intensities provoke nocifensive behavior. The onset of hyperresponsiveness may vary between rats, but most rats have become hyperresponsive after three to four weeks post-operative.

Ethics statement: Animals are treated and cared for according to the guidelines of the Committee for Research and Ethical Issues of IASP11. The protocol is approved by the institutional Ethical Committee.

IoN-CCI rats show a strong post-operative increase in the amount of time spent on isolated face grooming (Figure 1). The increase peaks at the end of the first post-operative week and then declines during the following weeks. Most recent studies have found face grooming to be significantly increased for up to three weeks. Face grooming behavior in sham operated rats is more or less unaffected. 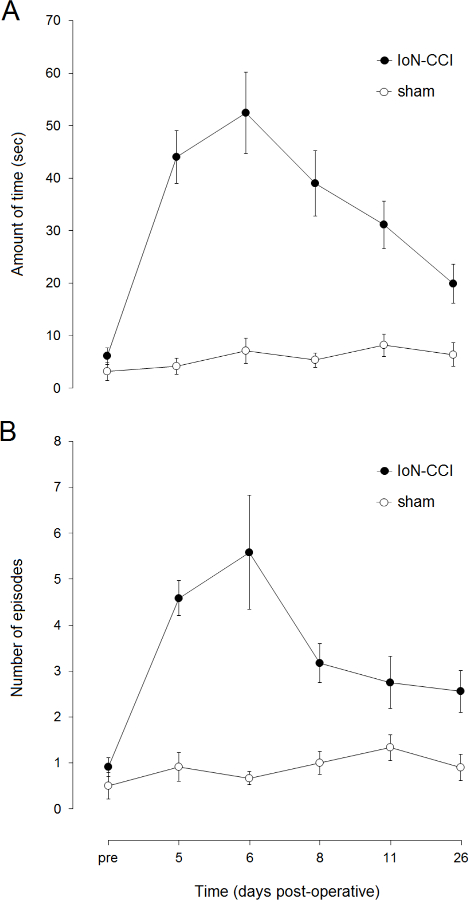 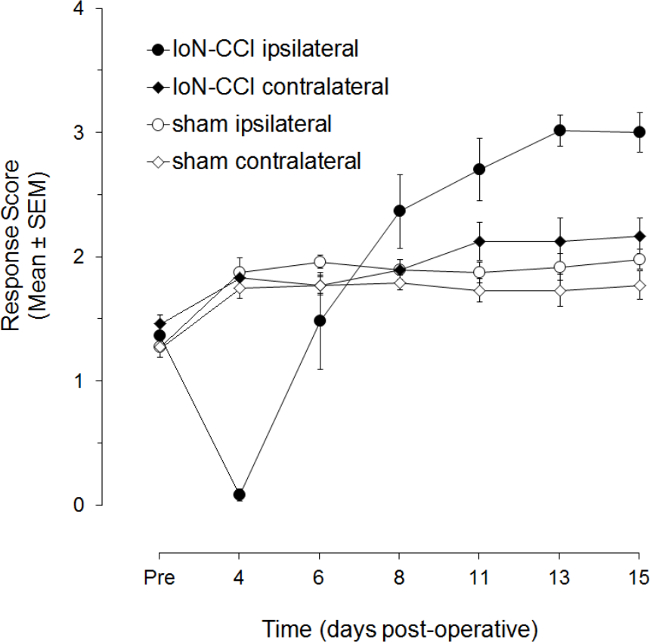 The most interesting aspect of the IoN-CCI model is that it provides a unique measure of spontaneous, non-evoked (neuropathic) pain. Most animal studies of neuropathic pain, using spinal nerve models, exclusively address nocifensive behaviors (e.g., vocalization and withdrawal responses), reflecting hypersensitivity to mechanical or thermal stimulations12. However, the chief clinical complaint in patients is ongoing pain, not hyperalgesia or allodynia13.

Considering the close proximity of the surgical field to the mouth of the rat, anesthesia via i.p. injection (i.c. pentobarbital) was chosen over inhalation anesthesia (e.g., isoflurane). However, given the disadvantages of pentobarbital such as risk of overdose, respiratory depression, buildup of fluids in the upper respiratory tract, other anesthetic drugs or even inhalation anesthesia via a gas anesthesia mask for stereotaxic frames, may be considered. In our experience, careful dosing, timely administration of atropine as soon as the animal becomes anesthetized (even partially), proper maintenance of body temperature, and aspiration of fluids from the upper respiratory tract minimizes the risks associated with pentobarbital.

Variability between IoN-CCI rats in the amount of face grooming behavior may be quite high. Recently, it has been shown that part of this variability can be eliminated by observing rats more frequently9. Twice daily observations significantly increased the statistical power, reducing the number of animals needed. Responses to von Frey hair stimulation of the IoN territory are categorized according to a series of rank-ordered descriptive response categories (cf. supra). It may be considered a drawback that the data should be analyzed nonparametrically and represented by nonparametric measures of central tendency (e.g., median) and of variation (e.g., interquartiles). It has been argued that the results of parametric analysis show a very good accordance with those of nonparametric analysis and that median scores fail to appropriately visualize the effects of experimental conditions on response scores10.

The main applications of the IoN-CCI model are in the pharmacological testing of existing or newly developed analgesic drugs, the development of new therapeutic strategies and the study of the pathophysiological mechanisms involved in the development and maintenance of (trigeminal) neuropathic pain.

The authors acknowledge the work that was done by the first author of the IoN-CCI model, Bart Vos†. 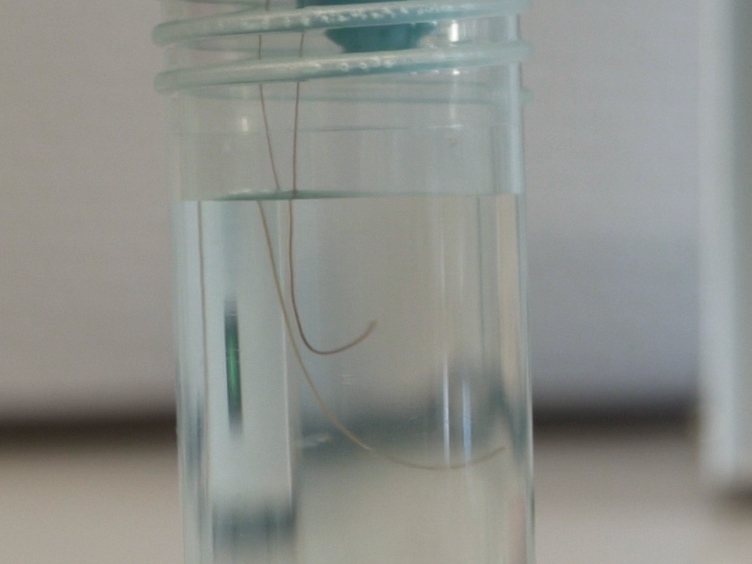