Here, we present a protocol to obtain adaptive laboratory evolution of microorganisms under conditions using chemostat culture. Also, genomic analysis of the evolved strain is discussed.

Natural evolution involves genetic diversity such as environmental change and a selection between small populations. Adaptive laboratory evolution (ALE) refers to the experimental situation in which evolution is observed using living organisms under controlled conditions and stressors; organisms are thereby artificially forced to make evolutionary changes. Microorganisms are subject to a variety of stressors in the environment and are capable of regulating certain stress-inducible proteins to increase their chances of survival. Naturally occurring spontaneous mutations bring about changes in a microorganism's genome that affect its chances of survival. Long-term exposure to chemostat culture provokes an accumulation of spontaneous mutations and renders the most adaptable strain dominant. Compared to the colony transfer and serial transfer methods, chemostat culture entails the highest number of cell divisions and, therefore, the highest number of diverse populations. Although chemostat culture for ALE requires more complicated culture devices, it is less labor intensive once the operation begins. Comparative genomic and transcriptome analyses of the adapted strain provide evolutionary clues as to how the stressors contribute to mutations that overcome the stress. The goal of the current paper is to bring about accelerated evolution of microorganisms under controlled laboratory conditions.

Microorganisms can survive and adapt to diverse environments. Under severe stress, adaptation can occur via acquisition of beneficial phenotypes by random genomic mutations and subsequent positive selection1-3. Therefore, microbial cells can adapt by changing metabolic or regulatory networks for optimal growth, which is termed "adaptive evolution". Recent important microbial tendencies, such as outbreaks of superbugs and the occurrence of robust microbial strains, are very closely related to adaptive evolution under stressful conditions. Under defined laboratory conditions, we are able to study the mechanisms of molecular evolution and even control the direction of microbial evolution for various applications. Unlike multicellular organisms, single-celled organisms are well suited to adaptive laboratory evolution (ALE) for the following reasons: they regenerate quickly, they maintain large populations, and it is easy to create and maintain homogeneous environments. Combined with recent advances in DNA sequencing techniques and high-throughput technologies, ALE allows for the direct observation of genomic changes that lead to systemic regulatory changes. Mutational dynamics and a diversity of the population are also observable. Genetic engineering strategies can be determined from the analysis of ALE strains4,5.

Chemostat culture is a method used to obtain steady-state cells and increase productivity in fermentation processes6. Fresh medium is added and culture broth is harvested during the process (the latter includes medium and biomass). Long-term chemostat culture, however, changes the steady-state productivity of the culture and brings about the accumulation of spontaneous mutations and selection during culture (Figure 1a). Under various selection pressures (stressors), the accumulation of mutations is enhanced. A gradual increase of stress in a long-term chemostat provides for a continuous selection of mutations that work against the given stressors, such as temperature, pH, osmotic pressure, nutrient starvation, oxidation, toxic end products, etc. Colony transfer from a solid medium and serial transfer from a liquid medium (repeated batch culture) also allow researchers to obtain evolved microorganisms (Figure 1b and 1c). Although chemostat culture requires complicated methods, the pool of diversity (number of replications and population size) is higher than that obtained by colony transfer and serial transfer techniques. The stable stress exposure to individual cells and decreased variation in the cellular state during chemostat culture (steady state) are other benefits of ALE compared to batch culture-based techniques. Stress-induced ALE of Escherichia coli subjected to high succinate conditions is introduced in this article. 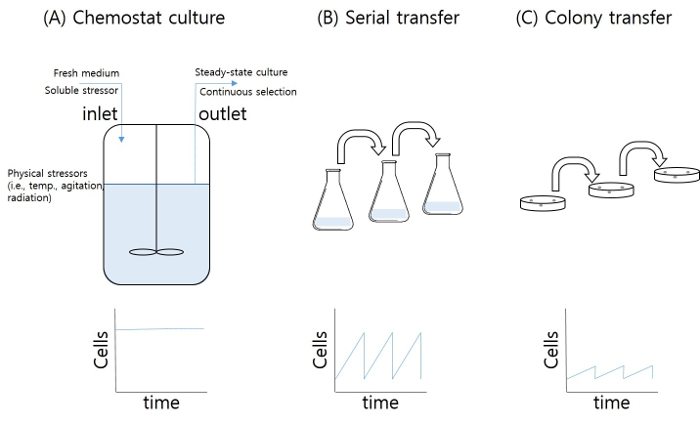 5. Single-colony Isolation of the Stress-adapted Strain 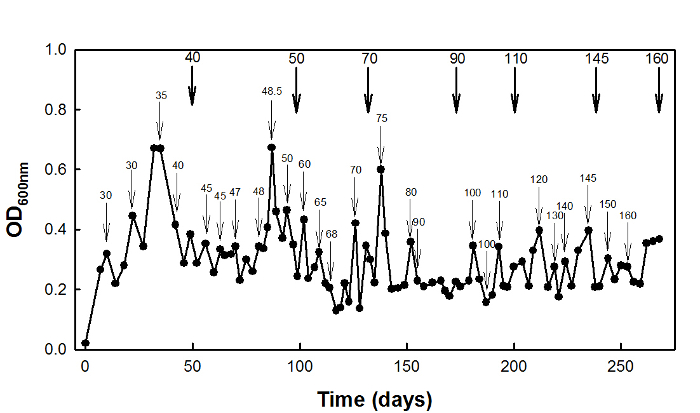 An initial stressor concentration of 30 g/L (disodium succinate hexahydrate) was gradually increased whenever the chemostat culture reached a steady state, until the concentration of stressor was 160 g/L. The adapted E. coli DST160 strain (tolerant to 160 g/L of disodium succinate stress) was acquired after 270 days. The DST160 strain exhibited uninhibited growth under high-succinate stress (160 g/L stressor), while the ancestor strain (W3110) showed nearly no growth (Figure 3). 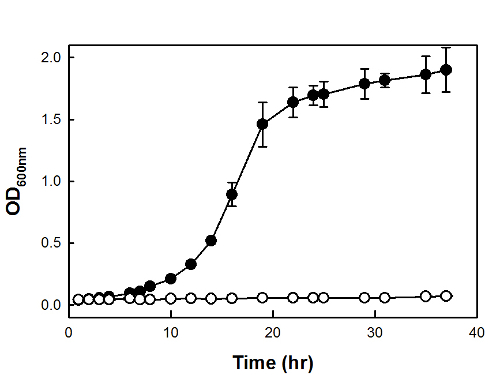 Figure 3: Growth curves of the wild-type (W3110, white circle) and adapted strain (DST160, black circle) under high-succinate stress. The figure shows that the adapted strain grew without delay under high-succinate stressed conditions while the wild type did not. The error bars indicate standard deviation of three independent experiments. The figure was modified from J. Biosci. Bioeng7. Please click here to view a larger version of this figure.

Microorganisms are capable of adapting to almost all environments because of their rapid growth rate and genetic diversity. Adaptive laboratory evolution enables microorganisms to evolve under designed conditions, which provides a way of selecting individual organisms harboring spontaneous mutations that are beneficial under the given conditions.

The chemostat technique is more robust for achieving artificially driven evolution than transfer techniques for the following reasons: (a) a steady environment — because transfer techniques are based on batch cultures either on solid or in liquid medium, the environment of the cells varies during batch culture while the environmental stress of the chemostat is steady; (b) a larger population and a continuous selection — the larger population of the chemostat provides more genetic diversity than the smaller population of transfer techniques. Continuous selection of the chemostat technique is a faster way to achieve evolution than intermittent selection of transfer techniques. It is critical that the chemostat culture not be contaminated by other microorganisms during the ALE procedure, and aseptic conditions are required throughout chemostat culture. The ALE procedure can be modified by changes to stressors, such as oxidative stress, osmotic stress, and toxic product stress. There are a few technical limitations to ALE by chemostat culture. Evolution takes place by chance; therefore, different researchers may not be able to obtain the same evolutionary result, although the consequences of mutations might be related. Another limitation is the wash-out of chemostat culture when the concentration of stressor is increased too quickly. If the biomass is decreased to a certain amount (i.e., O.D. = 0.2 in this procedure) after the concentration of stressor is increased, administration of the stressor should be halted for at least a few generations to give the strain time to adapt.

Recent developments in genome sequencing technology have helped the understanding of mutations that develop in response to certain stressful conditions. For example, a DNA mutation alters a particular systemic effect that is beneficial to the given environment (i.e., tolerance to a toxic stressor). Thus, ALE may be used to study gene function or network regulation, or as a raw material for 'accelerated evolution'. ALE studies are also useful in simulating the development of antibiotic-resistant bacteria, indicating the mechanisms by which dangerous drug-resistant bacterial strains arise. As the trajectory of evolution is engraved on the genome, uncovering the genetic alterations that lead to the desired phenotypes (such as stress tolerance) is the next obstacle once evolved strains are obtained8. Among the currently available next-generation sequencing technologies, the Illumina and Ion Torrent platforms are suitable for the detection of nucleotide substitutions or small indels that occur in the evolved strains, and both are affordable. Because variant detection usually involves short-read mapping of the reference sequences, the availability of the genome sequence of the ancestral strain is crucial. Even if the genome sequence of the founder strain is available from public databases, it is often desirable to sequence it simultaneously with the evolved one, because there might be some additional differences in the actual starting strain. Protocols for mutation identification are easily available via the web or a literature search9,10. For example, BRESEQ is a specially-designed pipeline for genomic analysis of laboratory-evolved microbes using next-generation sequencing data11. Comparisons of the evolved strains at certain milestones (for example, in this representative data, wild type, DST50, DST100, and DST160) can provide the sequence of the evolved strains and give insight into the consequences of a given stressor. Therefore, knowledge and applications of ALE experiments, coupled with system biology and the identification of systemic perturbation variables, are expected in the near future.

This study was financially supported by the Korean Ministry of Science, ICT and Future Planning (Intelligent Synthetic Biology Center program 2012M3A6A8054887). P. Kim was supported by a fellowship from the Catholic University of Korea (2015). 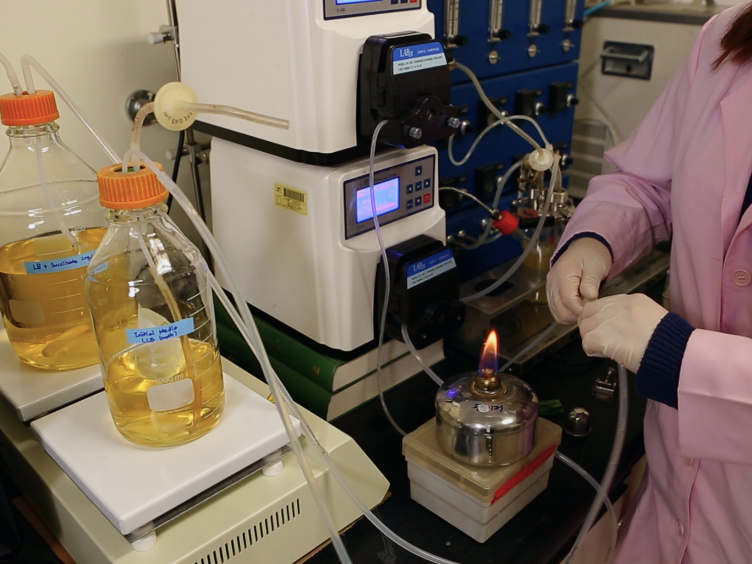