Sustainable economic development requires not only using feedstocks that are renewable and biodegradable but also uses green and environmental friendly manufacturing technologies to produce a variety of bioproducts and biochemicals from these renewable feedstocks. Cellulose nanomaterials, such as cellulose nanocrystals (CNC) and cellulose nanofibrils (CNF), produced from renewable lignocelluloses are biodegradable and have unique mechanical and optical properties suitable for developing a range of bioproducts 1, 2. Unfortunately, existing technologies for producing cellulose nanomaterials are either energy intensive when using pure mechanical fibrillation or environmentally unsustainable due to non-recycling or insufficient recycling of processing chemicals, such as when using the concentrated mineral acid hydrolysis process 3-8 or oxidation methods 9-11. Furthermore, oxidation methods may also produce environmentally toxic compounds by reacting with lignocelluloses. Therefore, developing green manufacturing technologies for producing cellulose nanomaterials is critically important to make full use of the abundant and renewable material - lignocelluloses.

Using acid hydrolysis to dissolve hemicellulose and depolymerize cellulose is an effective approach for producing cellulose nanomaterials. Solid acids have been used for sugar production from cellulose with the advantage of easing acid recovery 12, 13. Previous studies using concentrated mineral acids indicated that a lower acid concentration improved CNC yield and crystallinity 3, 5. This suggests that a strong acid may damage cellulose crystals while a milder acid hydrolysis might improve the properties and yield of cellulose nanomaterials through the approach of integrated production and CNC with CNF 3, 14. Here we document a method using concentrated solid dicarboxylic acids hydrolysis to produce CNC along with CNF 15. These dicarboxylic acids have low solubility at low or ambient temperatures, and therefore they can be easily recovered through the mature crystallization technology. They also have good solubility at elevated temperatures which facilitates concentrated acid hydrolysis without boiling or using pressure vessels. Since these acids also have a higher pKa than typical mineral acids used for CNC production, their use results in good CNC crystallinity, and despite lower CNC yields, with a substantial amount of fibrous cellulosic solid residue (FCSR or partially hydrolyzed fibers) remaining due to incomplete cellulose depolymerization. The FCSR can be used to produce CNF through subsequent mechanical fibrillation using low energy inputs. Therefore, cellulose loss to sugars is minimal as compared to using mineral acids.

It is well known that carboxylic acids can esterify cellulose through Fisher-Speier esterification 16. Applying dicarboxylic acids to cellulose can result in semi-acid un-crosslinked esters 17 (or carboxylation), to produce carboxylated CNC and CNF as we demonstrated 15 previously. The method documented here can produce carboxylated and thermally stable CNF and CNC that is also highly crystalline from either bleached or unbleached pulps while having relatively simple and high chemical recovery and using low energy inputs.

NOTE: Bleached eucalyptus kraft pulp (BEP) and unbleached mixed hardwood kraft pulp (UMHP) fibers from commercial sources were used as feedstock for producing CNC and CNF. Commercial maleic acids purchased were used for hydrolysis. Hydrolysis conditions were acid concentrations of 60 wt% at 100 °C for 60 min and 120 °C (no boiling at atmospheric pressure) for 120 min, for BEP and UMHP, respectively.

Typical AFM images of the CNC and CNF from BEP and UMHP along with corresponding SEM images of the feed acid hydrolyzed fibers are shown in Figures 1 and 2. The images clearly show the substantial reductions in fiber length by acid hydrolysis with minimal change in fiber diameters (comparing Figure 1a with 1b, and 2a with 2b). The shortened fiber length was also reflected by the measured cellulose degree of polymerization (DP) of the hydrolyzed fibers. DP was reduced from 1,021 and 806 to 319 and 342, for the BEP and UMHP, respectively. CNCs isolated from the hydrolyzed fiber had relatively longer lengths and thicker diameters compared with the typical length and diameter of concentrated sulfuric acid produced CNCs cited in the literature 5; this is perhaps due to the weak strength of maleic acid. The mean CNC lengths and diameters measured by AFM image were 239 and 33 nm, 336 and 39 nm for the two samples shown in Figures 1c and 2c, respectively.

The weak strength of maleic acid also resulted in a substantially low CNC yield of 1.8% and 5.5% from BEP and UMHP, respectively. However, the remaining solids, i.e., FCSR, still have utility and were used to produce CNF through subsequent mechanical fibrillation to achieve the integrated production of CNC with CNF. CNC yield can be increased by using more severe reaction conditions as demonstrated previously 15. Depending on the application and economics, the severity can be adjusted to accommodate the desired CNC to CNF ratio.

The CNFs had a very long lengths based on AFM image measurements while actually having thinner diameters than their corresponding CNCs as (comparing Figure 1c with 1d, and 2c with 2d). It is felt these CNF's would be ideal for polymer reinforcement in composite applications. 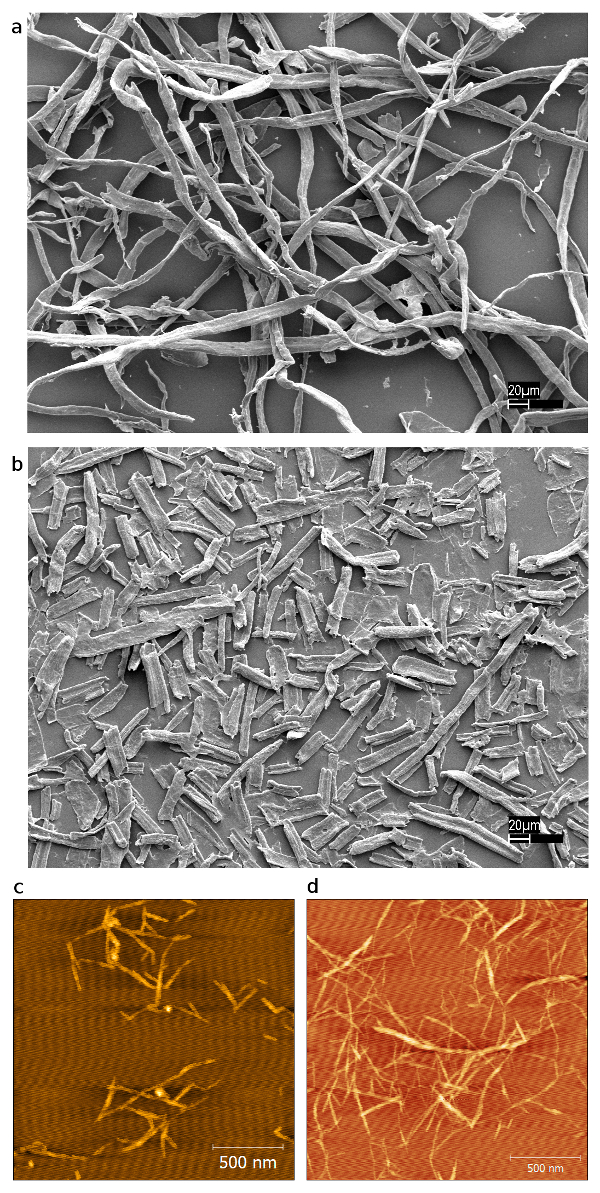 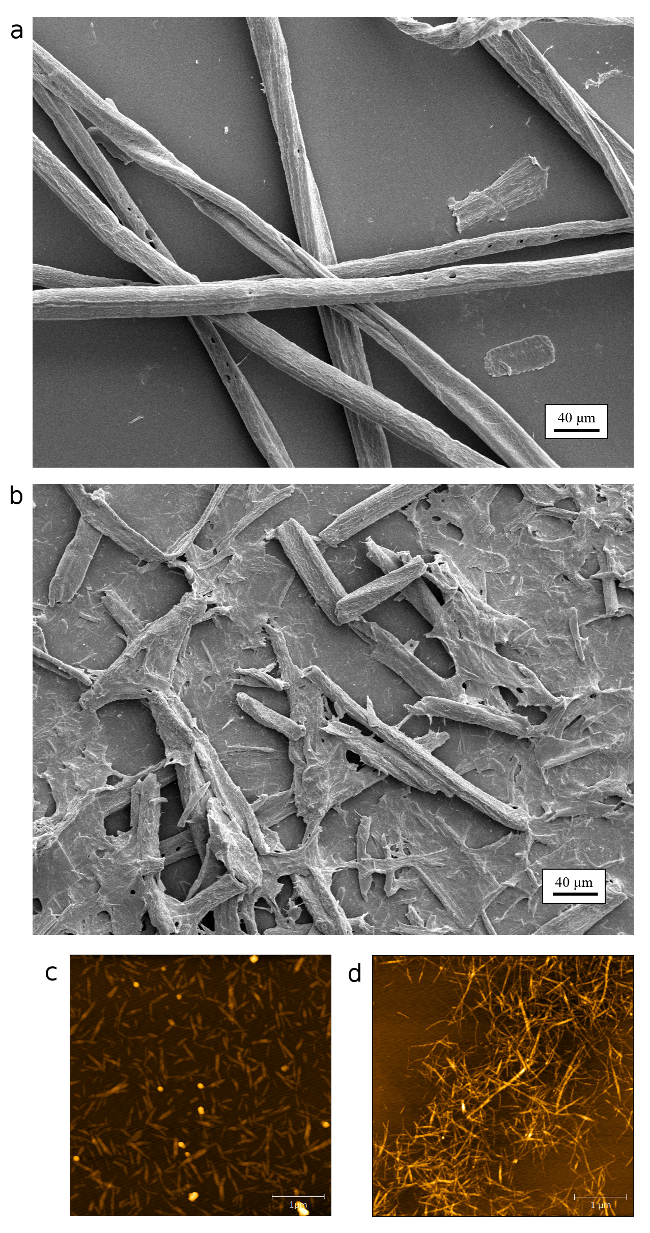 Lignin particles were visible on the CNC sample from UMHP. Lignin should also chemically bound to CNC particles. It will be interesting to see the effect of lignin on surface hydrophobicity in future studies for a variety of applications.

Due to the presence of carboxyl group, the CNC samples were easily dispersible as shown in Figures 1c and 2c, which facilitates aqueous processing. The surface charges measured by zeta potential were -13 and -34 mV, for the CNCs from BEP and UMHP, respectively.

Thermal stability of the CNC and CNF samples were similar to those found in the feed fibers. This is important for applications requiring thermal processing at elevated temperatures such as extrusion for composite production. The improved thermal stability was attributed to the improved crystallinity.

Critical steps in the protocol are as follows. With the preparation of acid solution of desired concentration (section 1), one needs to use the density data presented in our early work 15 to calculate the amount of salt needed to make the acid solution of desired concentration. For CNC separation (section 3), multiple steps of centrifugation and filtration may be needed. Dialysis is needed to separate CNC particles.

The presented process for producing cellulose nanomaterials is also suitable for nonwoody lignocellulosic materials. The method is relatively straightforward. Troubleshooting should be focused on making sure that the critical steps described above are carried out correctly.

The significance of the present process compared with traditional mineral acid hydrolysis or oxidation processes are (1) the resultant CNC and CNF are thermally stable and (2) the minimal loss of cellulose top sugars. Also, the acid can be easily recycled to achieve environmental sustainability and reduce production cost. There are no potential harmful products to be produced as the acid is used as a catalyst when compared with oxidation method.

Chen and Zhu are co-inventors of a US patent application using dicarboxylic acids for CNC and CNF production.

This work was conducted while Bian, Chen, and Wang were visiting Ph.D. students at the US Forest Service, Forest Products Laboratory (FPL), Madison, WI, and on official government time of Zhu. This work was partially supported by the USDA Agriculture and Food Research Initiative (AFRI) Competitive Grant (No. 2011-67009-20056), the Chinese State Forestry Administration (Project No. 2015-4-54), the National Natural Science Foundation of China (Project No. 31470599), Guangzhou Elite Project of China, and China Scholarship Fund. Funding from these programs made the visiting appointments of Bian, Chen, and Wang at FPL possible. 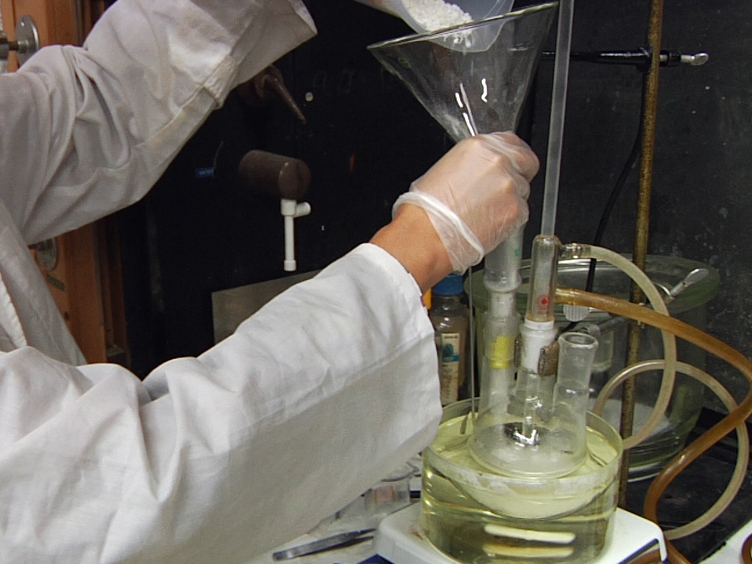